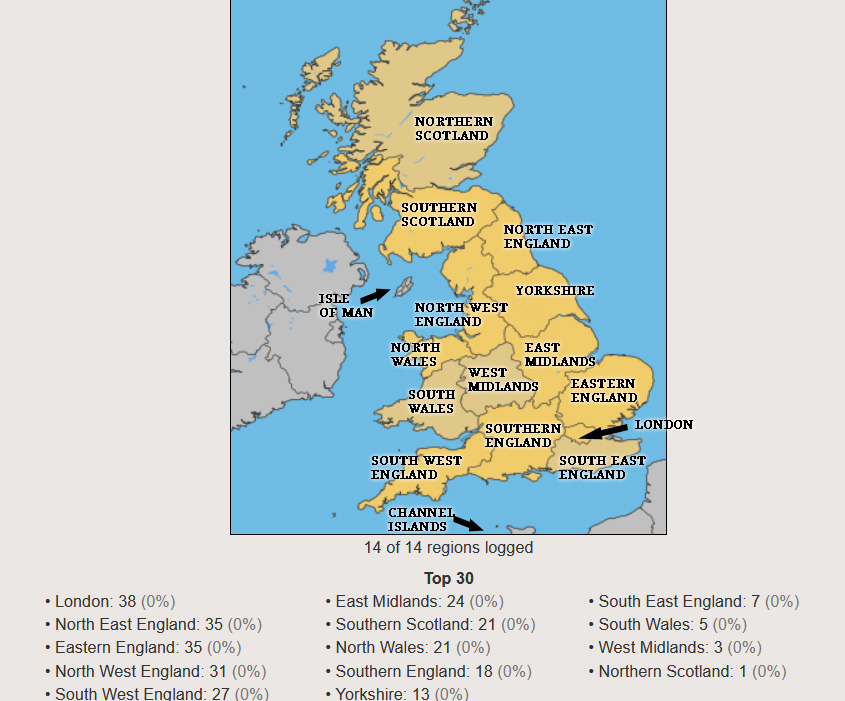 Over on the main blog pages I talked about geocaching occasionally and mentioned the occasional webcam plus the idea of visiting all the regions, but let’s be honest here...this whole trip was about geocaching. I wouldn’t have done it at all if I hadn’t made caching the primary point of it. With that in mind, I had four basic goals, and here’s how they played out:

Anyway...there weren’t nearly as many caching finds this trip as on the cross-country tour last time, mostly because I was having so much trouble with the hills and weather, and just didn’t ever seem to have enough time to stop and find 20 caches per day like before. There were some days it was all I could do just to force myself to pedal to the final destination, never mind stopping for caches. Furthermore, there were a few days where there just didn’t seem to be many caches at all to find, because I was mostly out in the countryside and just didn’t go near that many. If you were thinking I’d find 500+ finds again this trip, well, we’re both disappointed...but I still got a respectable showing. The UK is now the country I have the most finds in (after the USA), even beating out our neighbor Canada (for now), and I got over 100 finds in the various islands as well. Here’s the complete breakdown:

By collecting a couple of specific challenge caches on the way out of London, I was able to complete my 29th D/T loop. I managed to attend one event (missing another because I was on a ferry going past it as it was happening, and another by just a few hours). That was a community celebration at the end of Day 2, and was one of the highlights of the trip, actually. There were three new souvenirs claimed, one for Guernsey, Jersey, and Isle of Man (none for Sark) and since I got every region of the UK, if they ever decide to make souvenirs out of them like they did for Germany, I’ll instantly gain 12 new ones. There are also 10 lab caches not listed, 5 in the airport in Charlotte and 5 more in Chicago on the way home, because those did not fall on actual biking days.

Geocaching definitely made this a whole lot more fun than it would’ve been otherwise. All future trips I take will definitely include caching on the itinerary, you can count on that!