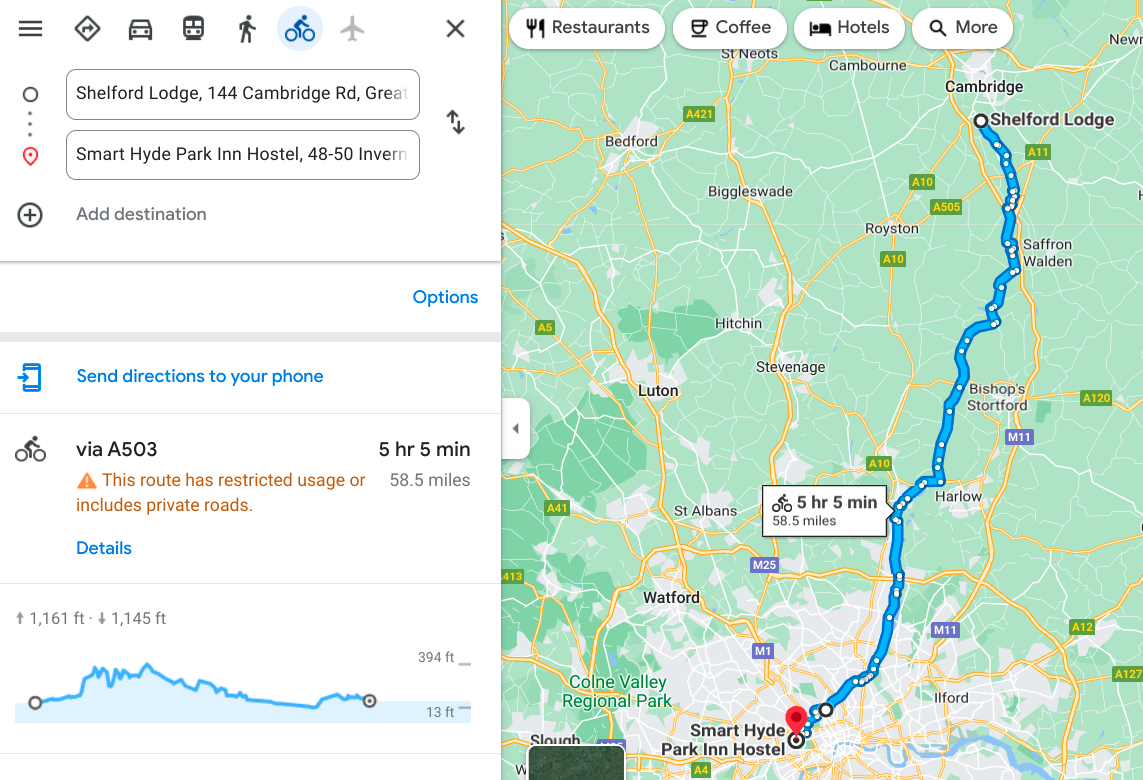 At last, the weather got over 70 degrees (F) and it was on the very last day of full-time riding. Well, at least it didn’t rain, right?

I slept in today, knowing this would be a relatively easy trip, and not in all that big of a hurry to get there anyway. It turned out that by riding a few extra miles the last few days I managed to arrange the last day to be just the perfect amount of distance. With the winds out of the west I thought I should take my time, but honestly they weren’t much of a factor...I only really felt them on a few rare occasions. Most of the time I just cruised along, not even having any trouble with the few hills I encountered. I guess after almost 4 weeks of riding you sort of get used to them, but just the same, I’m glad it wasn’t another 2k+ elevation gain day. I’d just as soon not encounter another one of those ever again, thank you.

So I started out with some town-to-town riding, which in England means a lot of cars coming up behind you and then having to wait to pass until no one’s coming toward them (since they don’t believe in shoulders on their roads here and you only get bike lanes occasionally.) After about a quarter of the day, though, the route moved onto country roads and that’s where most of those hills were (see the elevation map). Luckily for me there were lots of geocaches along here too, something I haven’t seen much of in hilly areas, so each climb could be mitigated with a stop for a cache. That worked out really well and I never really got tired at all. I did, however, break yet another spoke on one of the climbs...but this one was on the front wheel, my first of that sort in quite some time. I don’t put a lot of weight on that wheel so I’m not sure why a spoke went out in this particular instance, but since there’s not much stress there I just rode along with it like that and didn’t worry about trying to get it fixed on the road. It can wait until I get home and go back to my regular bike shop.

Anyway, once past the climbing part it was some nice easy descents until I got close to London whereupon the ride became a river path (mostly gravel, sometimes very bad gravel) along the Lee River almost all the way into the city. Early on this was pleasant but after a while it got crowded with walkers and other cyclists and really too narrow for any pair of either to pass easily. Plus there were numerous parts where they had cobblestones or uneven stonework making riding very difficult and annoying. Still, I missed the lack of traffic as soon as I got into London proper and had to deal with the insane numbers of cars, scooters, and other cyclists all over the place.

As I got near my destination the route dropped me in Regent’s Park which was also very quiet and pleasant, sort of an oasis away from all the city clamor. I enjoyed that as long as I could and then fought through the traffic to the hostel I’d chosen for tonight’s stay. Here I found out they actually had an age cap of 45 years old (which was NOT in their entry on booking.com) but since I was a new client and unaware they allowed me to stay one night with a waiver, for which I was quite grateful. I wouldn’t have enjoyed making it all the way back here after 27 days of riding and then get kicked out of my lodging on a technicality! The only other downside was very limited storage space, meaning I’ll be sleeping with some of my luggage, and there was nowhere to put my bike, so I have to risk keeping it locked up outside. But there’s an electric bike worth 5 times what mine cost locked right next to it, so if someone trusts their E-bike out there, I suppose I can leave mine out there too. (crosses fingers and hopes for the best)

Anyway, tonight’s batch of photos includes several “last of this kind” types because I’m done with riding around the countryside and after this everything else you’re likely to see will be in the city. Here we go... 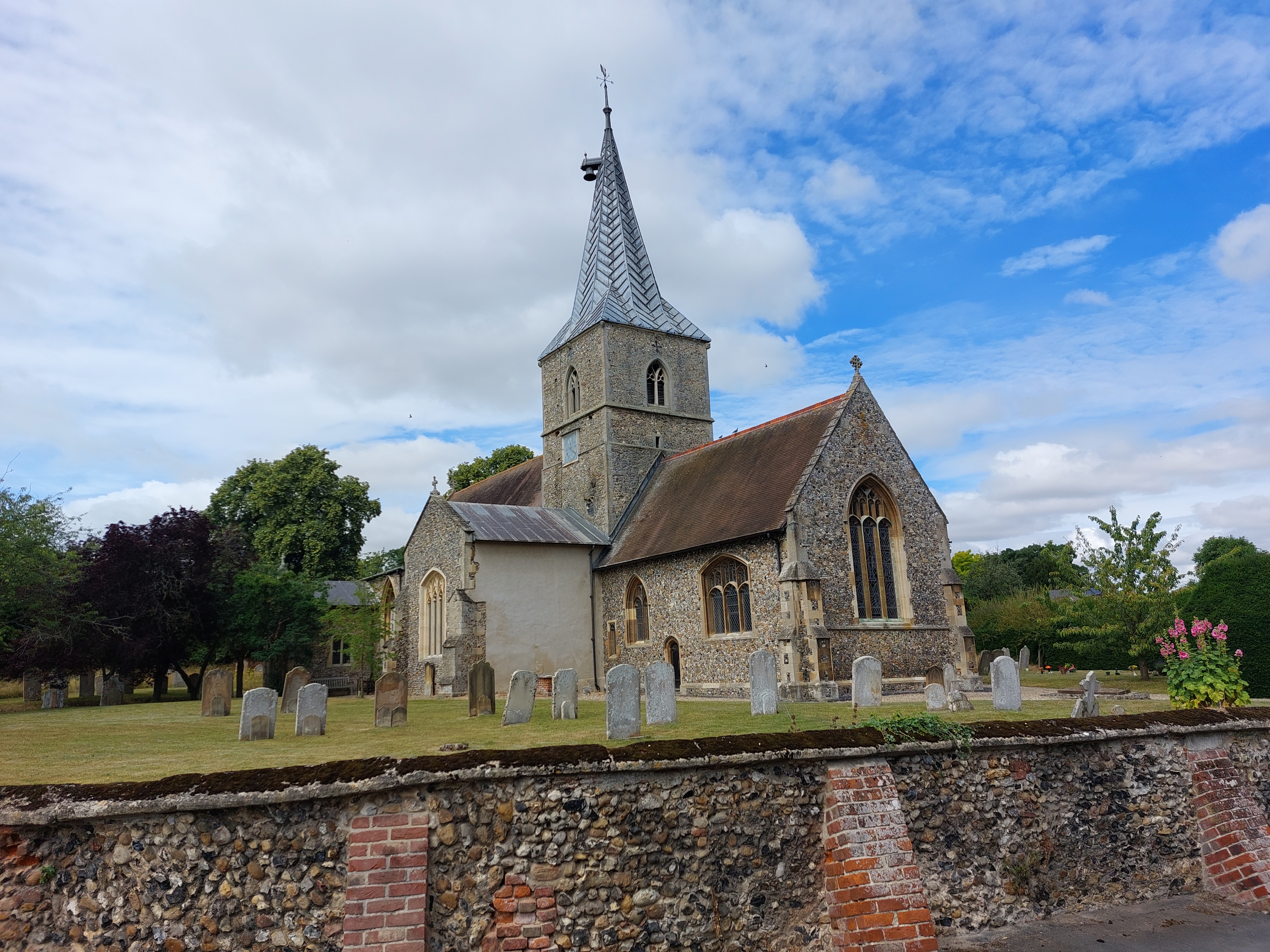 One of the last “old church” photos you’ll get this trip unless I see some really cool ones in London. 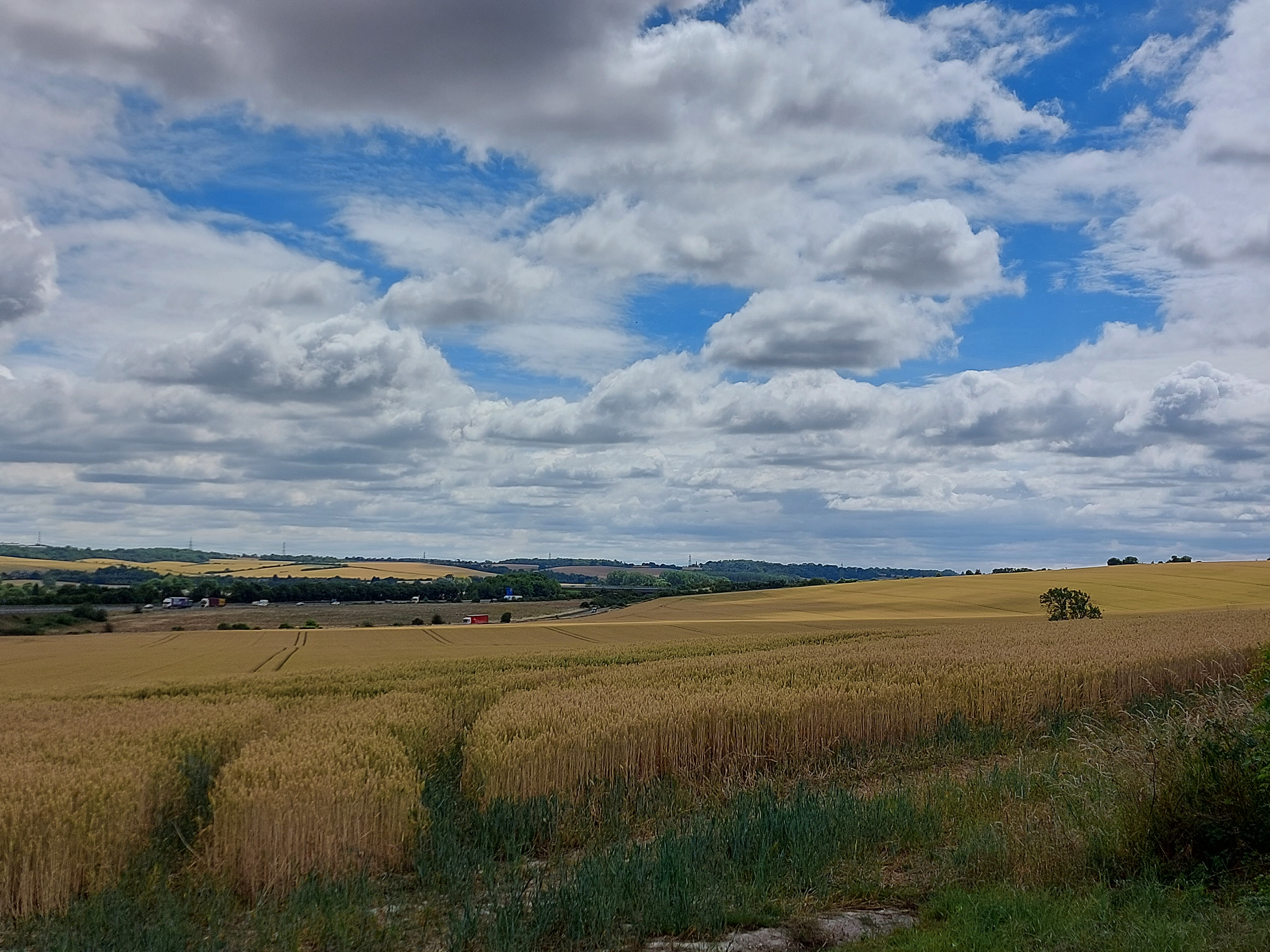 Another countryside view, with more those oats or whatever they are. The highway in the background is the M11, which I followed most of the early part of the day. 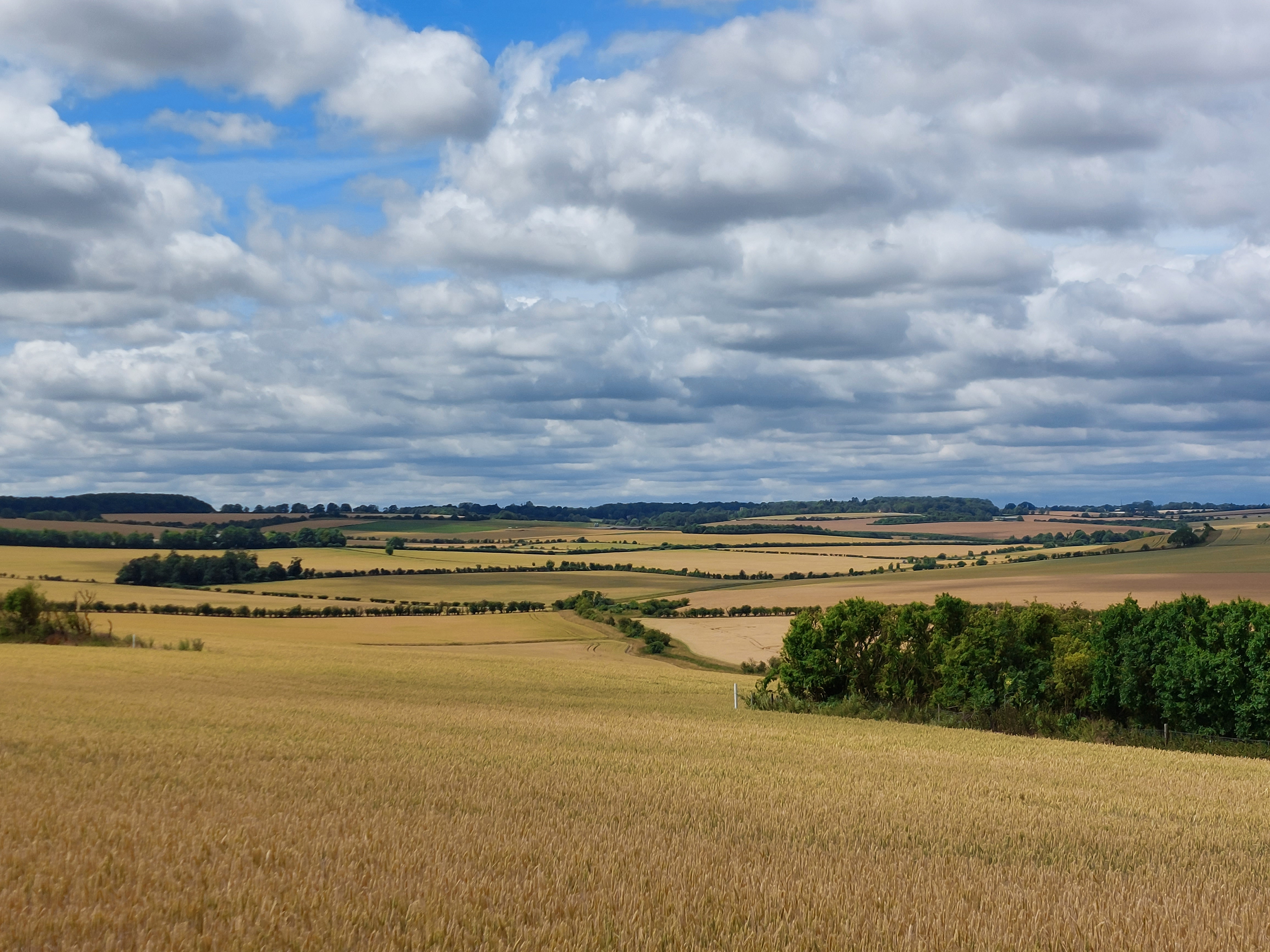 I’m going to miss these views. 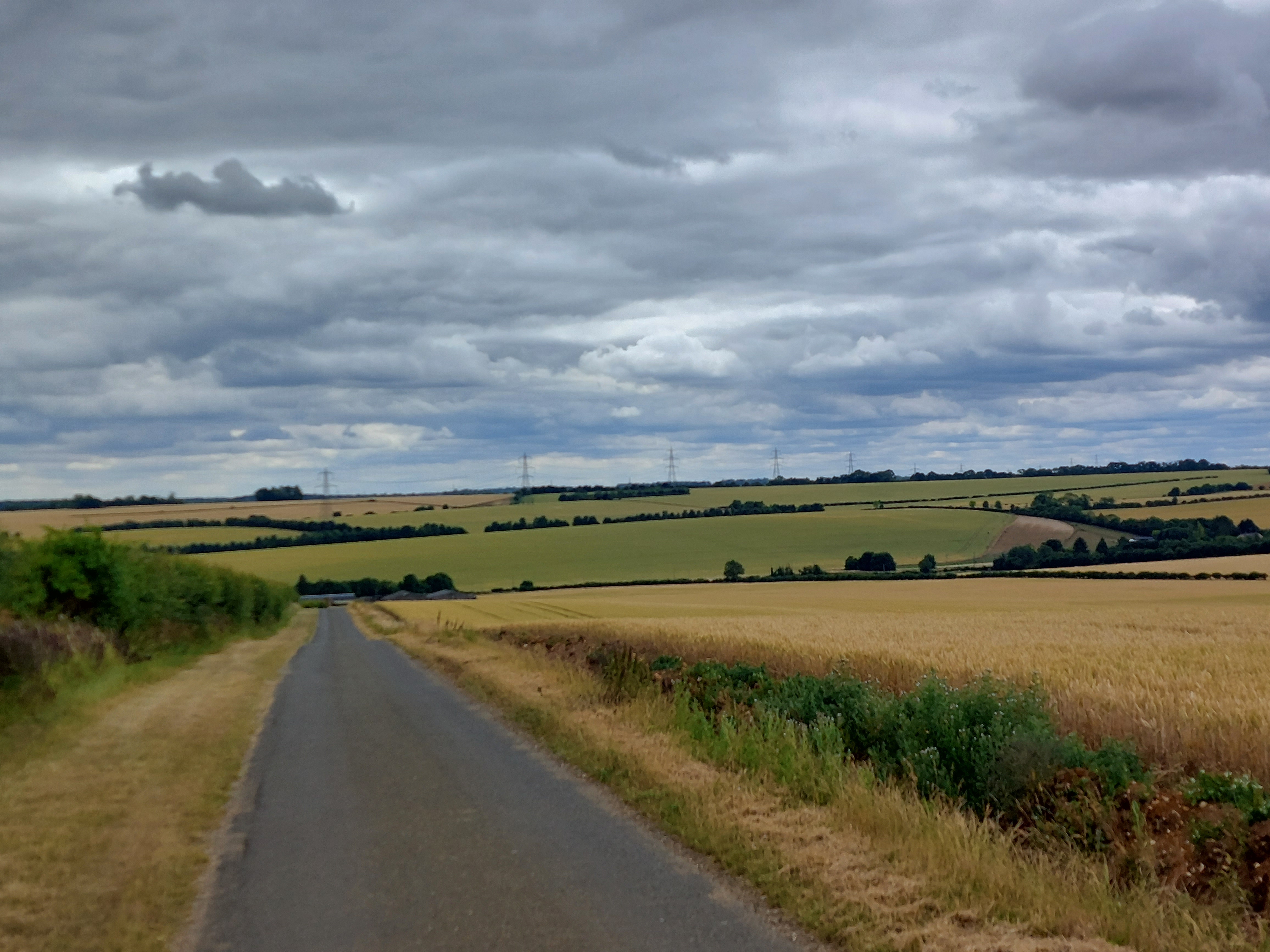 Okay okay one last scenic farm country view and that’s the last one this trip. 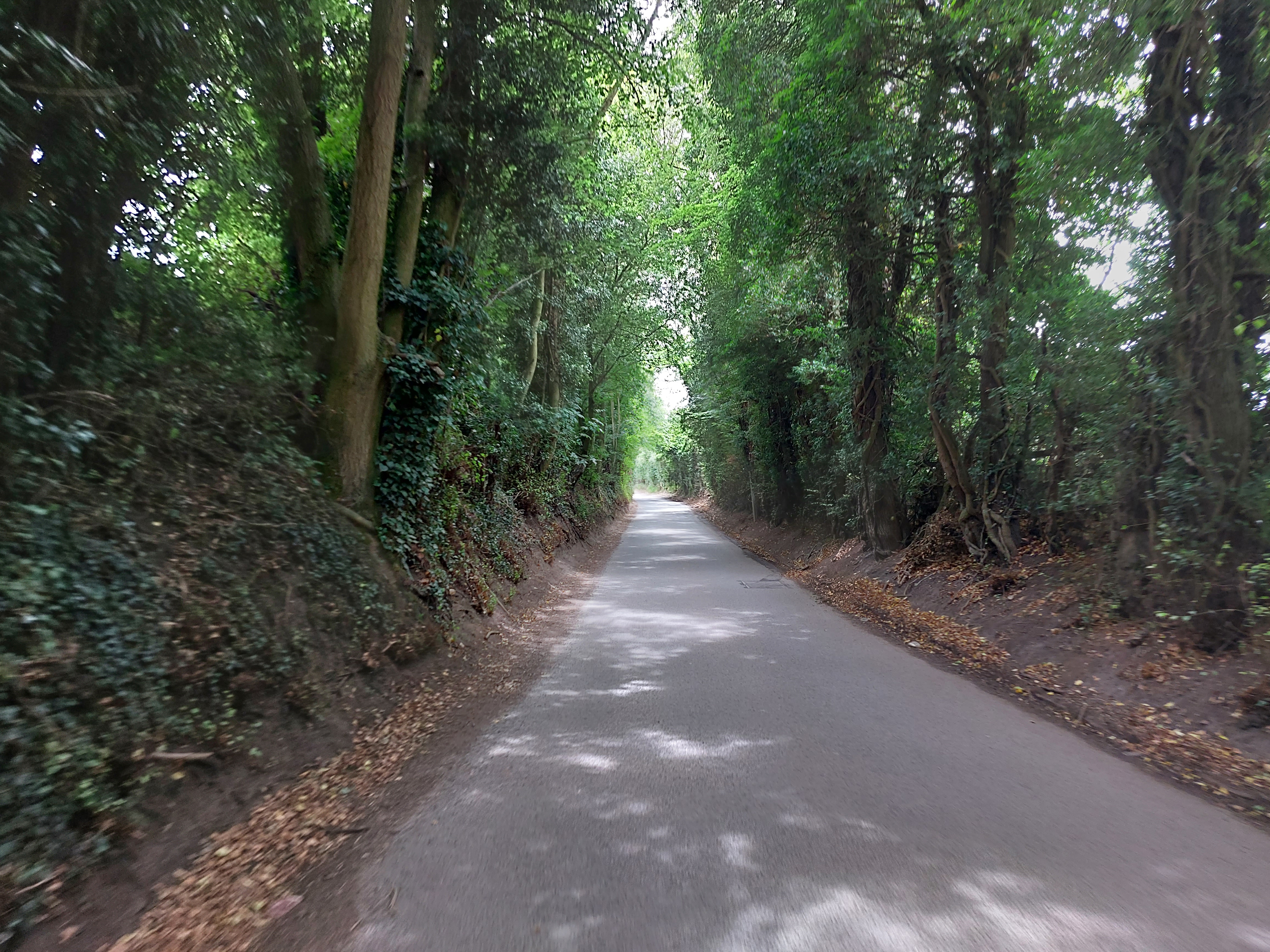 I got to enjoy roads like this for part of the day. Sadly they got worse the closer I got to London. 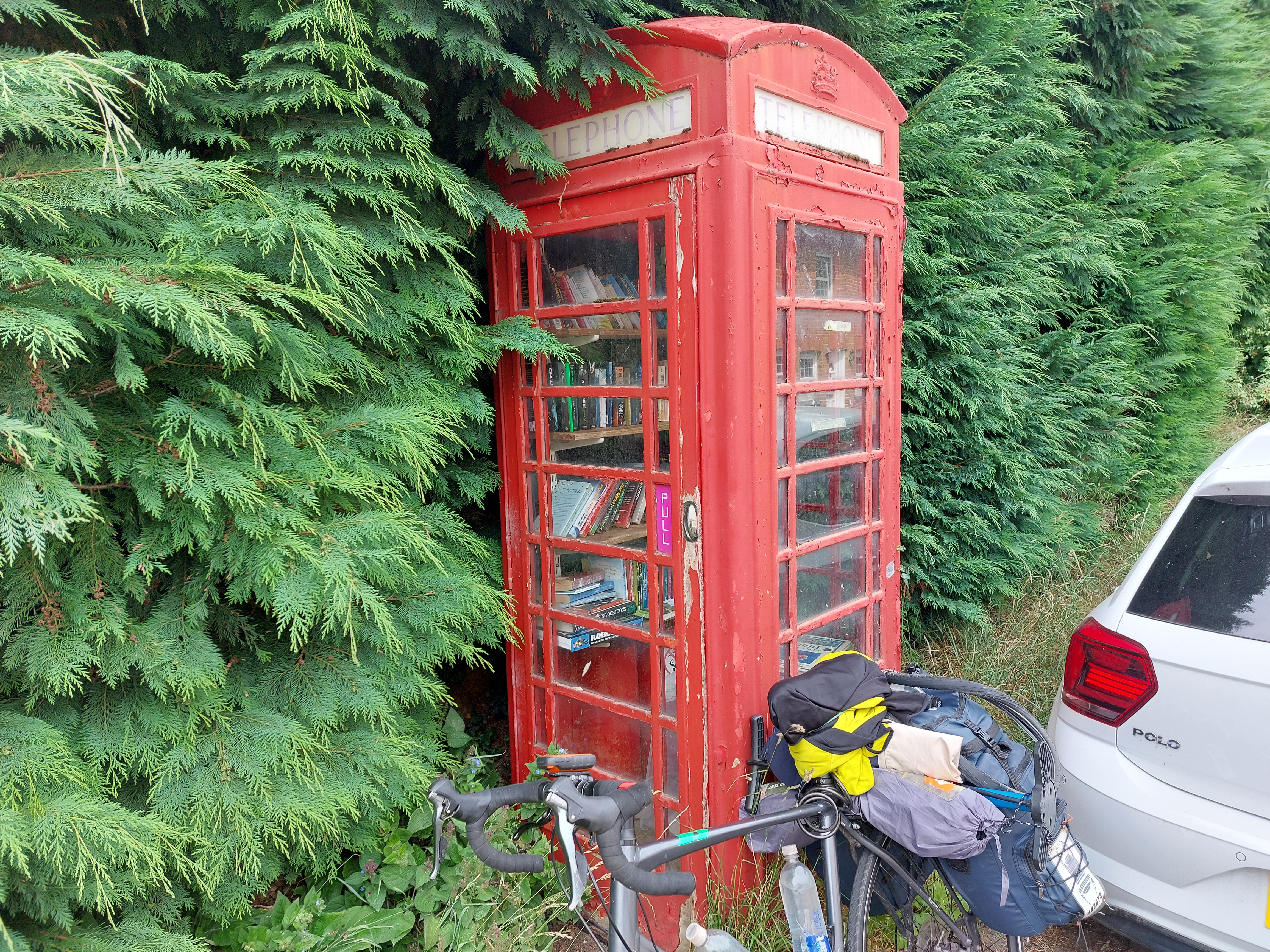 I thought this was pretty cool. This town converted their old phone booth into a little free library. (Side note, look at how I’ve wrapped my heavy bike jersey around the seat for extra padding.) 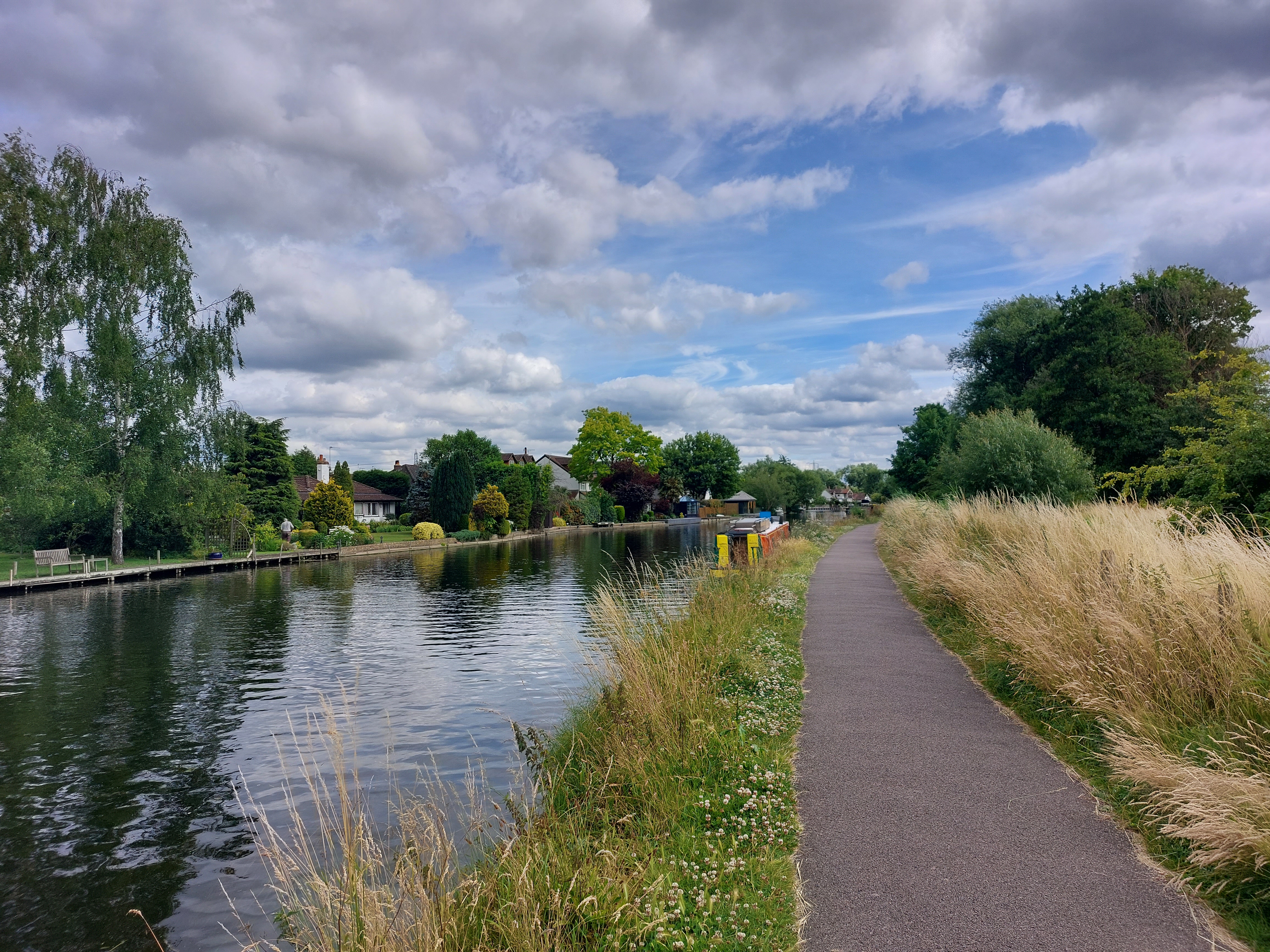 Now the ride moved onto a long stretch along the Lee River, which was crawling with houseboats and other canal style boats like you’ve seen several other times on this trip. Here at the beginning, the path was pretty nice, but it got worse. 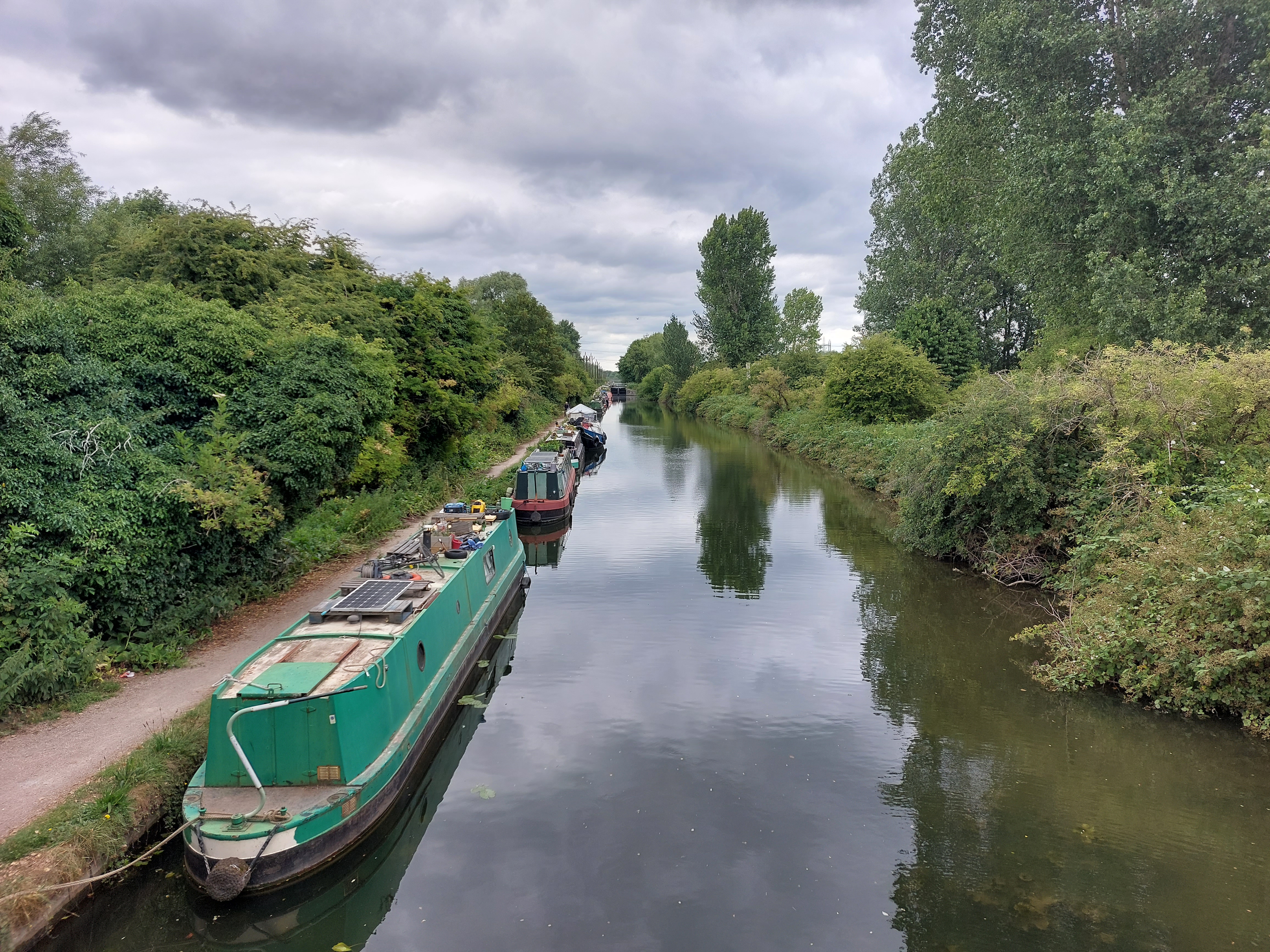 A better view from on a bridge crossing. Some of those canal boats looked like they’d been sitting idle for years. 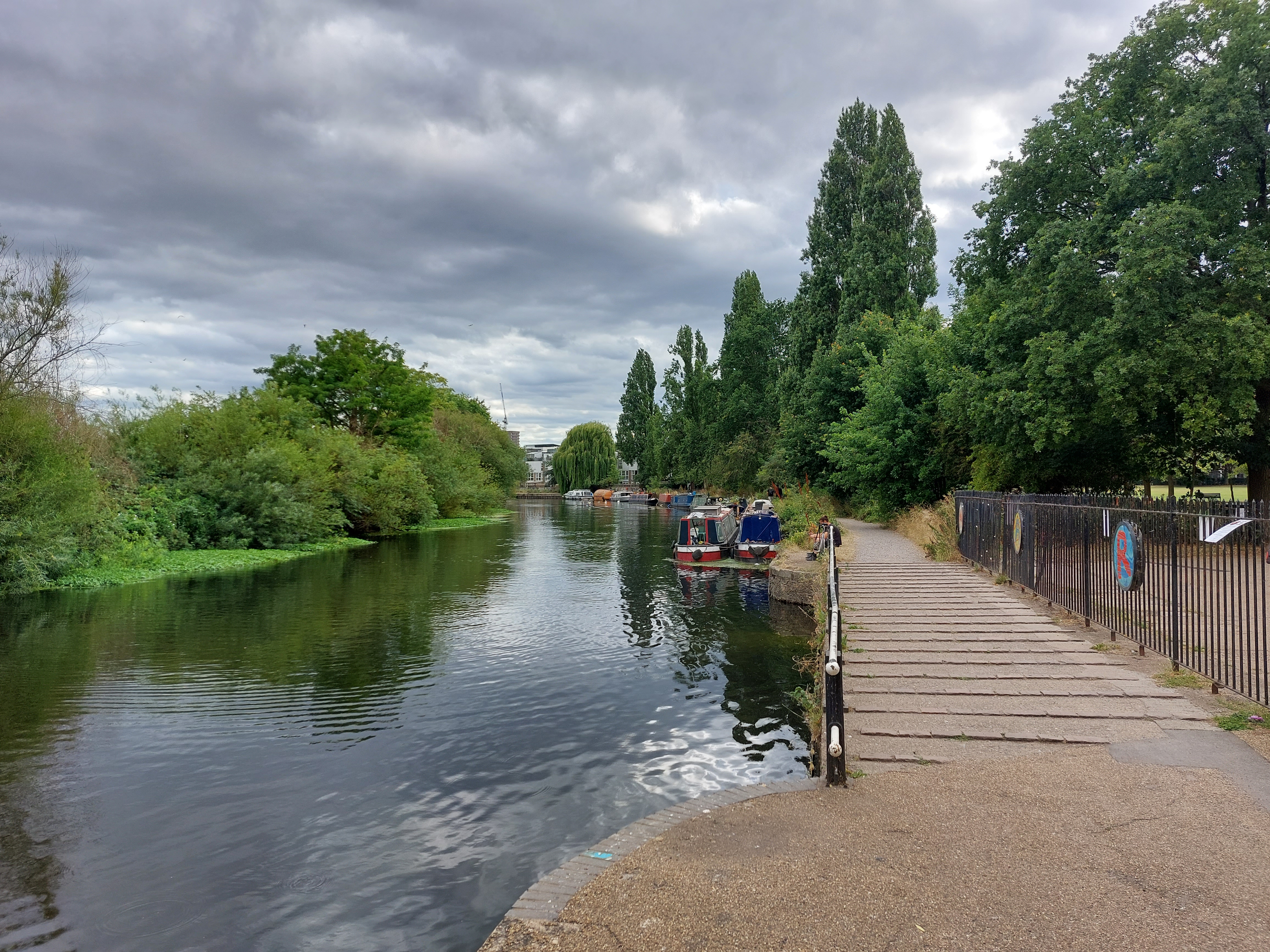 Here’s another view...sometimes the houseboats were docked next to each other for some reason. Also notice the irregular surface of the path, and the bumpy segments that were there for no reason at all (sigh). Luckily for me, this is the spot where I left the river behind and didn’t have to worry about that any more. 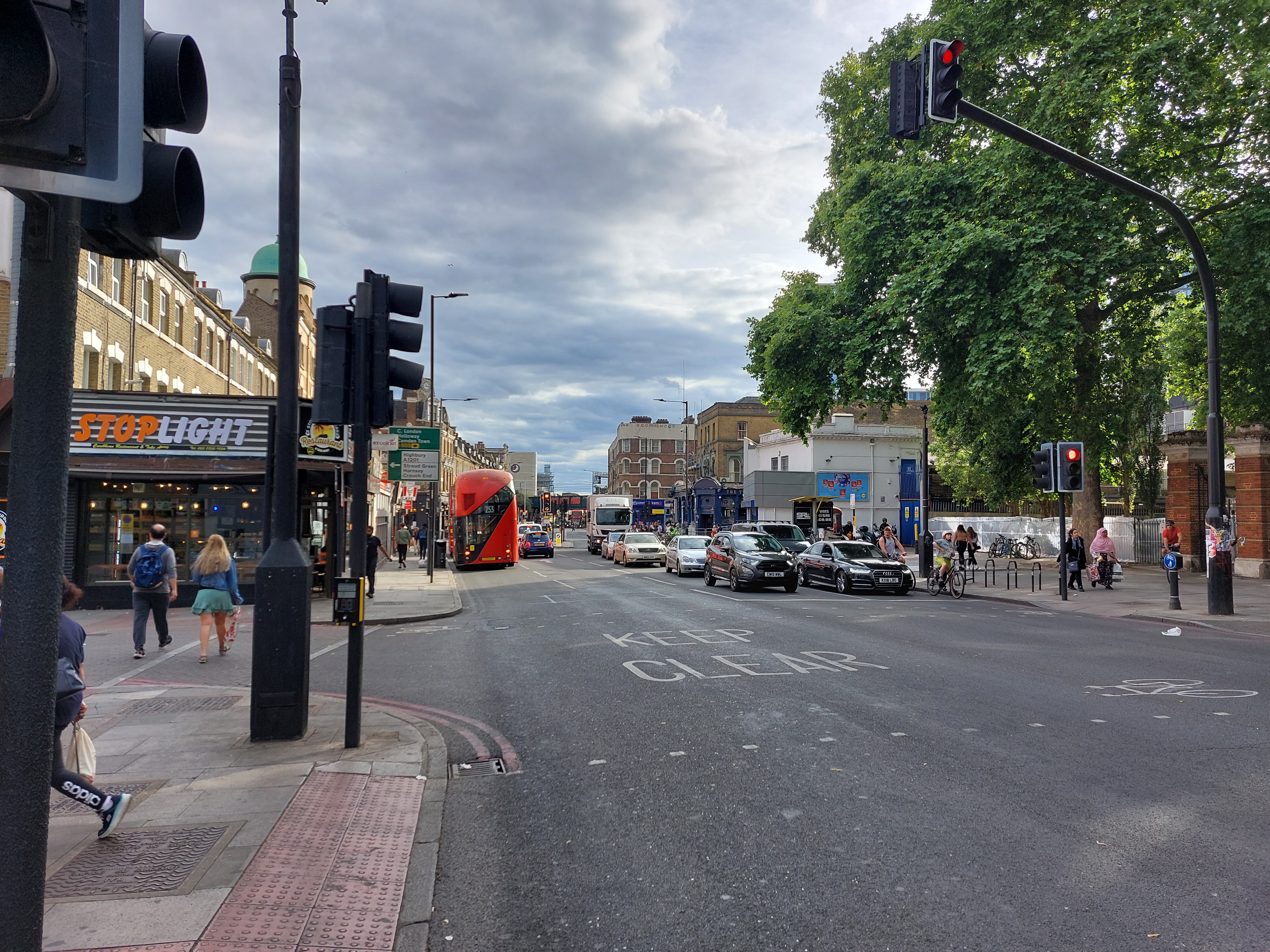 So then it was back out into London streets. Looks pretty scary to ride a bike on, huh? But you can see other cyclists over there on the right side, and they were everywhere, so it really wasn’t all that bad. Plus the bus lanes (like the one I’m in right now) allow bikes but not cars so quite often I had a lane to myself. 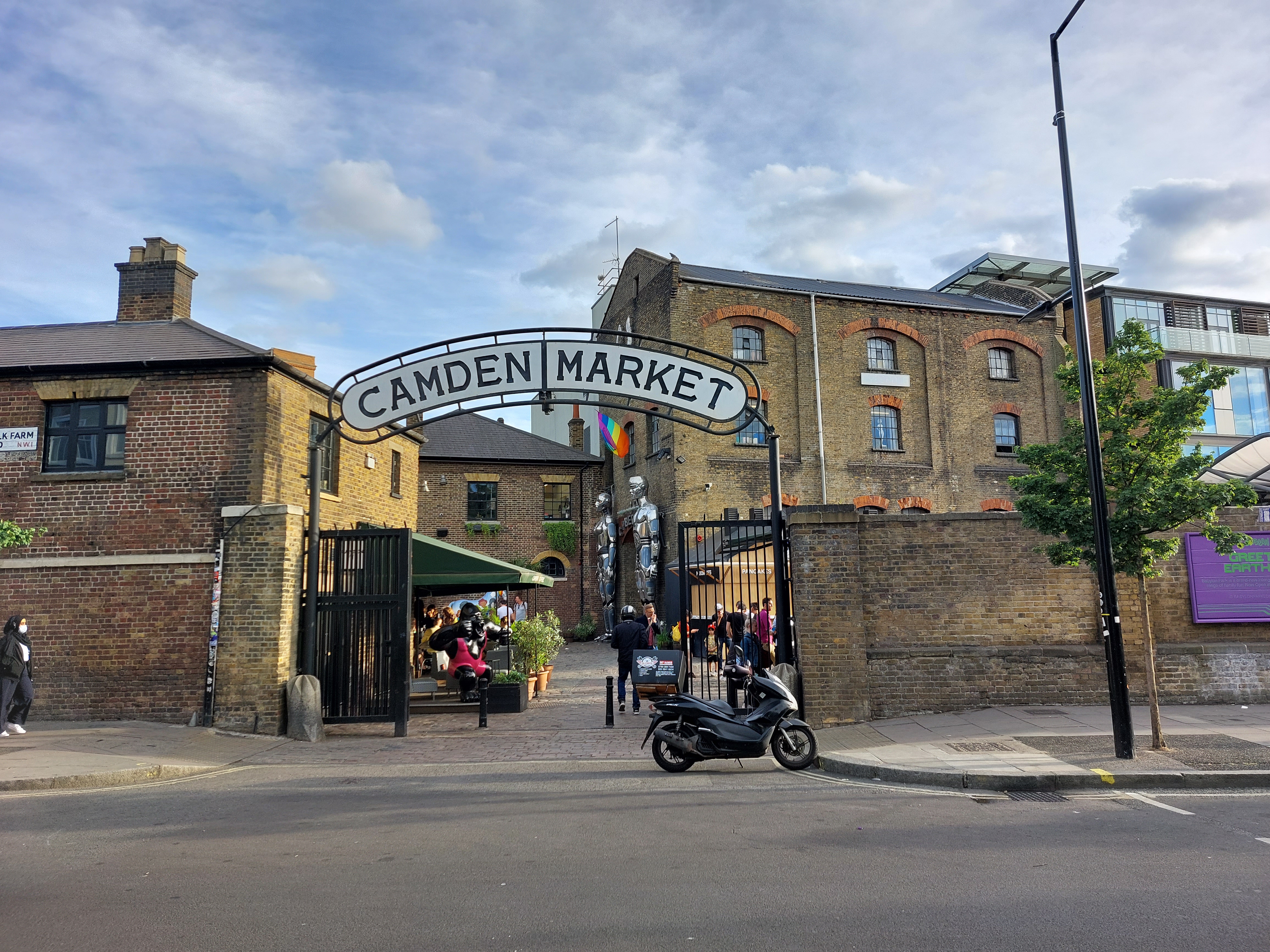 This place was really quite busy, though you can’t tell from the photo because the crowd is over behind the wall to the right. 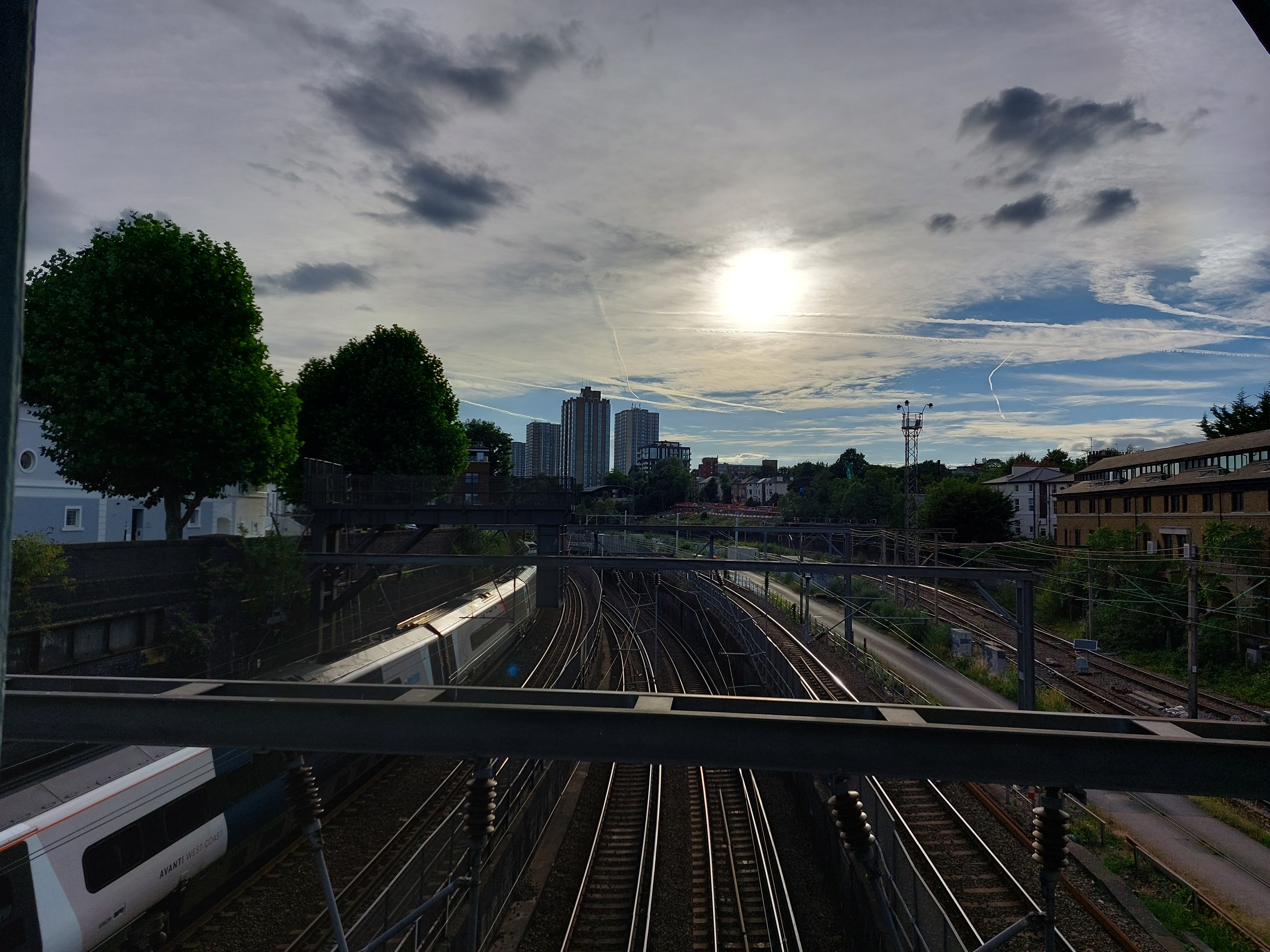 A view looking out at part of the city from a train bridge (bonus, a train was going by at that moment). They do love their trains in this country. 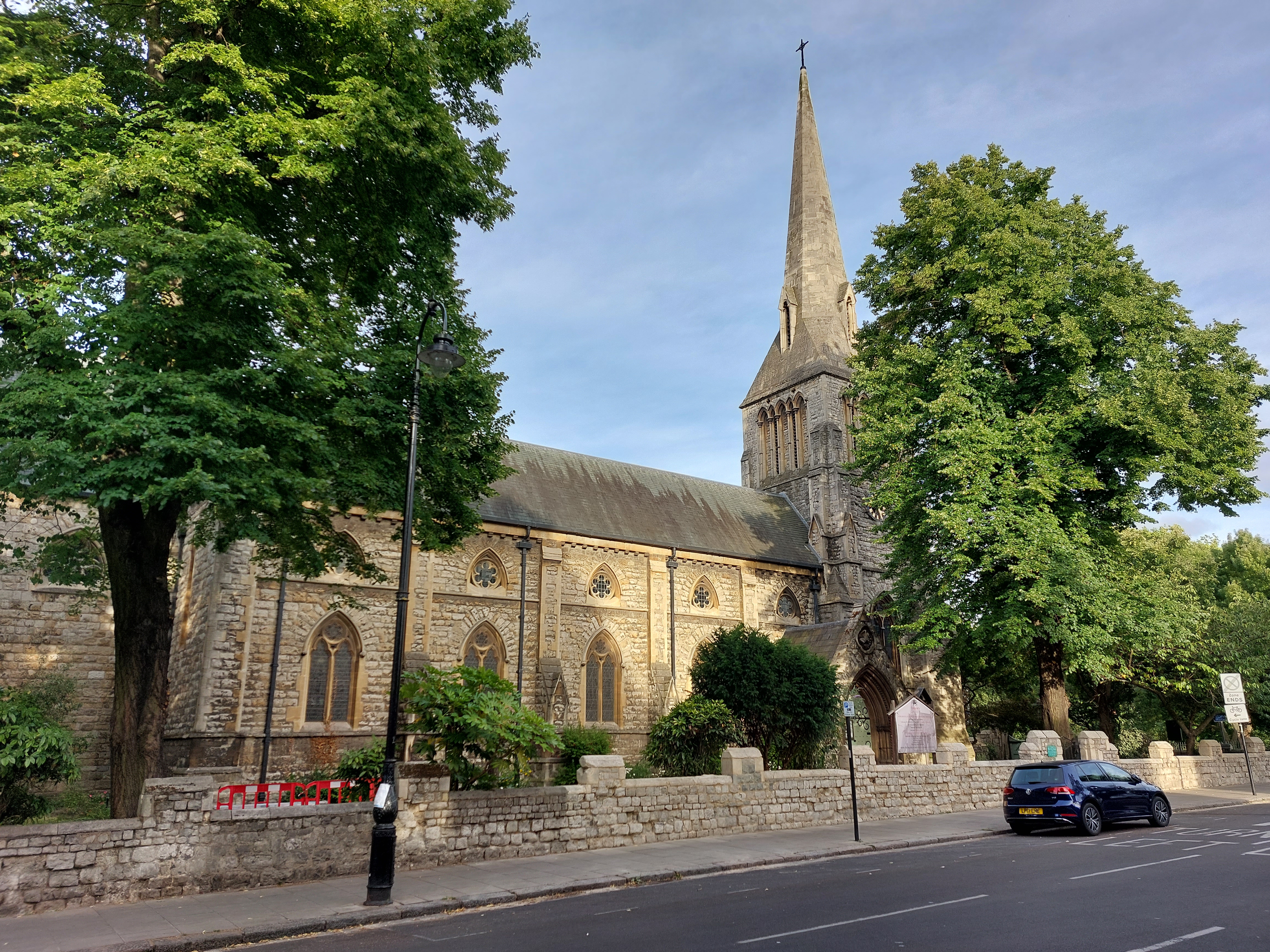 Guess I wasn’t done with the church pictures after all... 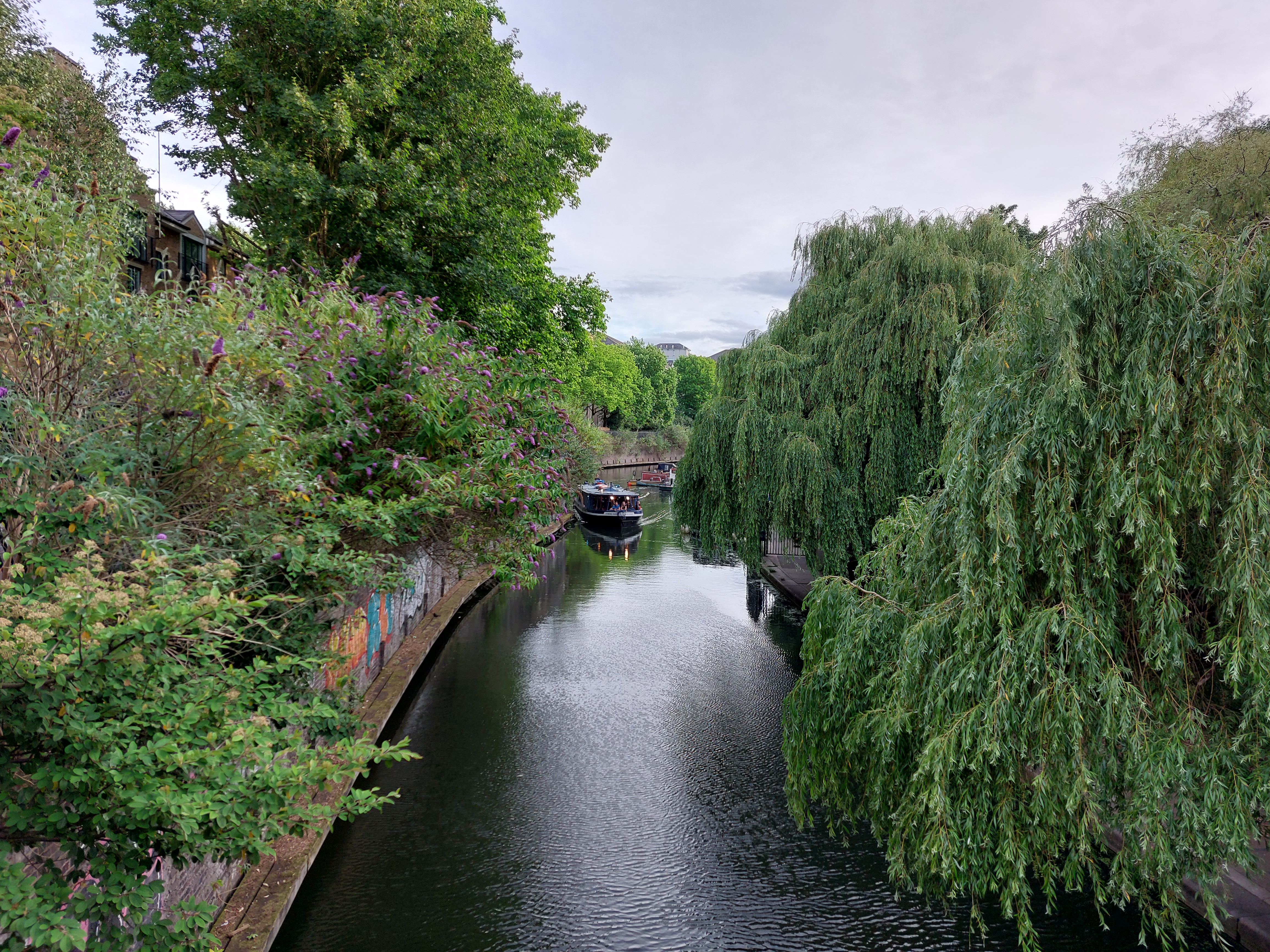 Or the river pictures. This is from that park I mentioned earlier. That boat you see is a dinner cruise...as it went by I could see people eating some kind of buffet on deck. 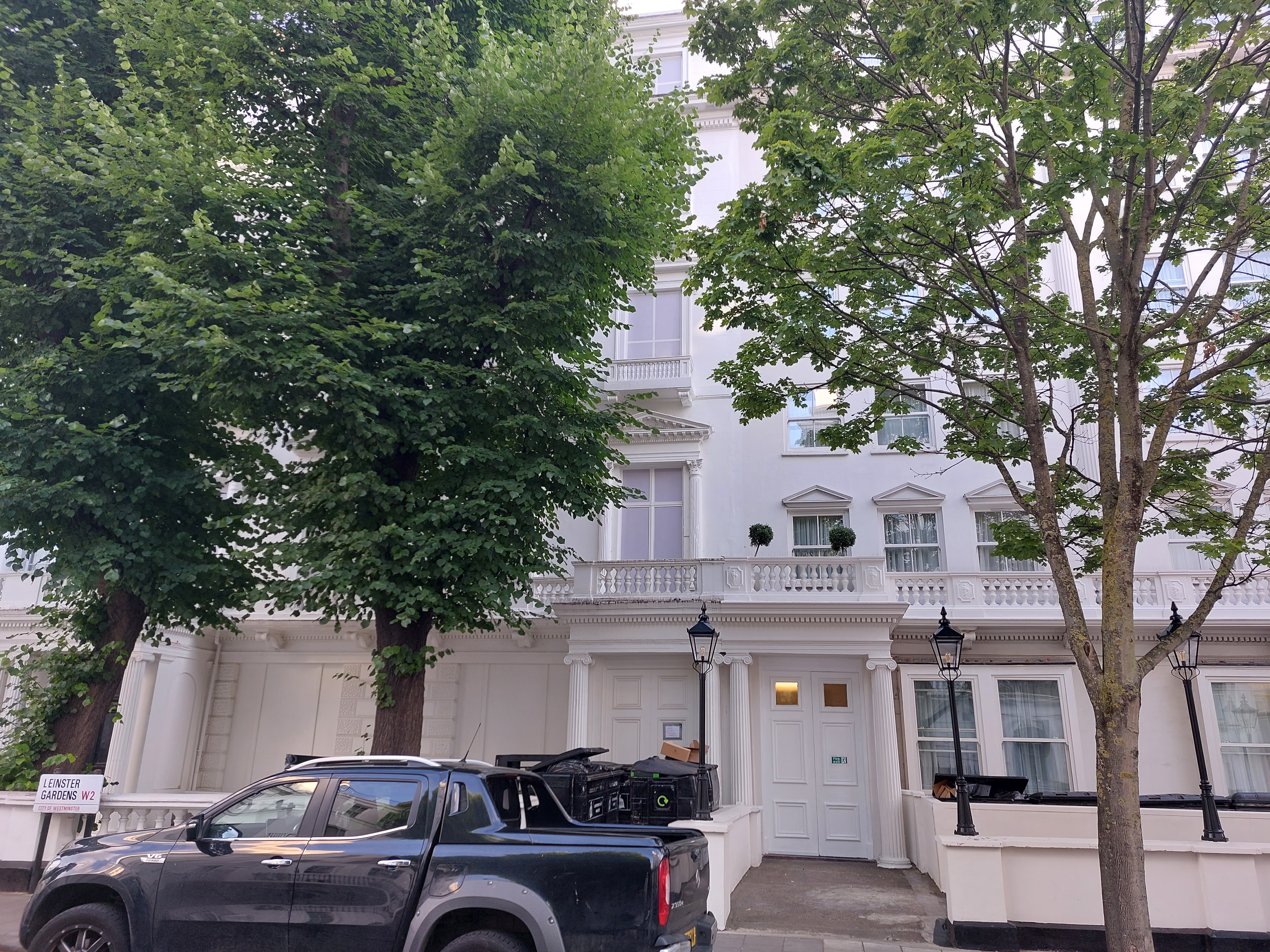 Now here’s a cool spot that I never would’ve found without a geocache to point me here. You see this relatively ordinary looking (if a bit upscale) building? Well, the left half of it is completely fake. Those windows that look whited out are a complete facade. Actually, there’s an underground train running right along through here and that structure is built to hide a whole bunch of equipment and heat/steam ventilation. You would never know it was fake if someone didn’t tell you. 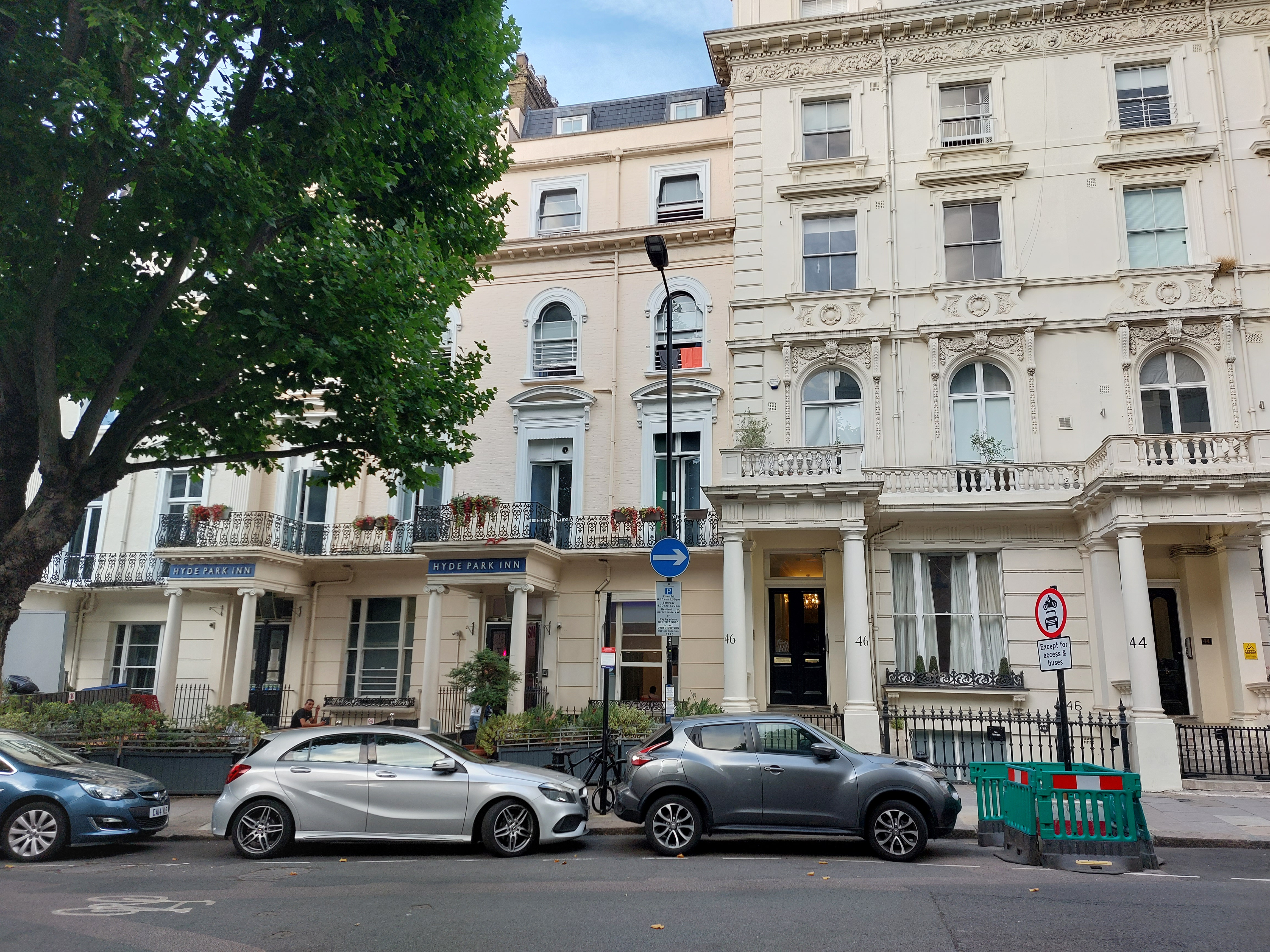 And here’s my hostel, the Hyde Park Inn. The electric bike you can see between the two cars marks the spot where I later locked my own bike. Let’s hope it’s still there tomorrow when I wake up. Although if someone does steal it, they’re going to have to fix that spoke. Ha! 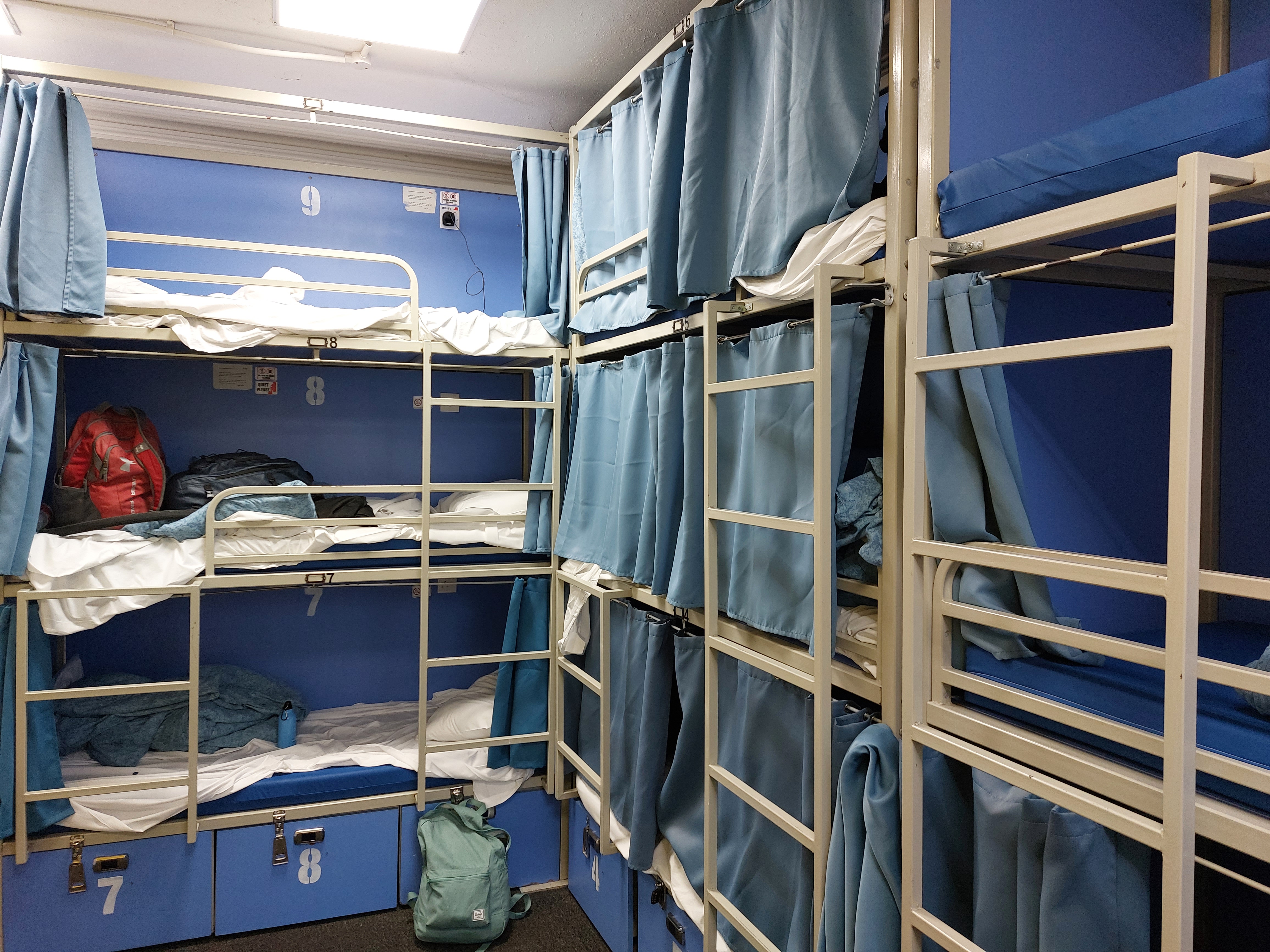 Here’s what the hostel looks like. I managed to shove everything except the big bag and backpack into my locker (#8) and I get to squeeze into that middle bunk on the left. At least this room has its own bathroom so when I inevitably have to get up in the middle of the night to use the facilities, I don’t have to go very far.

Anyway, so one day remains in my 4-week trip. Tomorrow I get to move to my last hotel, then deal with getting the bike box back from storage. After that I should hopefully have time for some more touring so we’ll see what kind of photos I can come up with for you tomorrow.