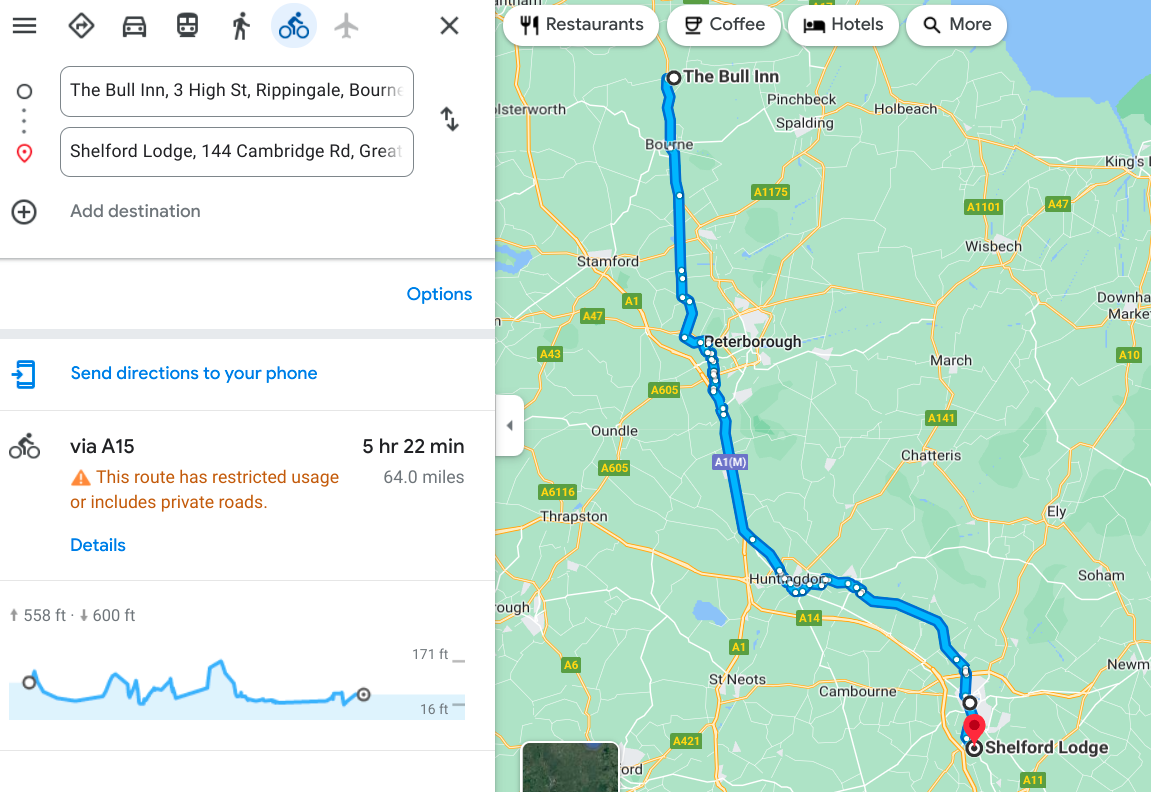 Bourne to Cambridge
Miles: 65
Terrain: There were a few short climbs but mostly flat
Weather: Almost but not quite warm, sunny, moderate west winds (yet again)

First things first, today’s primary mission was to fix the broken spoke (my third of the trip). This time, I had the benefit of a night’s stay with good internet to help me locate the best possible choice of bike shops, instead of trying to come up with one in the field. I got lucky the first time and there was a shop in the next town. The second time, in the pouring rain, I had to find a bus stop for cover and search for a bit, then veer slightly off course to get things taken care of. This time, I had hoped to find something in Bourne (the center of which was 5 miles south of me) but no luck. However, there was a shop almost directly on my route on the edge of Peterborough, 19 miles away. I figured that would have to do and set off about 10am.

The first part of the day was mostly pleasant, with a crosswind that wasn’t too bad, just a little chilly (about 62F degrees) and a good stop in Bourne to pick up food supplies. The road was crowded but as usual people just went around me, because here in Britain bikes are an accepted fact of life, unlike back home where most people would just as soon keep bikes off the road at all times. (Not that I’m bitter or anything.) I made it to the bike shop in pretty good time and while they fixed my spoke I had lunch. Oh, and the question of whether or not I would risk riding my worn-out rear tire all the way to the finish was rendered moot because I figured since they had to take the tire off anyway to fix the spoke, they might as well just swap on the new tire at the same time and save me the worry and risk. So the spoke got fixed and now I can finish out the ride not worrying about whether my tire will blow up at any moment.

Anyway, after that, it was another 15 miles or so south and then I could head southeast for a bit and turn that crosswind into a tailwind. After meandering through Huntingdon (including yet another “adventures in routing” from Google Maps) I emerged onto the best bike path I’ve seen this trip, a 14-mile pleasure along the “busway” between Huntingdon and Cambridge (more on that in the photos section). I stopped for a few geocaches here and there but mostly kept going because I had to check into this hotel tonight before 8:30pm (sigh) but also wanted some time to look around Cambridge first. The town did not disappoint, with some extremely gorgeous university buildings and architecture...well worth the extra hour and a half I spent wandering around. Eventually, though, it was time to head for the hotel and I got there with half an hour to spare, almost exactly at 8pm, which is when I told them I’d arrive when I filled out their online check-in form last night. Then the usual shower, dinner, and work on this blog before bed.

So thanks to Cambridge I finally got another decent day of photos prepped, so let’s get started... 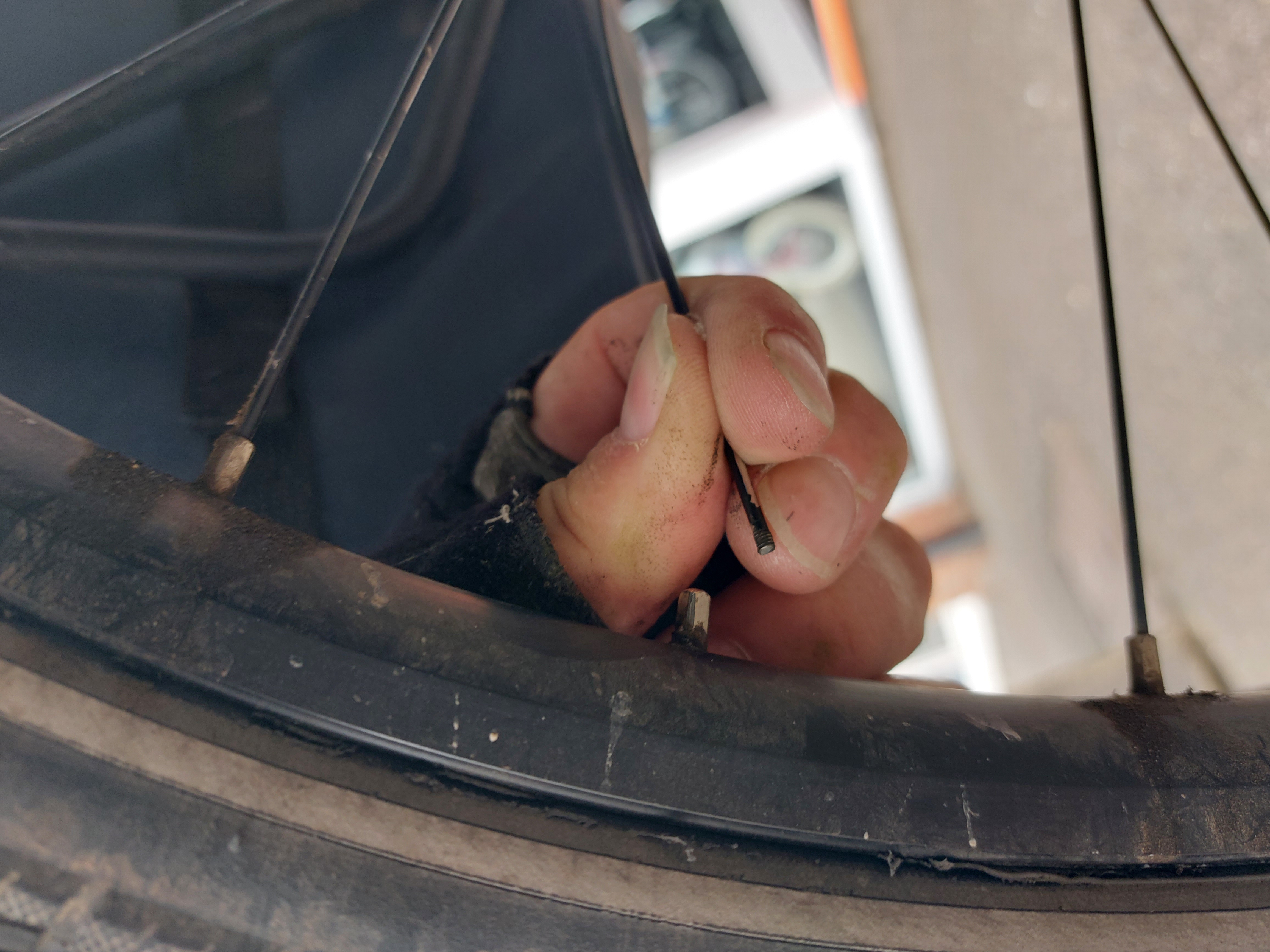 First off, let’s get that spoke fixed...here’s the broken end of it, the rest is down inside that connector piece where it snapped off. All three of my broken spokes happened this way (they can also break at the hub, or snap in half). I’m told when they break off here it’s a sign of too much tension on the wheel...not a big surprise with all the weight I’m carrying. 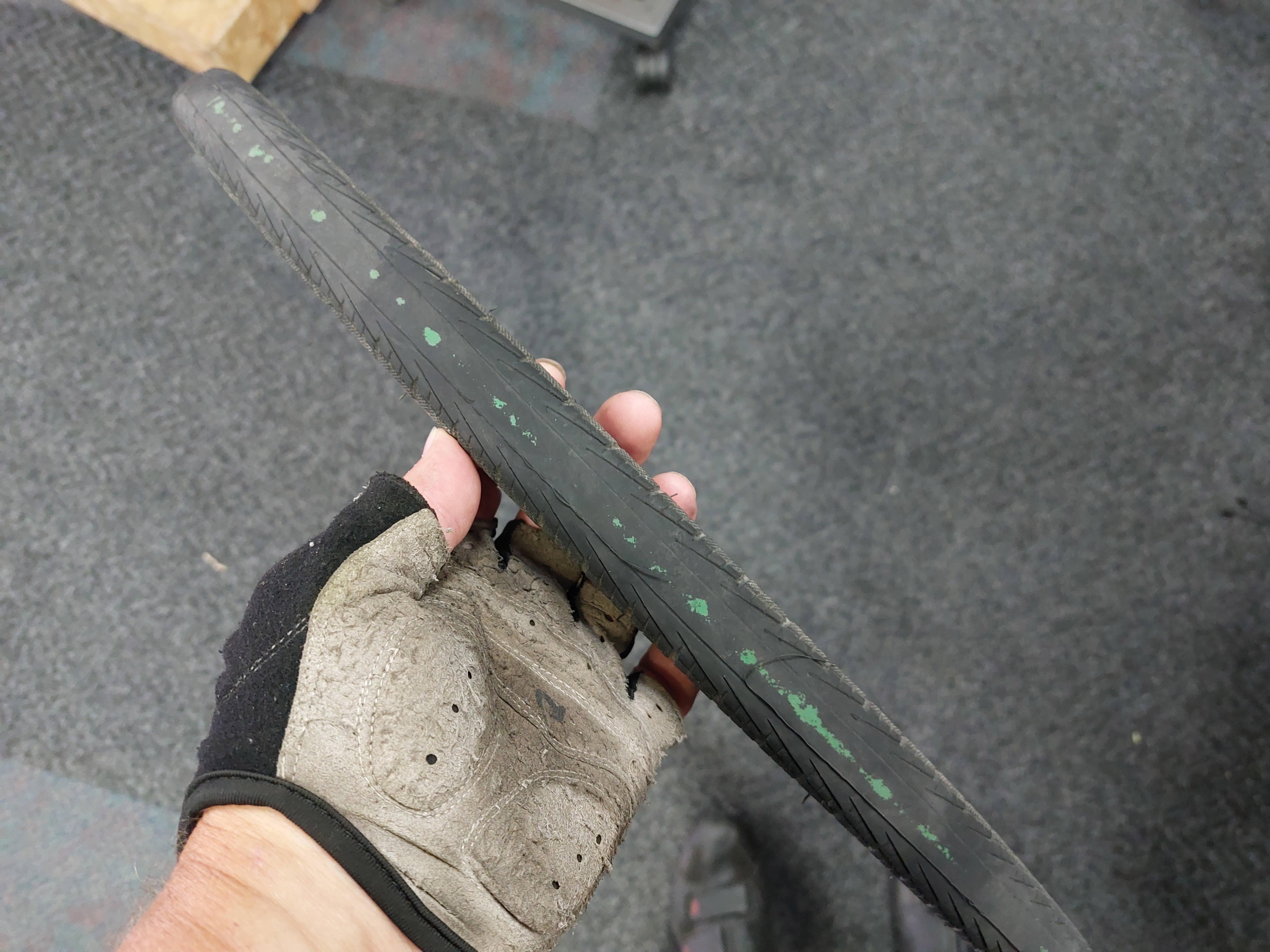 In case you’re curious, here’s how much had worn off the tire in the 3 days since I first noticed that one little spot. I probably could’ve made it to the end of the ride on this, but I’m just as glad to not have to worry about trying. 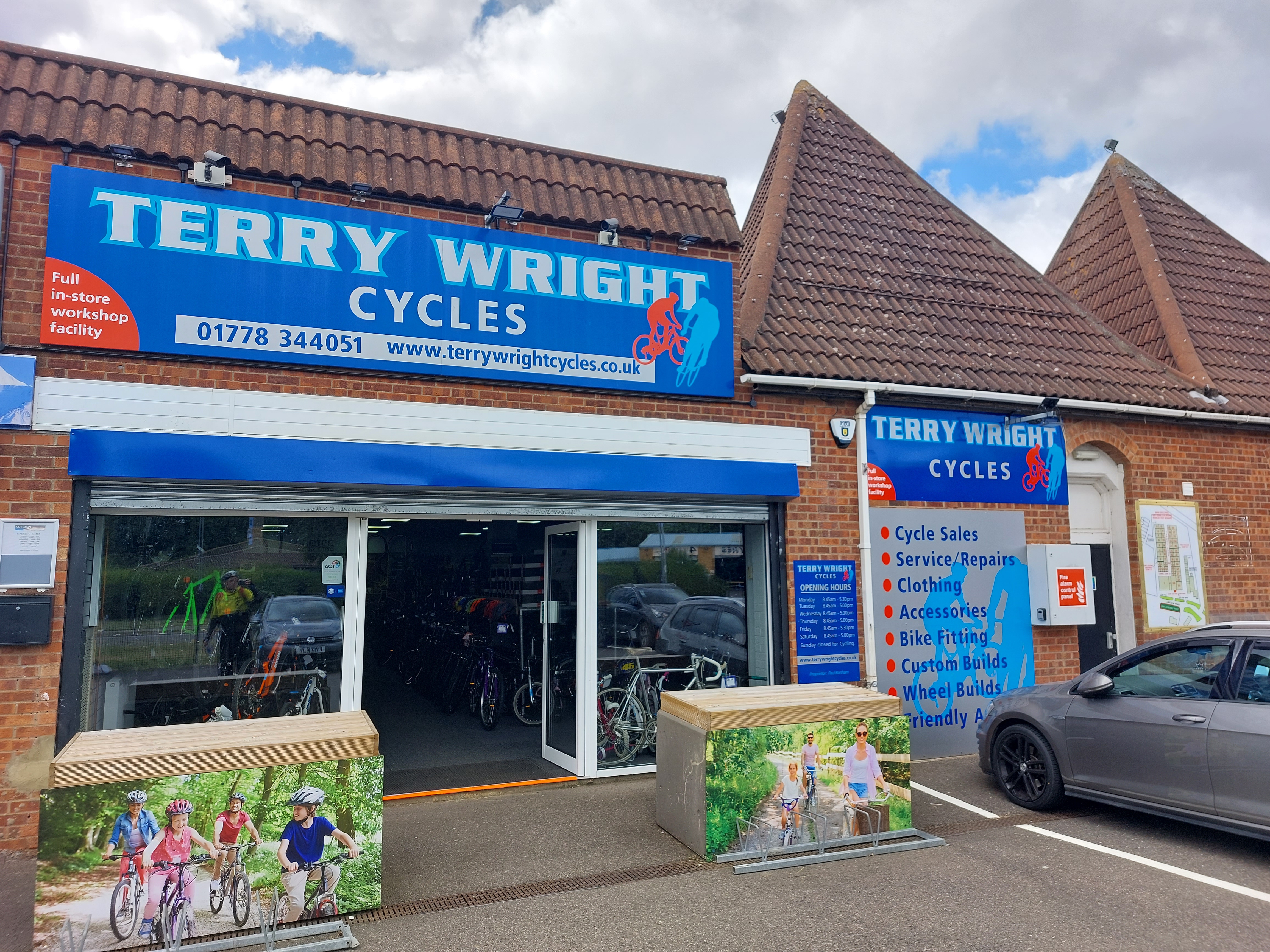 And as usual a shout out to the fine folks at this bike shop for helping me get back on my way quickly. I think I was lucky to find three shops along the way that could all spare the time to solve my problem for me without an appointment or a long wait. 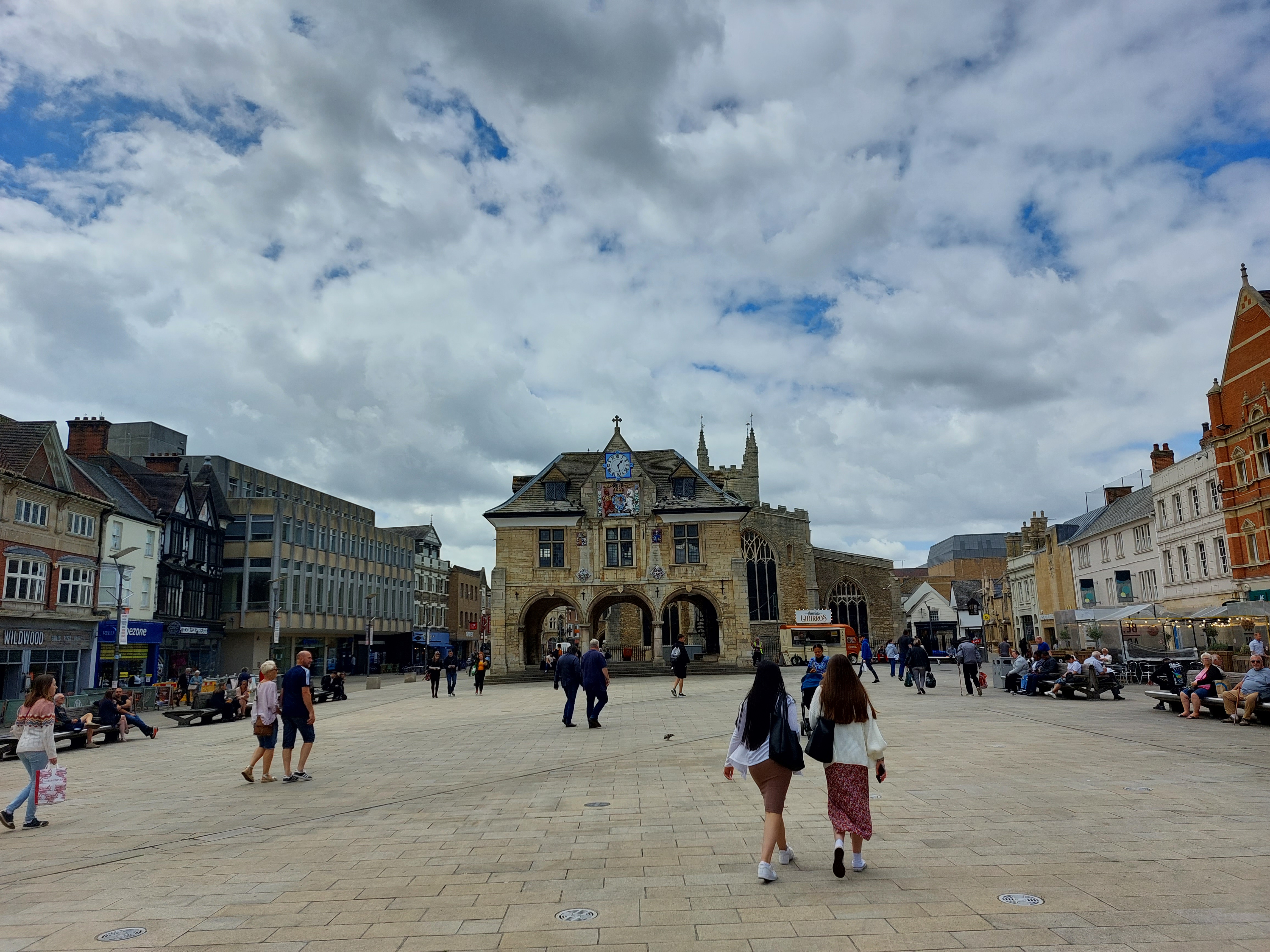 Back on the road, the route took me right through the middle of Peterborough, and this is the town square. 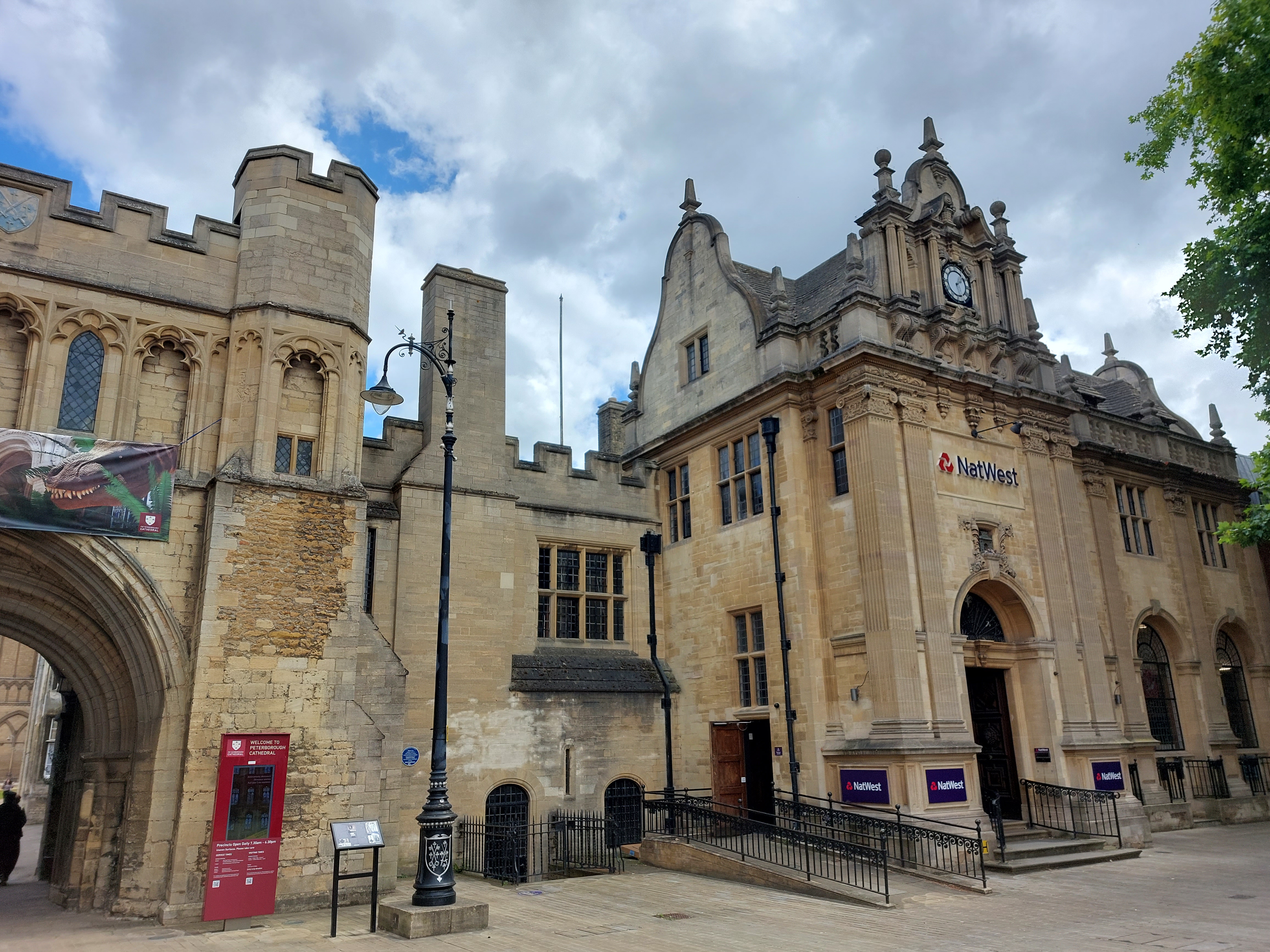 More classic architecture in Peterborough. The next picture is taken on the other side of the arch to the left. 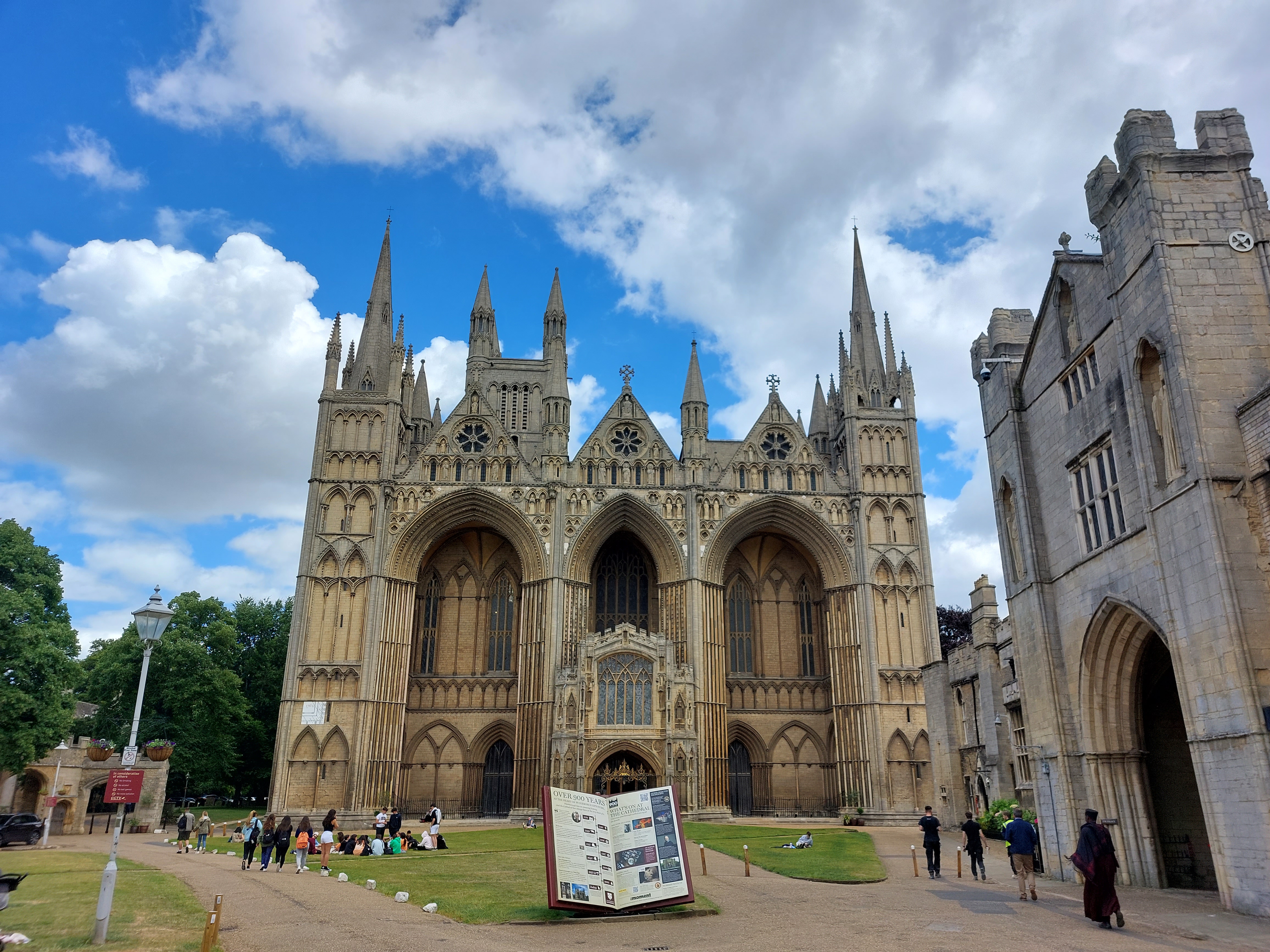 This is the cathedral at the center of town. Very impressive. 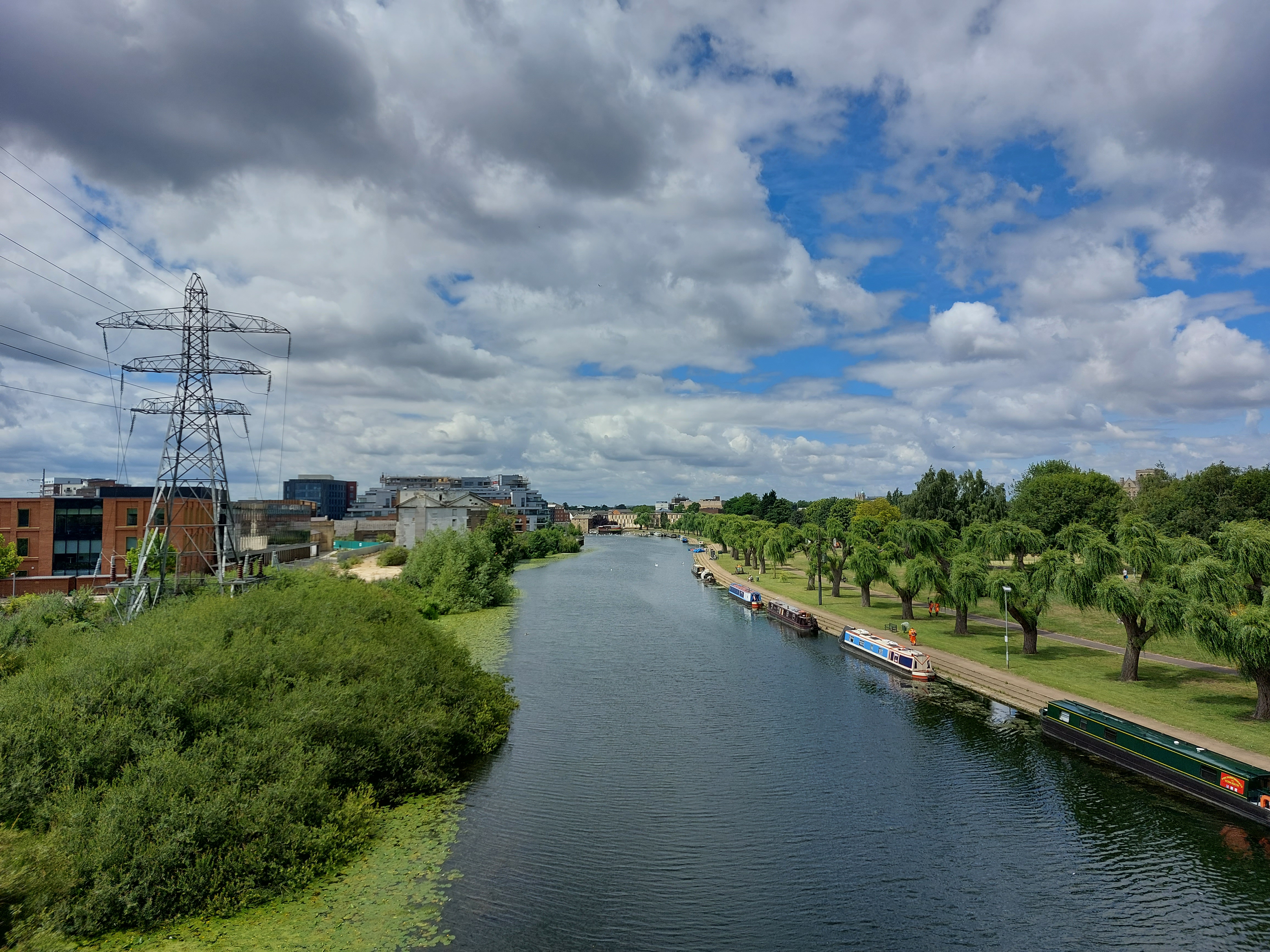 And here’s a shot looking back at the town as I cross a bridge on the way out. 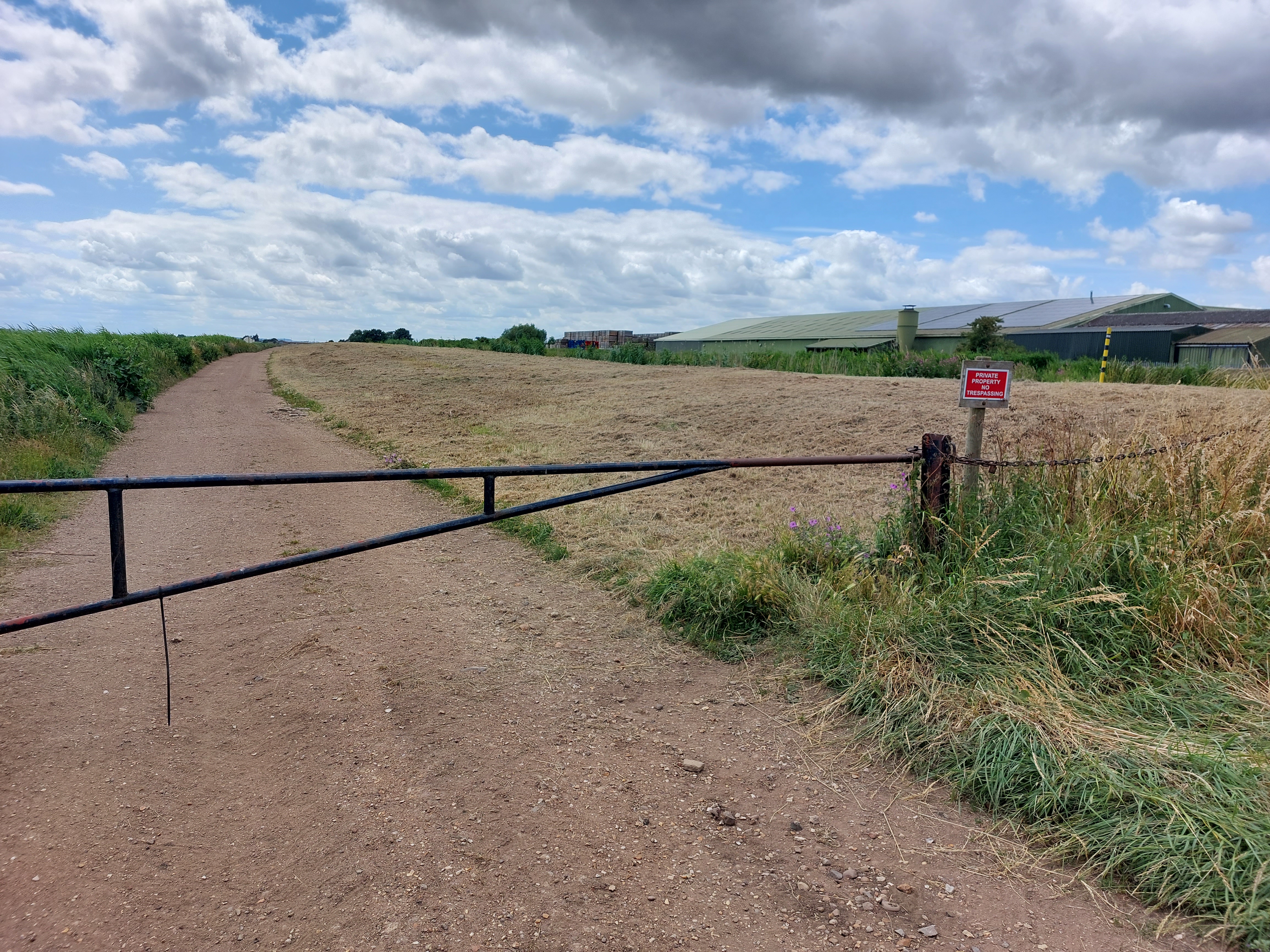 Once out in the country Google Maps did it to me again, sending me 3 miles down a road that ended at somebody’s farm, and then told me to turn left on this dirt road. So I did, and when I got to the end a mile later and looked back, I saw this. So yeah, I was on private property that whole time. Nice job, Google Maps. 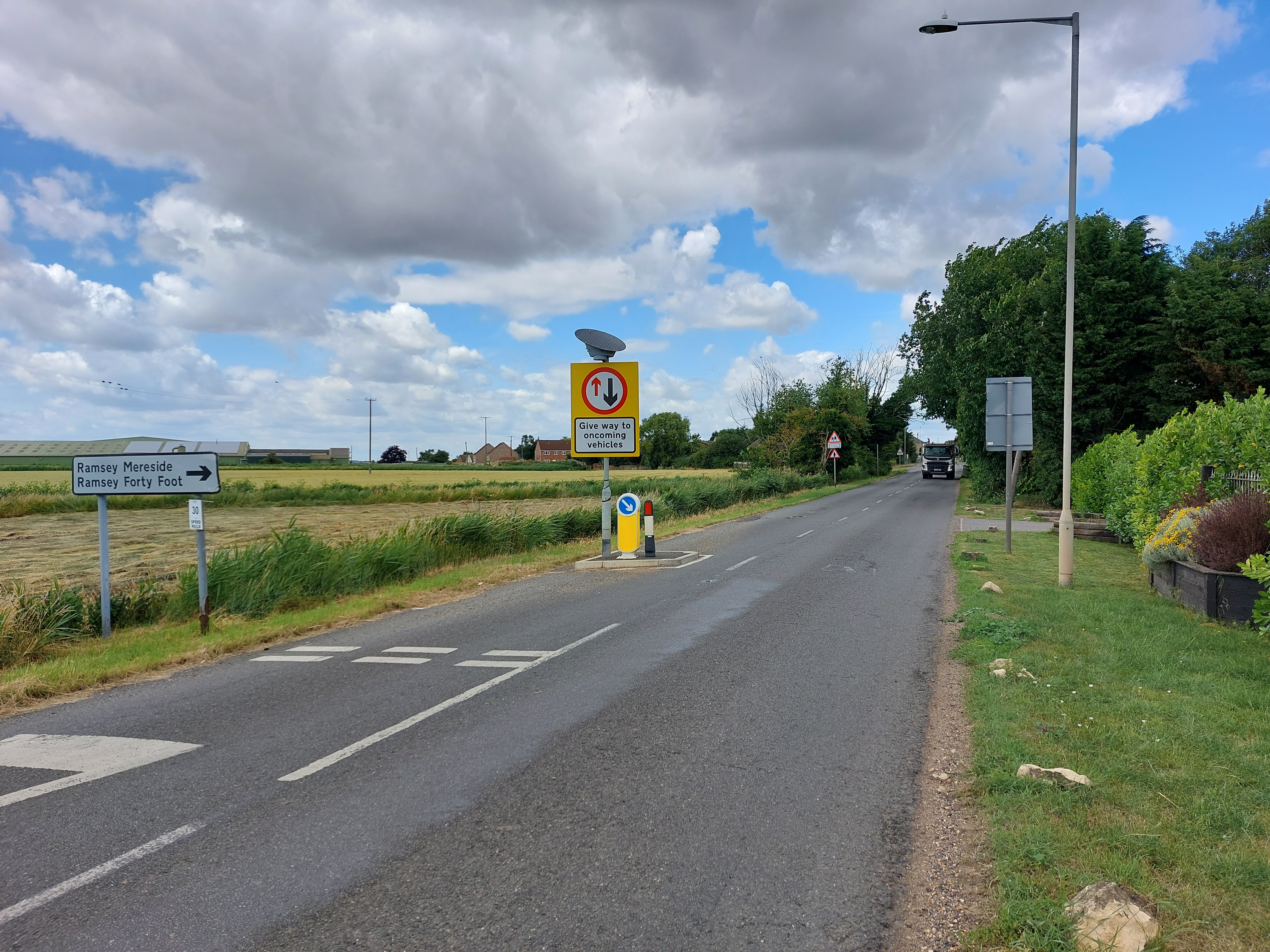 Sidebar: Here in the UK, there are places where this happens...see the “give way to oncoming vehicles” sign? (Remember you’re driving on the left.) Places like this are designed to break up traffic in towns and near busy intersections. When you come upon one of these you have to stop and let any oncoming traffic pass. I think they must be a pain for drivers, though most of the time on a bike I just blow around them. 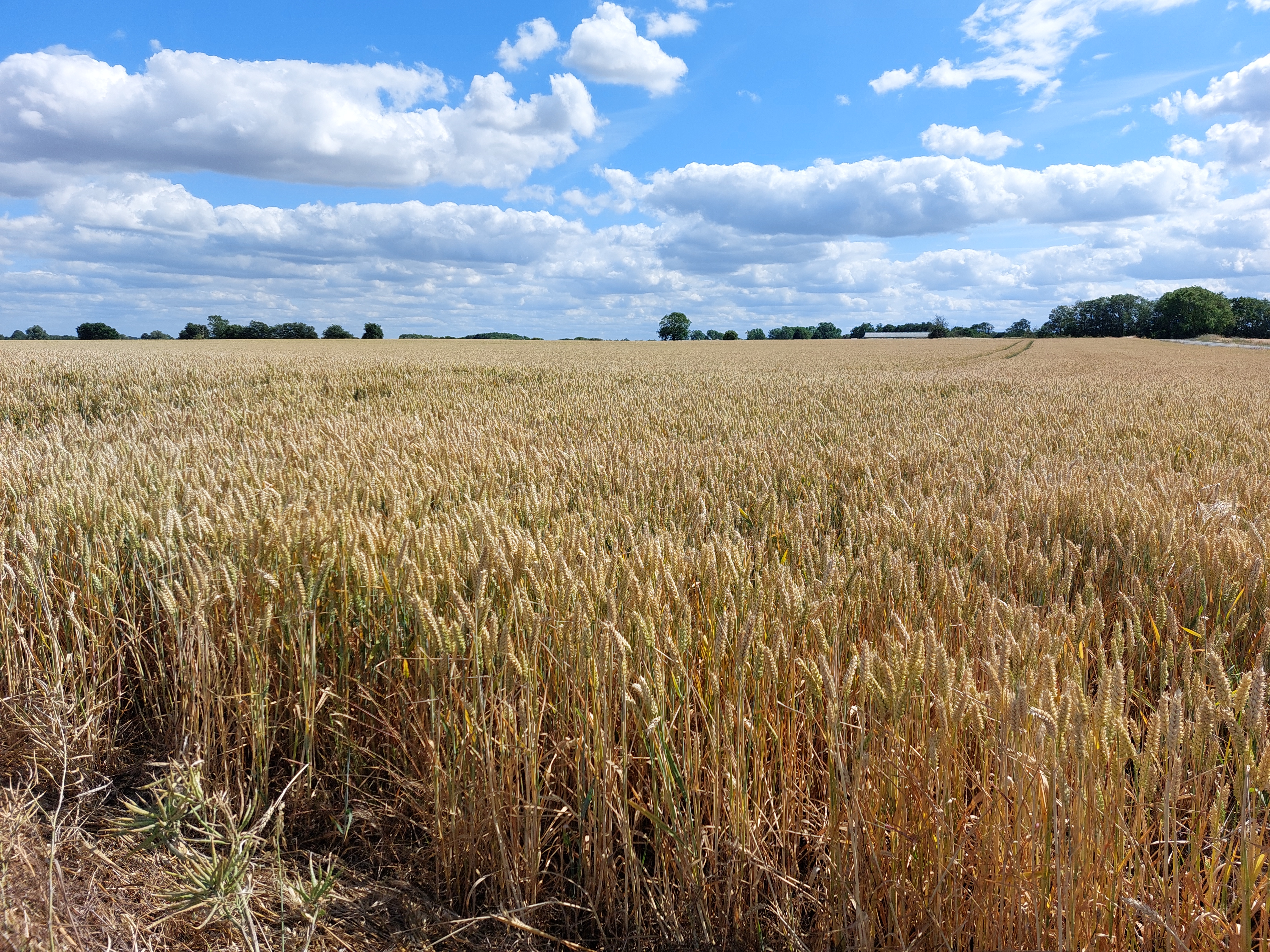 For the middle part of the day I got treated to seemingly endless views of this. 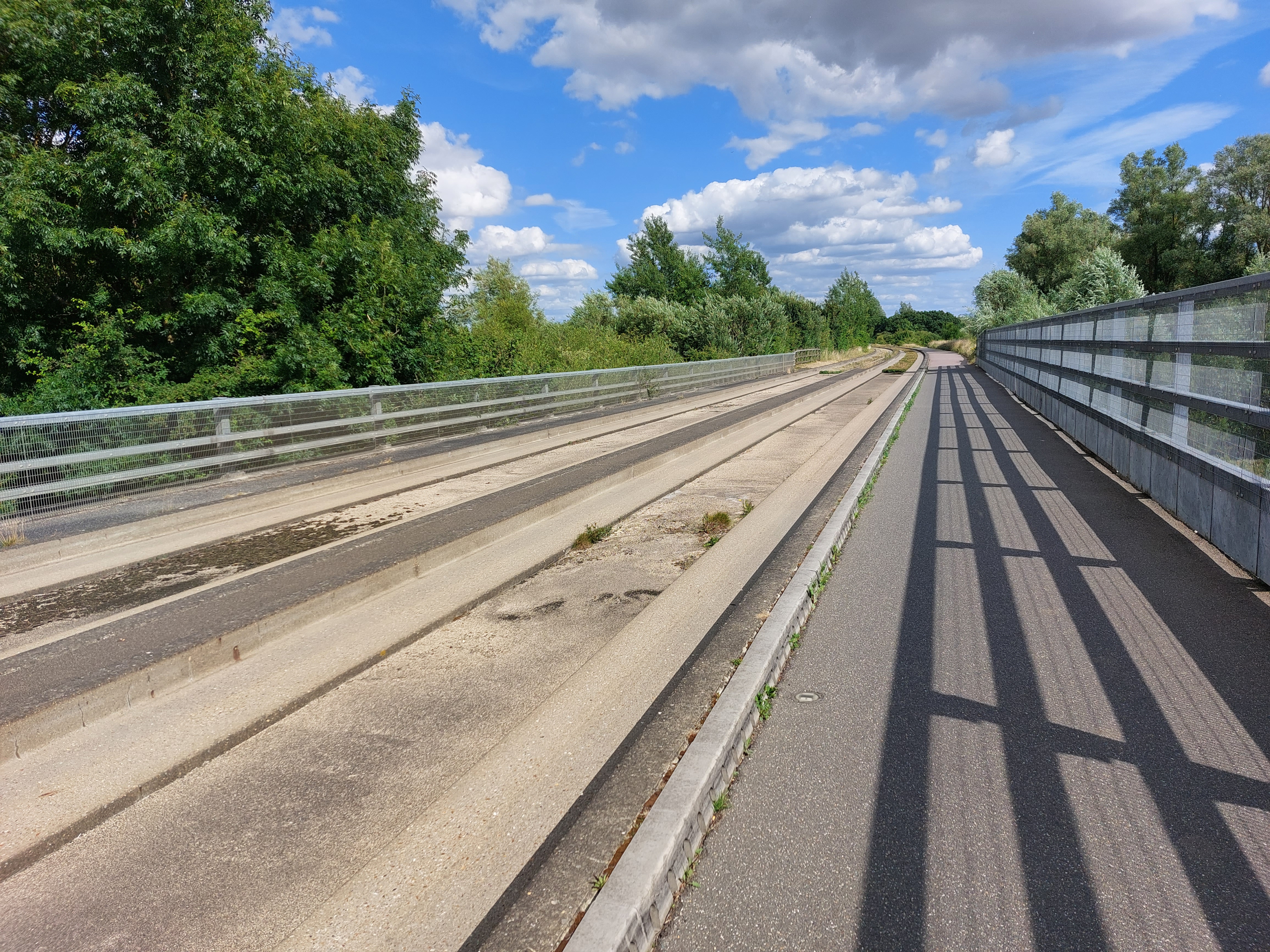 Then, finally, I got onto this awesome bike path that followed along next to the “busway” from Huntingdon to Cambridge. See those two lanes to the left? They are for buses only and yes, those are high concrete barriers that work like rails. I wasn’t sure how buses could even drive down one of these without going up over the curb. 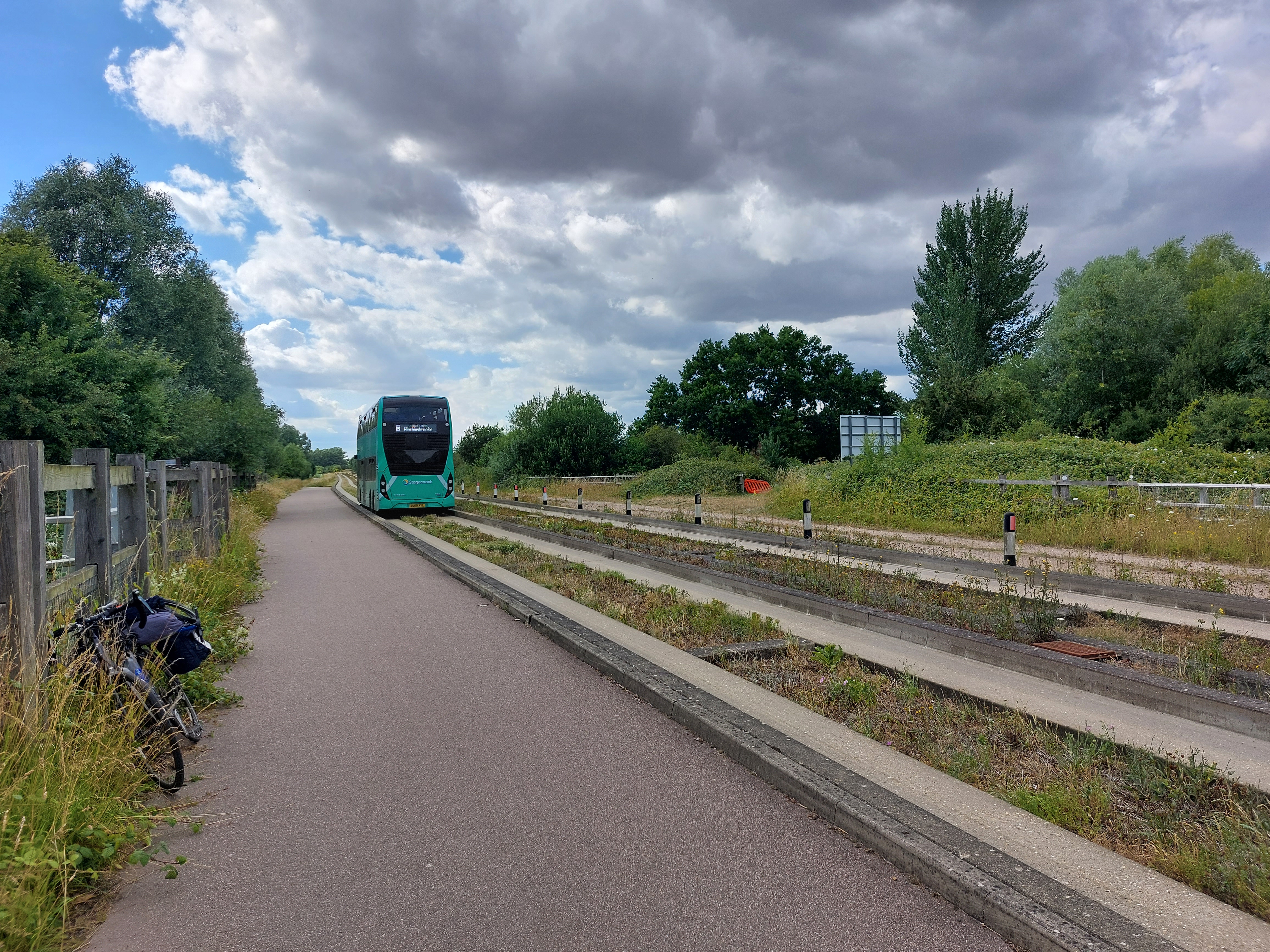 Then, eventually, one went zooming past me (at a high rate of speed) while I was stopped looking for a cache. You can see the bus is just zipping along in between those concrete rails with no problem. How do they do it? Turns out there are little guide wheels extending out in front of the axles, so the driver probably doesn’t even need to put his hands on the steering wheel at all. When the bus comes to the end of the track those guide wheels just go idle and the bus drives along normally. So this whole thing is like a train track for buses. How cool is that? Oh and the best part is the path running alongside...look how wide and smooth it is. Pure luxury. 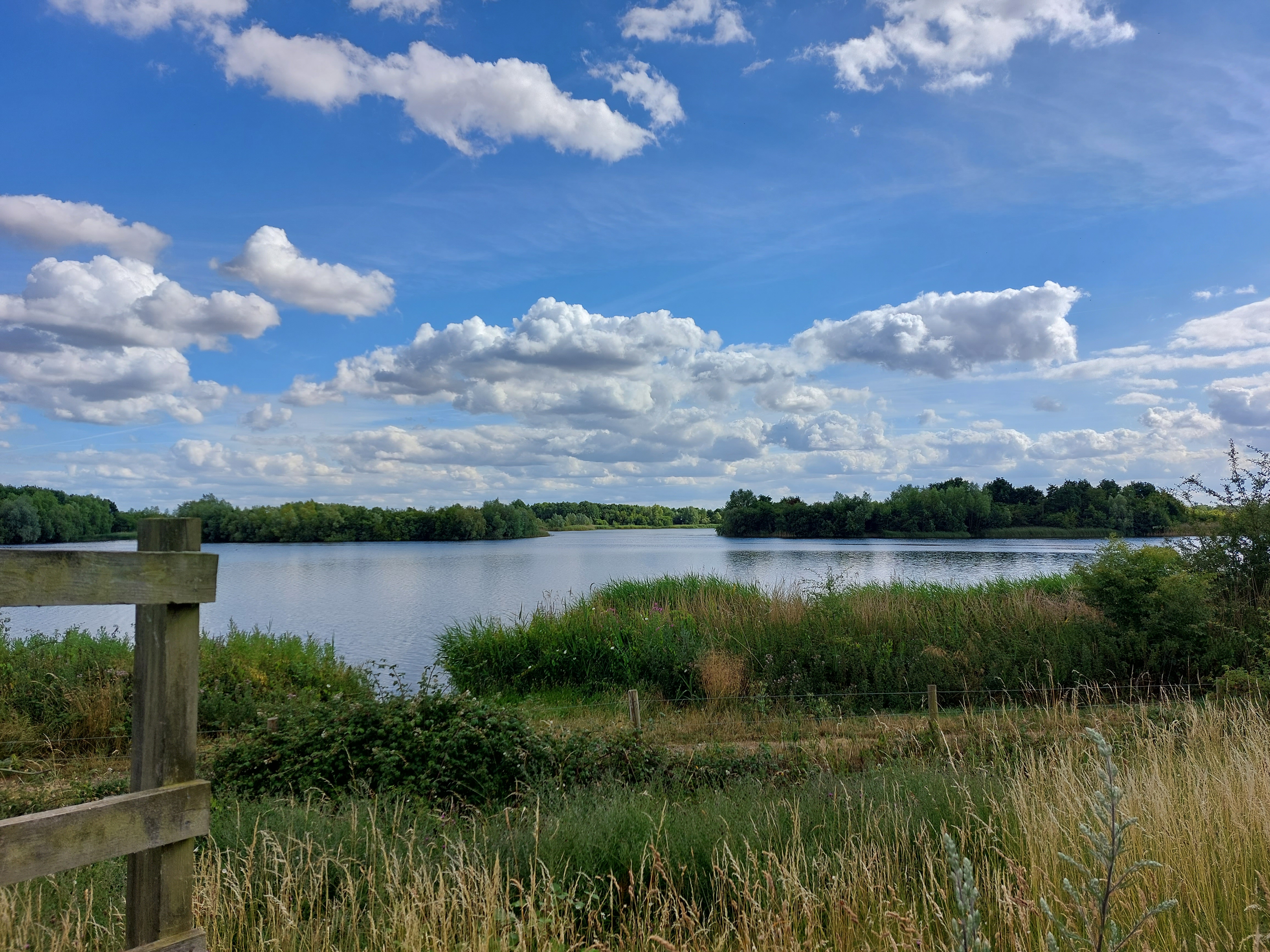 Even better, the route went right through some very picturesque natural wetlands. 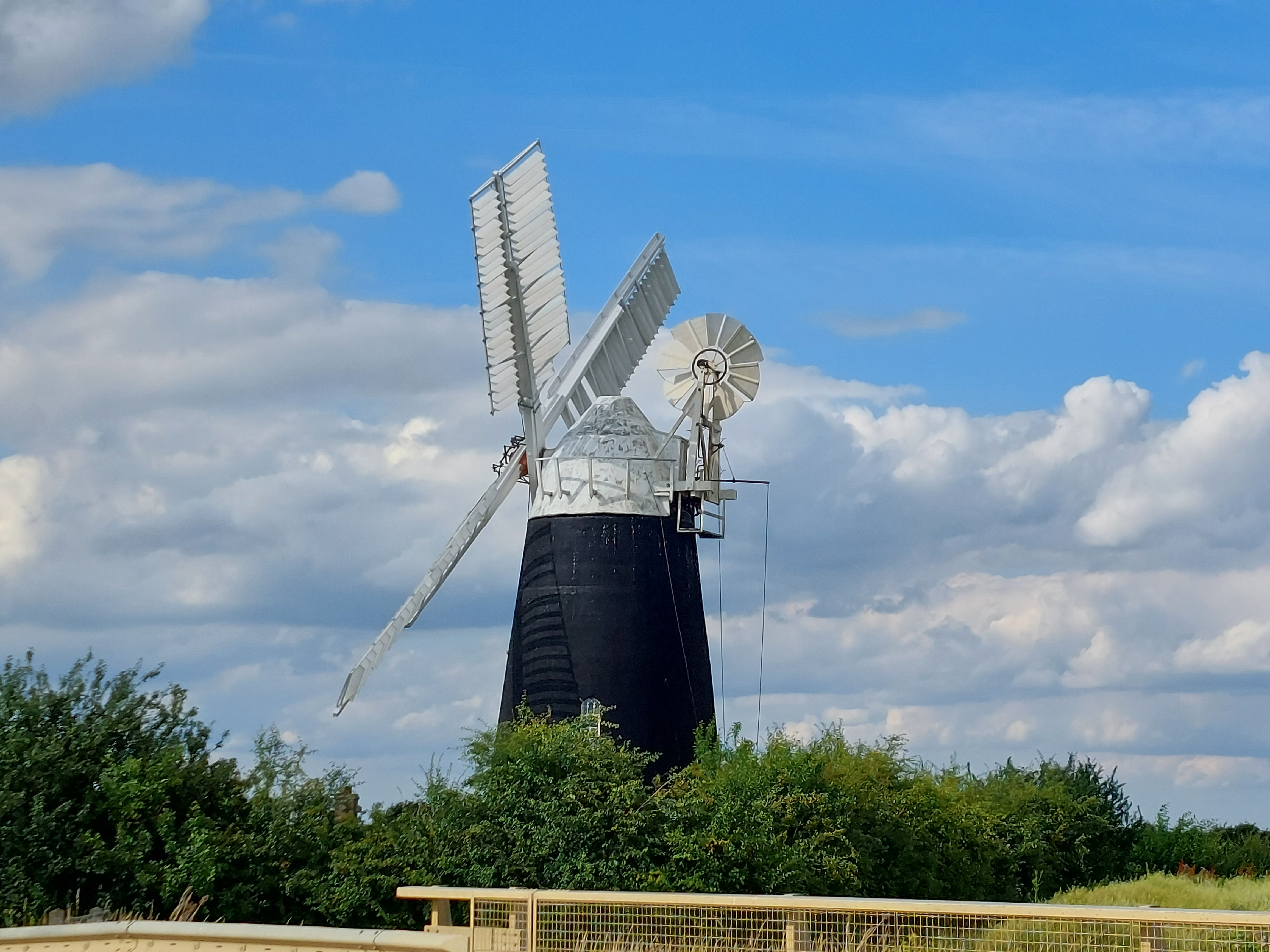 Along the way I spotted this nice looking windmill sitting off by itself. 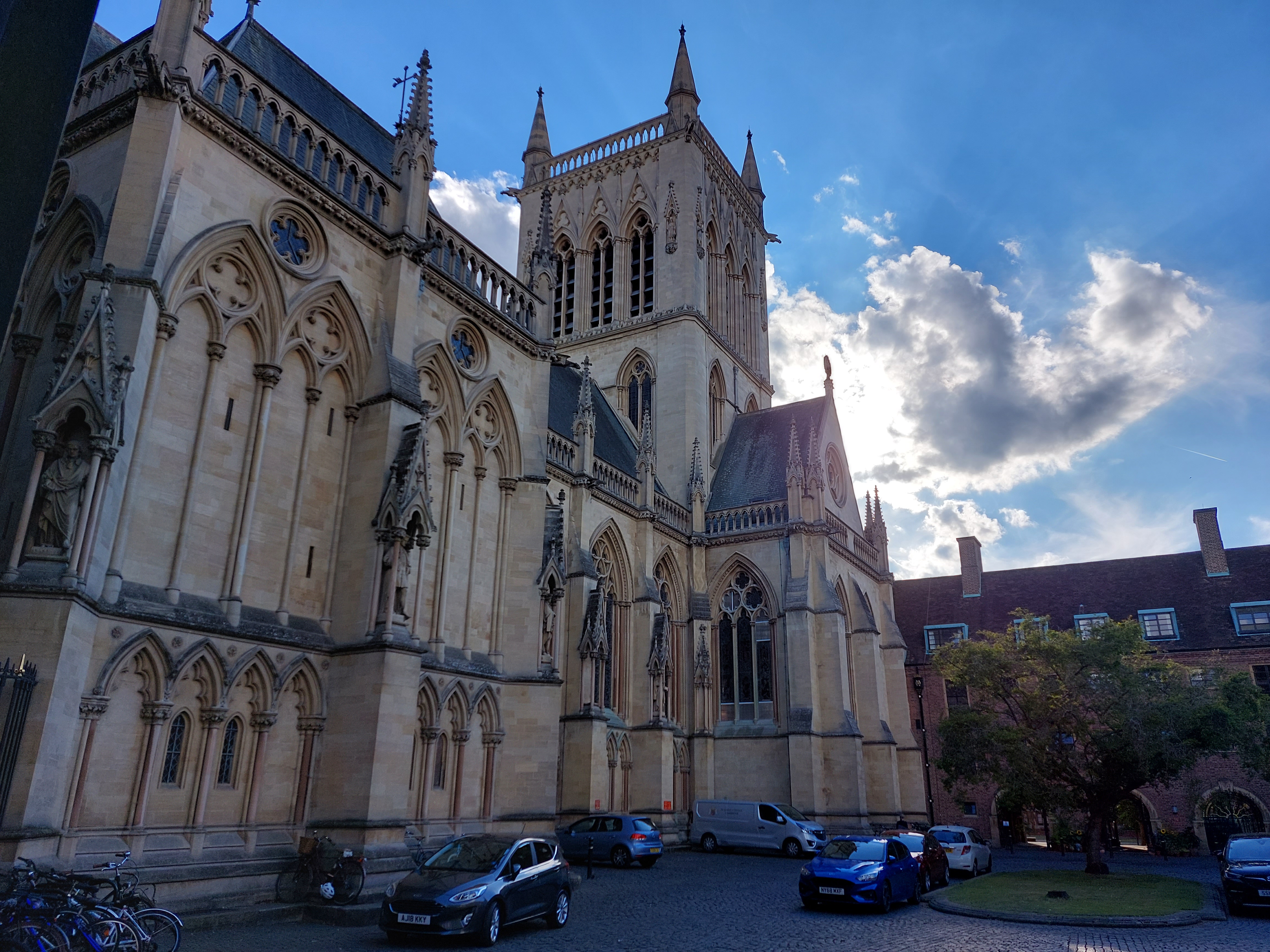 Now I’ve reached Cambridge so most of the rest of these pictures will be from there. This is St. John’s University. 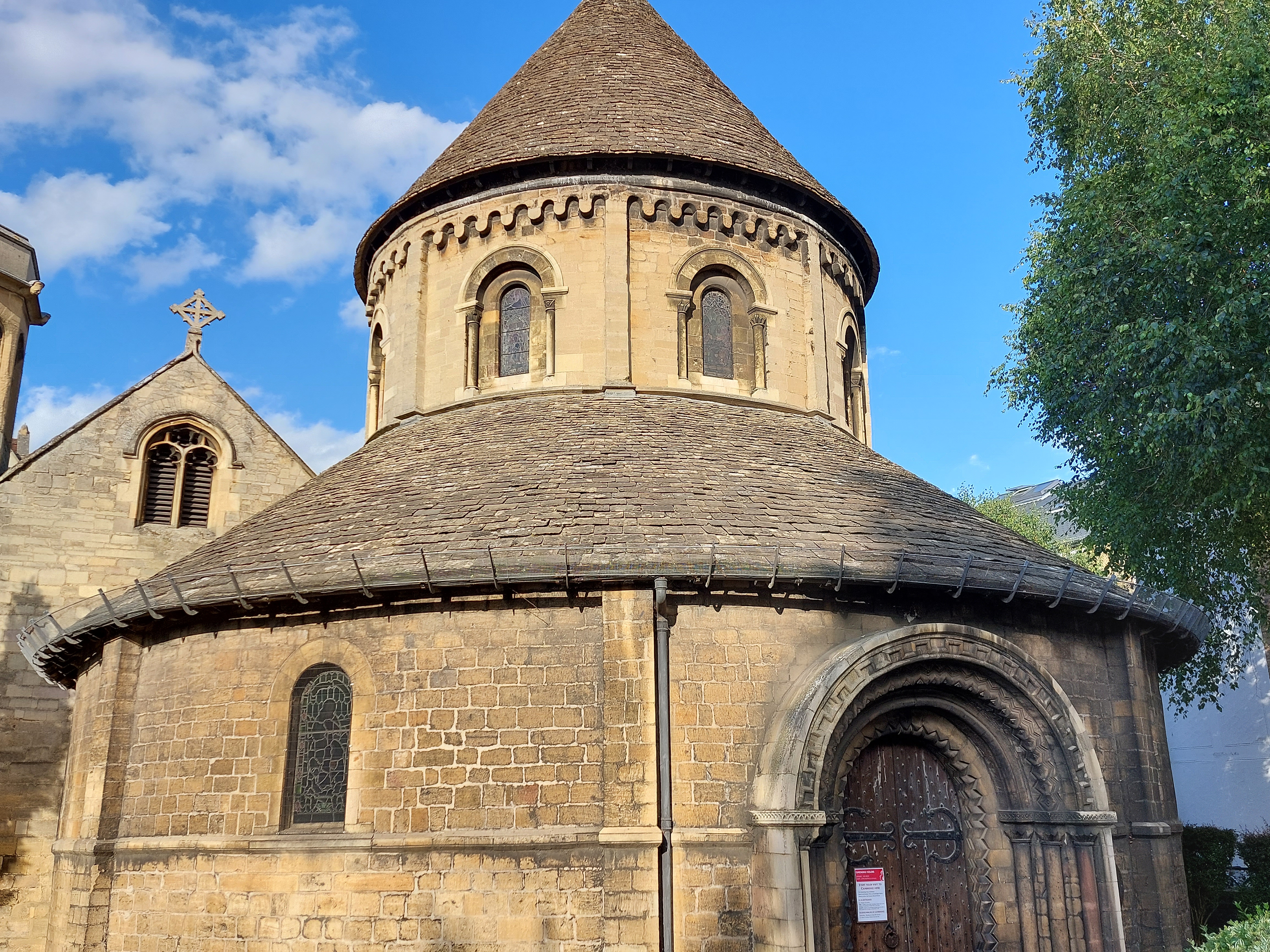 The Little Round Church, just across the street from the last photo. 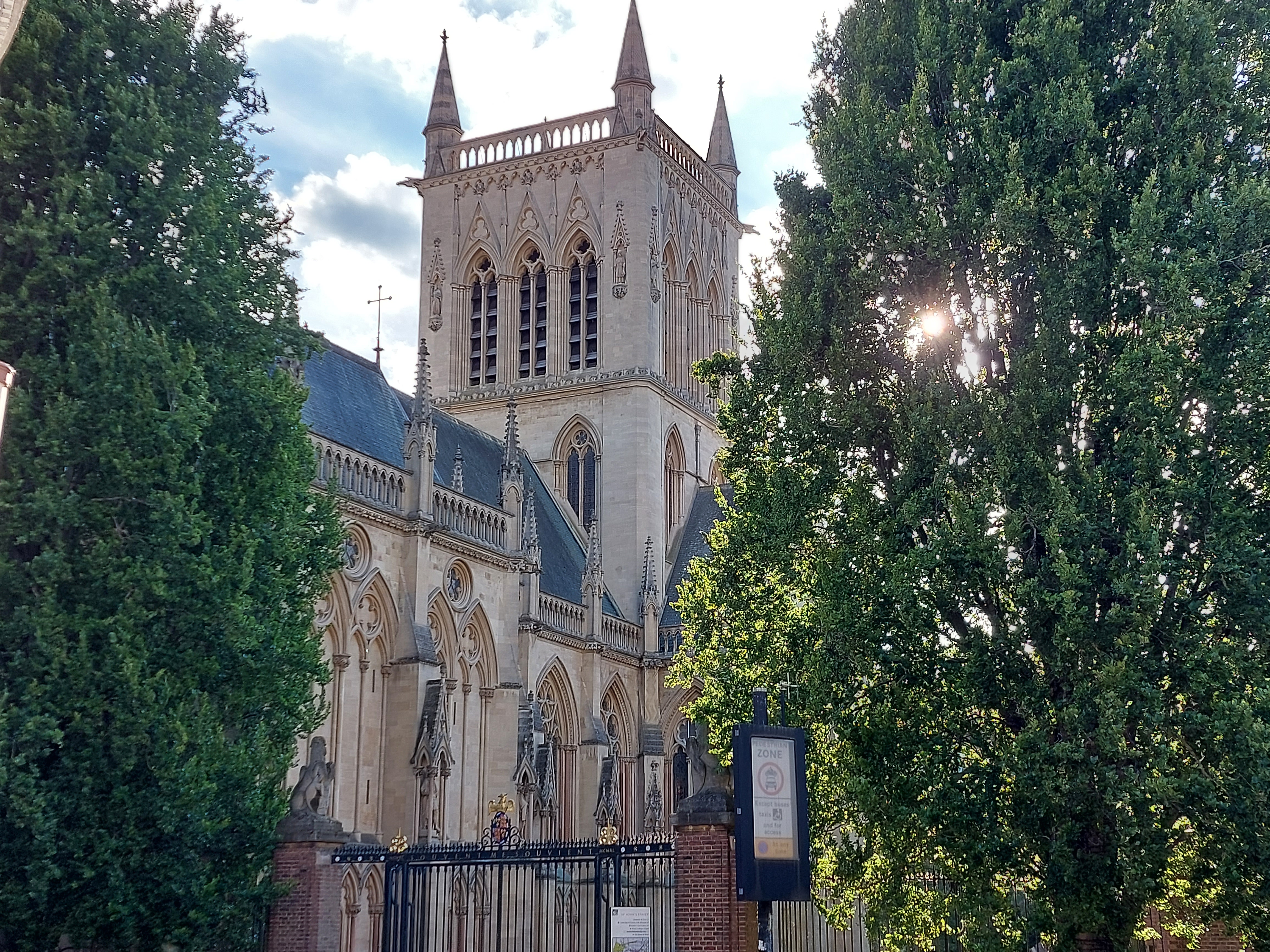 Even better view of St Johns. 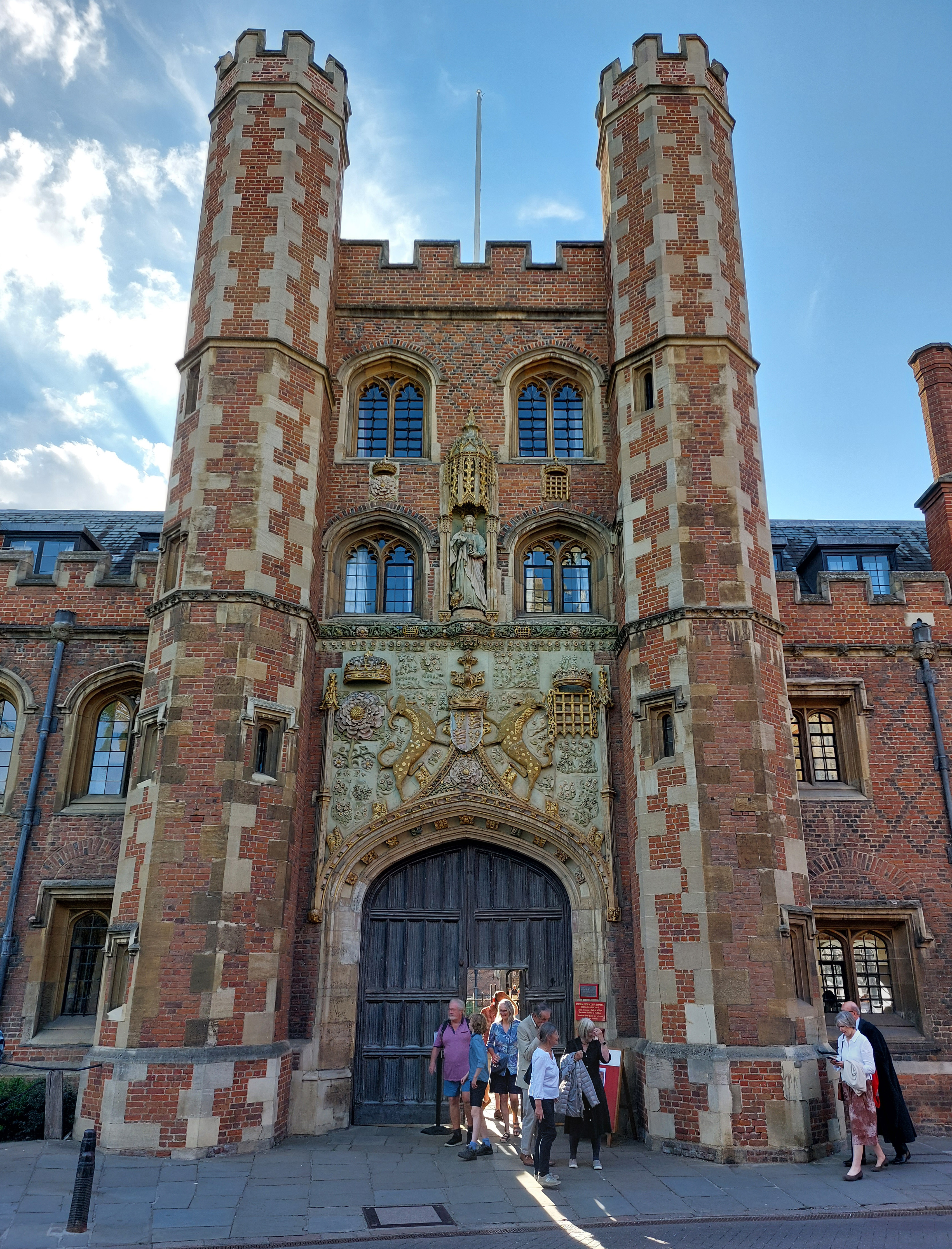 The Great Gate into the university. Obviously crawling with tourists. 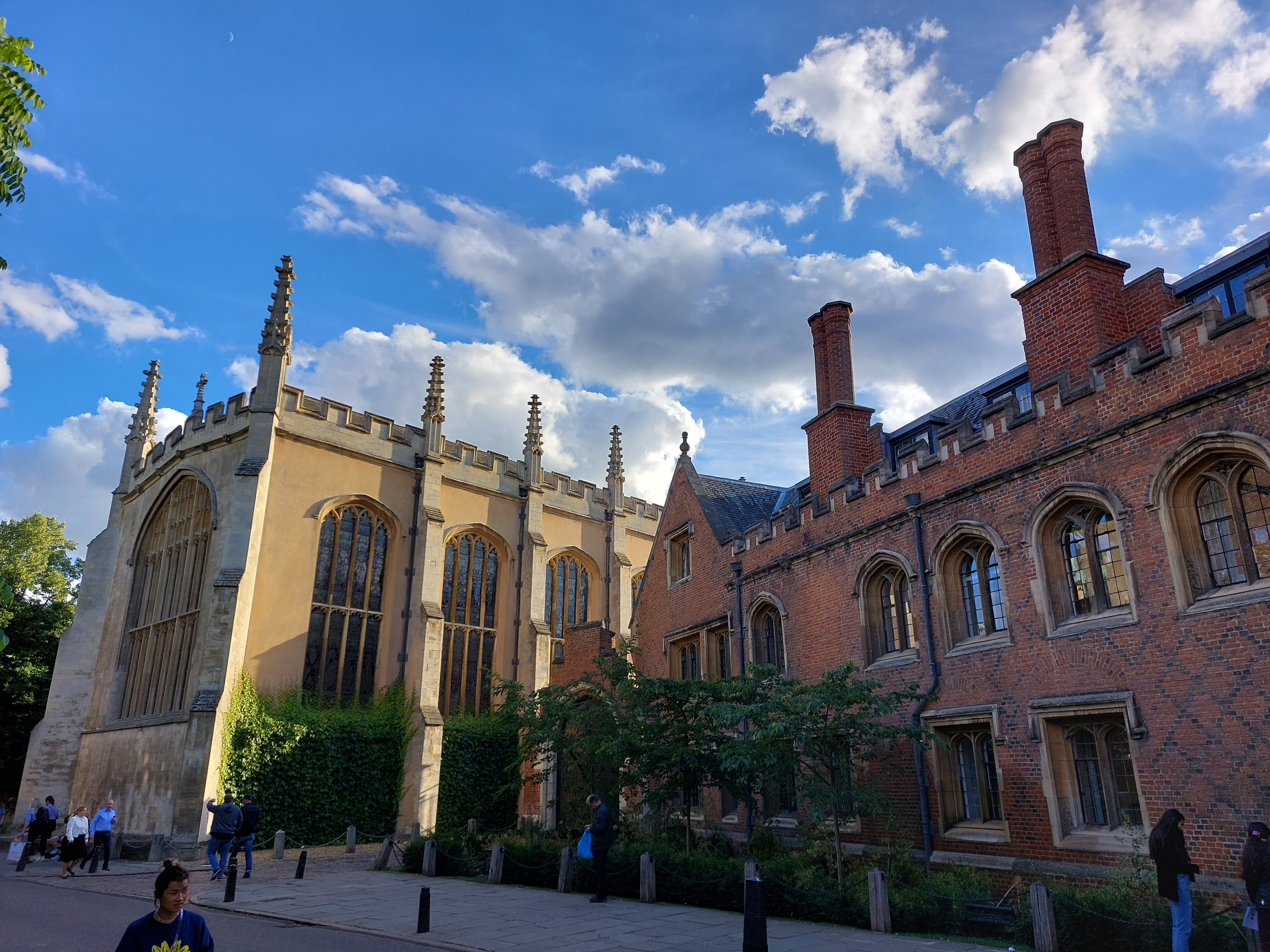 More of that amazing architecture. 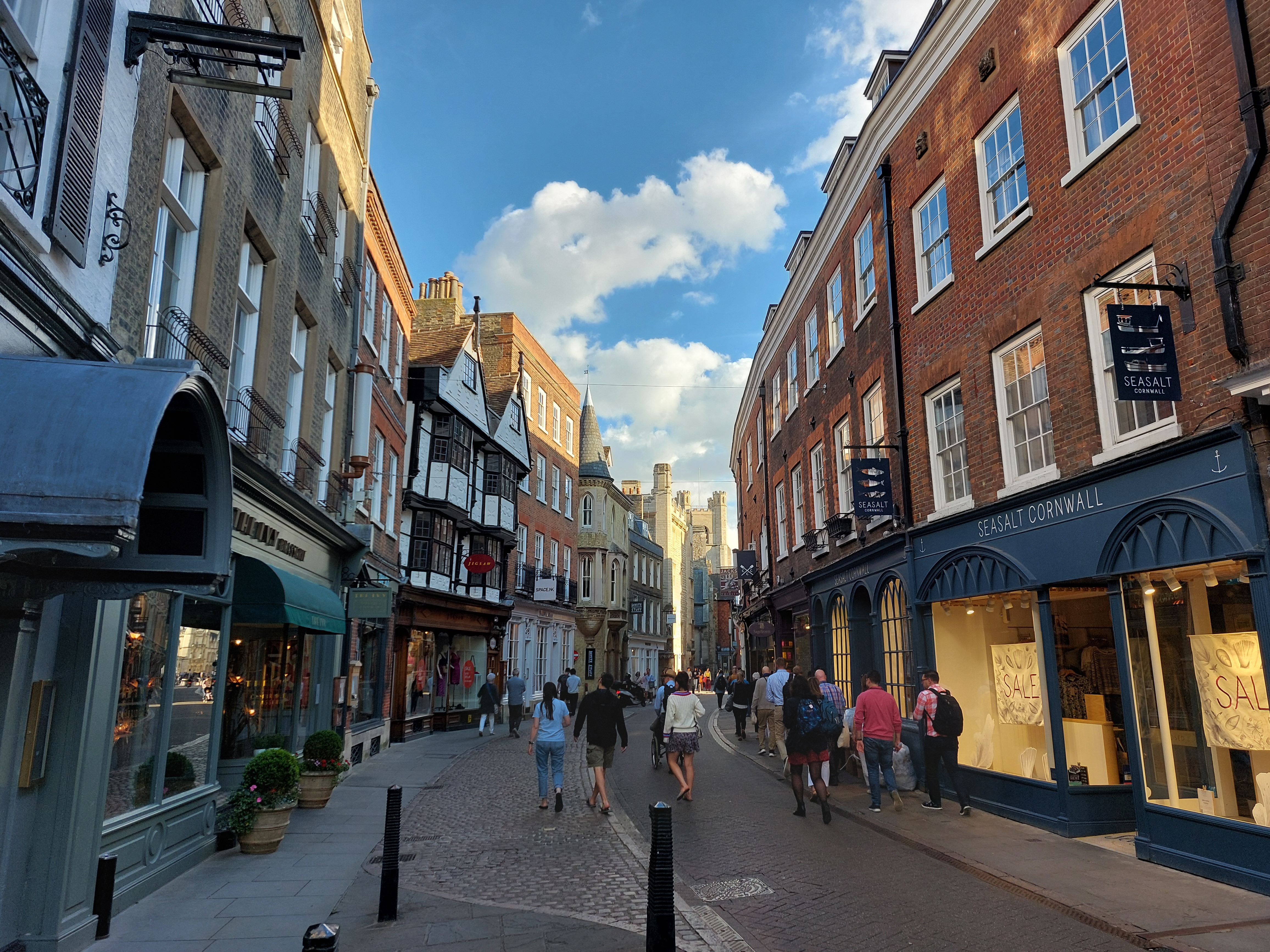 Some of the streets nearby. Harry Potter fans, what does this remind you of? 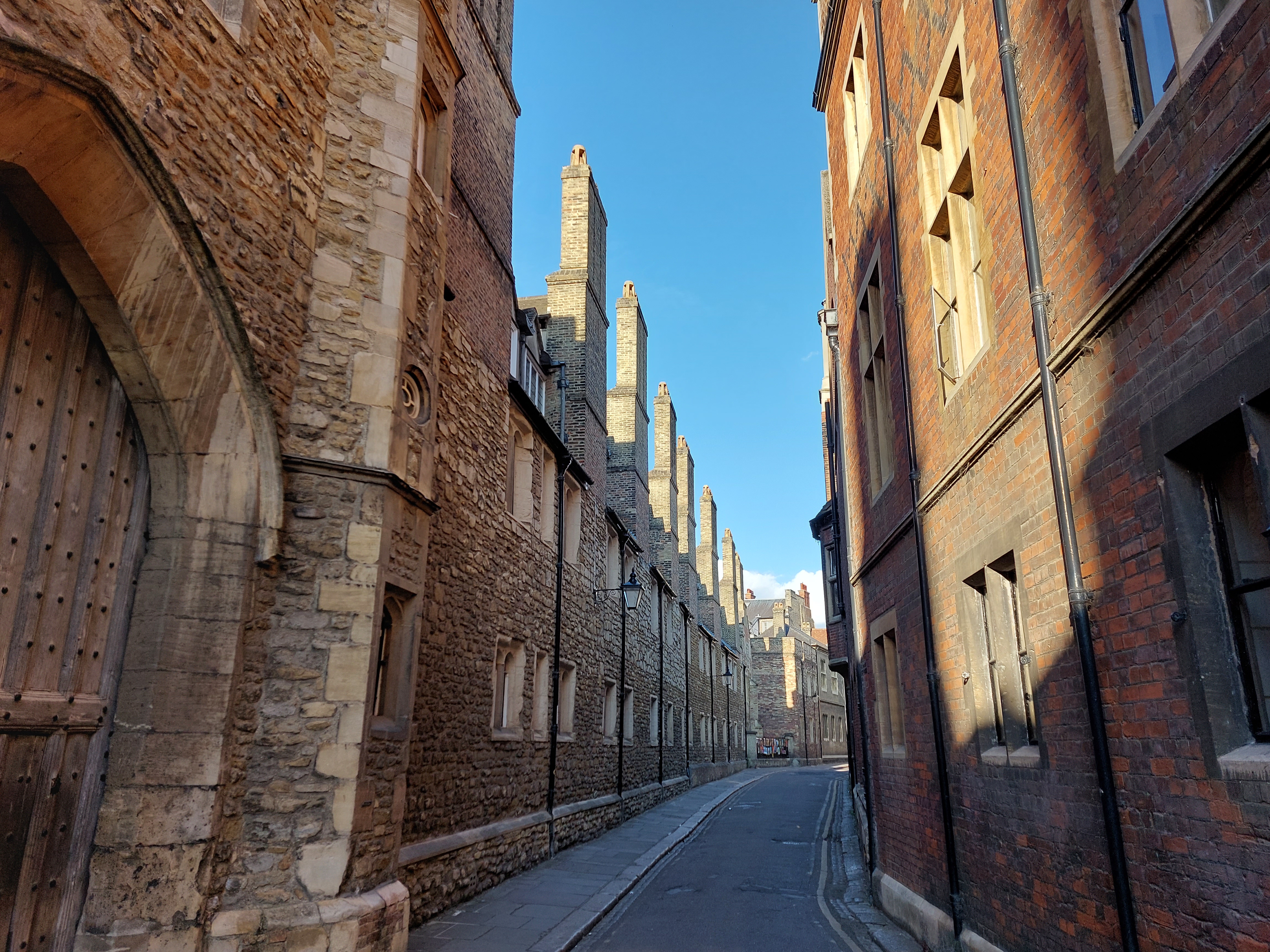 Another cool street nearby. Look at those chimneys... 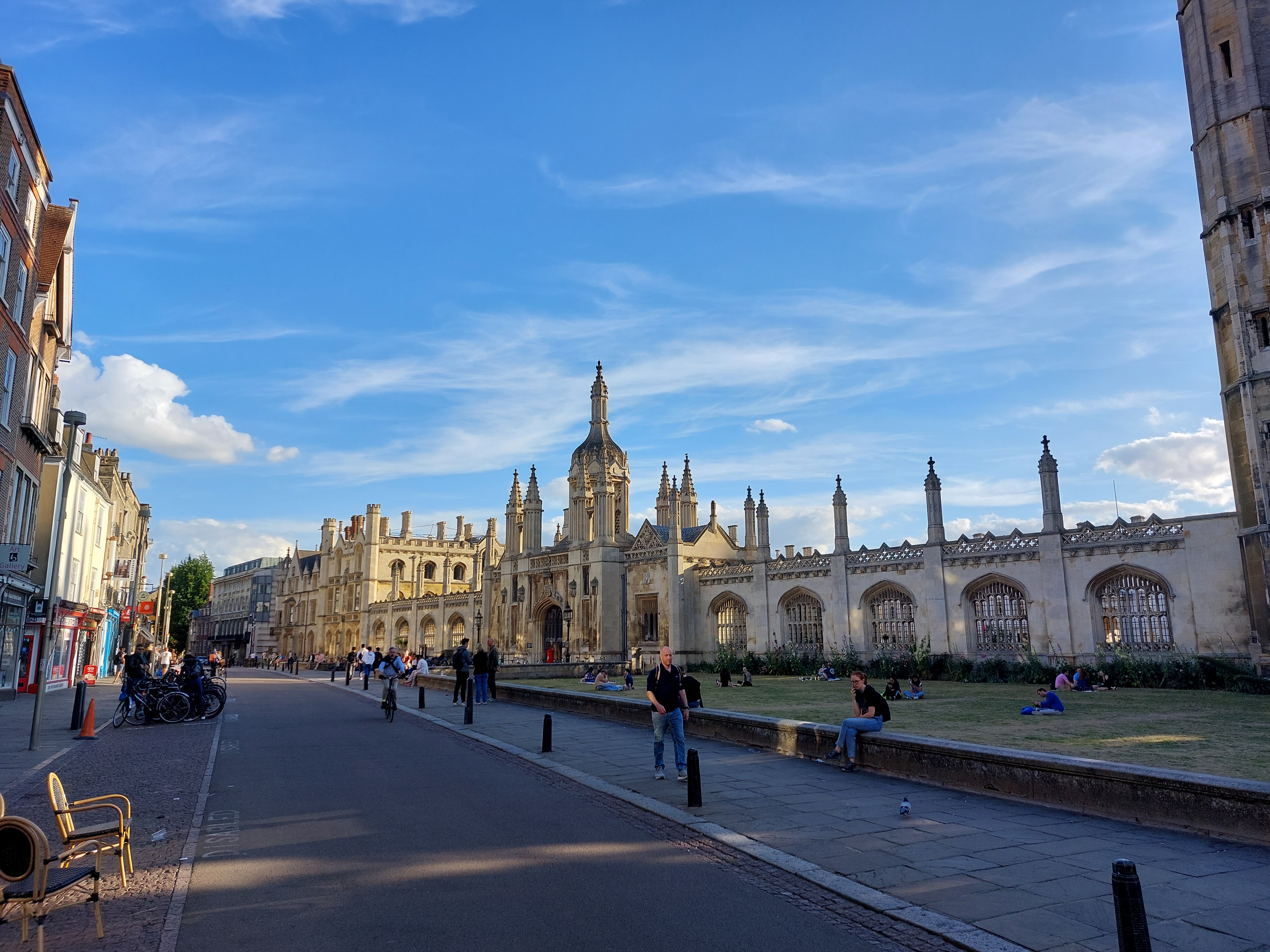 Further down the road, the beauty continued... 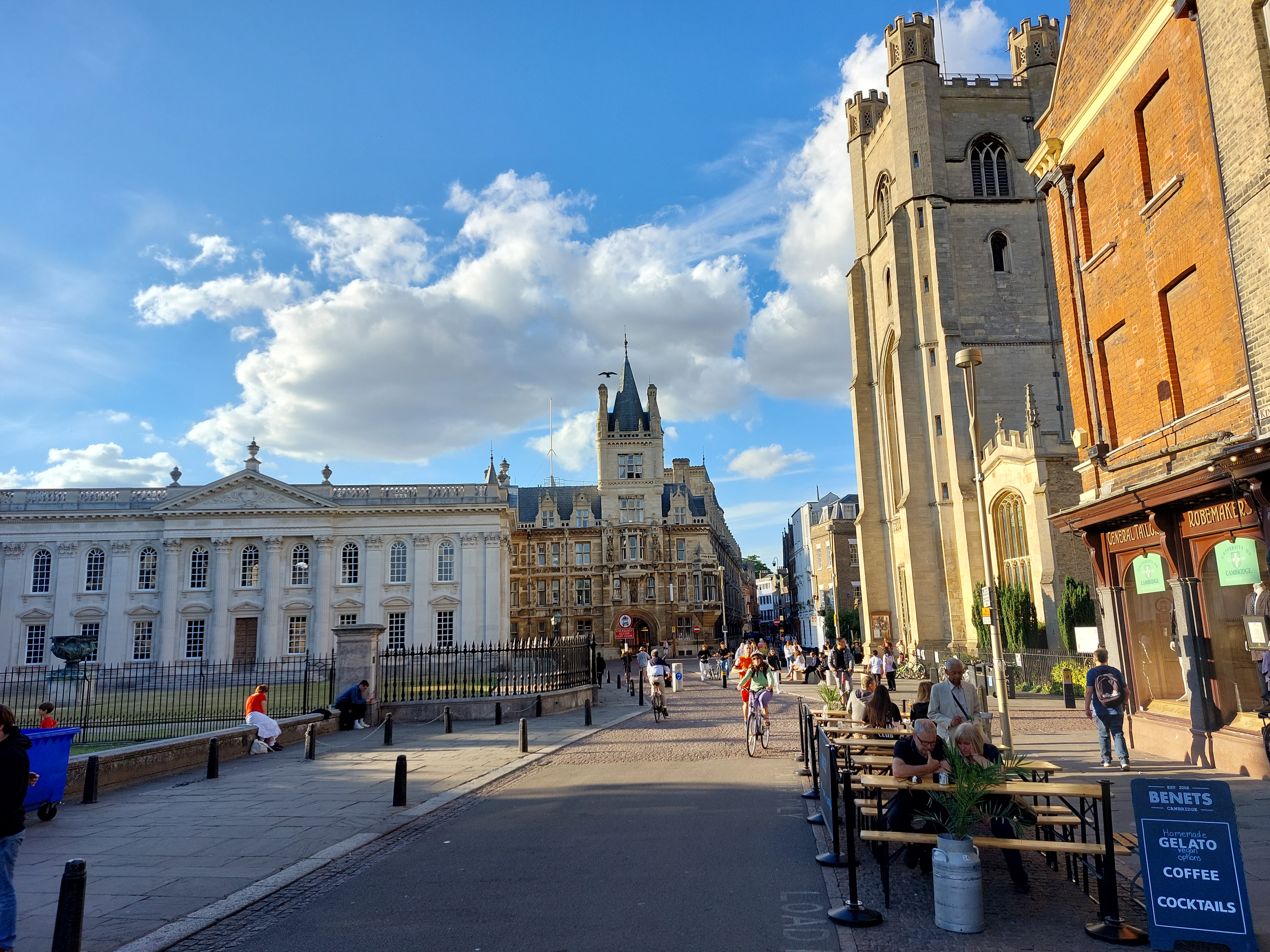 Looking back from the previous spot. 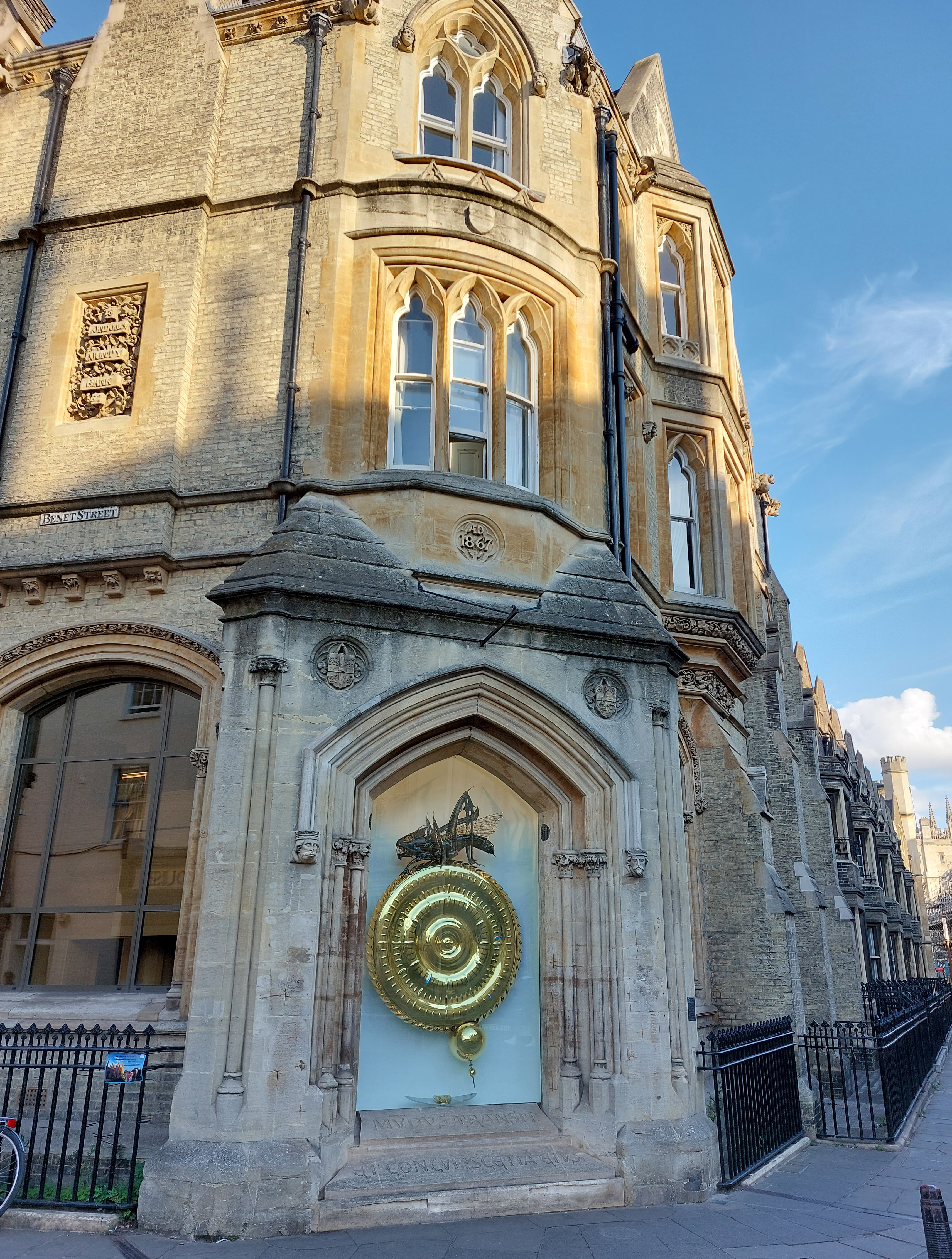 I enjoyed watching this clock tick along. Since it’s a still photo you can’t see what I mean, but basically, the creature on top would reach out with a claw and drag the wheel one click at a time every second, so it looked like the thing was walking along while the wheels rotated underneath. 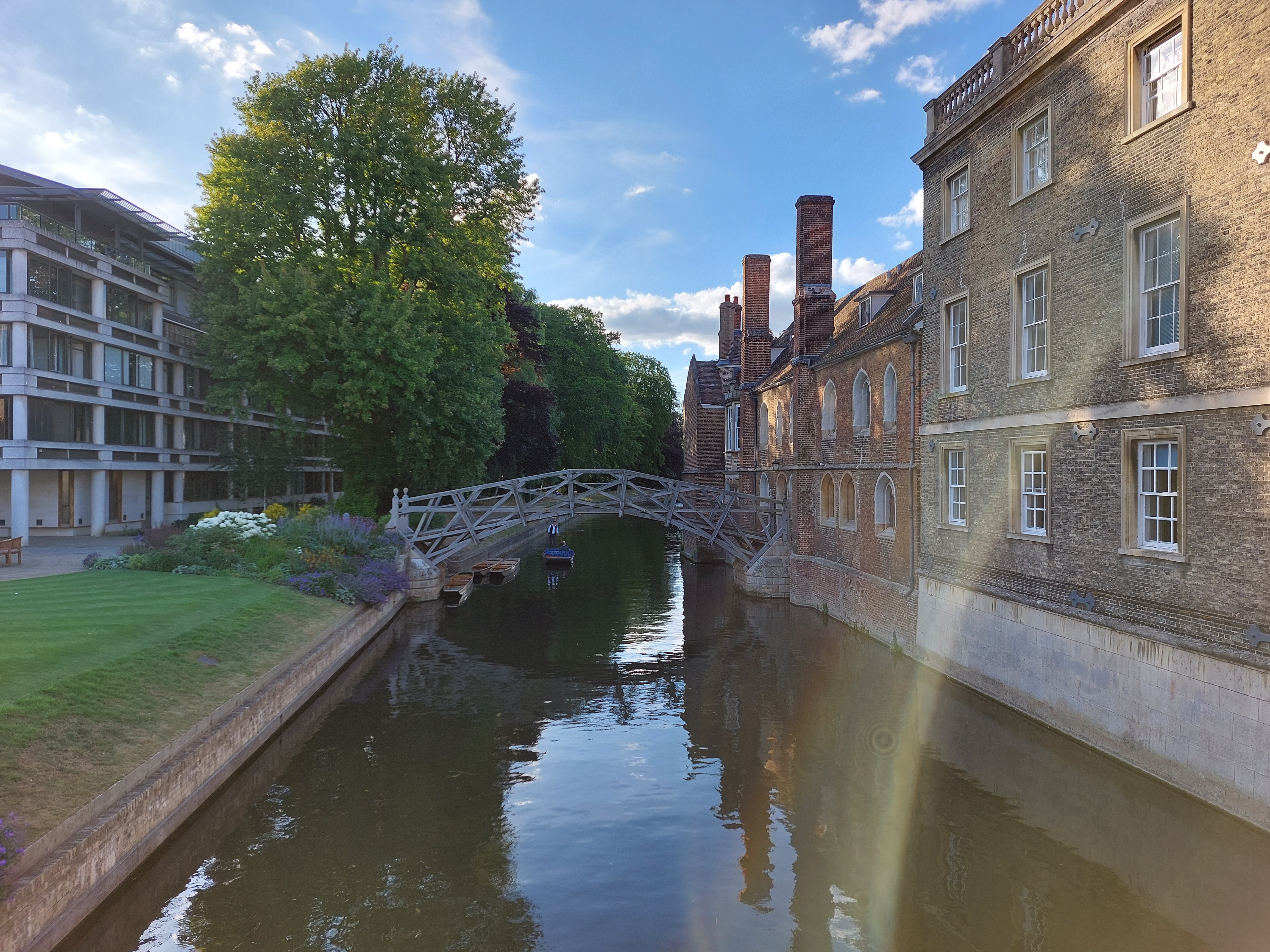 The canals running through town were also very pretty. This view is adjacent to the Queen’s University. 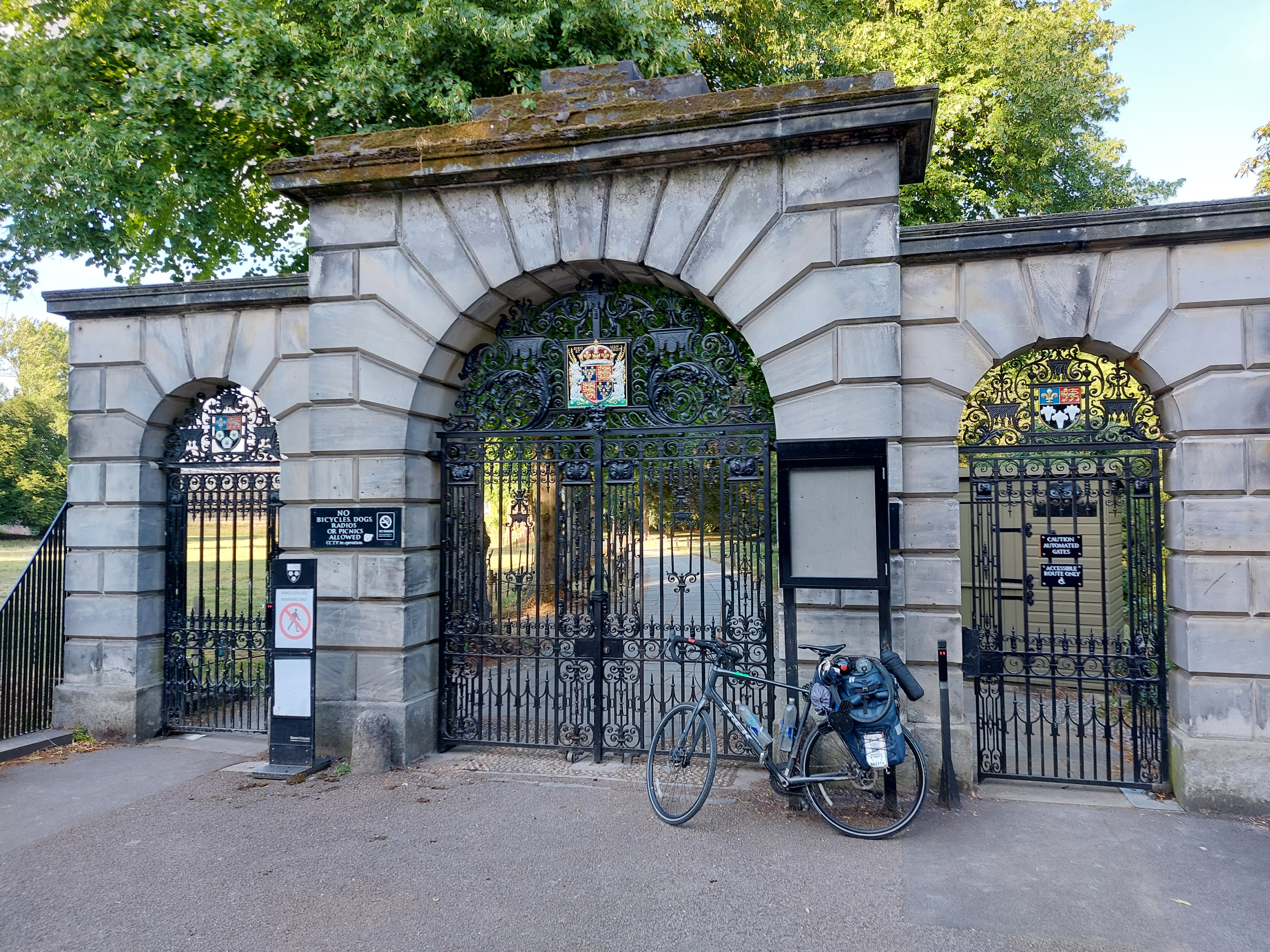 This is the gate to the King’s University. No bicycles permitted? Bah! 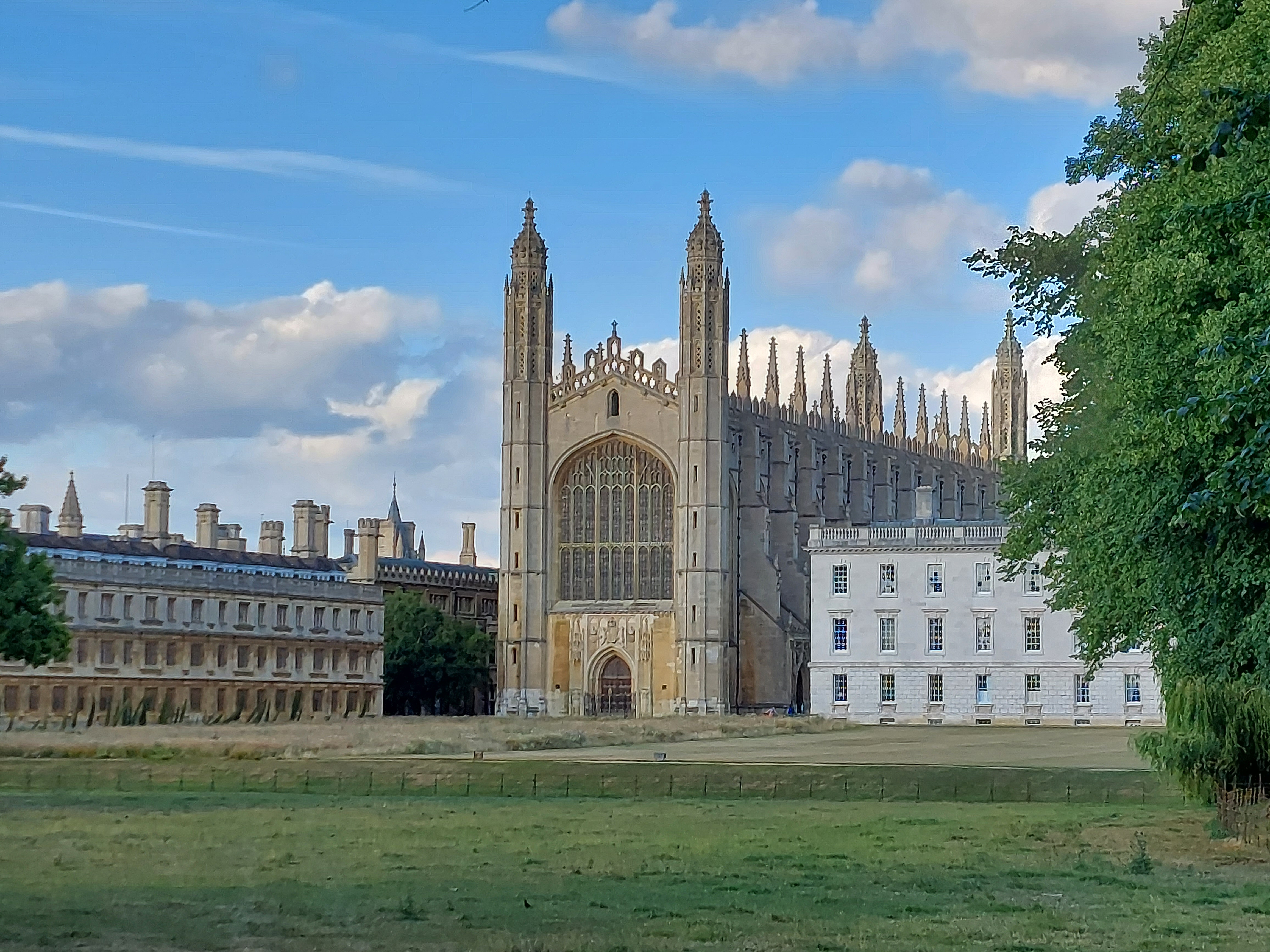 And this is the King’s University, visible to the left of the gate in the previous photo. 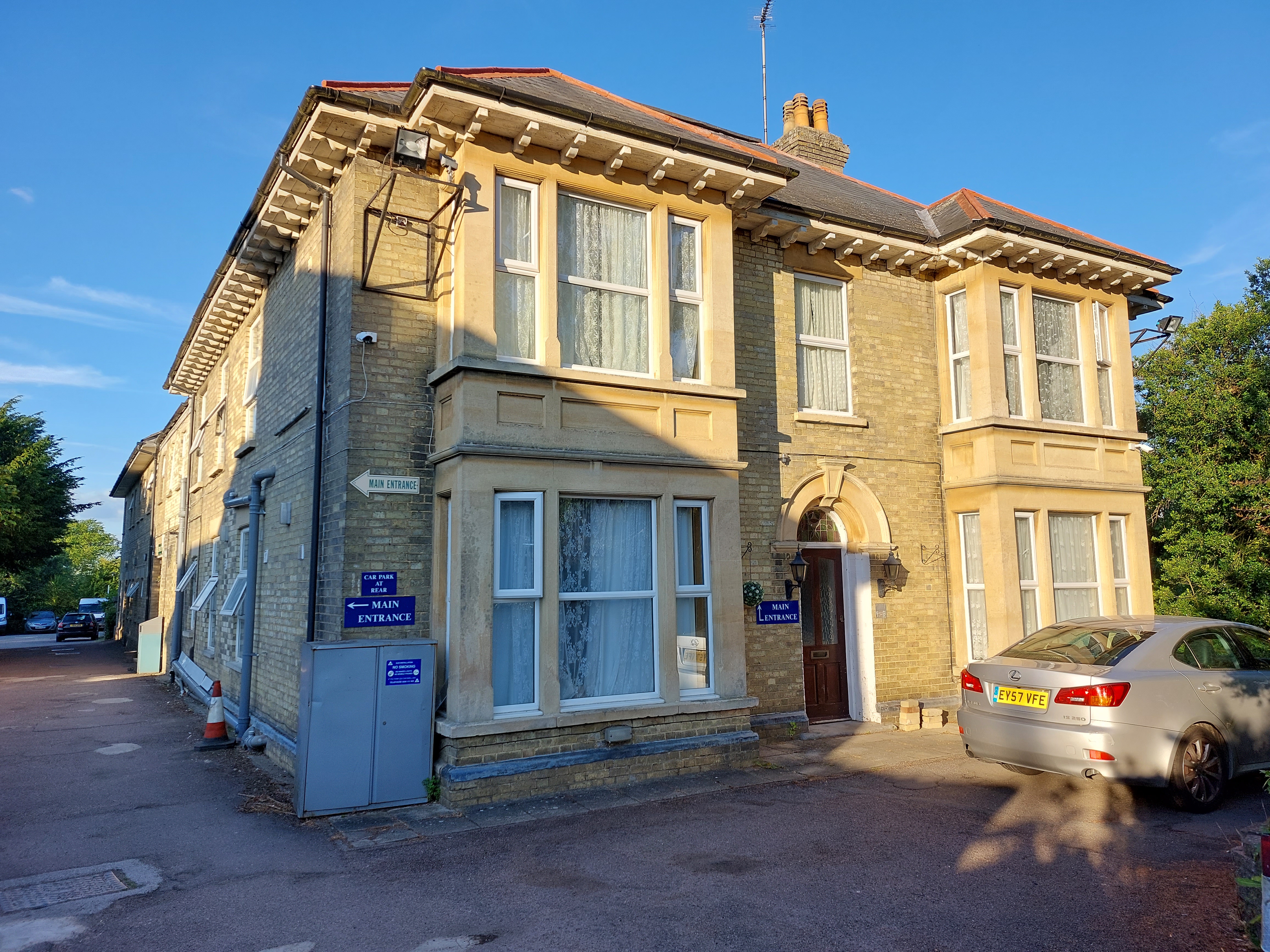 Now onto my hotel, which looks like this...basically a converted apartment building. Honestly it felt more like a hostel inside...it has an upstairs common area with seats and a full shared kitchen (where I will enjoy a free breakfast in the morning). 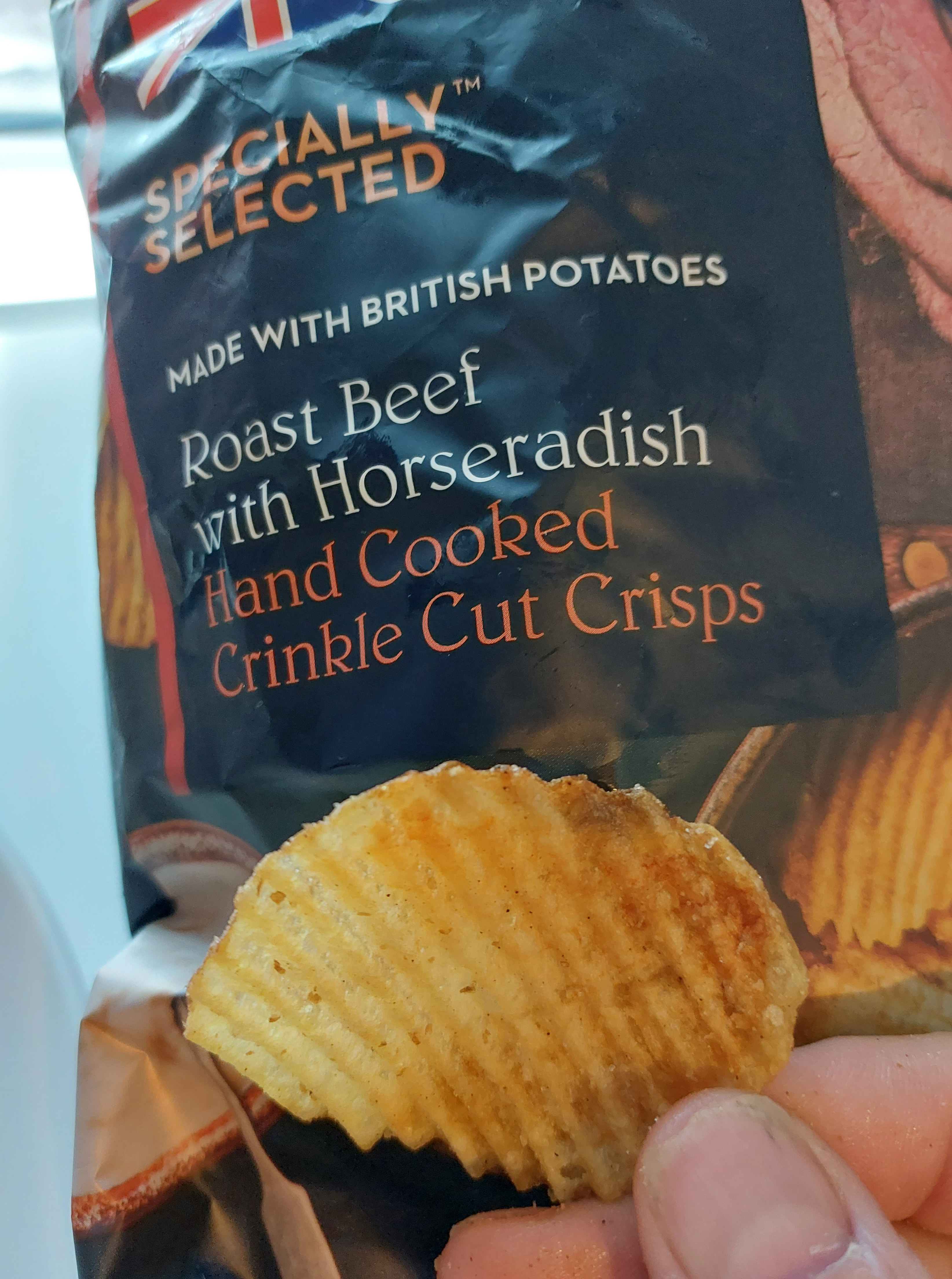 One nice thing about traveling is sometimes you can find some unique locally flavored items. In this case it was these yummy roast beef and horseradish flavored crisps (don’t call them chips...that word means something totally different in the UK). I wound up eating the entire bag. Yum! Now for some sleep...one last ride awaits...