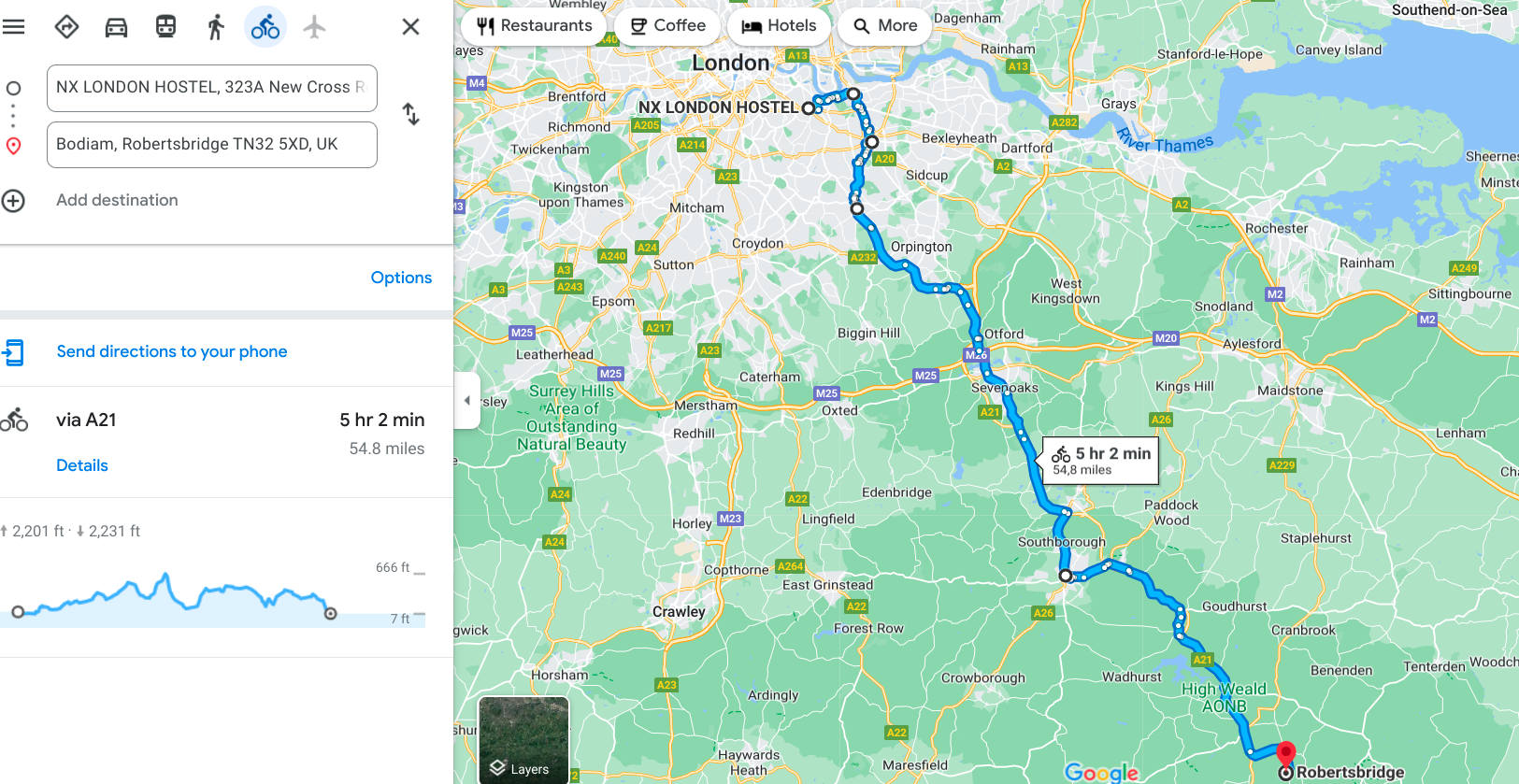 Okay, first of all, when you look over at the Google Maps reference for the trip, where it says “5 hr 2 min” for cycling time, basically increase that by at least 50% for me. My bike is too heavy to go faster than about 10-11mph in flat conditions, of which there were few, and today’s climbing was more than I expected and extremely challenging. Yeah, that’s a good word for it, challenging. I had to cross two sets of “downs” which are lines of low hills in this part of England and they consisted of very long, steady climbs that really started to hurt after a while. Plus I wanted to get to the campground at Robertsbridge by 6pm for a geocaching event. Luckily for me I didn’t trust Google Maps’ estimate or I would’ve been way late.

Anyhow, the day started off slowly as I had to get out of the hostel, which had seemed almost empty the night before...but apparently at breakfast time it gets really crowded. I ate something and then had to wait a bit for a restroom, and then wait even more to check out, but finally got on the road about 0930. I wanted to go see a few more sights before leaving London, so I headed back over to the Thames to visit Greenwich and then started the long trek south. As might be expected when moving away from water, the land goes gradually upward, but for me it seemed like it would never end. The few flat spots or brief descents ended all too quickly and then it was back to long, slow climbing. My legs hurt, but not so much as my back, which apparently doesn’t like it much when I hunch over for 15-20 minutes without a chance to stand up and rest a bit. How do those bicycle racers stand the mountain stages of the Tour de France, anyway...?

Sometime way later than expected I finally reached the webcam in Tunbridge Wells, where you see the slight diversion on the map, and had some lunch. Then it was back on the road for more climbing and challenging terrain. Most of the way I just huffed and winced and thanked my lucky starts there wasn’t a stiff headwind too. The winds were not much of a factor at all, fortunately. Then, at almost exactly 6pm, right at the last minute, I finally reached the campsite and met the geocaching group having an event there...whereupon I learned I didn’t need to be there at 6pm at all, they were mostly all staying overnight anyhow. But I’m still glad I got there when I did because it gave me the opportunity to set up my tent and then go talk to some British cachers for a couple of hours. One of the cool things about caching is you can just show up anywhere in the world at one of these events and it’s like you’re all old friends getting together for a reunion.

Anyhow, since I had to get up early in the morning for my next day’s marathon ride, I bid everyone farwell at about 9pm and got in my tent, whereupon I dropped off right away. However, the night got pretty cold, and I wound up wrapped in several layers of clothes with my coat over my face. This doesn’t bode well for future camping efforts, but I’ll endure it, I suppose. 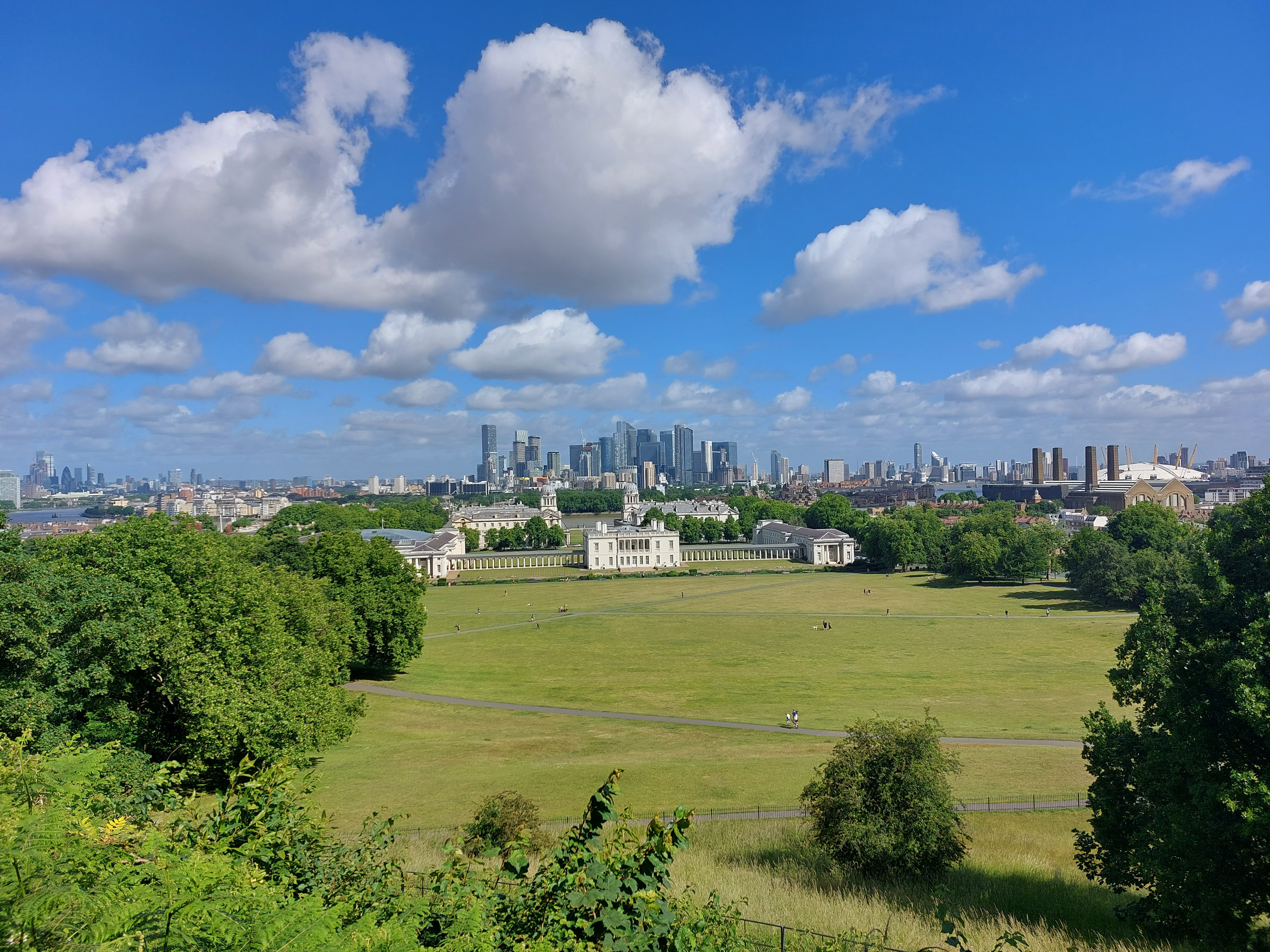 This is the view from the top of the hill where the Royal Observatory is in London. I couldn’t get past the gate up there to get any actual pictures of the observatory itself. Not because I didn’t want to pay, but because I literally couldn’t fit my bike through the gate. That’s okay, I got what I came for, which is this next photo... 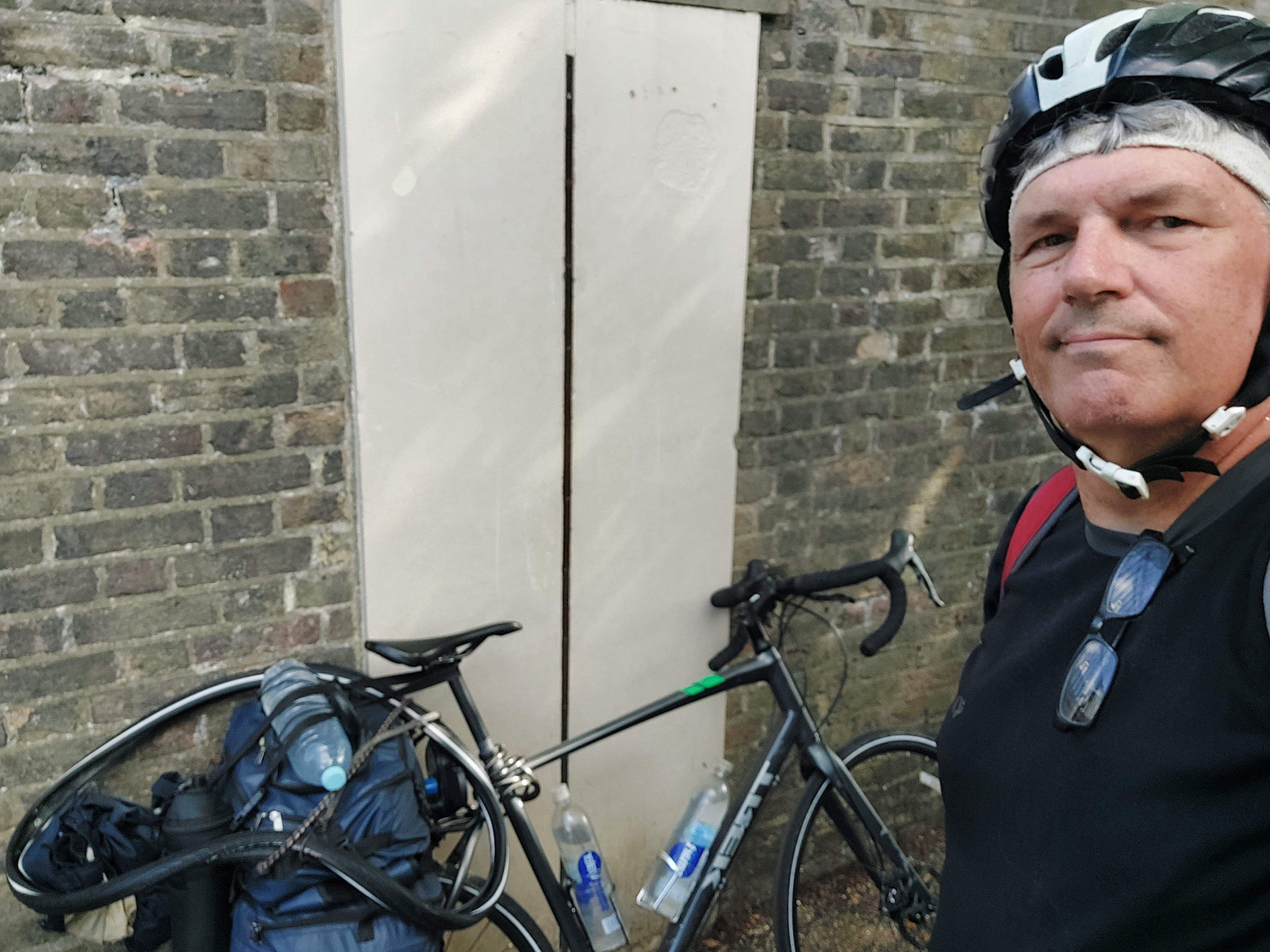 So that line on the wall there is the Greenwich Meridian, the dividing line between East and West. So when you look at GPS coordinates, they are something like this: Nxx xx.xxx Wxxx xx.xxx and the W means anything west of the meridian, otherwise it would be an E. In other words...the rear of my bike is on the west side of the world right now, while the right side of it is on the east. Cool, huh? 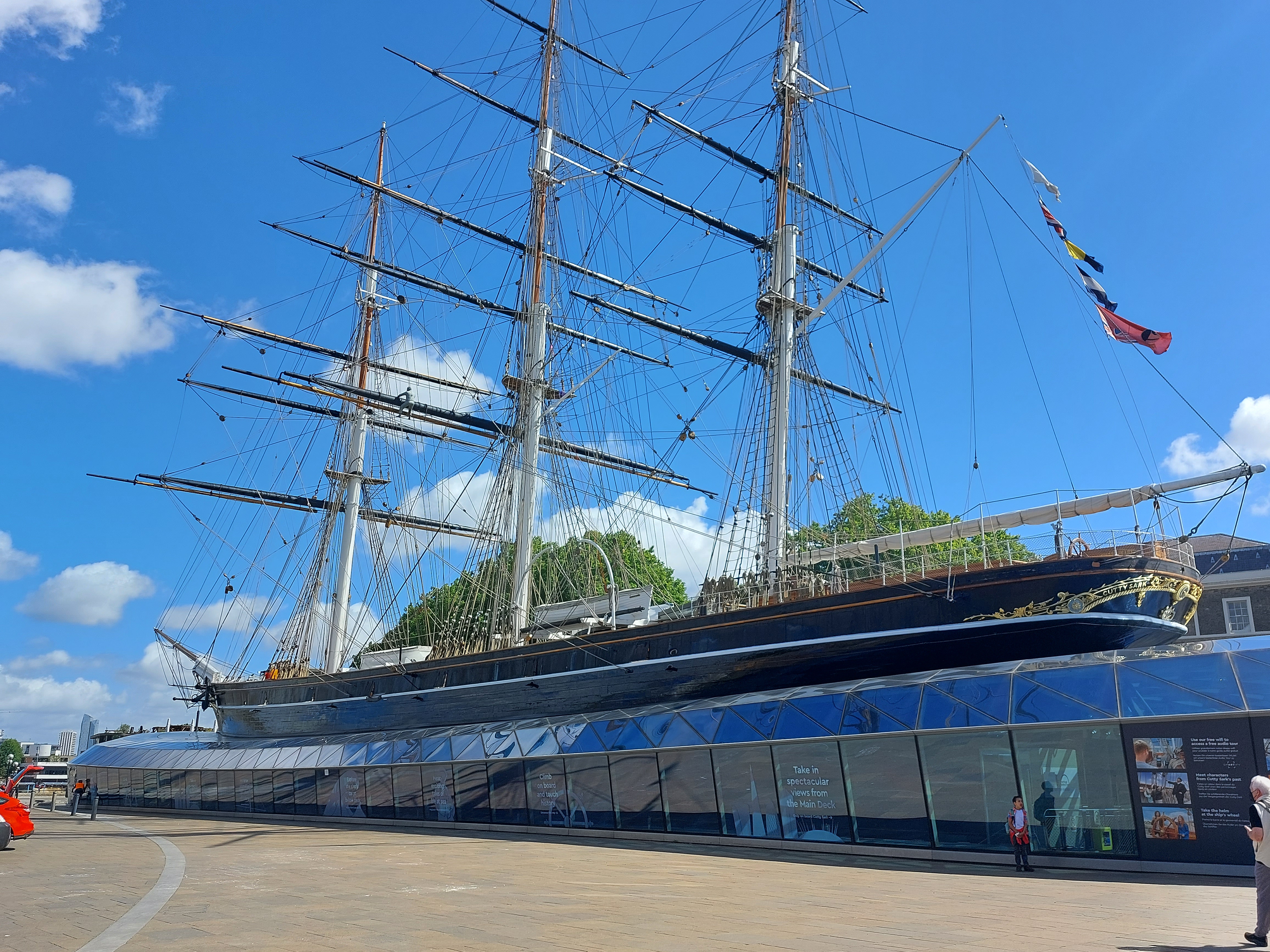 After that I headed down to the Thames again to see this ship, the majestic Cutty Sark. Yes, THE Cutty Sark! There it is, in fully restored glory. I remember building a model of this when I was a kid. Built it terribly, mind you, but there you are. 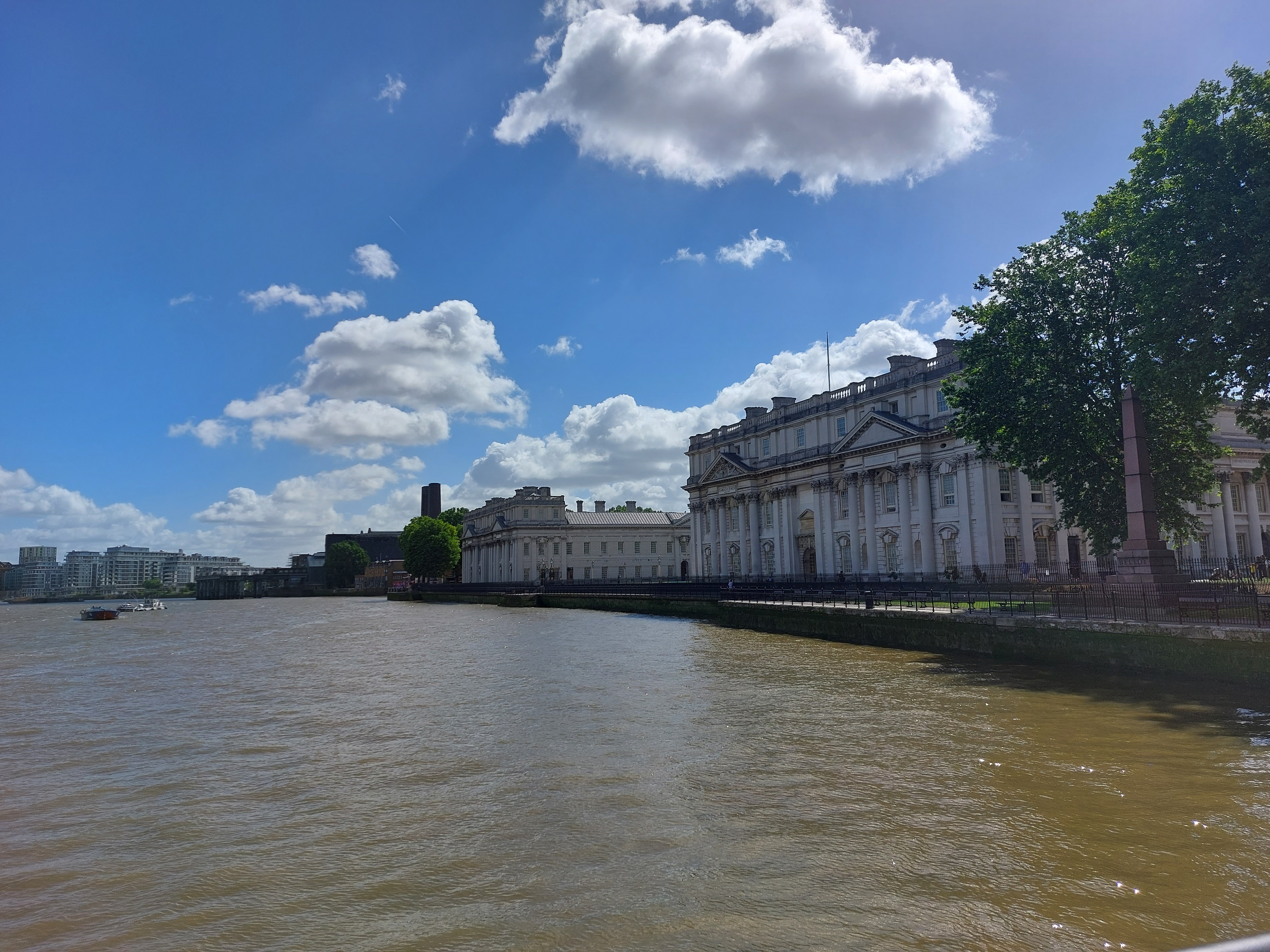 Riding along the Thames is fun because you never know what kind of amazing architecture you’ll see next. 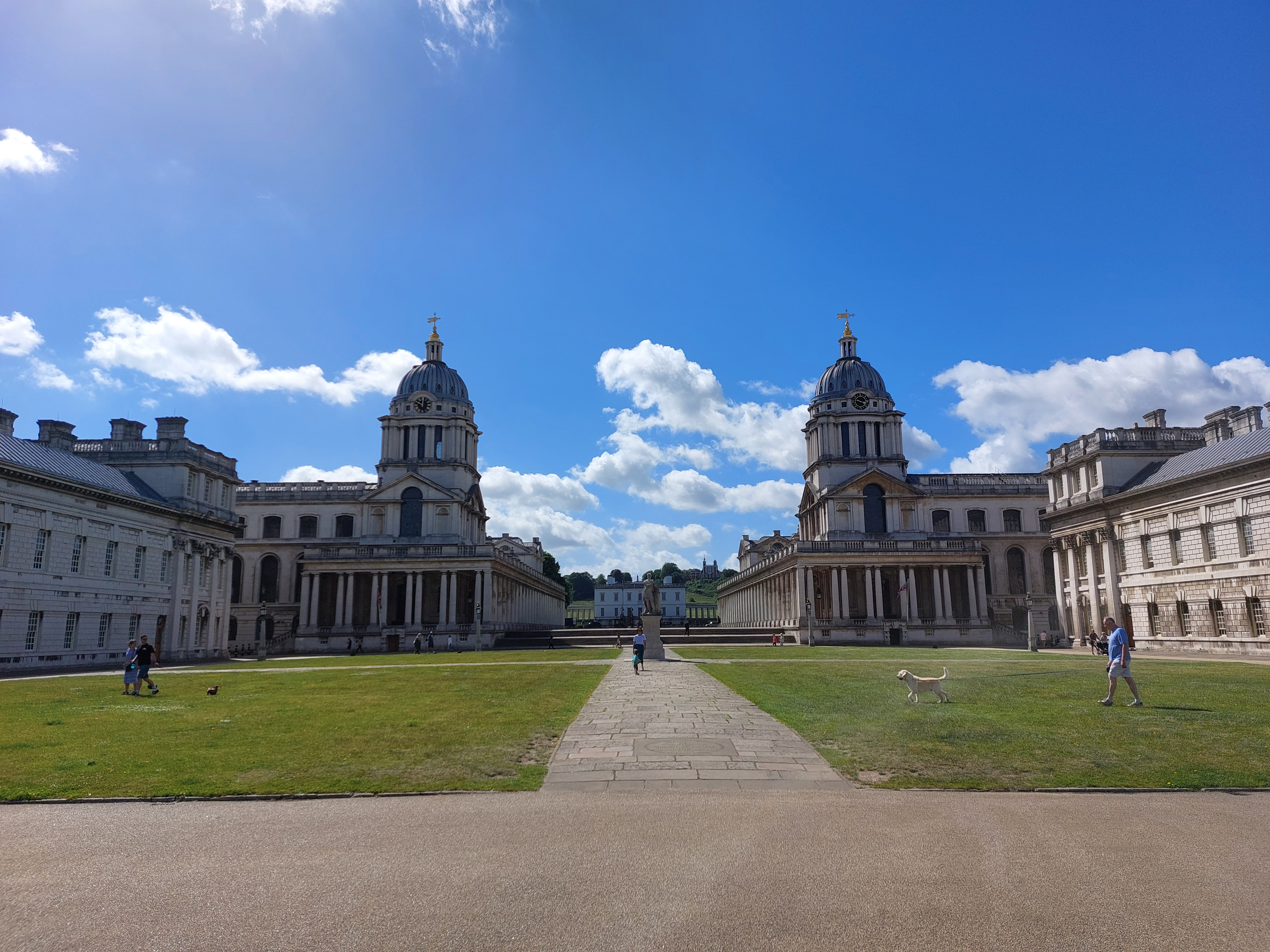 See, that’s what I’m talking about. 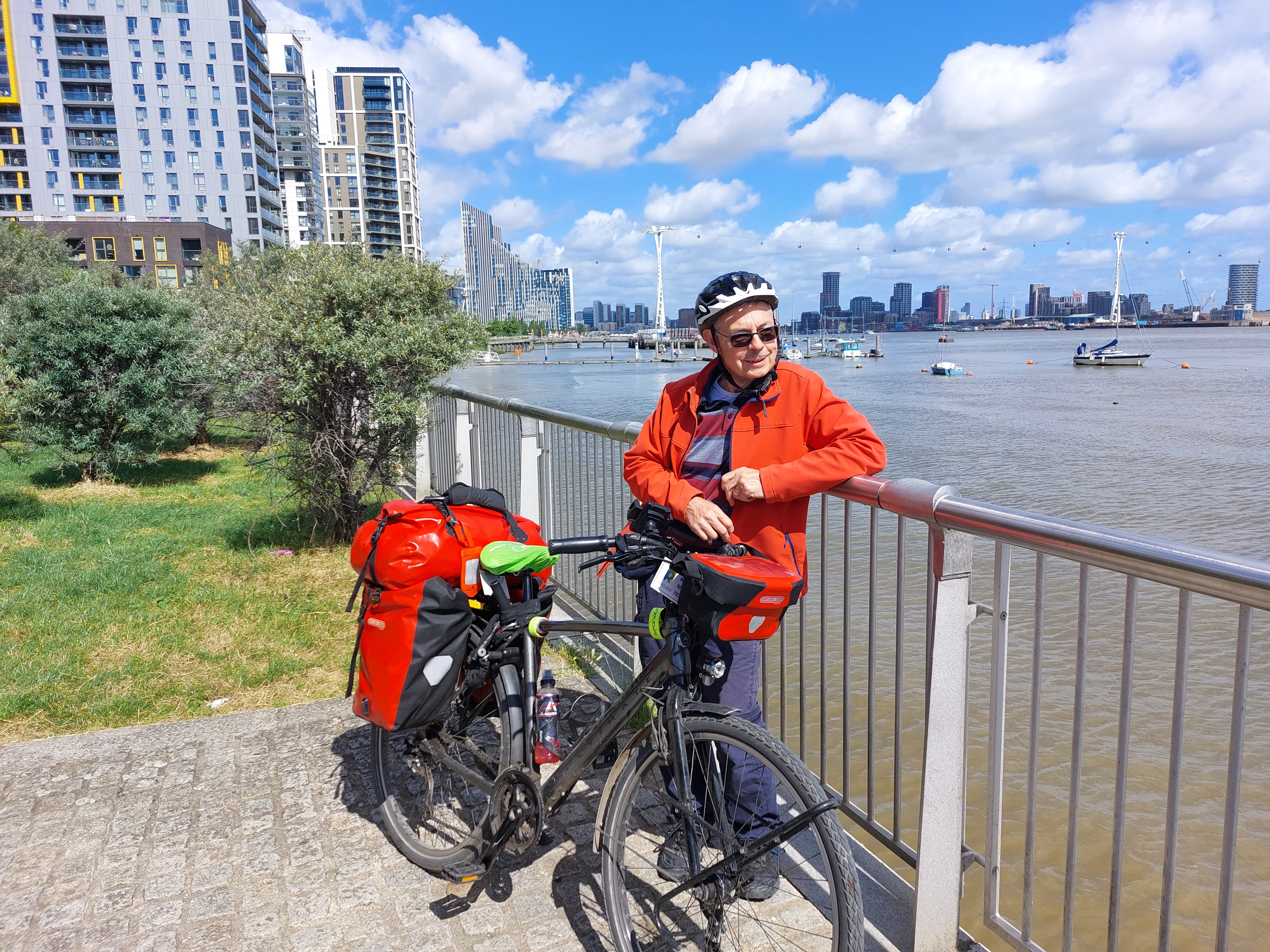 Along the way I ran into my first fellow bike tourist of the trip. This is Ronnie from Belgium. He came over on a ferry and is riding through southern England but only to the west side, then he intends to take a train back to where he started...if there isn’t a rail strike, that is. Good luck with that! 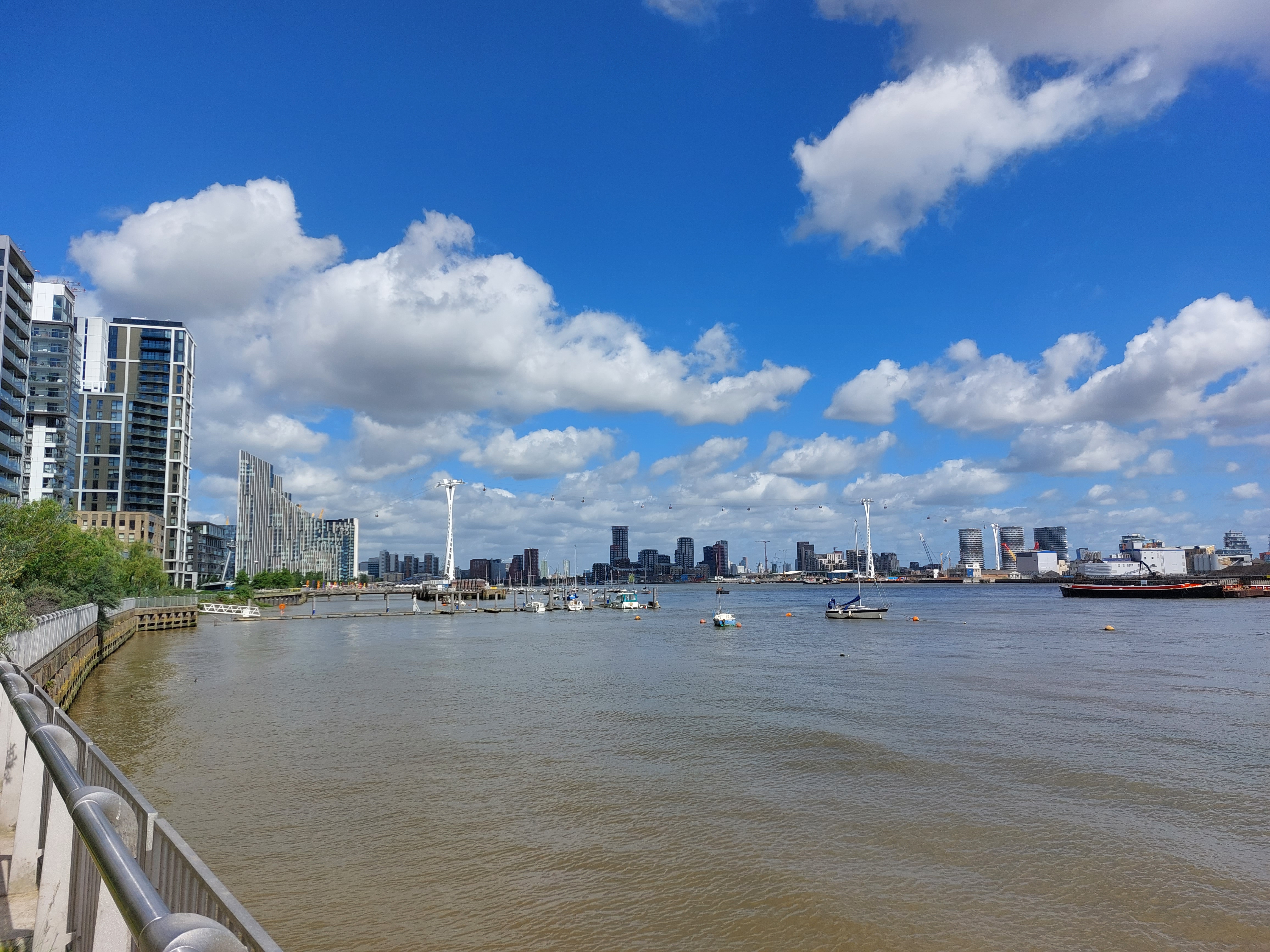 Here’s a better shot of the Thames from that spot. 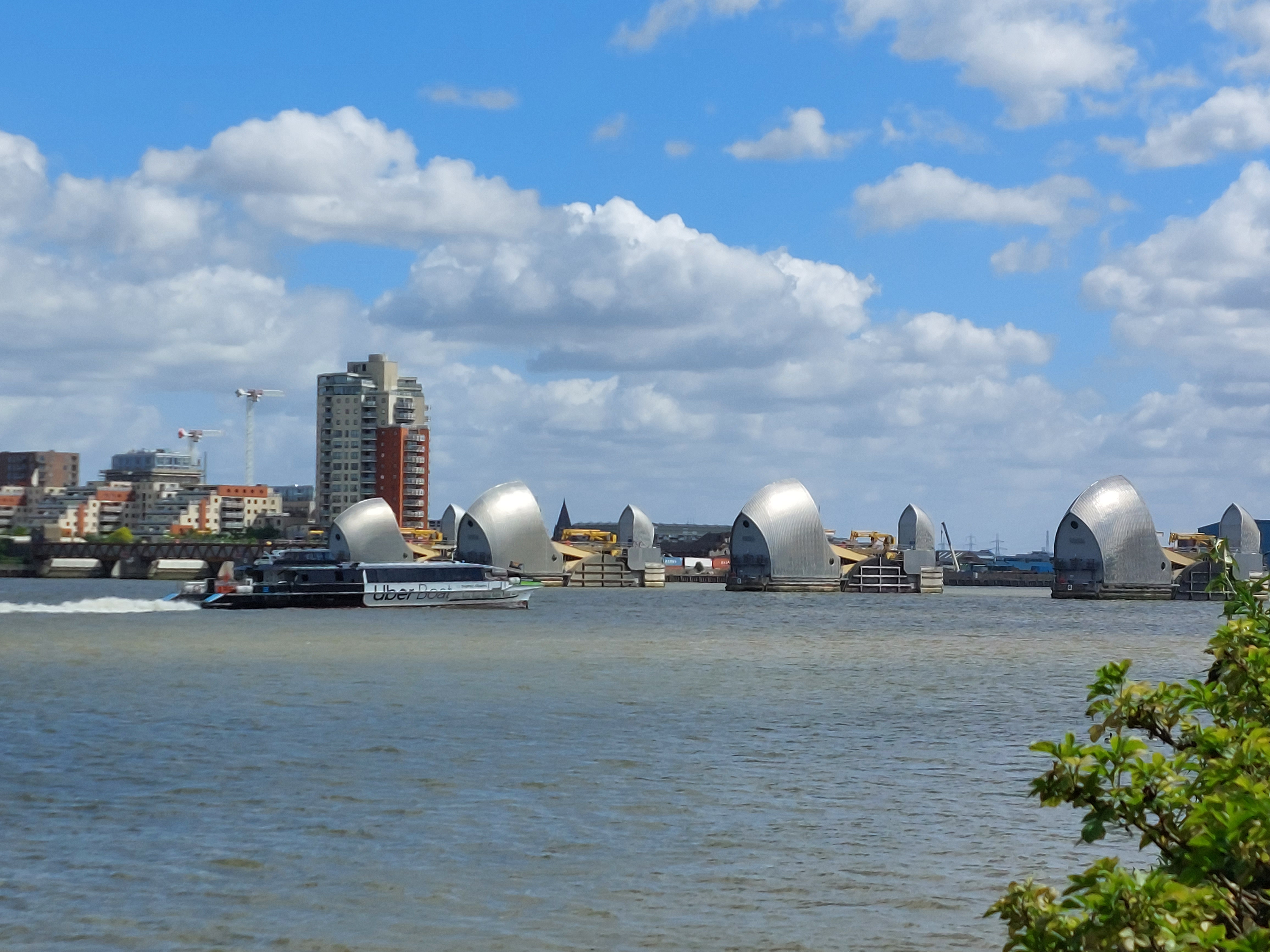 One last shot of the Thames, then it’s time to move inland. I’m not sure what those silver things...are...wait a minute, Uber has boats now? 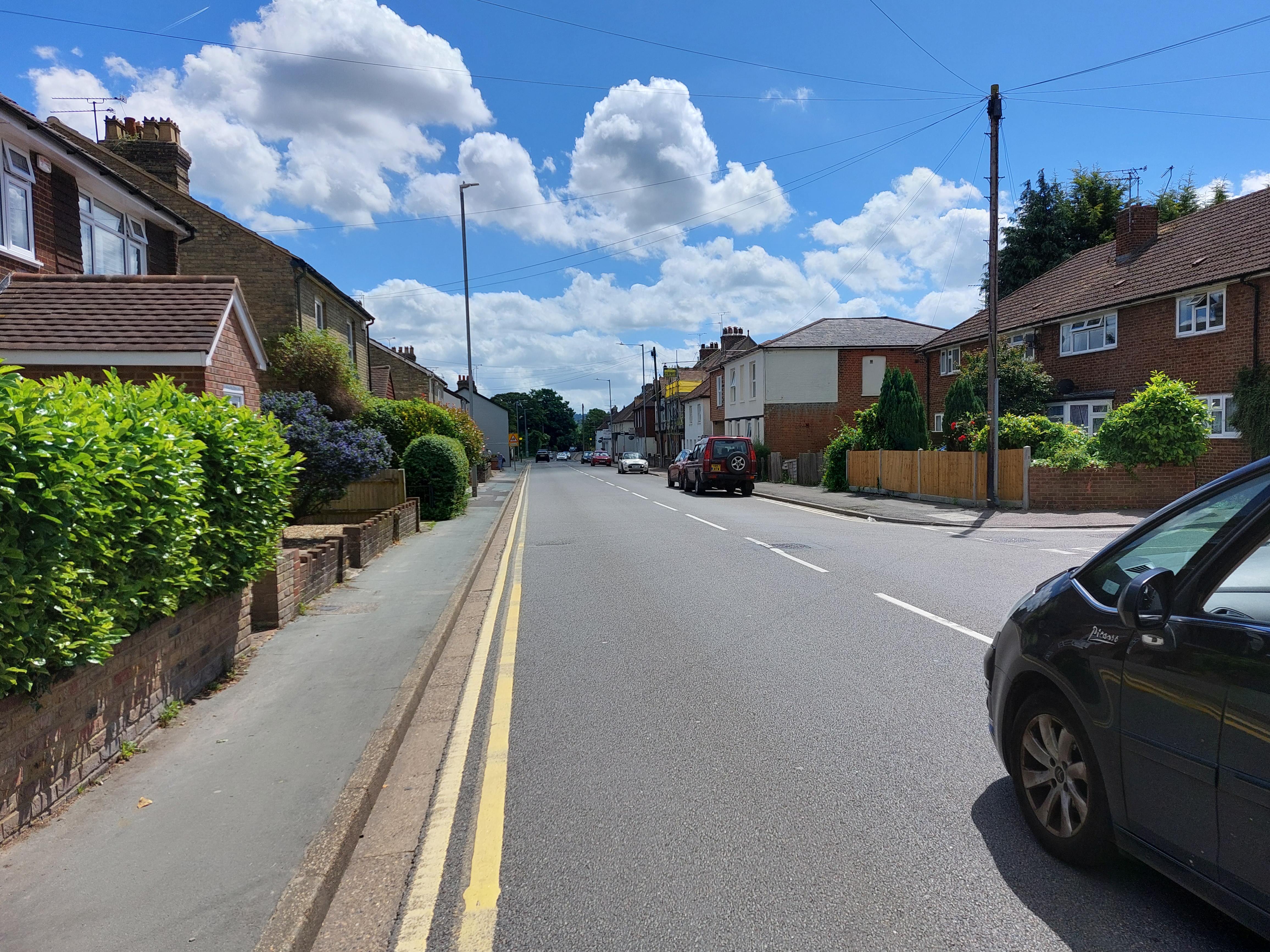 Okay, here we go. This is the typical sort of town I rode through. No shoulder really, and that path there is a trick...it’s not for bikes. It gets really confusing sometimes trying to figure out when I can or should be on the side paths. Oh well, at least people go right around me most of the time. (Mostly.) 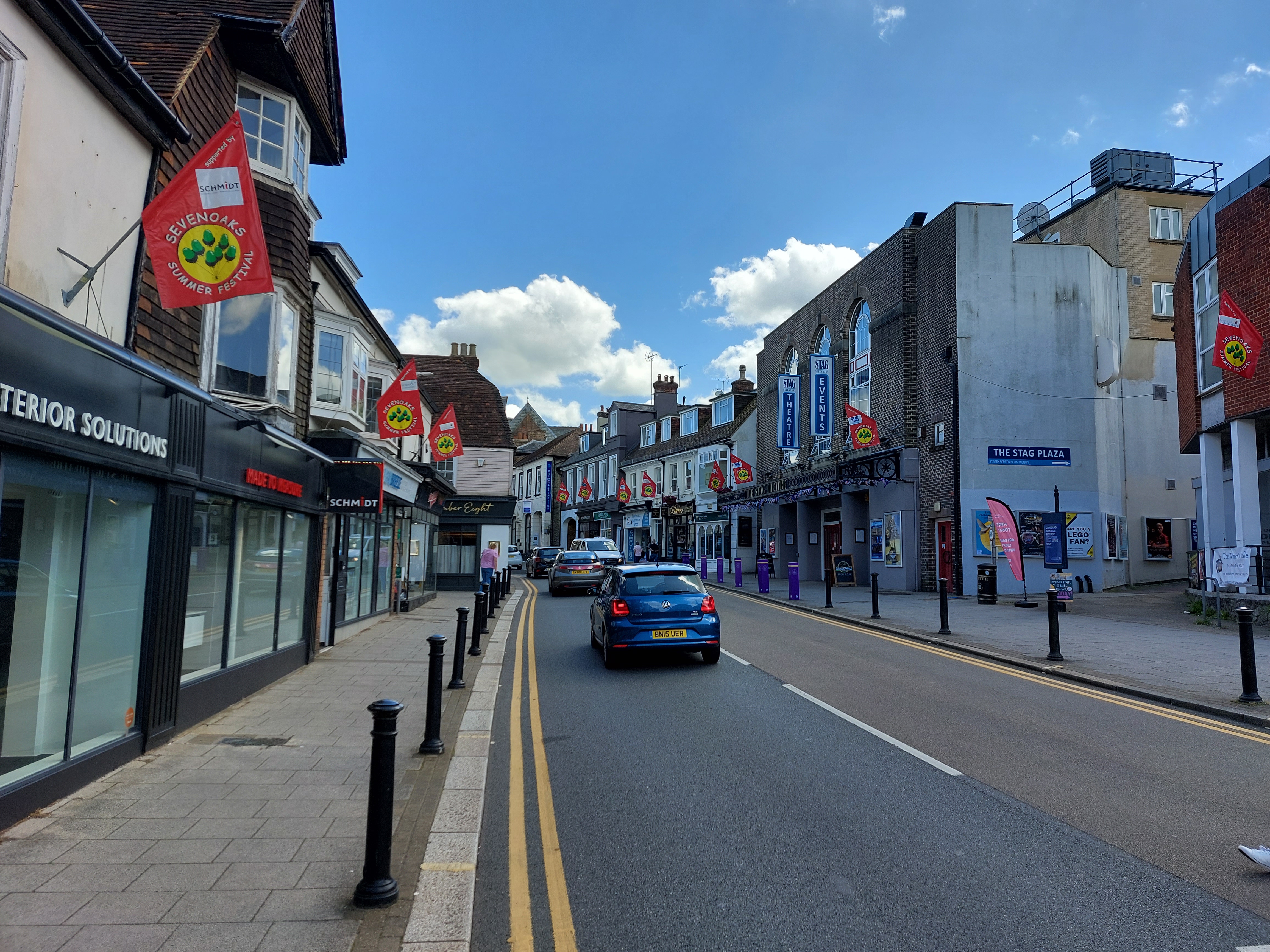 Another typical town scene. This is Sevenoaks, which was about 2/3 of the way to the webcam in Royal Tunbridge Wells...

And here it is. This webcam geocache required that you put your hands up in the air so there I am, like I just don’t care. Right in front of a business with a dozen people inside watching. Sigh, the things you do for geocaching... 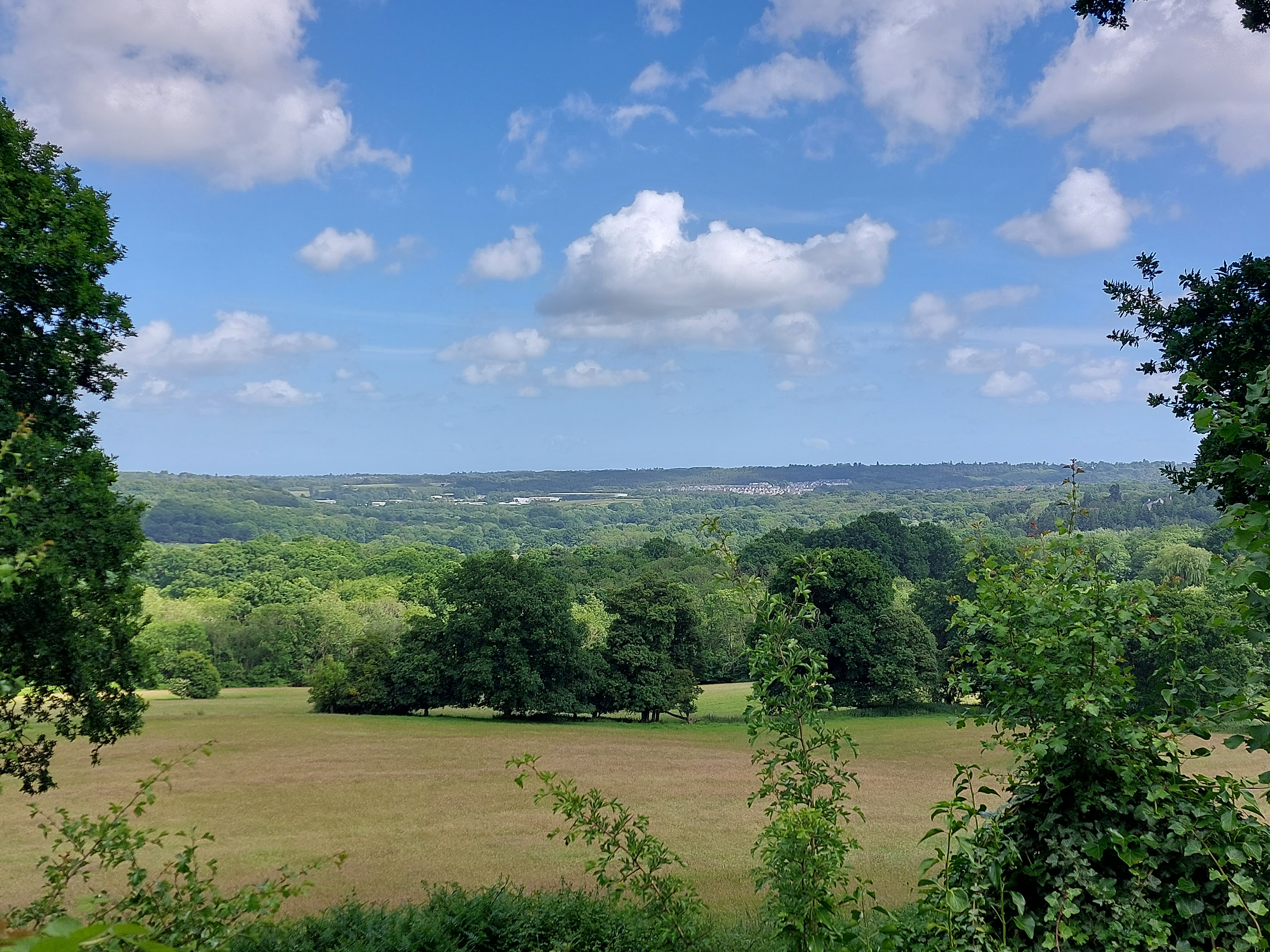 Now back to the road. There weren’t a lot of scenic views to be had, mostly because of heavy foliage, but here’s one of the better ones, looking out from the top of one of the downs. 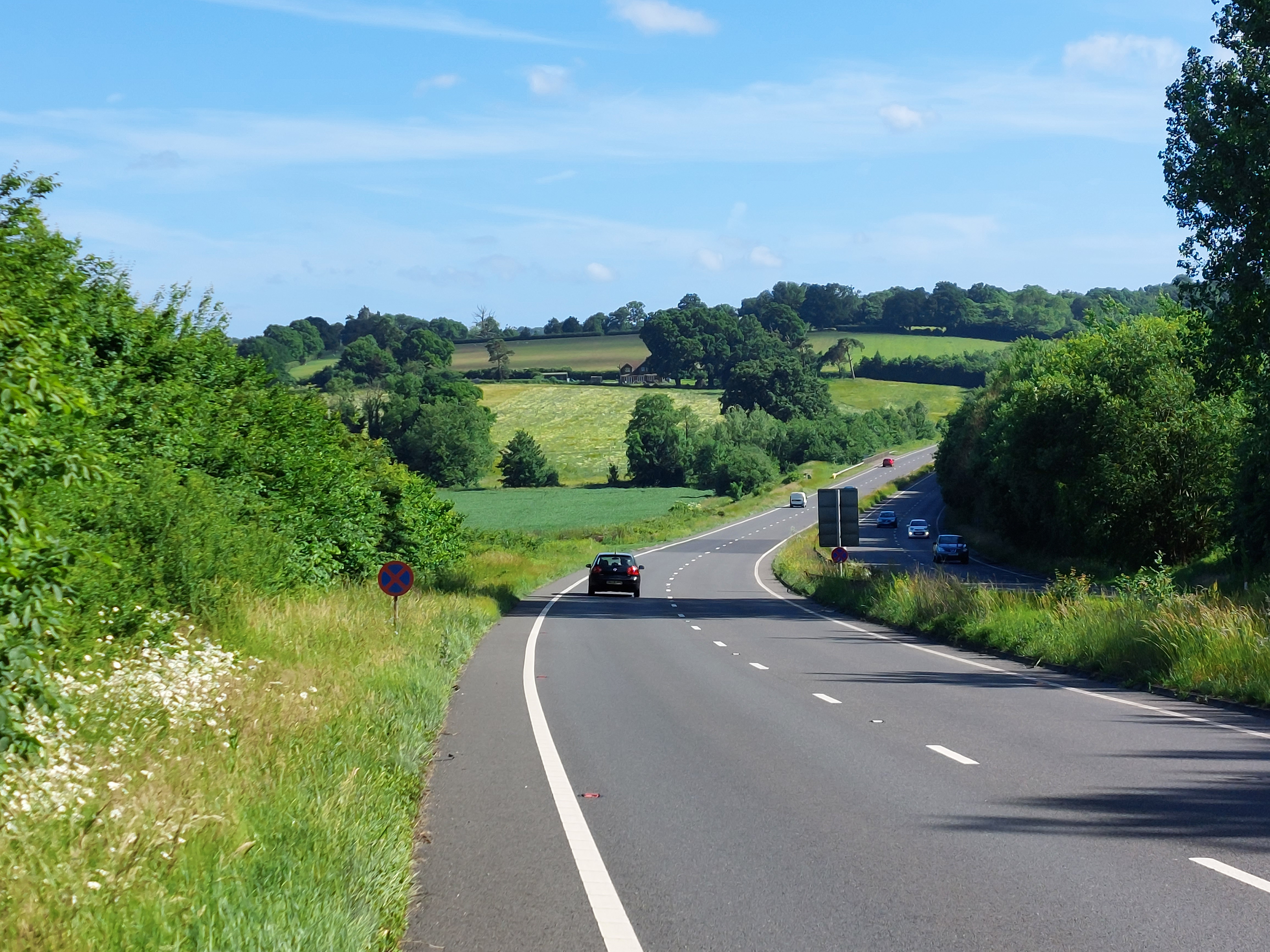 Sometimes the roads would randomly turn into highways without warning. Apparently it’s legal to bike on them, but it’s quite nerve-wracking. Plus I never saw any other cyclists doing it so I really felt out of place. However, I had police pass me a couple of times without pulling me over. I’m going to try to avoid this as much as I can in the future. 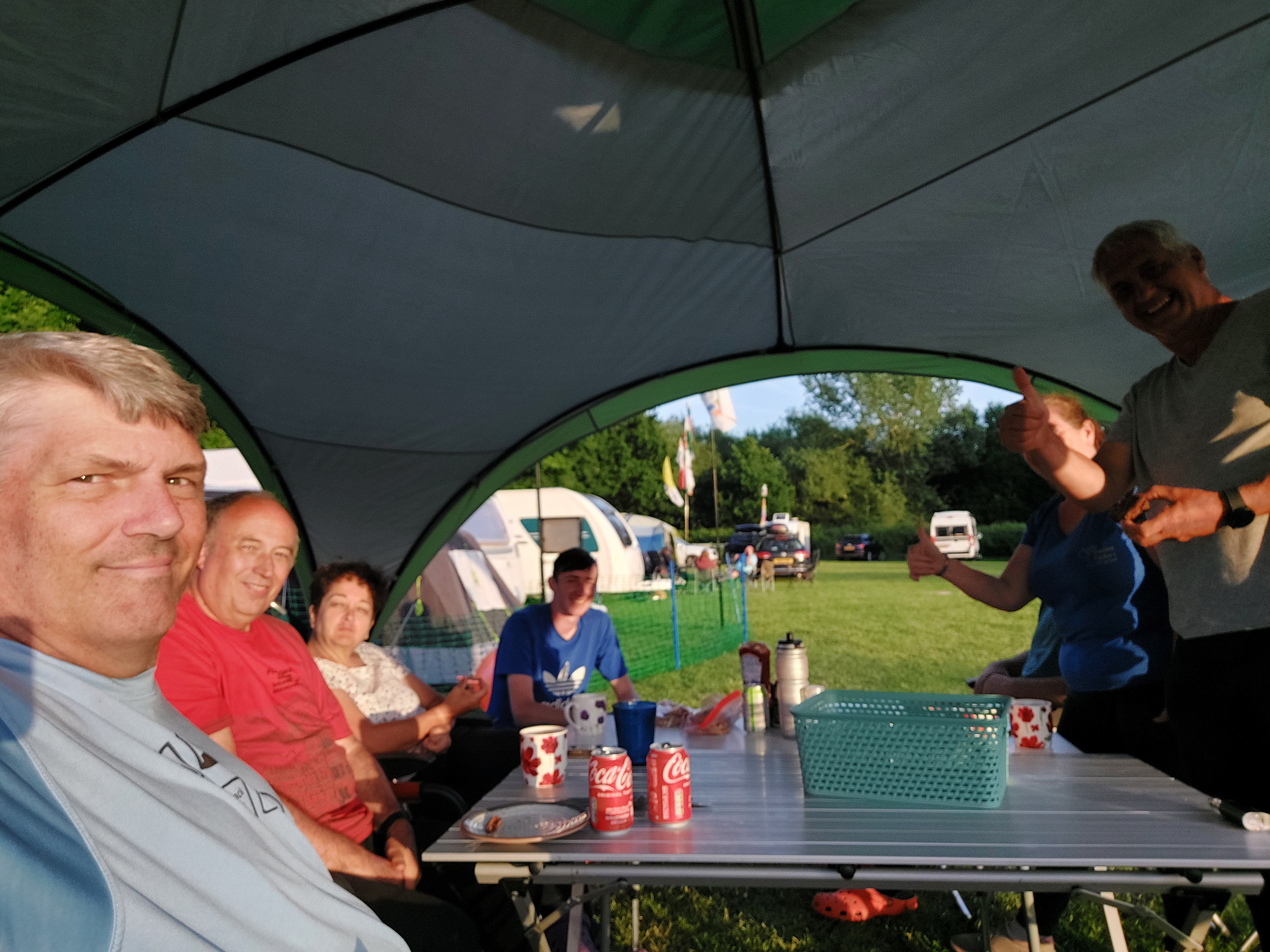 And at last I made it to the campsite for an enjoyable evening with some local geocachers. Thanks for your hospitality, everybody! 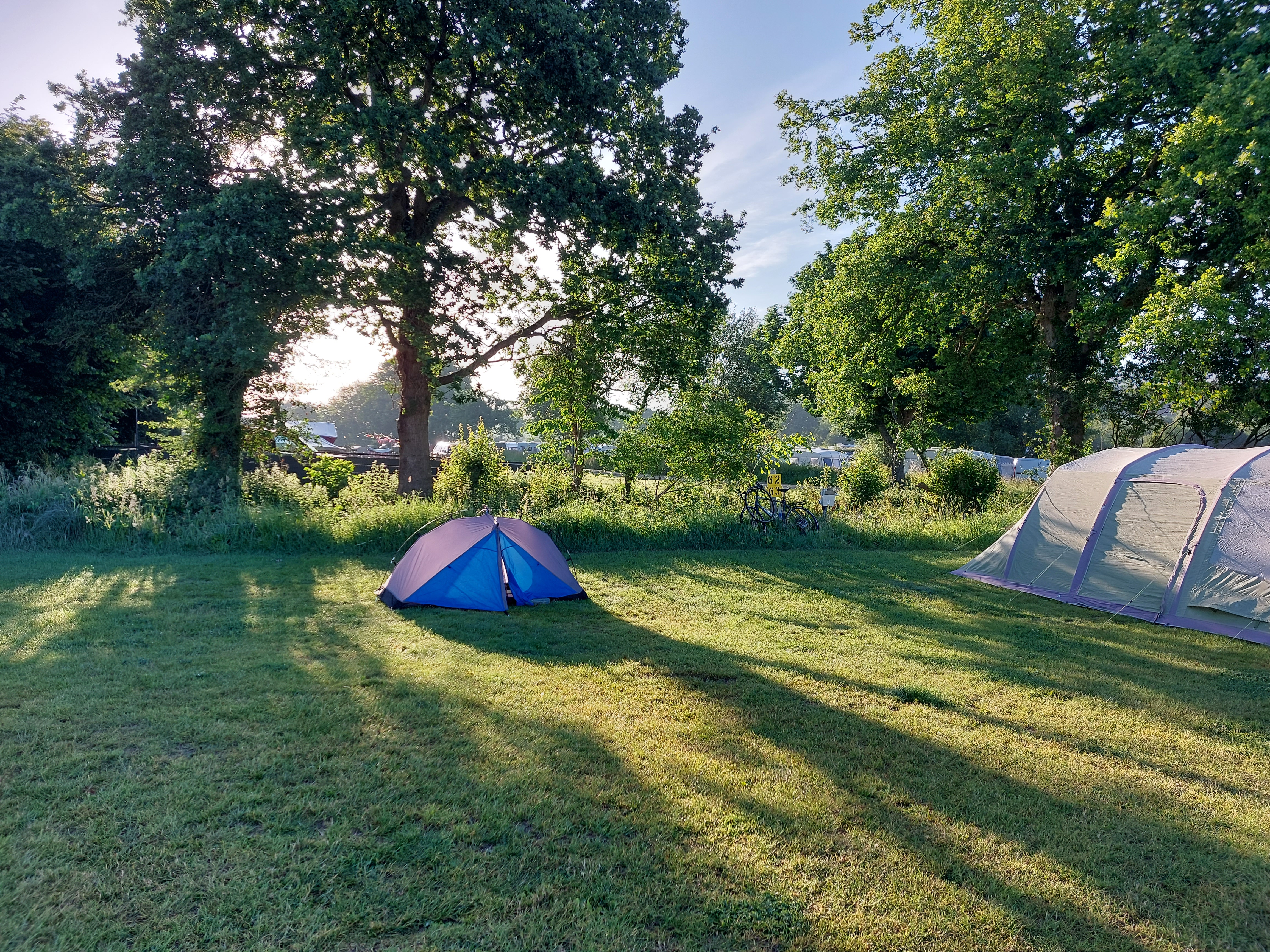 And there you have it, my first night of camping in my new tent.