Several times on previous Bikeabouts, I’ve talked about days that felt like two separate, different bike rides stitched together, with a definite transition point in the middle. That’s what today was like, but both halves had their own set of challenges.

I started out in the morning knowing I had to get all the way to Portsmouth by evening so I could get up early the next day and catch the 0900 ferry to Jersey. Stopping early or somewhere else wasn’t really an option, as it would just force me to get up even earlier the next day. So I started out with a hotel already reserved and focused solely on getting there. I didn’t even find very many geocaches...only 4, I think, and only because I stopped or passed right by them.

So I got up and headed out on Phase I of the ride, which was tackling another set of downs as I powered southwest toward Brighton on the coast, where I expected to have the rest of the day fairly easy since it would be mostly flat. The ride proved extremely difficult, mostly because I hadn’t yet recovered from yesterday’s hills, and had to do almost all the climbing early. Once again it was long, slow, arduous climbs, sometimes for several miles without a break to let my legs and back recover. Luckily none of them were terribly steep, but already I’m wondering how the heck I ever managed some of the climbing days on previous trips. I mean, this wasn’t even 2000 feet of total elevation gain, according to the map, but felt absolutely exhausting. Somehow I muddled through, mostly by telling myself if I could just get to the beach the rest of the day would be easy.

Well, nope, because as soon as I got to Brighton, Phase II began in the form of nasty headwinds coming straight out of the west. So far this trip I’ve barely noticed the wind, but now it came at me relentlessly. The feeling as I set off along the beach bikeway was that I was still climbing hills like the ones back on the downs. So instead of staying on the beach, which would’ve meant a lot of great views and scenery, I turned back inland and rode along on surface streets there, hoping to mitigate the wind with buildings and trees as much as possible. This worked somewhat, although not as much as I would’ve hoped. Progress was very slow and I counted down the miles one by one, hoping I didn’t start cramping up or some worse thing happened.

Finally, after 14 hours on the bike, I dragged my weary carcass into Portsmouth and into the hotel, which turned out to be a tiny add-on to a local pub and they put me on the third floor (with no lift). Even better, the stairs were so narrow I couldn’t take the bike up to the room, so I had to leave it locked in a courtyard outside behind the building. It’s probably just as well because the single trip up the stairs carrying my saddlebags left me gasping for breath on the bed. Eventually I got out of my clothes, drank a bunch of water, and passed out from sheer exhaustion. Luckily the next few days are easy ones because I need time to recover...

Anyway, let’s get the pictures started. 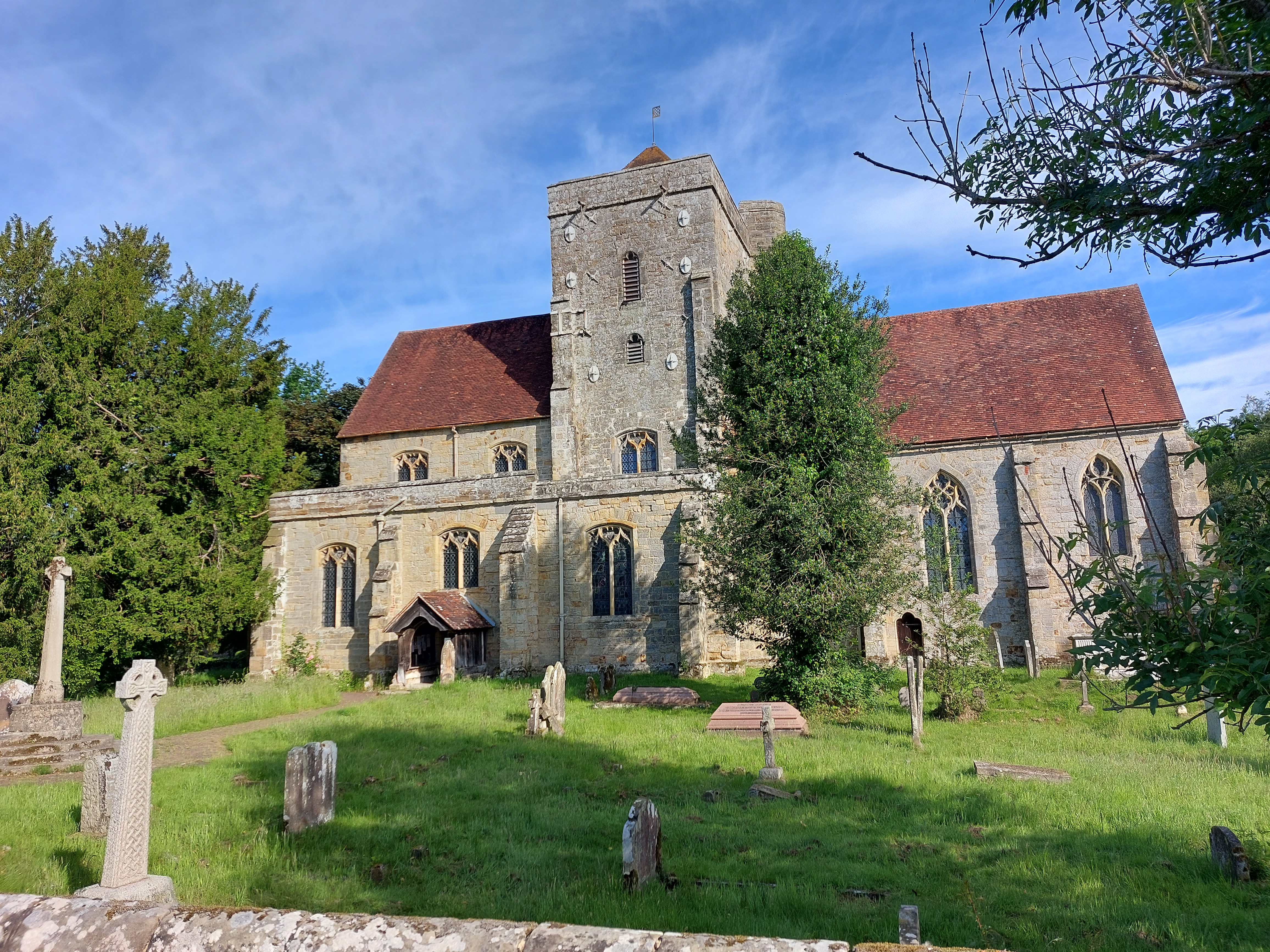 Early in the day I stopped for a quick break next to this scenic church. 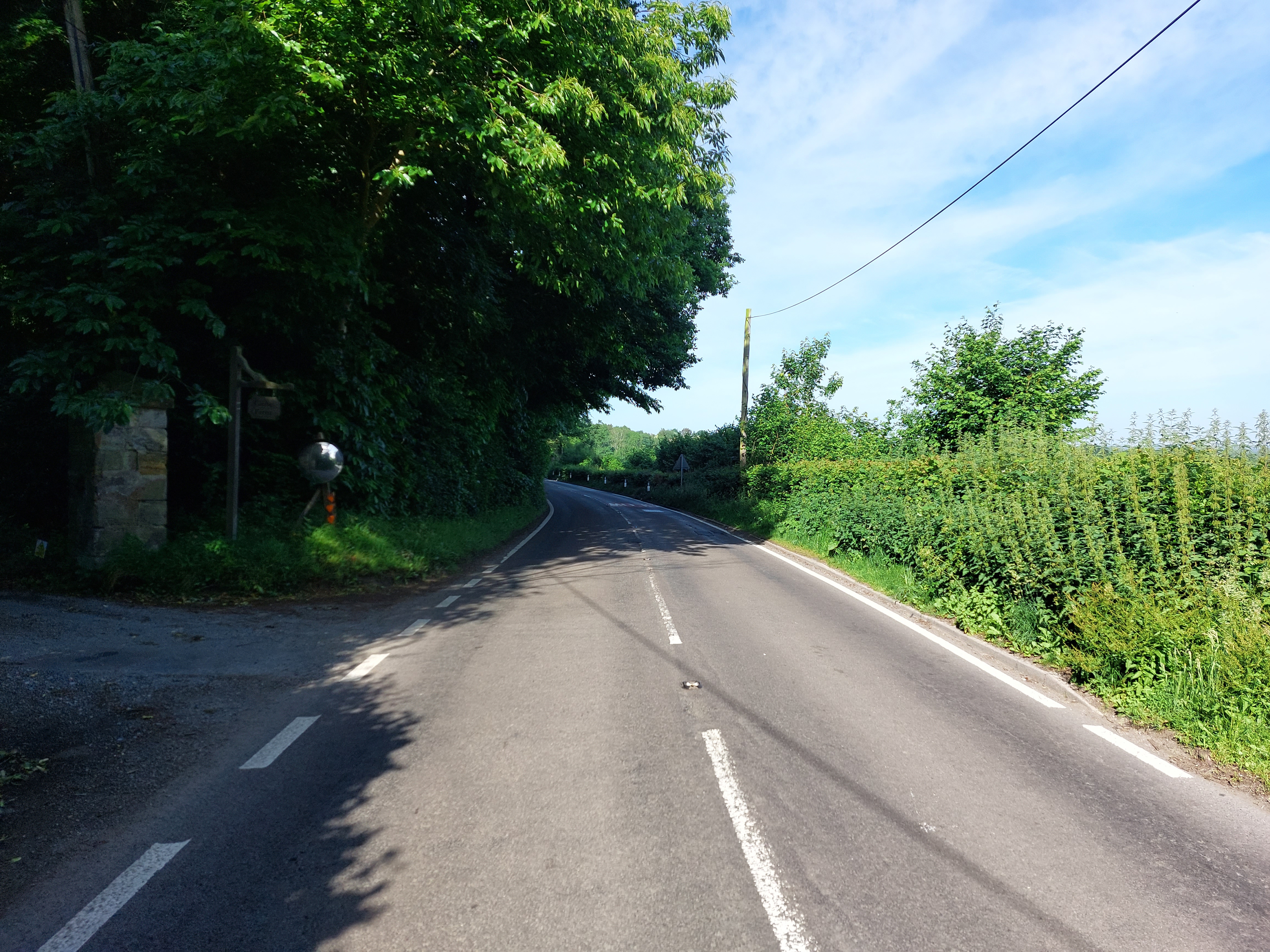 The roads through the first part of the day looked mostly like this. No shoulder, but not much traffic either and anyone who did come along gave me a wide berth. At least, they did when I was out in the country. More on that later... 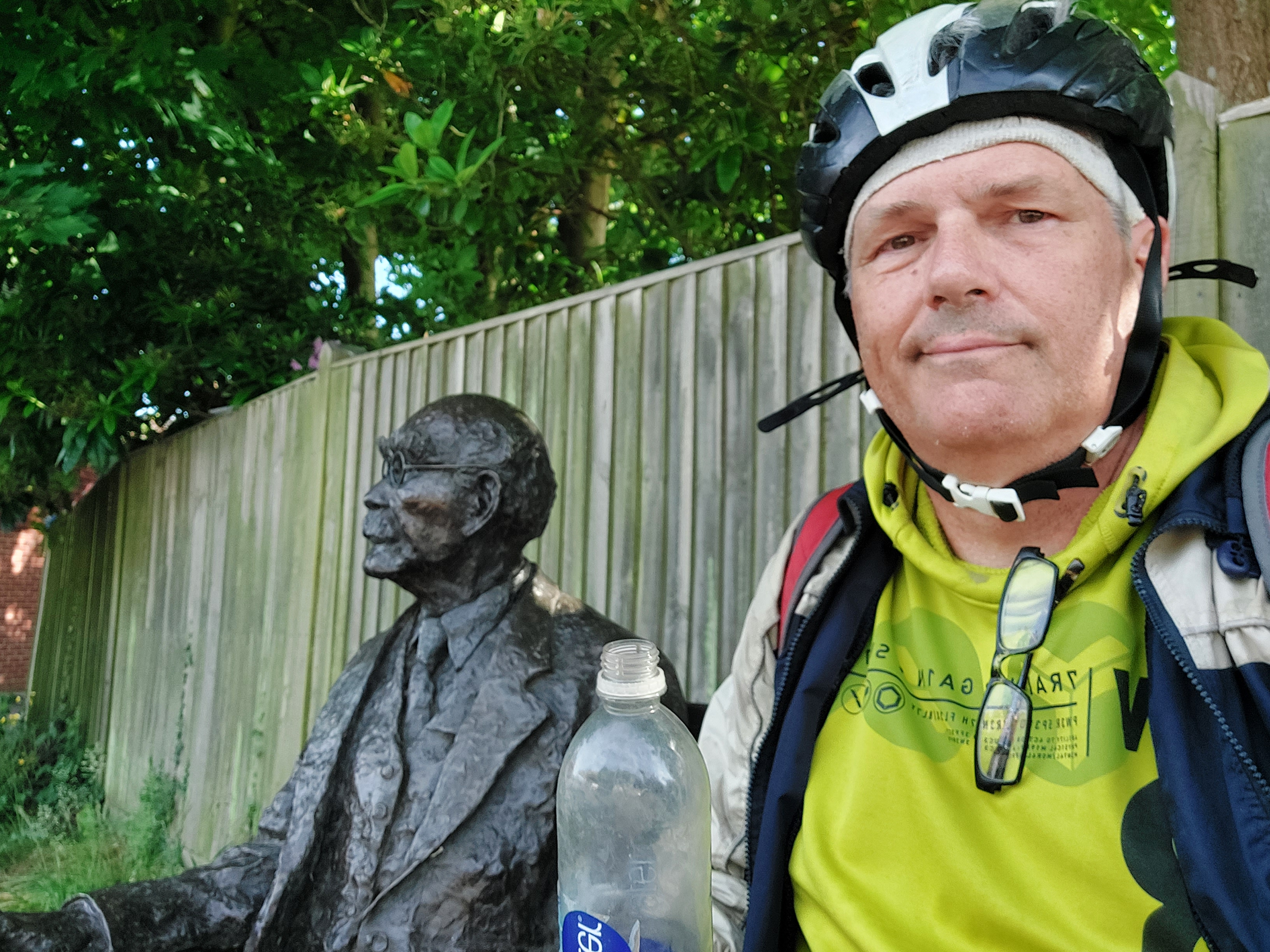 Later on I stopped in the little town of Burwash, where I had a break with Rudyard Kipling (this is his home town). However he just sort of ignored me. Probably trying to come up with a sequel to “The Jungle Book” or something. I left him to his pondering and rode on. 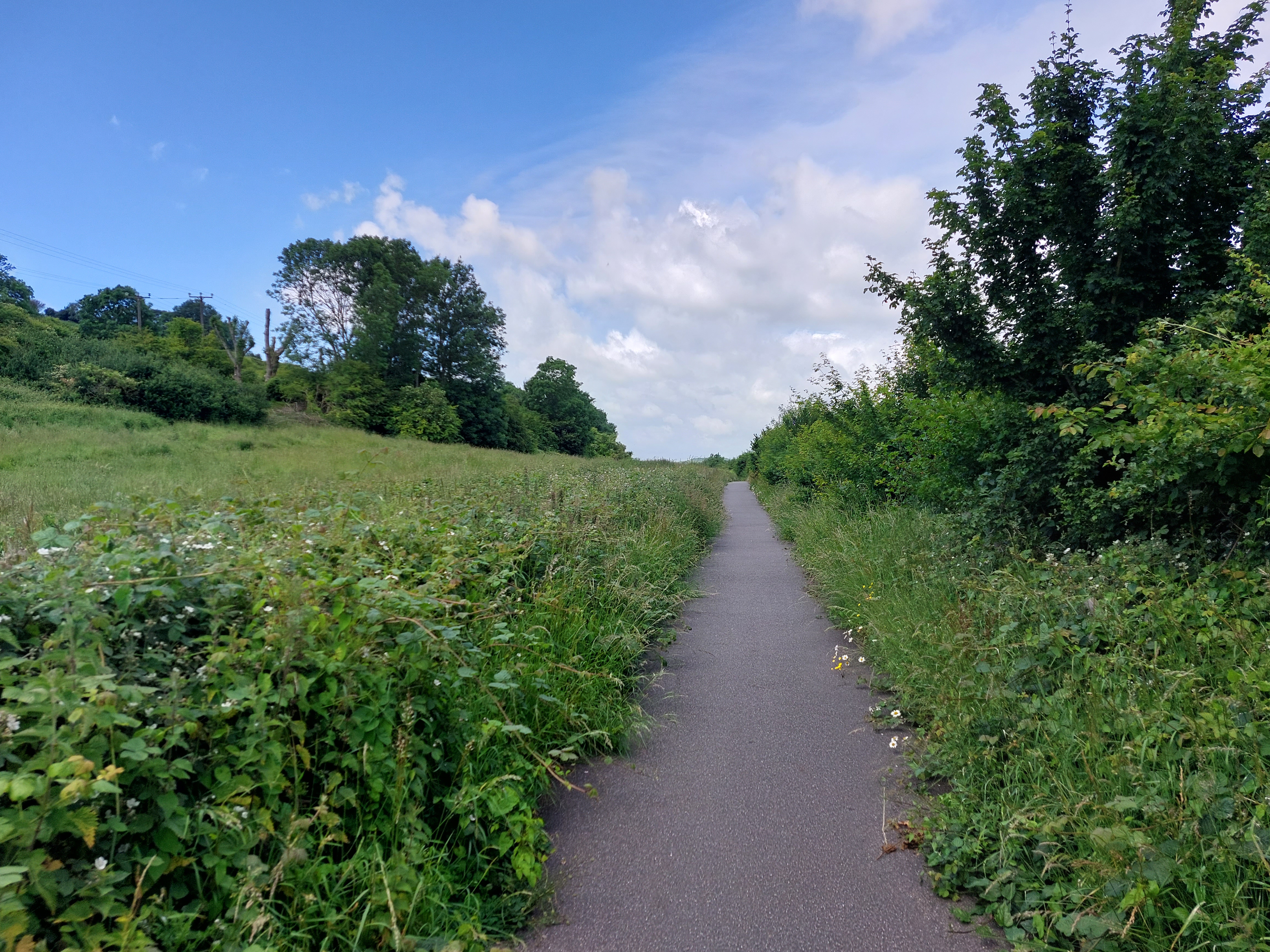 Every so often I will get an actual bike path. Not for long, but I enjoy them when I find them. They’re so narrow compared to back home, though...any time another cyclist came along you really had to squeeze to let them pass. 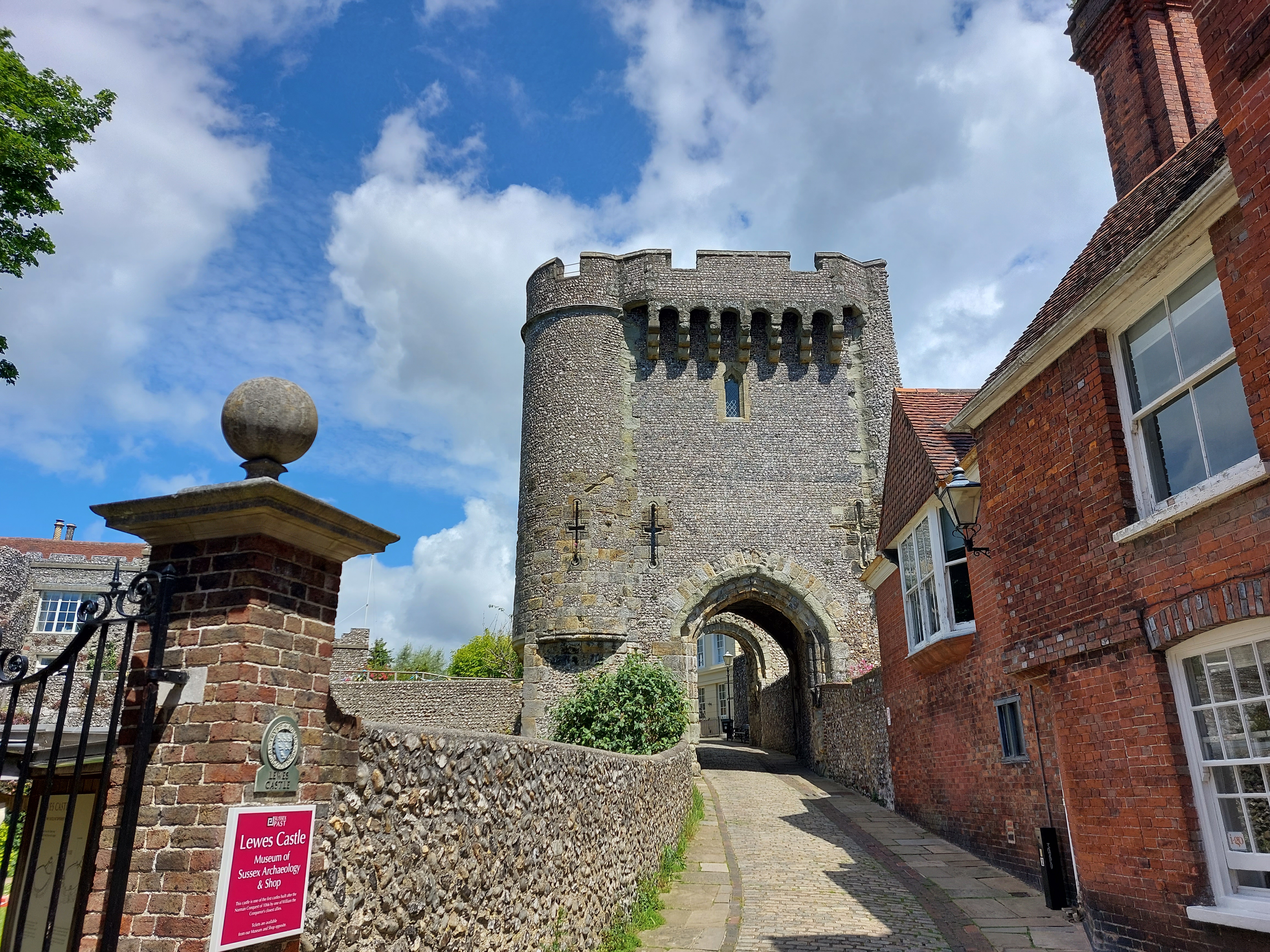 As the day wore on I finally came to Lewes (pronounced like “Lewis”) which featured one of the worst climbs of the day, and this castle. My first castle view of the trip! 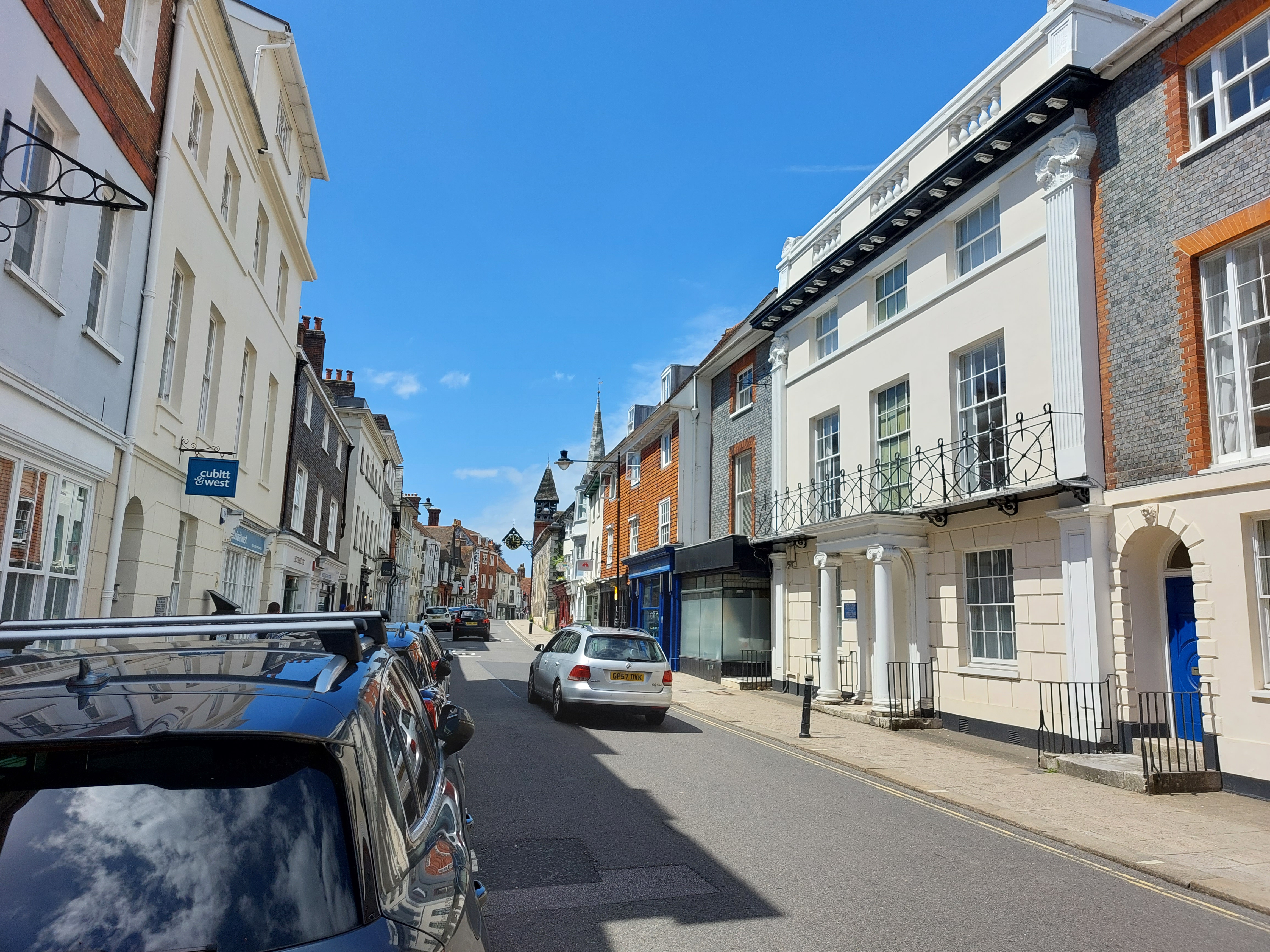 Here’s what it looked like riding through Lewes. Yep, that is a two-lane road. Such things are typical in Europe which is why all the cars you see are small and narrow. 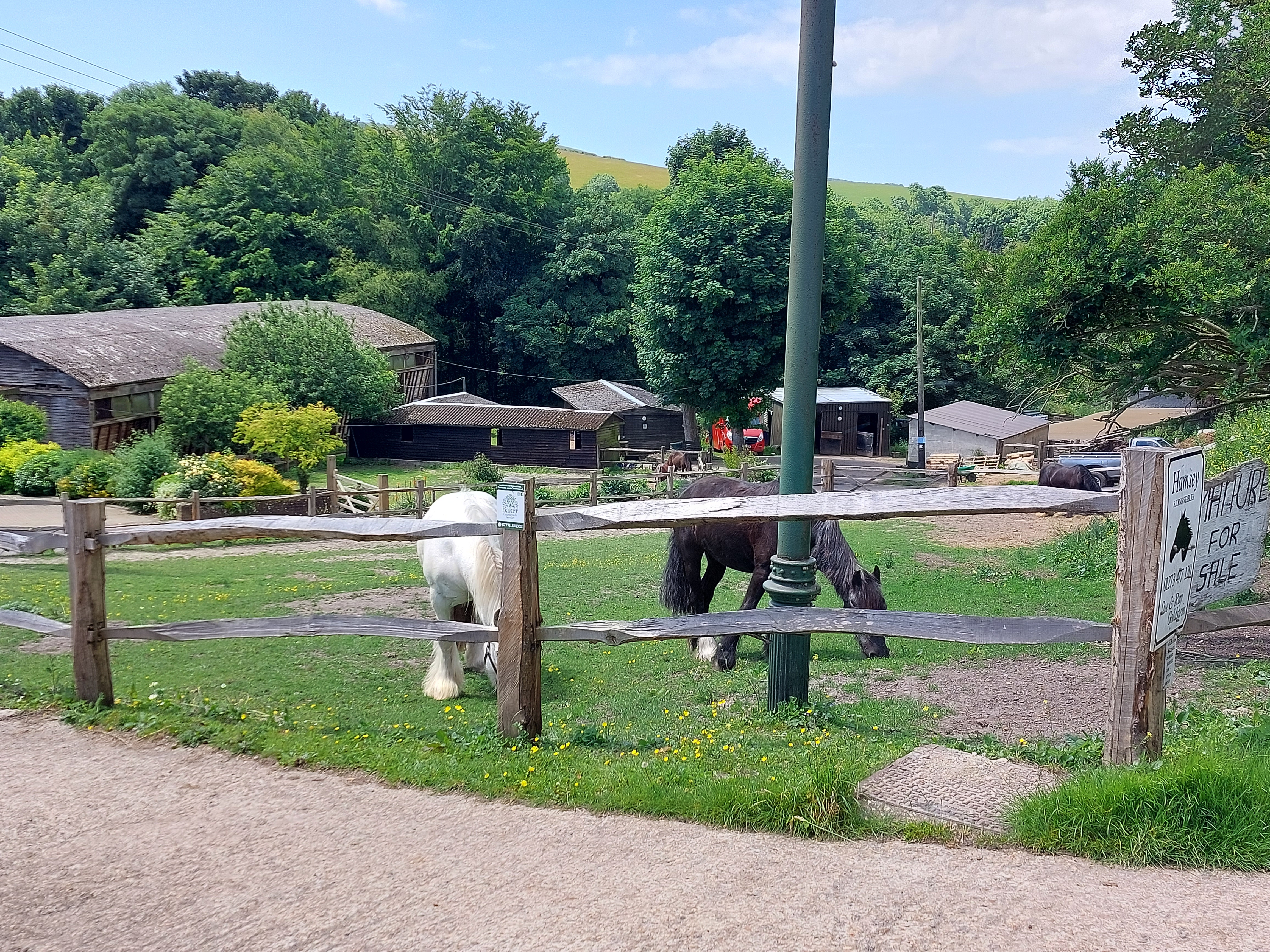 Horses are all over the place out here too. Here and there I’d see horse farms and such. They always make for good pictures. 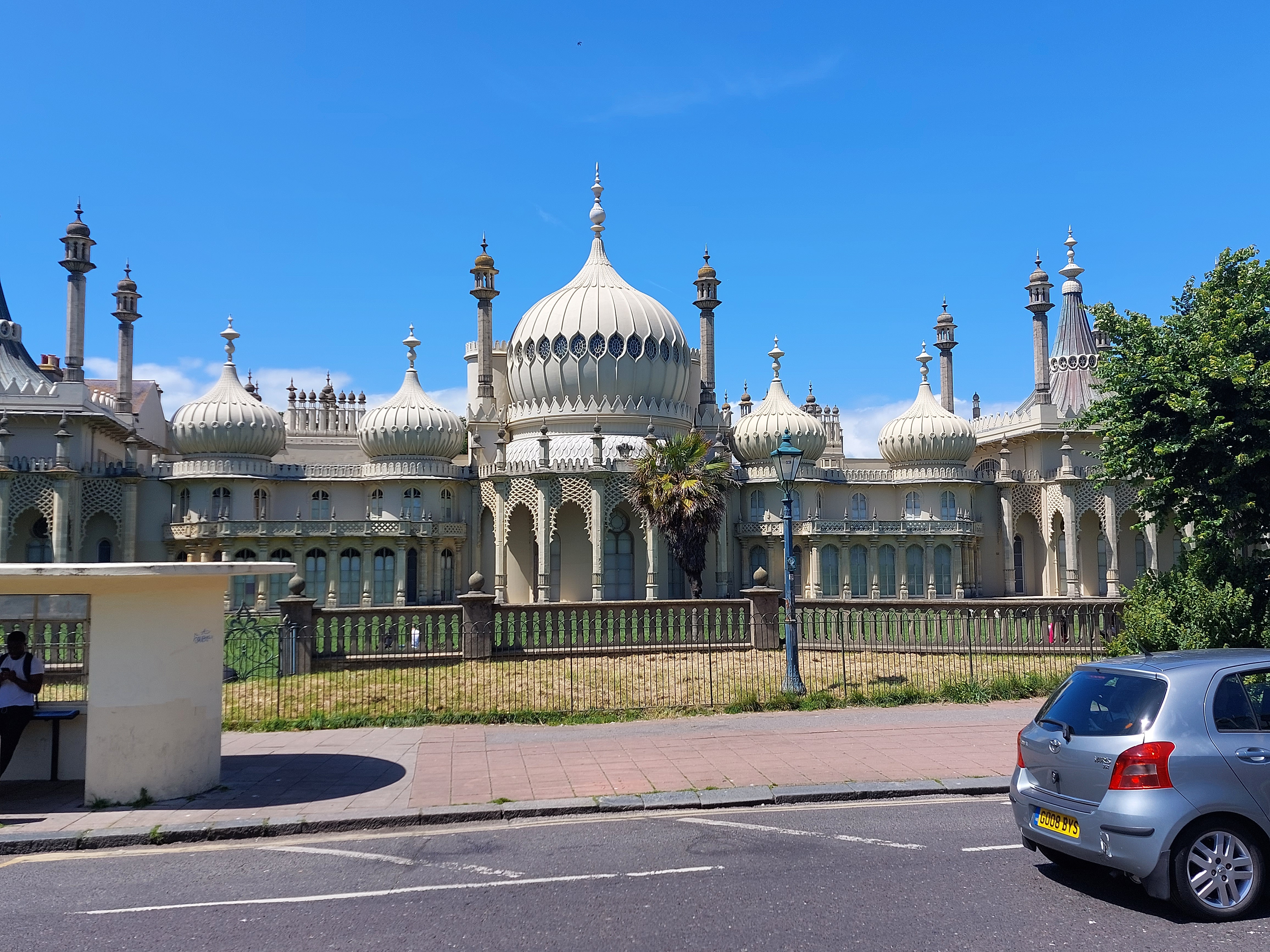 Approaching Brighton, I came upon this magnificent structure, the Royal Pavilion, once part of the local palace and now a museum. 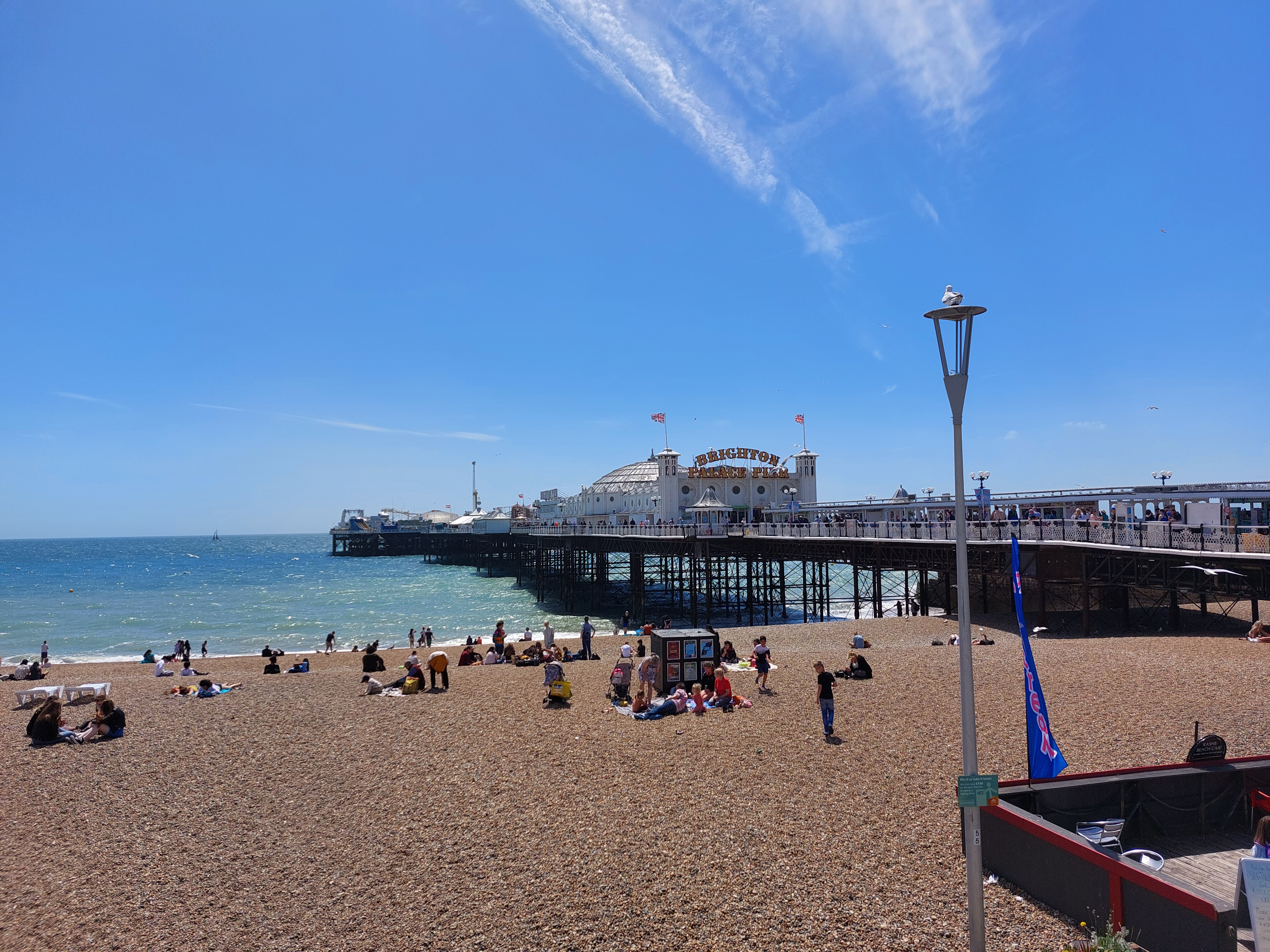 At last, the beach! Time for lunch, and no more hills! The only problem was that fierce wind coming from the west (take note of the flags on top of the pier). Otherwise it was a lovely day! 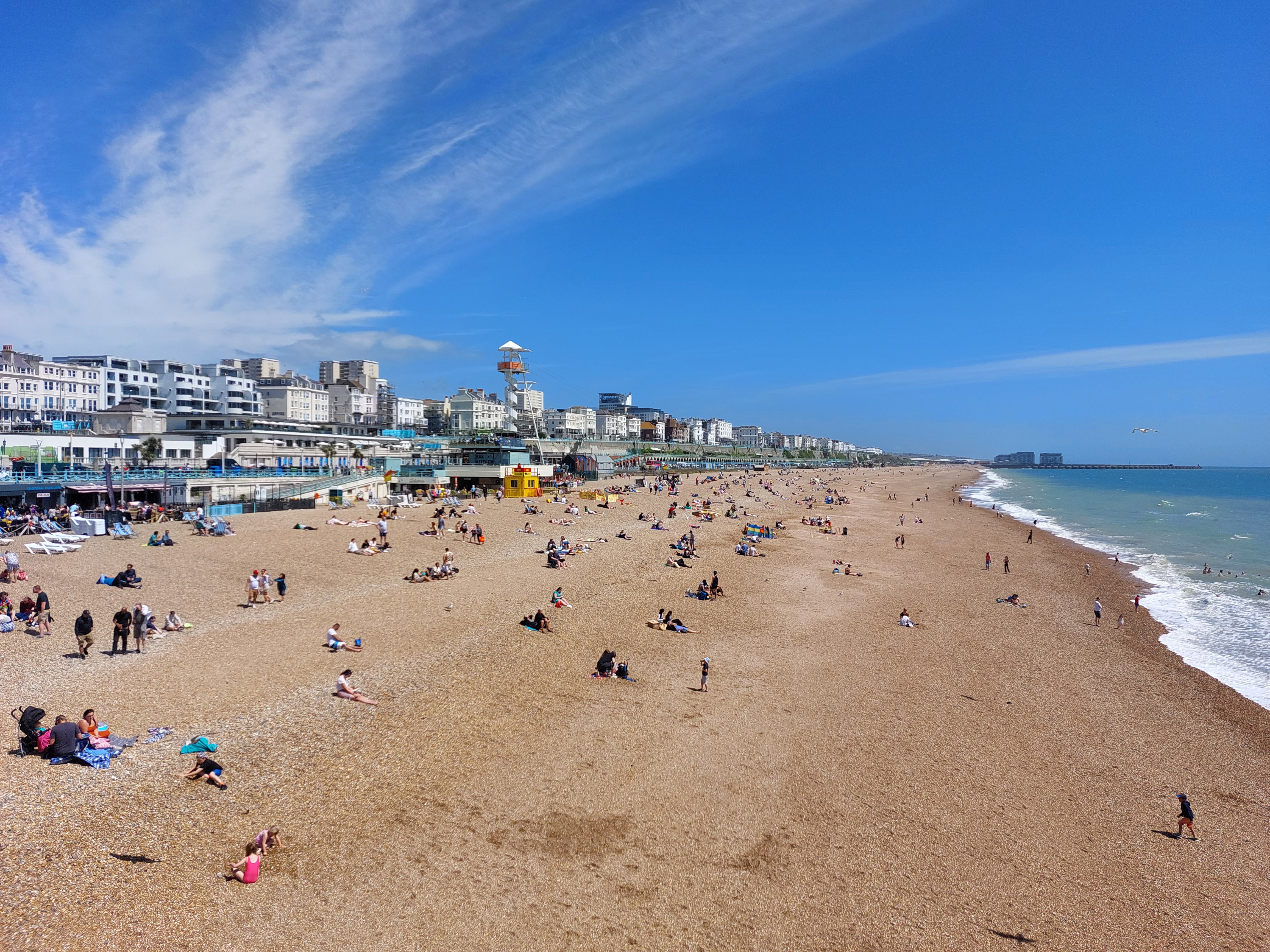 Here’s a view looking east (the direction I wish I was going because that would’ve made a great tailwind). The sand is not very soft, though...it’s made up mostly of coarse crushed shells. I wouldn’t want to walk on it barefoot. 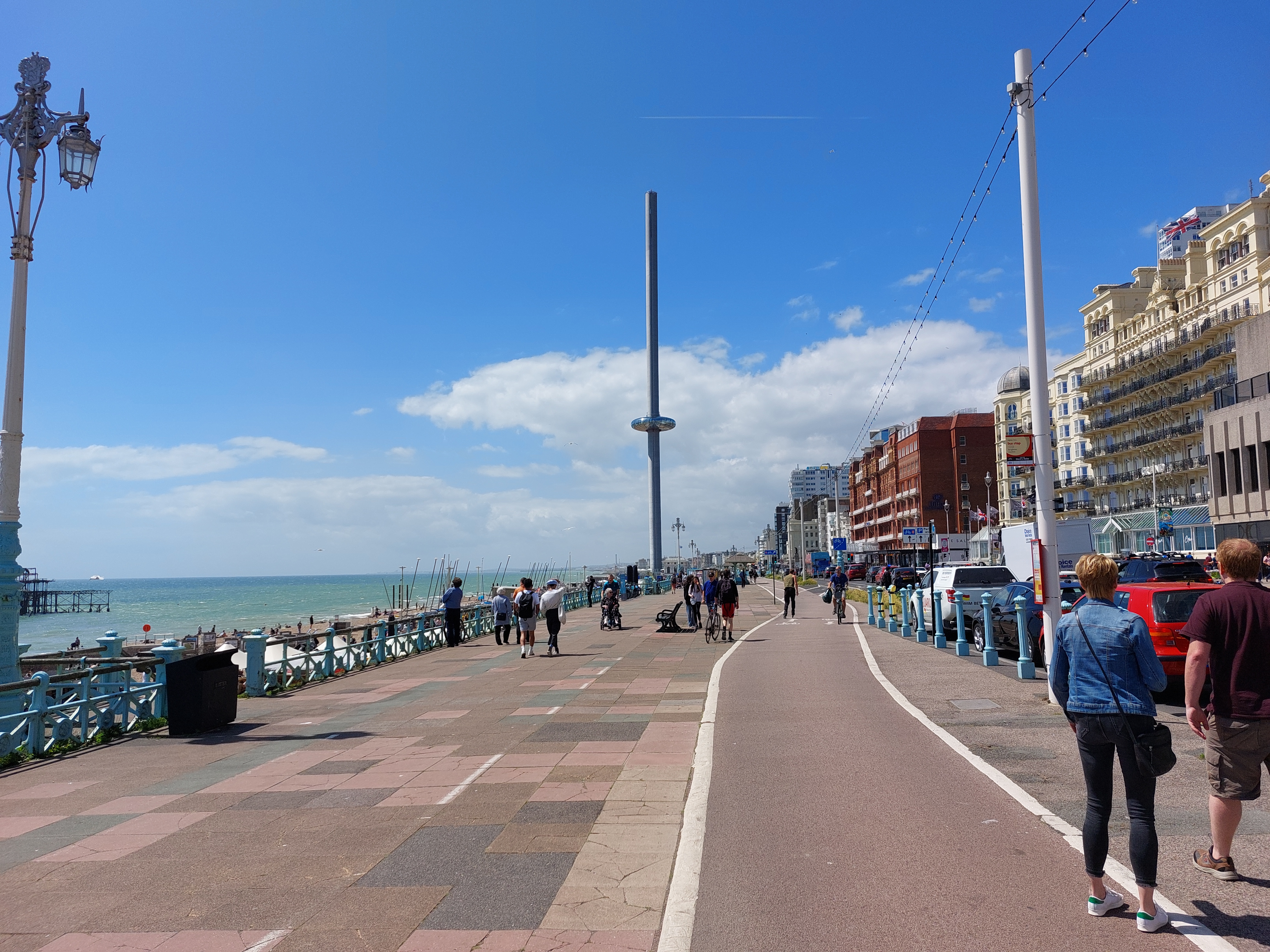 For a brief time, maybe a couple of miles, I tried to go along the beach path because it looked like this...very pretty and scenic. Unfortunately the unblocked wind was just too much. I turned right, headed inland a couple miles, and stayed off the coast the rest of the day. 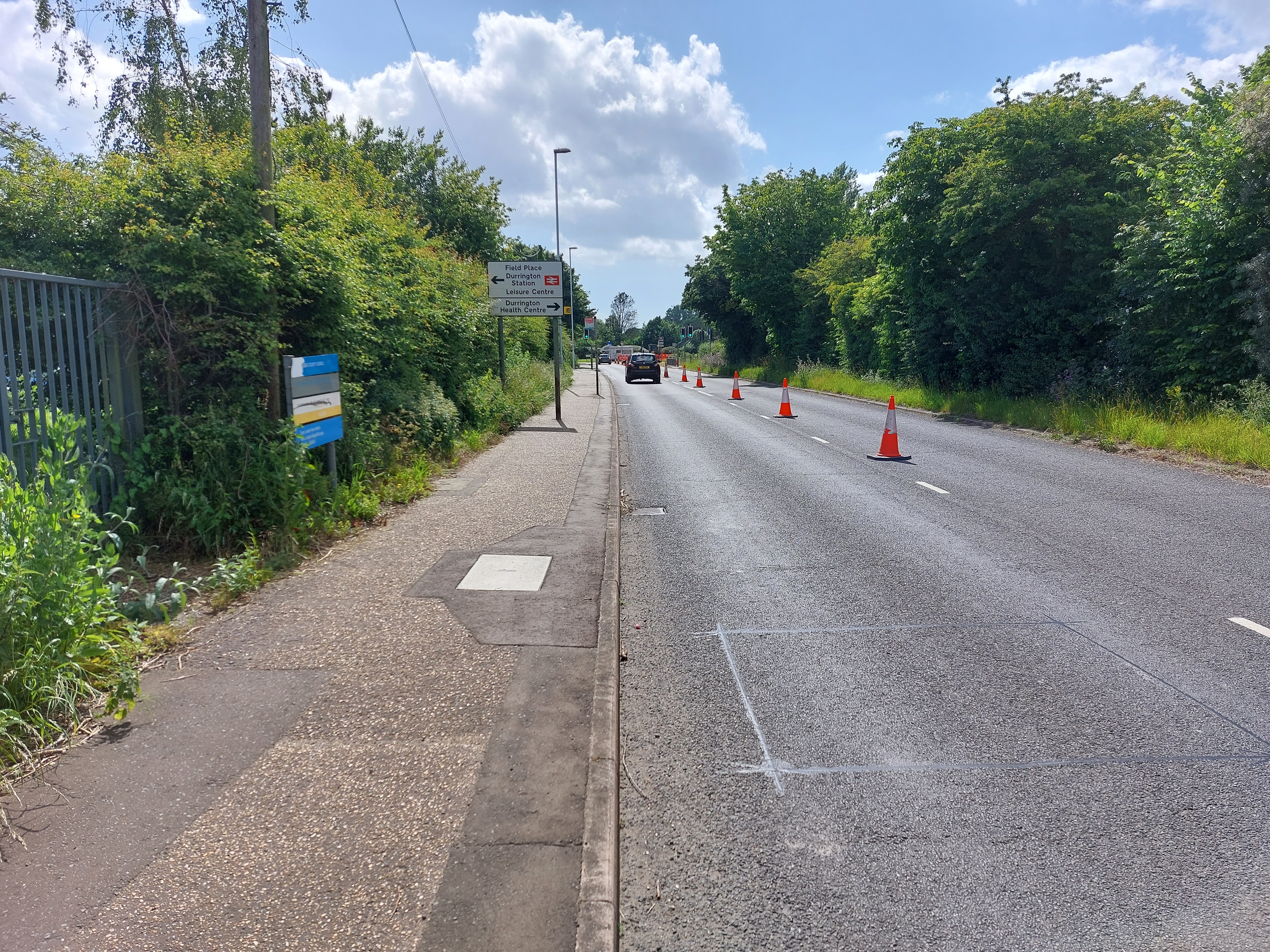 Unfortunately this was not without its dangers. When I got to this innocuous looking spot, as I rode along on the street (that was not a cycle path to the left) a guy towing a trailer went past me and swung left too soon. Suddenly I had a wall of metal just off my right ear. I hit my brakes but he bumped me anyway and sent the bike into the curb. Somehow I caught my balance and put my foot down to steady myself as I fought to stop before falling over, because if I had, the person behind me might’ve run me over. Somehow remaining standing, I stood there gasping with relief and trying to calm my racing heart. The vehicle behind me stopped to make sure I was okay because they’d seen the collision, but I felt fine and a quick check showed the bike hadn’t been damaged (rather a miracle, actually). So I waved thanks and goodbye and once the traffic passed I resumed riding, realizing this was probably the closest to disaster I’ve ever come on any of these trips. I mean, I actually got hit by a car! I don’t think that’s ever happened before. But here I am, still going...and it made a good motivator for the rest of the long, grueling day fighting that incessant headwind. I figure I can survive getting hit, I can survive the wind, right? 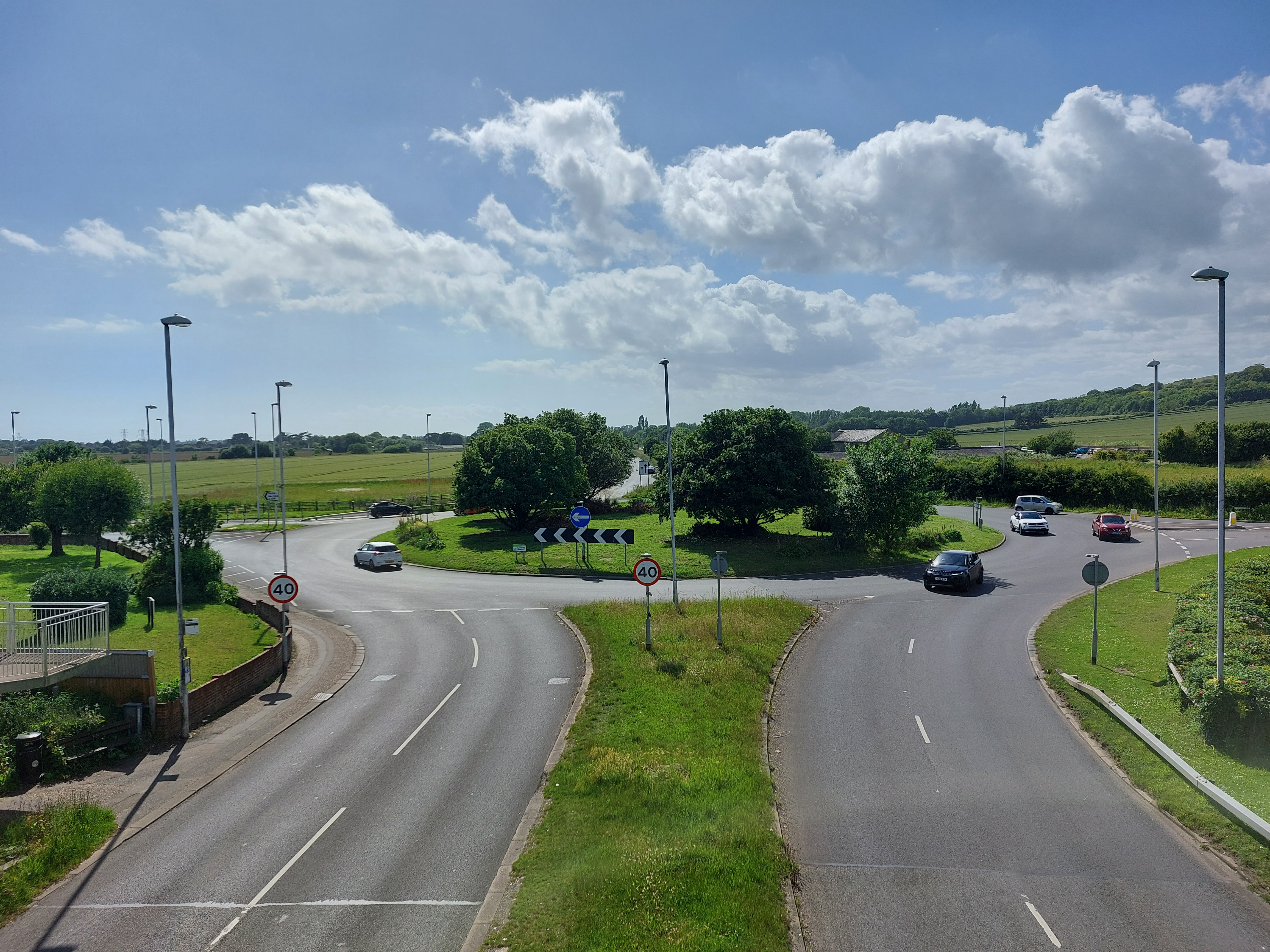 That little incident also reminded me to use bike paths and stay off streets as much as possible, so I did. Unfortunately some of the time that meant crossing over from one side of the road to the other if the cycleway demanded it. In this case it put me on a pedestrian overpass, since there was only one trail continuing forward. Oh well, at least I got a nice picture out of it. This is a typical British roundabout, by the way. 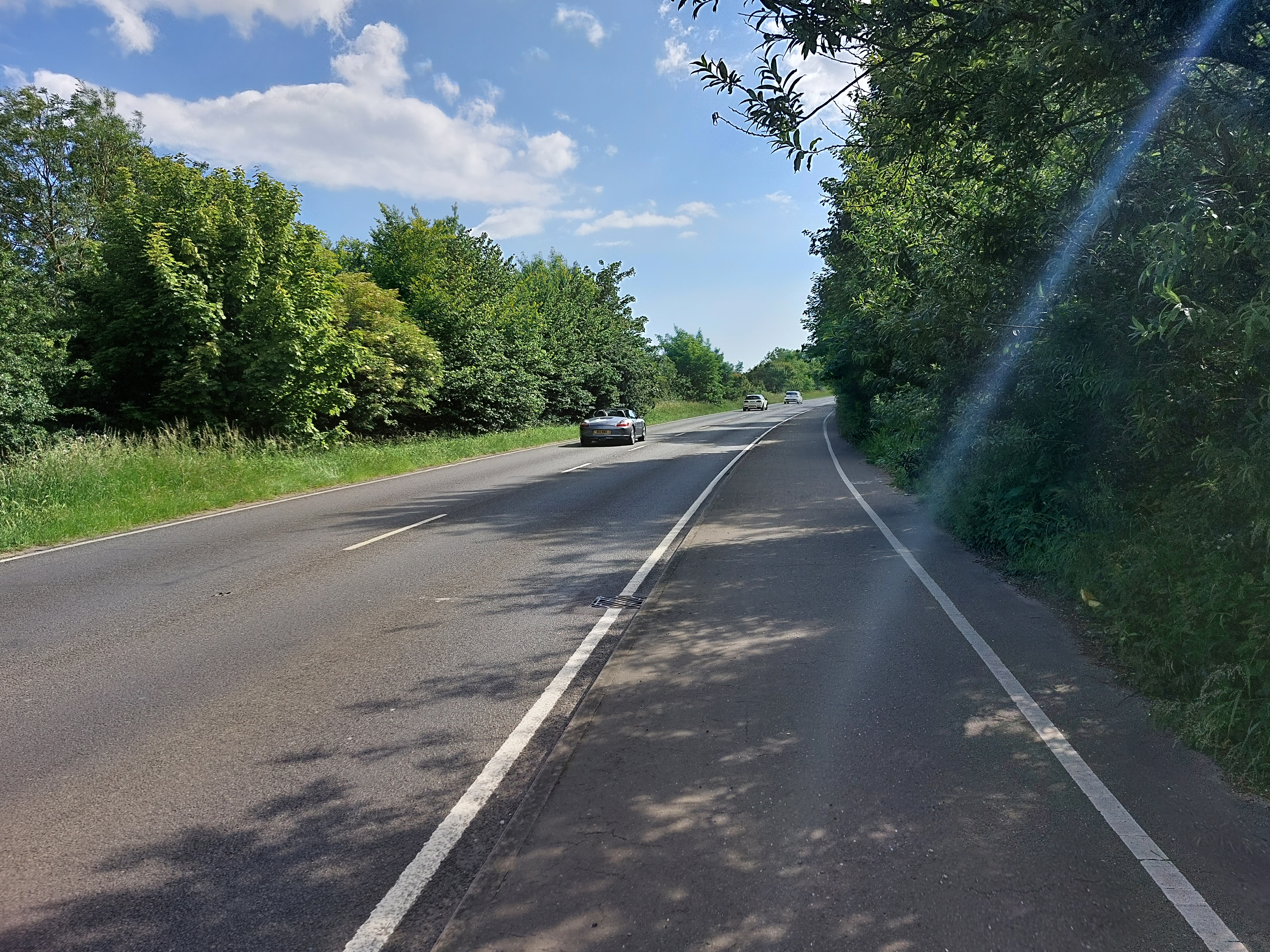 As you can see, sometimes those bike paths are on the wrong side of the road. Come on guys, I just got used to riding on the left! 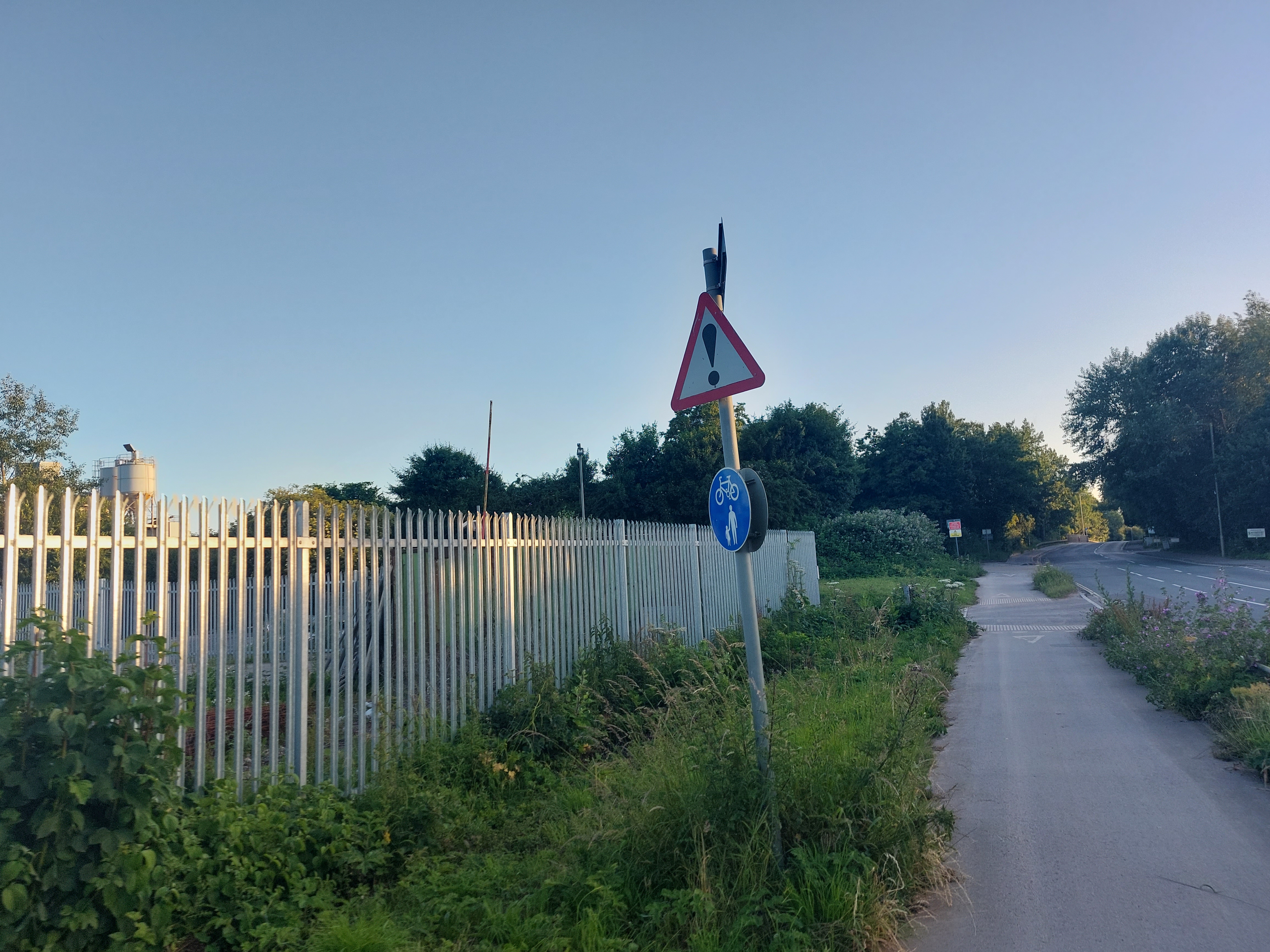 Sometimes it’s hard to tell whether a paved sidewalk is actually a bike path. Luckily, they usually put up these blue signs to let you know. A few times I was at an intersection trying to figure out if there was a path or not, and could spot this sign off in the distance to help me out. 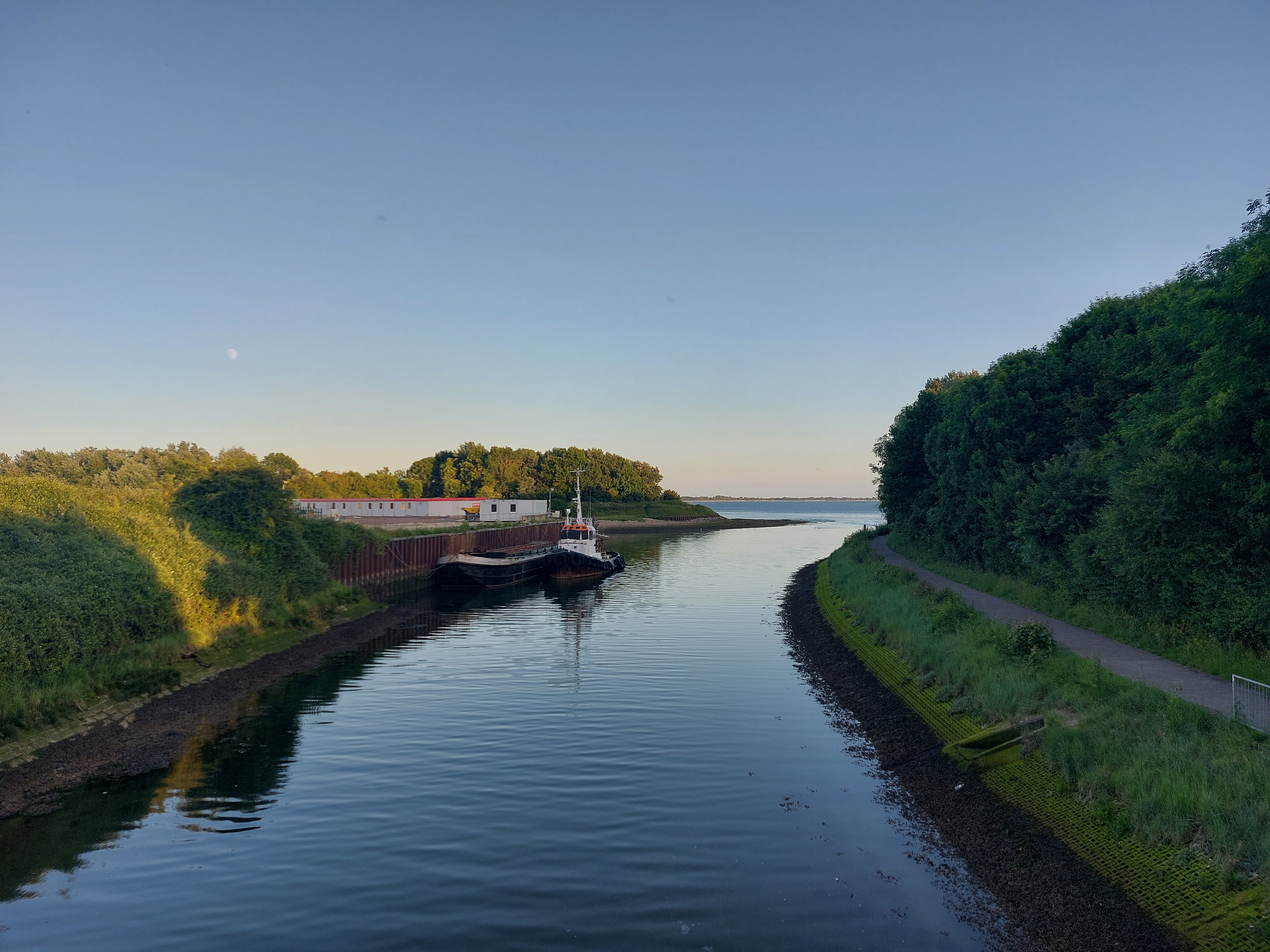 Near the end of the day as the sun grew low I finally got close to my destination, and got this nice picture of the coast just before the finish. 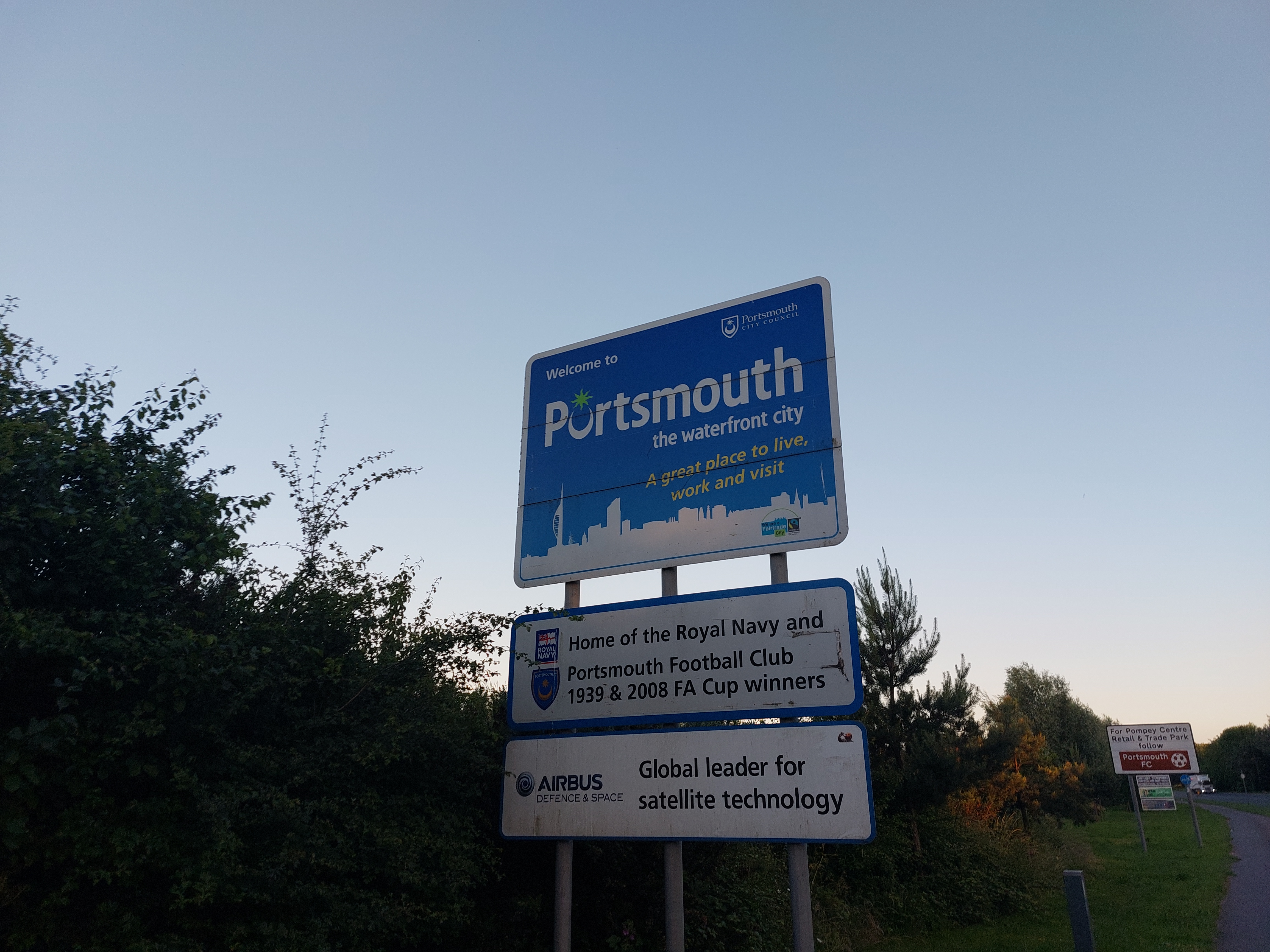 At last, Portsmouth! It only took 14 hours (almost double the time suggested by Google Maps) but I made it. Now to find that hotel and drag myself into bed for some much needed rest.