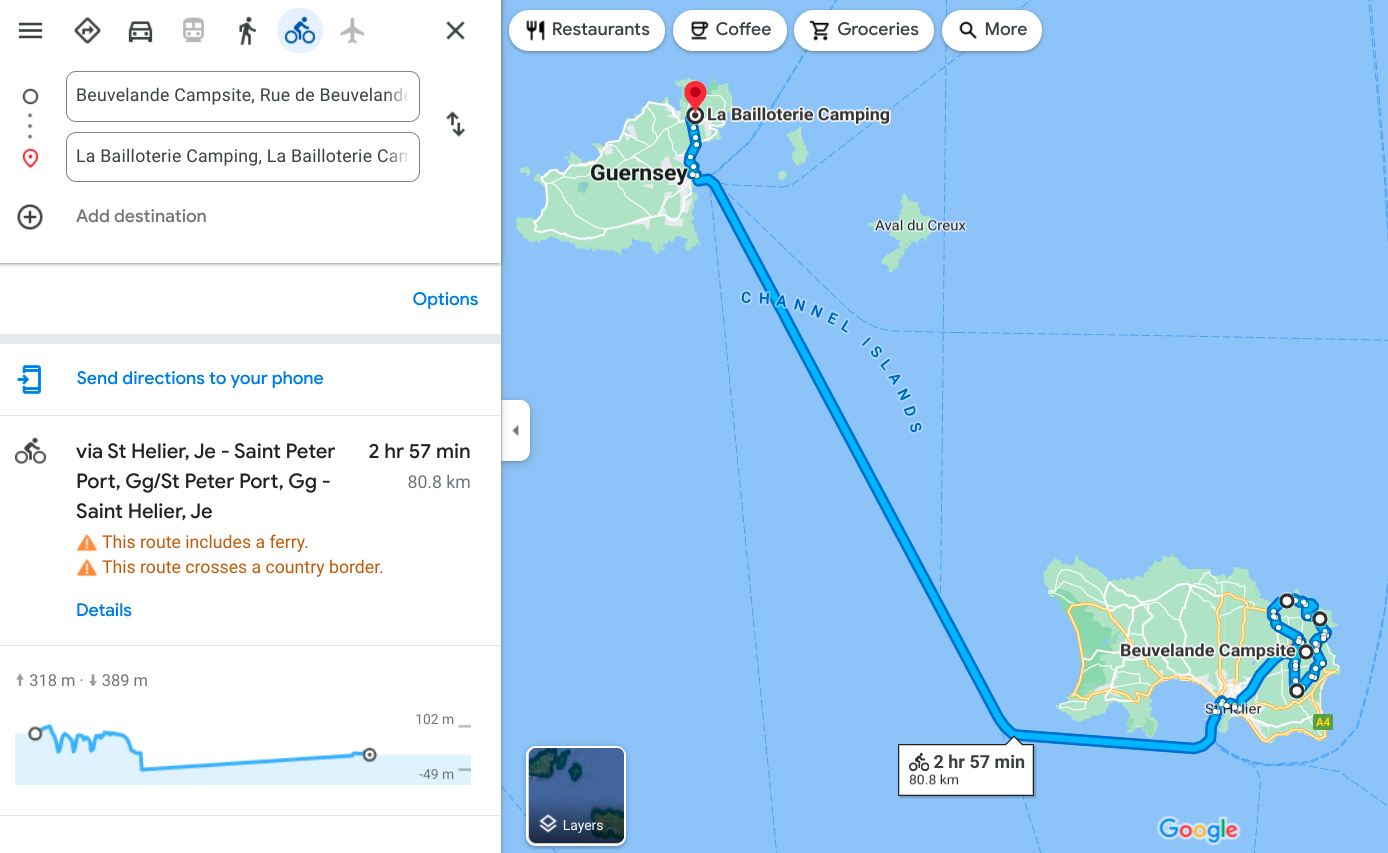 Today I had only one specific thing to do, namely be on the 7pm ferry to Guernsey. I wanted to be there 45 minutes early and the bike ride to town would take at least a half an hour, so that meant getting back to the campground about 4:30pm to break camp, grab a shower, and head down there. The rest of the day was mine to explore the island and do some geocaching.

Still not quite recovered from the long marathon on Day 3, and not yet used to sleeping in a tent, I got up slowly and spent some of the morning updating this blog (since I finally had decent wifi and time to use it). Then it was off to get some lunch, and finally get the touring started around 11. I meandered around the northeast side of the island as you see on the map here, although the route was actually quite a bit more convoluted than this, mostly focusing on caches and not straying so far that I might wind up being late for the boat.

Most of this trip so far has involved very long, steady, grueling climbs that seem to go on forever. The climbing today, while close to 1000 feet in total gain, was all much shorter hills that didn’t last too long. That, plus the fact that I didn’t have all the gear on the bike, made it much more bearable. Plus I’m starting to think that the backpack is part of the problem with my lower back pain, so I’m going to try to work out a solution to deal with that later. But today it wasn’t much of a factor as it had only some emergency bike tools in it.

Ultimately I did make it back to camp on time and got everything packed up and ready to go before grabbing a much needed shower. The ride back to the boat was almost all downhill, but on crowded roads, so I kept blocking a lot of cars along the way. The ferry was the same one as yesterday, just now I’m on the leg that starts back toward Portsmouth, stopping in Guernsey. I got aboard, ate the second round of sandwiches from the lunch buy, and settled into enjoy a movie while taking the 2 hour ride to my next destination.

I arrived at 9pm, which is not quite sunset this time of year, and hopped on the road to hurry off to the campground, a journey of about 20 minutes. Once arriving I hastily set up the tent and managed to get everything done before it got too dark. After a brief tour of the campground and some time on the wifi, I headed to bed and slept with my typical poorness.

Now on to the pictures...not too many today as the Guernsey arrival photos were almost the same as the ones I showed you yesterday so I won’t duplicate them. 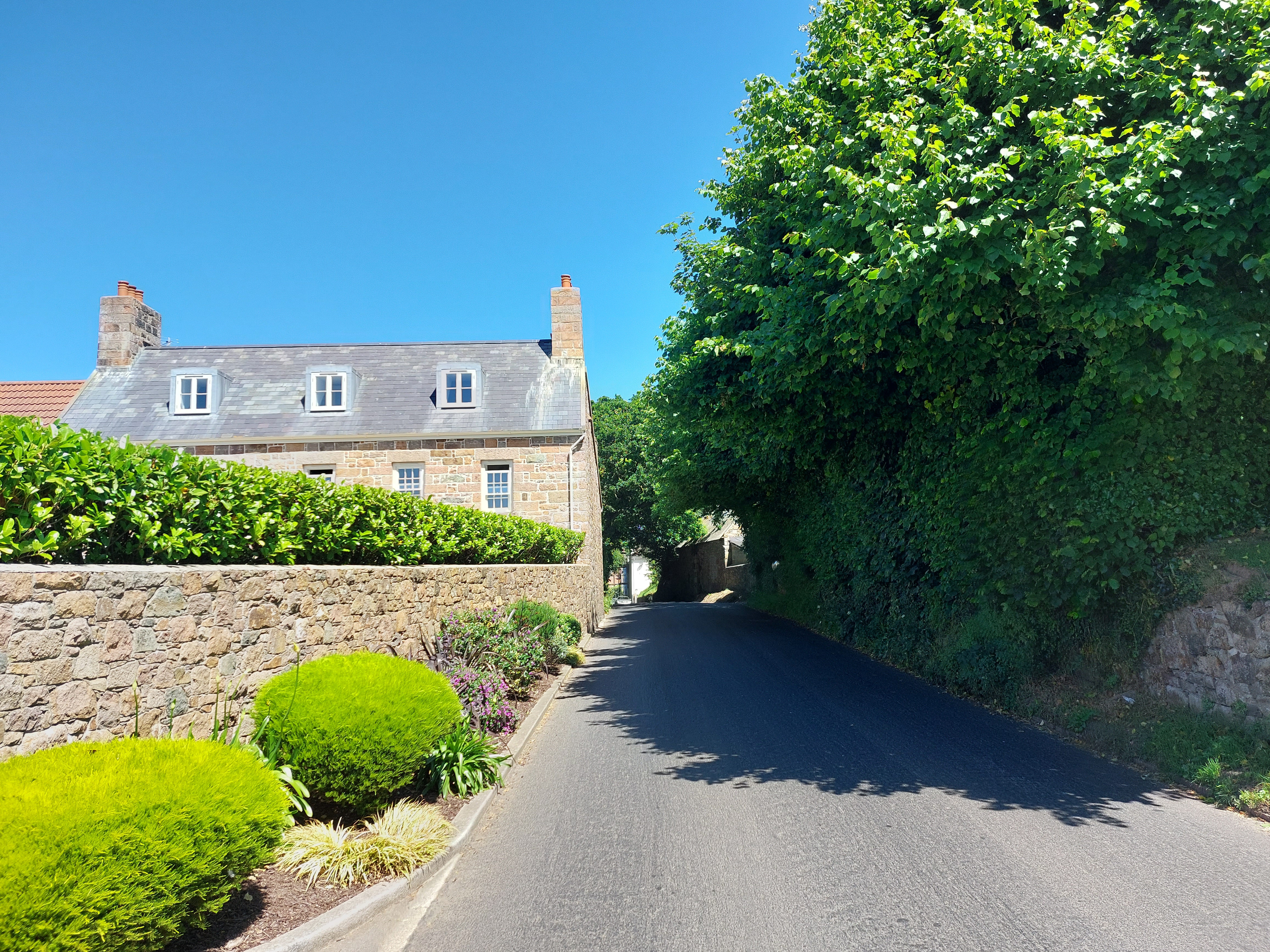 Riding around Jersey took me to lots of small villages similar to this. It’s quite a beautiful island. 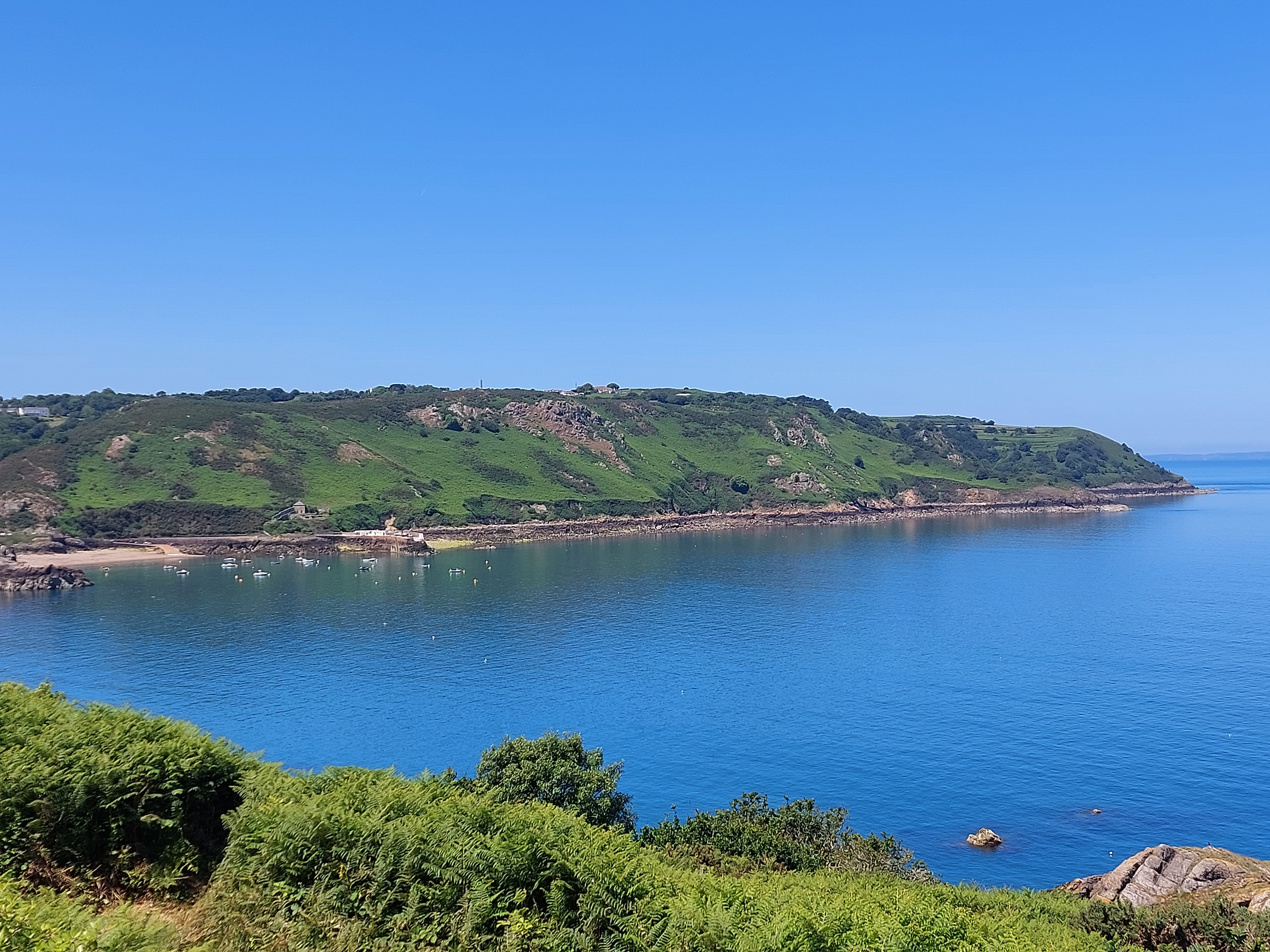 Here’s the first of several views along the north coast. 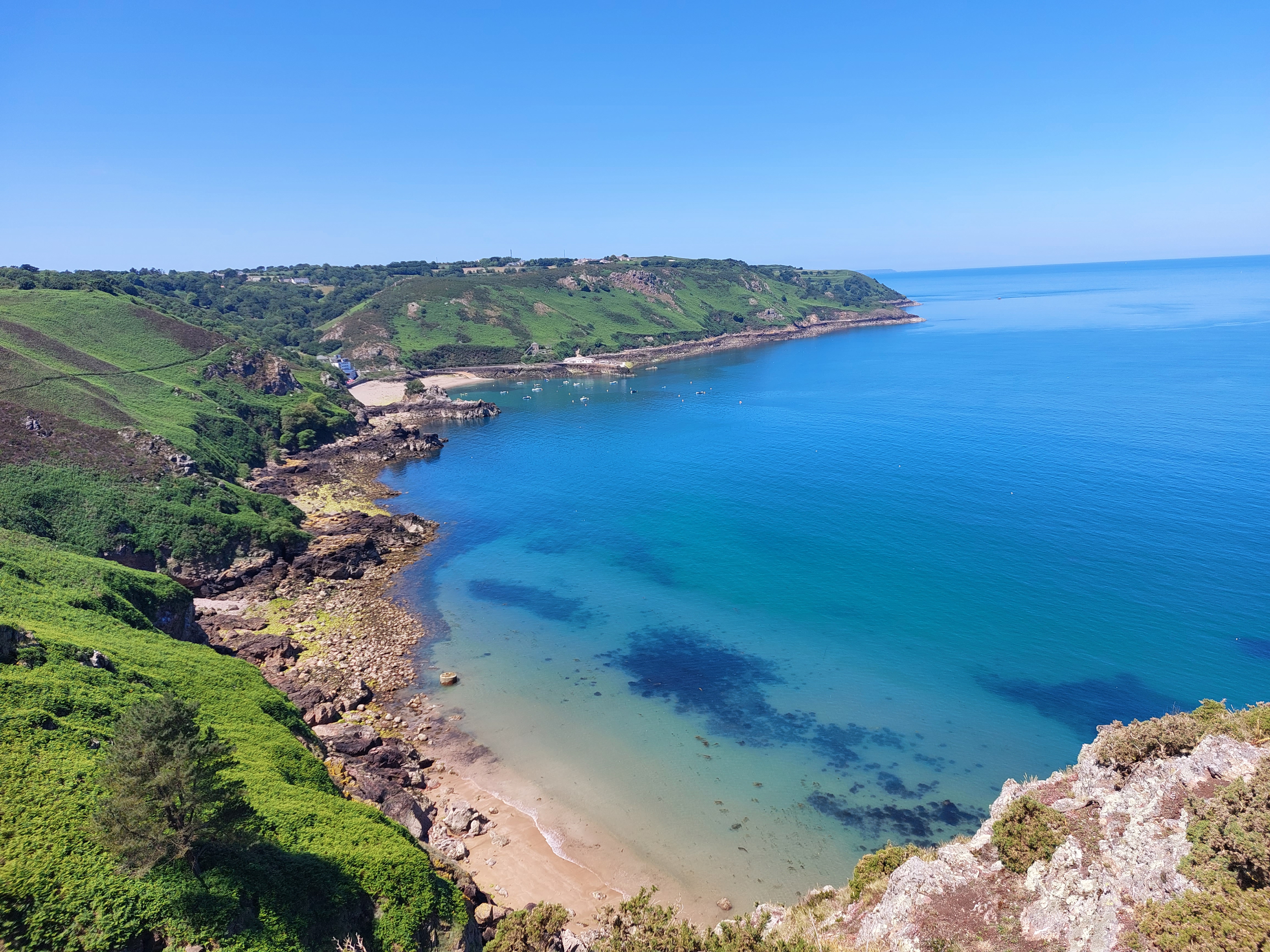 Another view of the same basic area, but from up on top of a high hill I had to climb while searching for a geocache. 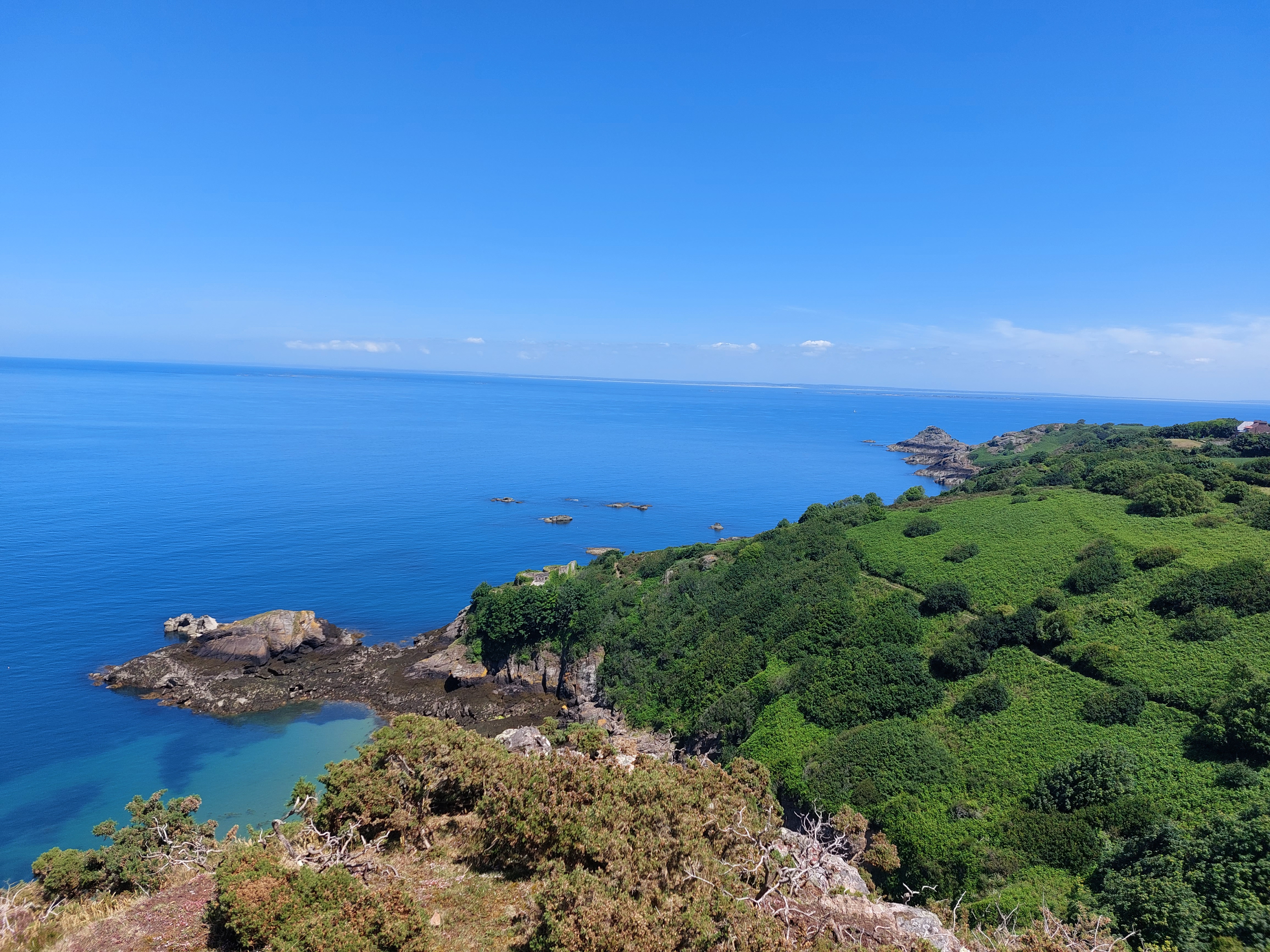 Looking off to the right from the same spot. 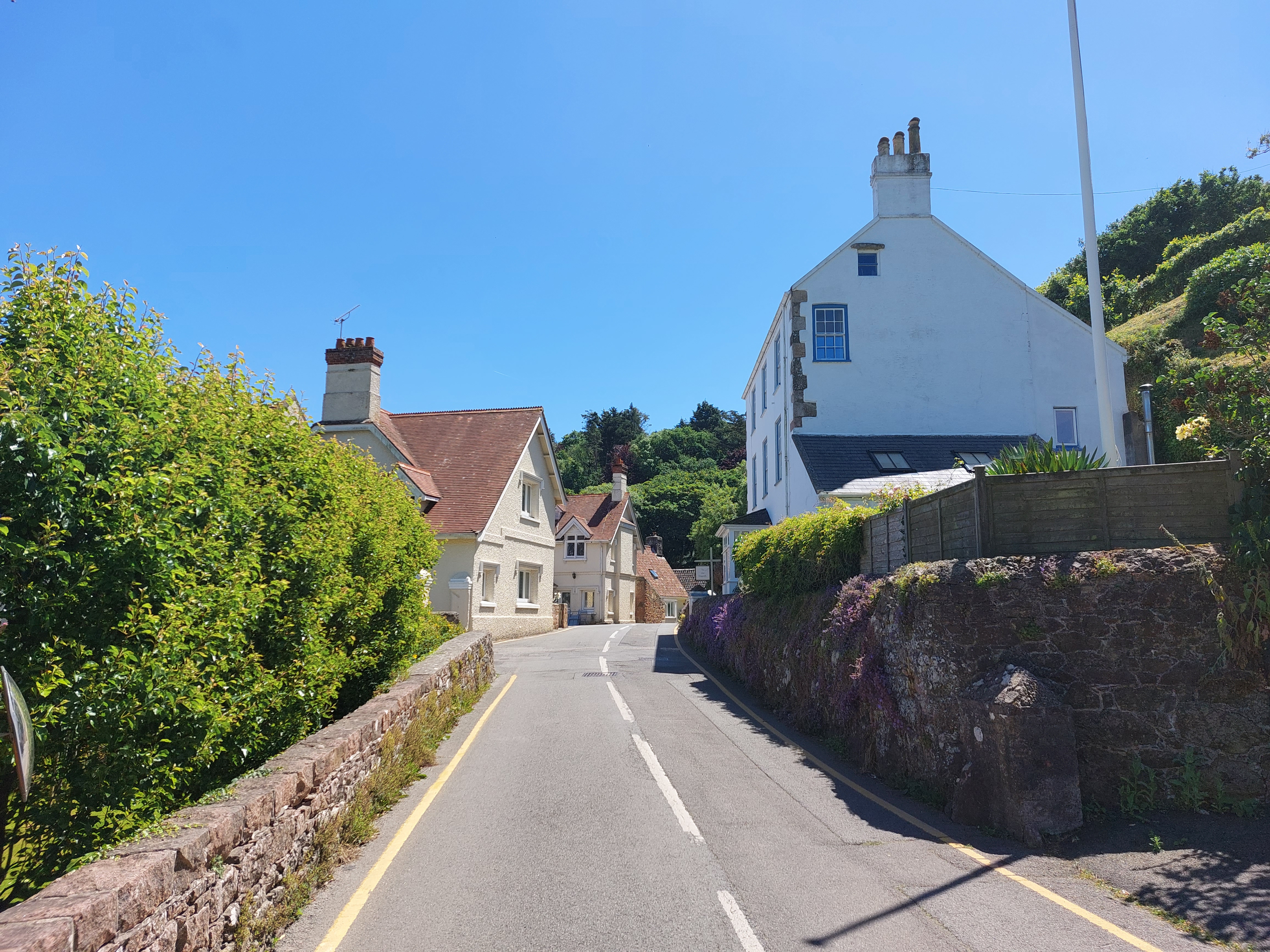 Another one of these amazingly gorgeous little villages. 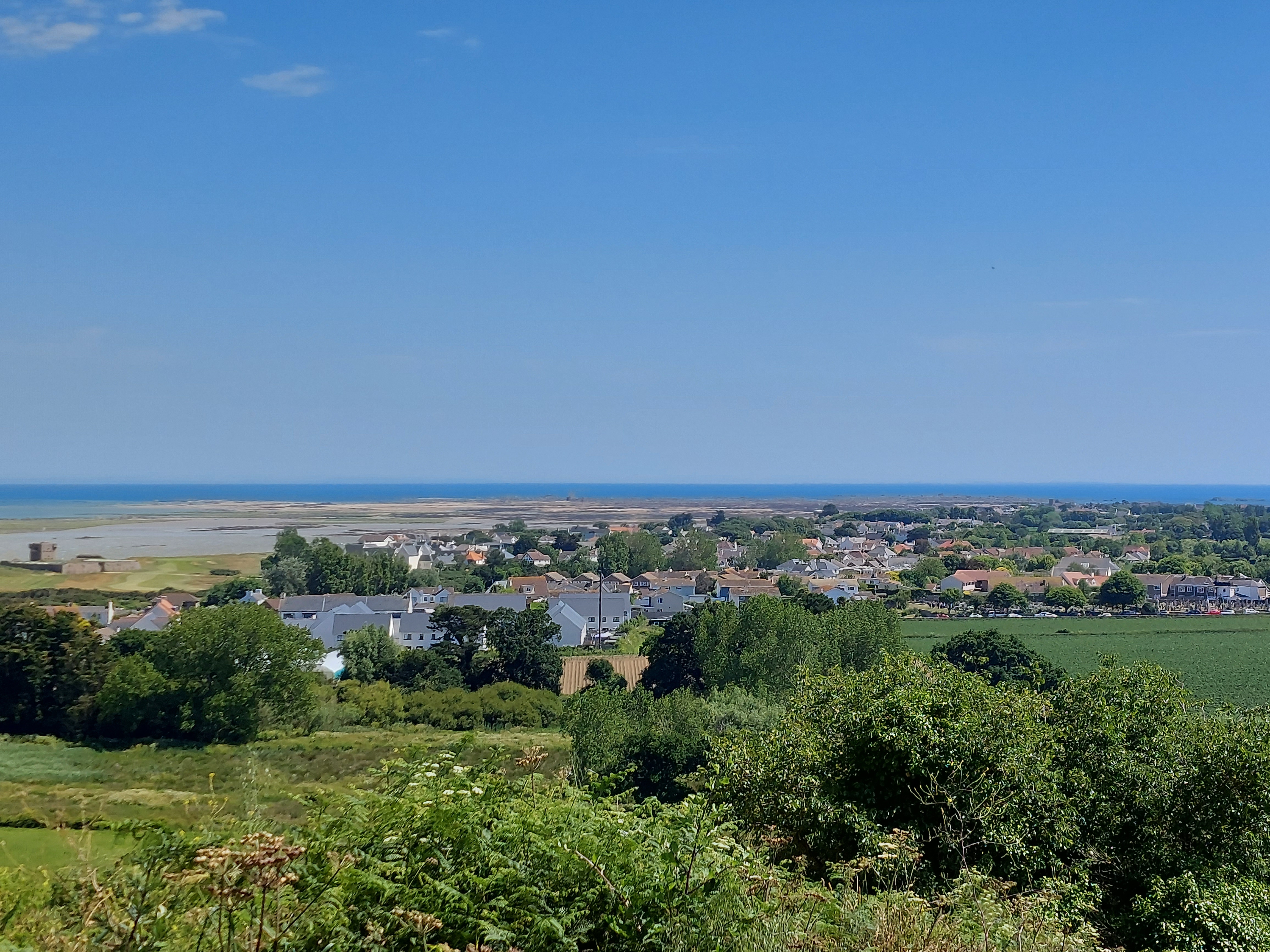 Here’s a view of the main town from up on one of the hills. Notice the fort to the left. Also, the tidal flats are visible so it’s near low tide. I read somewhere that this island has tidal surges so great that sometimes the island almost doubles its land mass at low tide. 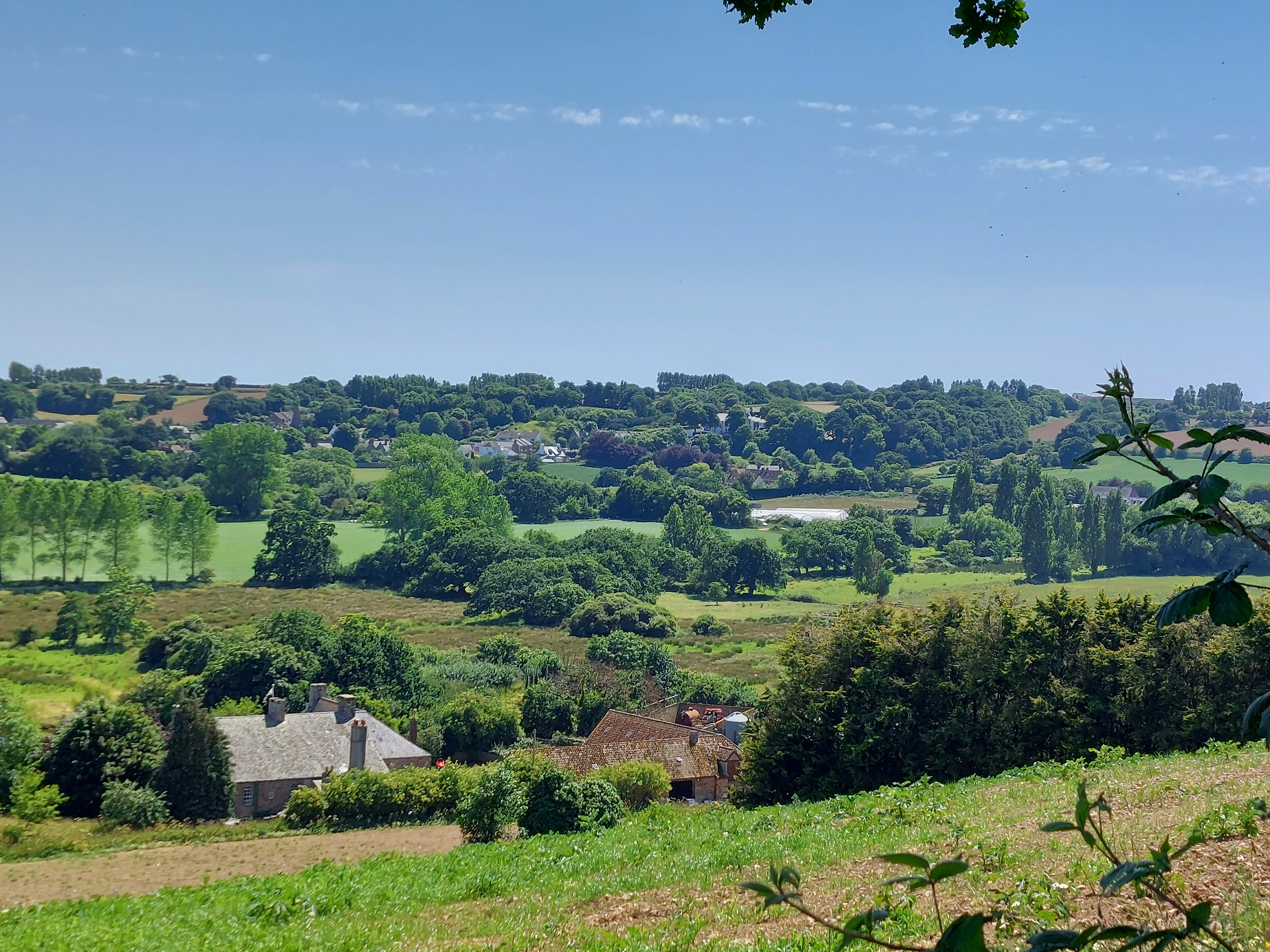 Another picturesque view from one of the hills. 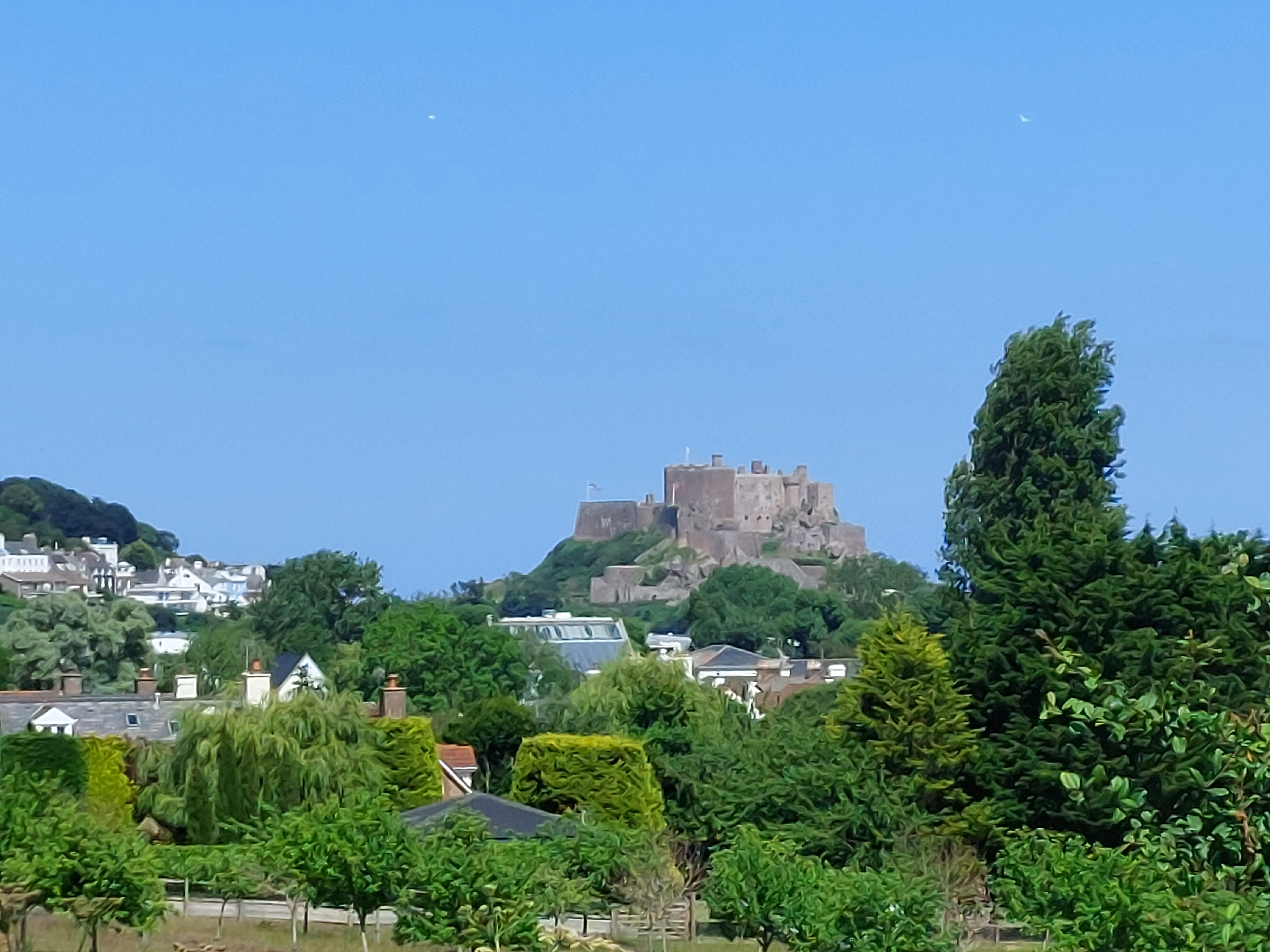 Here’s another view of that castle I mentioned before. I didn’t get much closer than this, unfortunately, as I was worried about time at this point.

Along the way back to the campground I stopped for one last geocache at this place, which apparently was a building left over from World War II. The Germans captured and occupied the Channel Islands during the war and then set about fortifying them, and to do that they build stone crushing facilities that needed power...and this was one of their power stations. Ultimately the islands proved strategically worthless as the D-Day invasion just went around them. 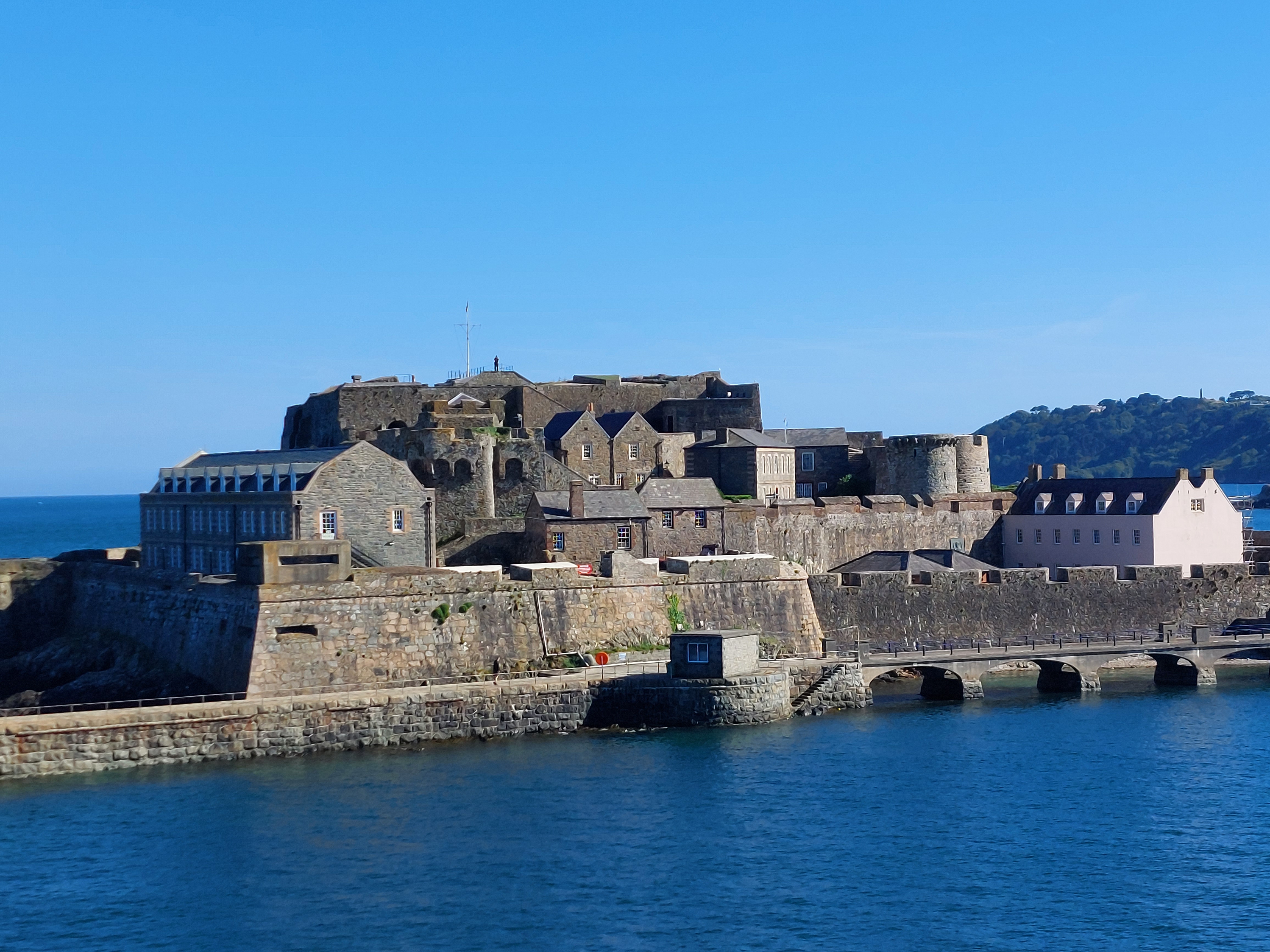 I posted a photo of this fort yesterday, but here’s a better view in better light. 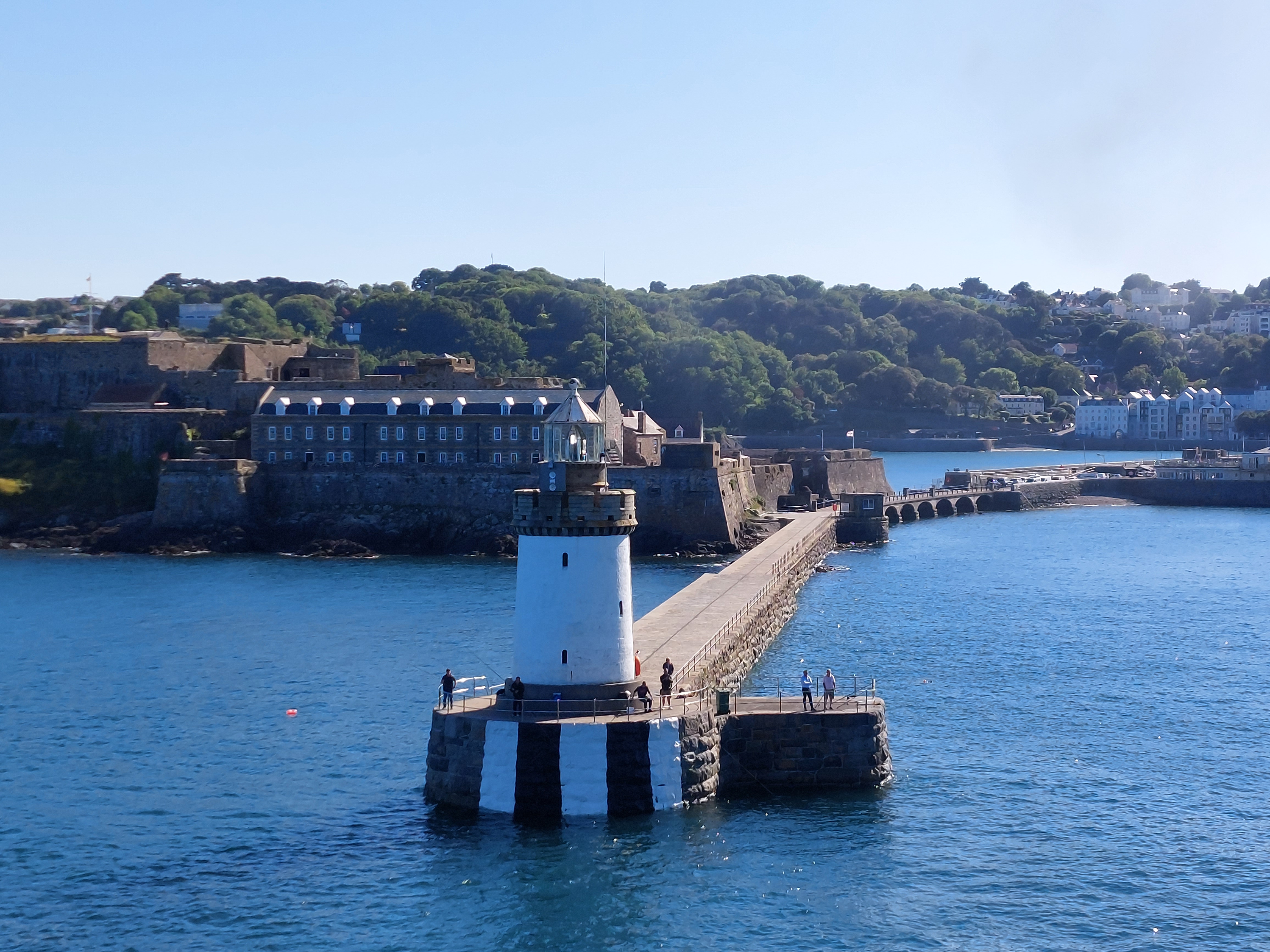 And here’s that lighthouse again...I’ll see if I can visit it more directly.

After I got off the boat, I took one last picture of sundown over the harbor on Guernsey. From here it was a hasty ride through flat terrain to the campsite, and then off to bed. Another day of touring awaits me tomorrow...