Today I stayed on Guernsey again, and the main focus of the day was a 5-hour day trip to Sark, one of the neighboring islands and part of the same territory as Guernsey is (basically an independent country for the most part, but a part of the overall British commonwealth). Guernsey has its own currency, for example, although they take pounds sterling just about everywhere...they just give you change in their own money (something I found out the hard way...guess I have to spend the rest of these Guernsey bills tomorrow).

Anyway, the trip to Sark had been pre-purchased during the scheduling part of this trip (see the home page for a reminder) and because of the various issues with timing, I had to make it a day trip, not an overnight stay. I probably could’ve done it, but I would’ve had to pull up all the camping stuff and relocate, then go back the following day and do the same thing again. Just too much of a headache. Turns out that was a great decision, because the ferry to Sark does not take bicycles, and if I’d shown up there with a bike laden with luggage I would’ve been in big trouble.

Of course I found out about the bike thing just as I was about to board the ferry, and had to hurry to lock it nearby and jump on the boat before it left me behind (I made it by about 30 seconds). Then I spent the ride over fretting about having to rent a bike (it’s called “hiring a bike” here, though) but it turns out I needn’t have worried. The cost was only 7.5 pounds and they gave me a Trek mountain bike (I’m riding a Trek touring bike normally) so it wasn’t all that big of a change. The only real issue was bike shoes I was wearing, which have those cleats in the bottom. They did not like staying on the standard pedals I was forced into using. Luckily the hills on Sark were not that steep, or at least the ones I rode on weren’t. I did have to hike a couple of steep climbs, but that’s a different story. If I’d known about having to rent (sorry...hire) a bike I would’ve brought my tennis shoes.

Anyhow, Sark turned out to be pretty cool to visit. The island allows no cars, and the only motors are the occasional tractor doing farm work or hauling something. Even the fire engines are just water tanks towed by tractors. They use one also to haul people to and from the ferry down this steep slope (that’s what that sudden elevation gain/loss is on the map up above). I took the “shuttle” up, but walked back down. The bike hire place was up in the main town at the end of that climb, and once up there I stayed relatively level, so today had no significant climbing at all.

The ferry sailed to Sark at 10am, and arrived right at 11, whereupon I had until 4pm when it returned to Guernsey. By the time I waited my turn at the shuttle and got a bike, it was already quarter till noon, and then of course I had to be back somewhat early, so I returned actually about quarter after 3, giving me a total of 3 and a half real hours on Sark. I managed to get 18 geocaches and tons of photos in that time, though. After the trip back, once on Guernsey again, you can see by the map that I rode around a bit more on that island before retiring for the night for my second straight evening at La Bailloterie. So now let’s move on to some more photos... 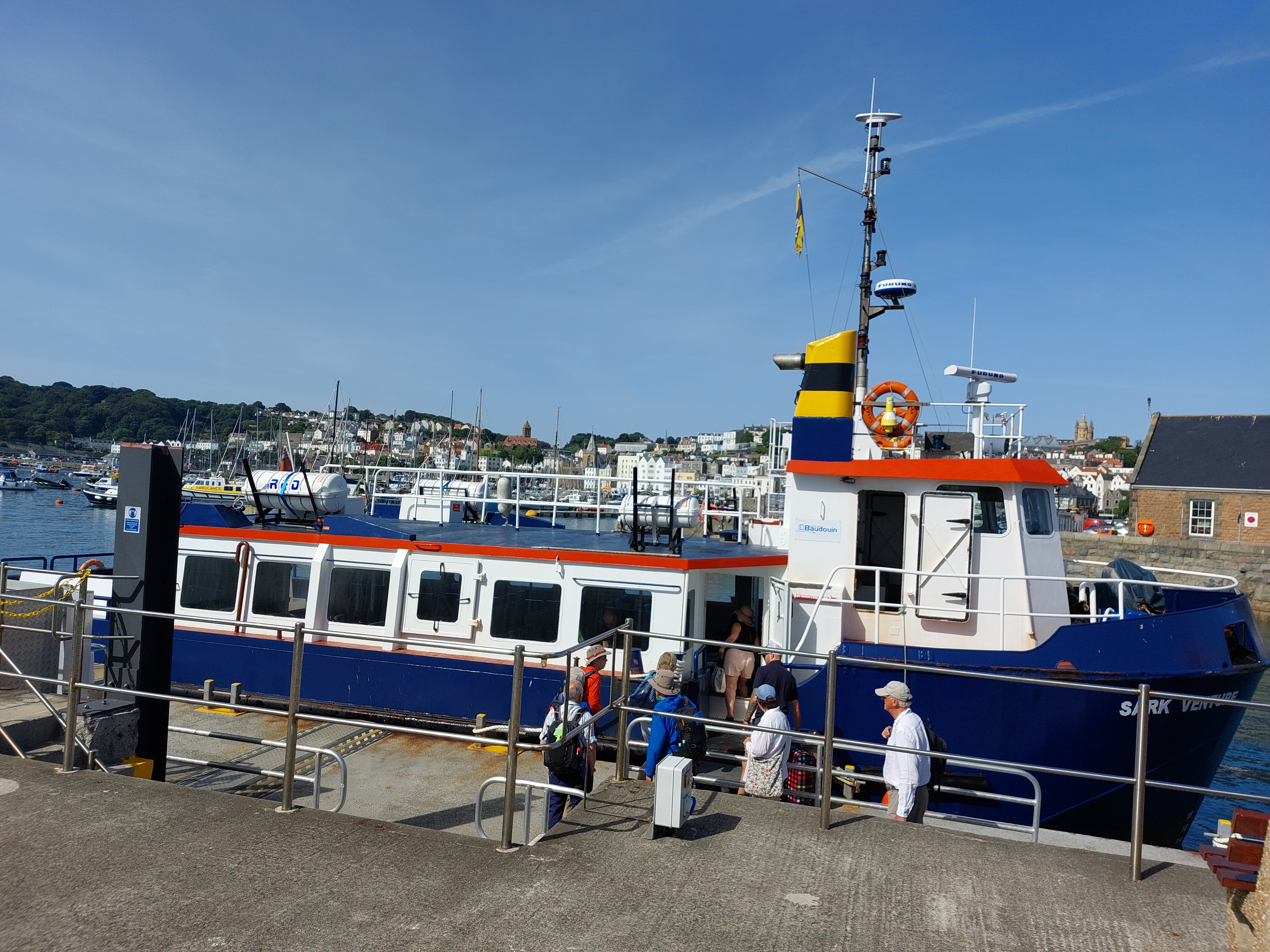 So this was the ferry to Sark...a far cry from the huge liners I’ve been on so far. But then these little guys don’t have to worry about hauling cars and trucks around (or bikes, for that matter). You can get at least a hundred people aboard plus their luggage, though.

As we sail out, we passed a cruise ship visiting for the day (a Princess ship, as it turns out). They weren’t still arriving, they had dropped anchor and were using tenders to ferry people to Guernsey. I guess the channel isn’t very deep here if this is as close as they could get. 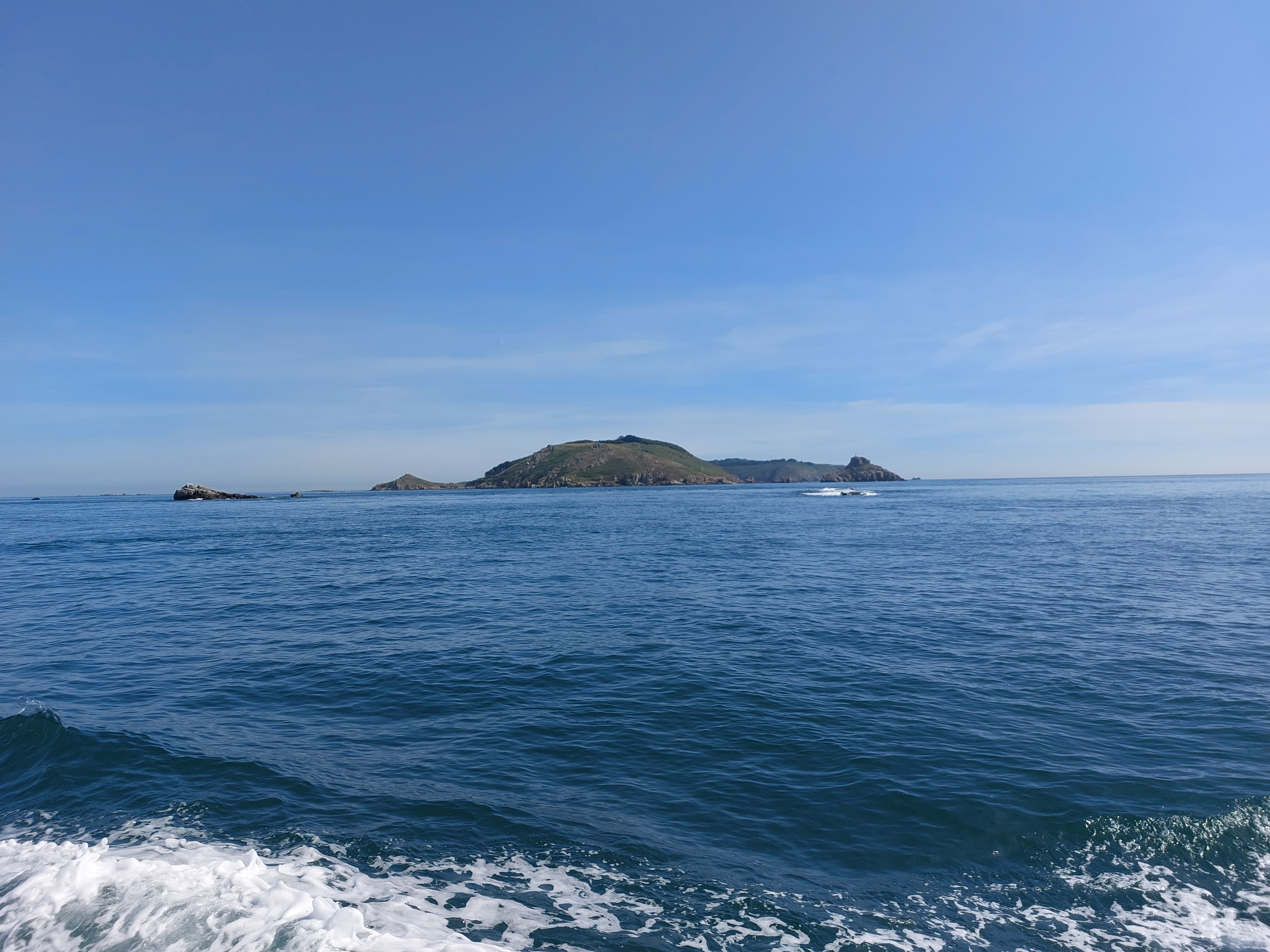 First view of Sark as we swing around the north end and down to the tiny harbor on the east side. Looks pleasant enough. 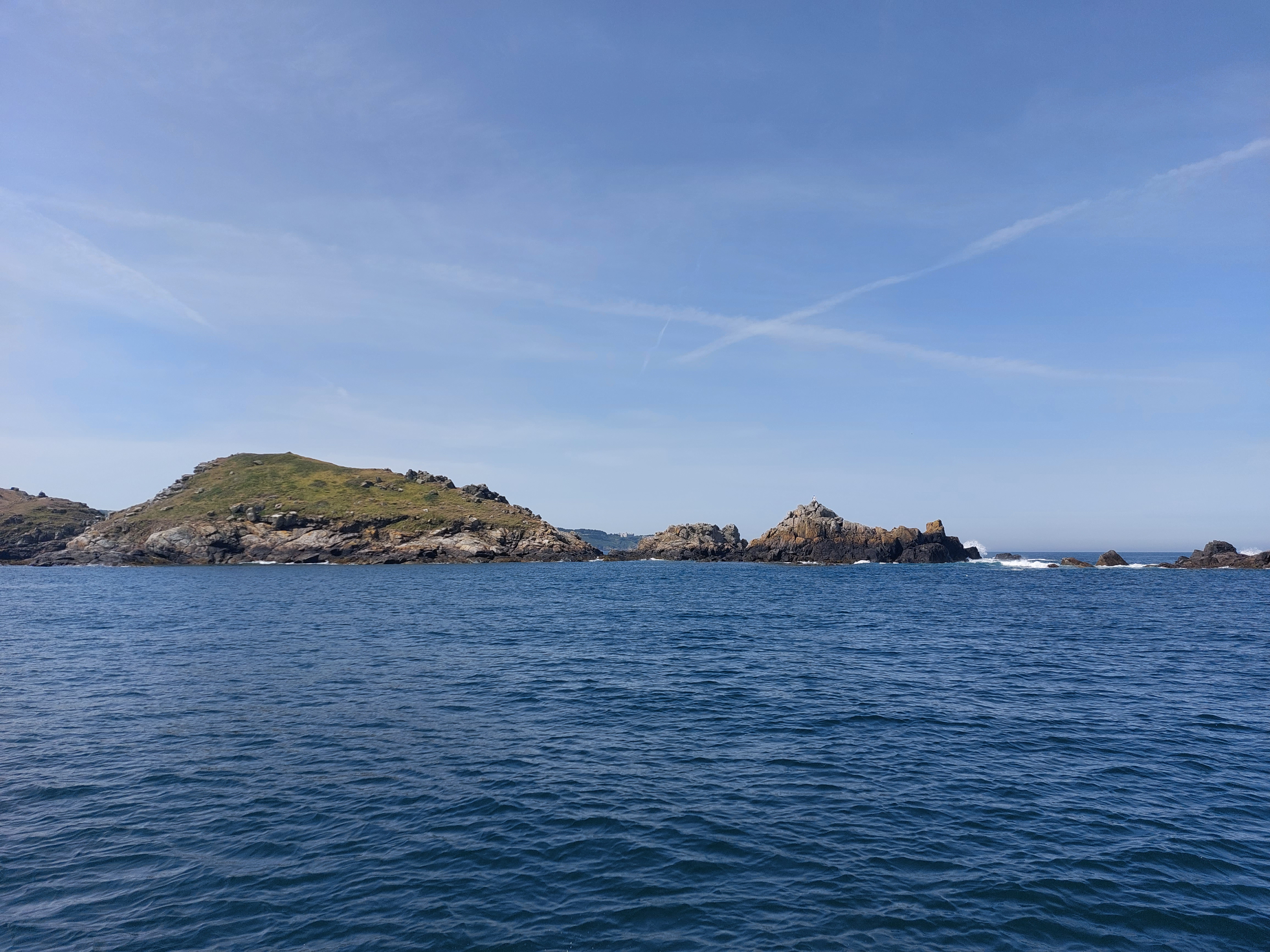 There isn’t much of a shoreline, though. I can see why they would have trouble figuring out where to put a harbor on this island. 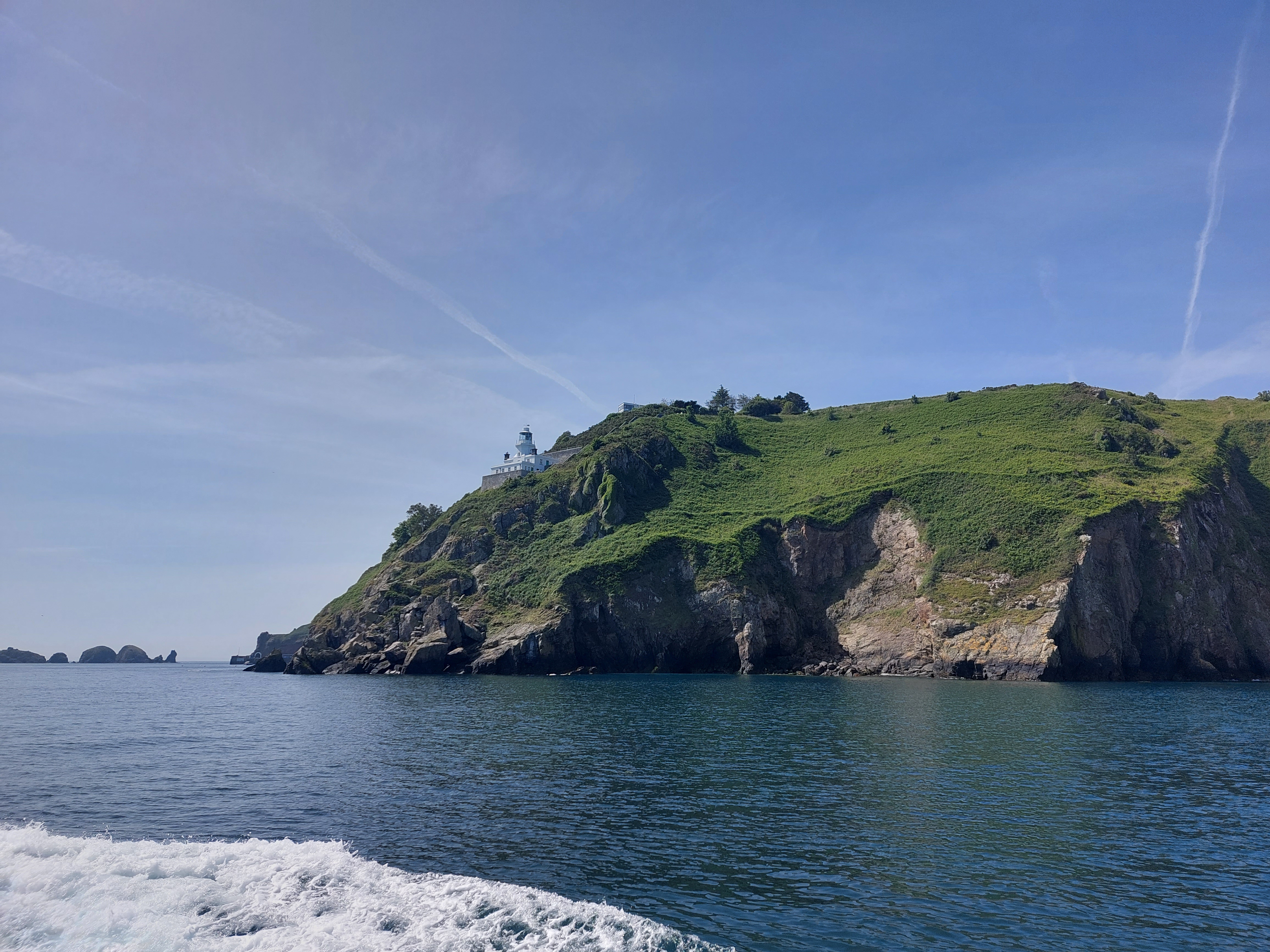 A nice lighthouse came into view as we neared the harbor, which from my position on the boat I couldn’t even see until we got there. It’s built tucked in a cleft in the rocks...there’s a picture of it later on. 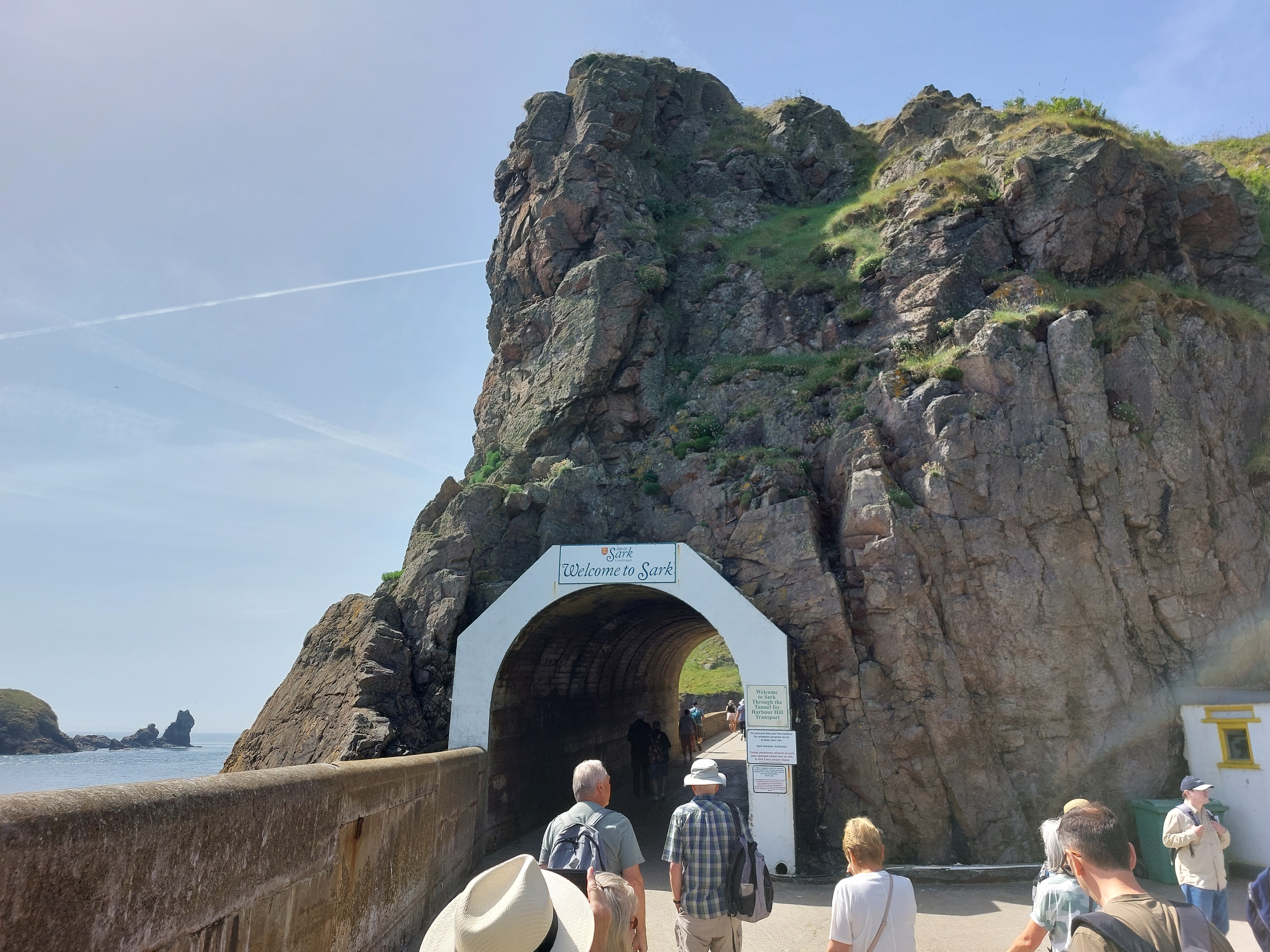 Once you disembark you make your way through the tunnel to the steep road climb (I took the shuttle like most everybody else). 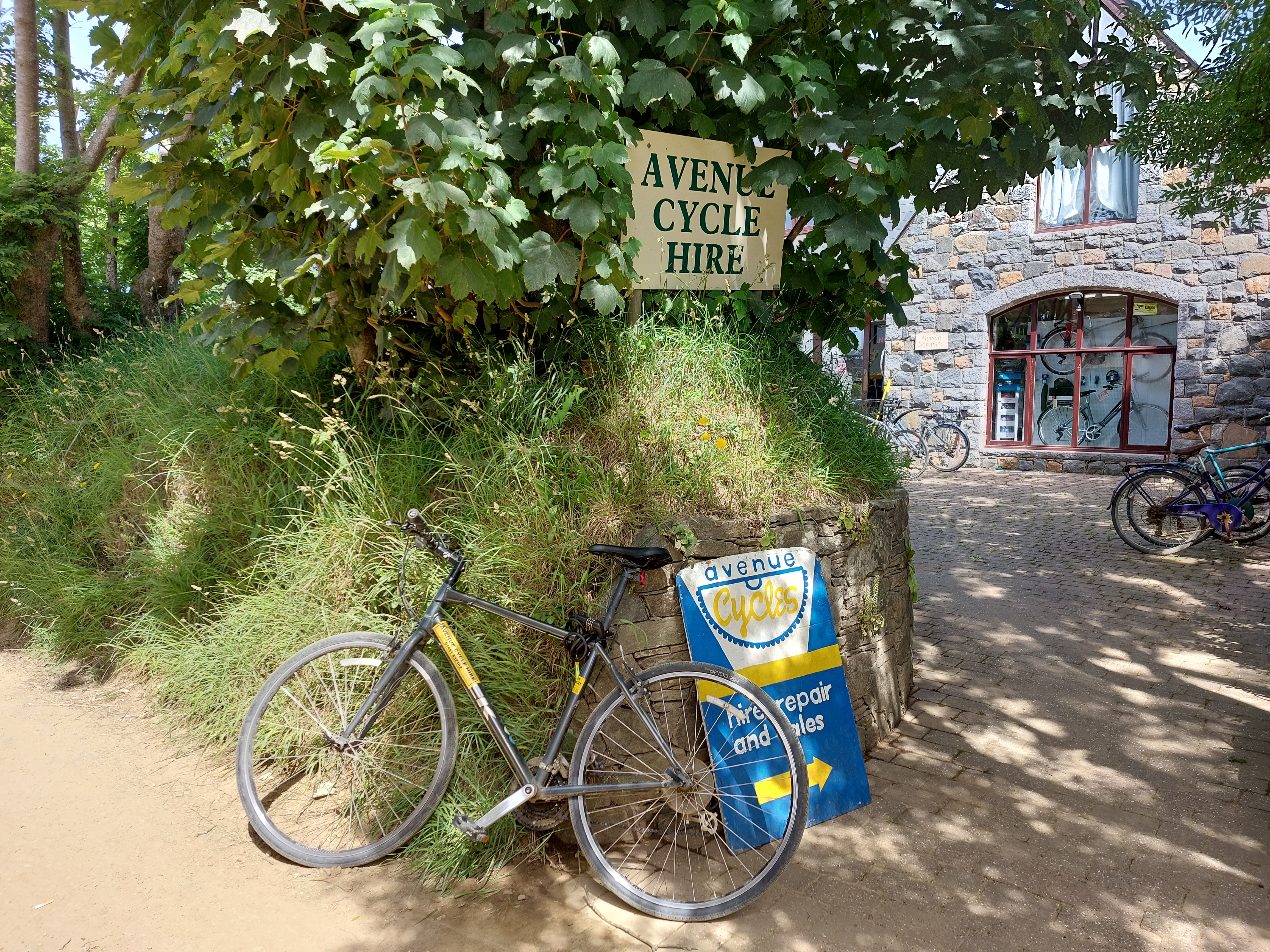 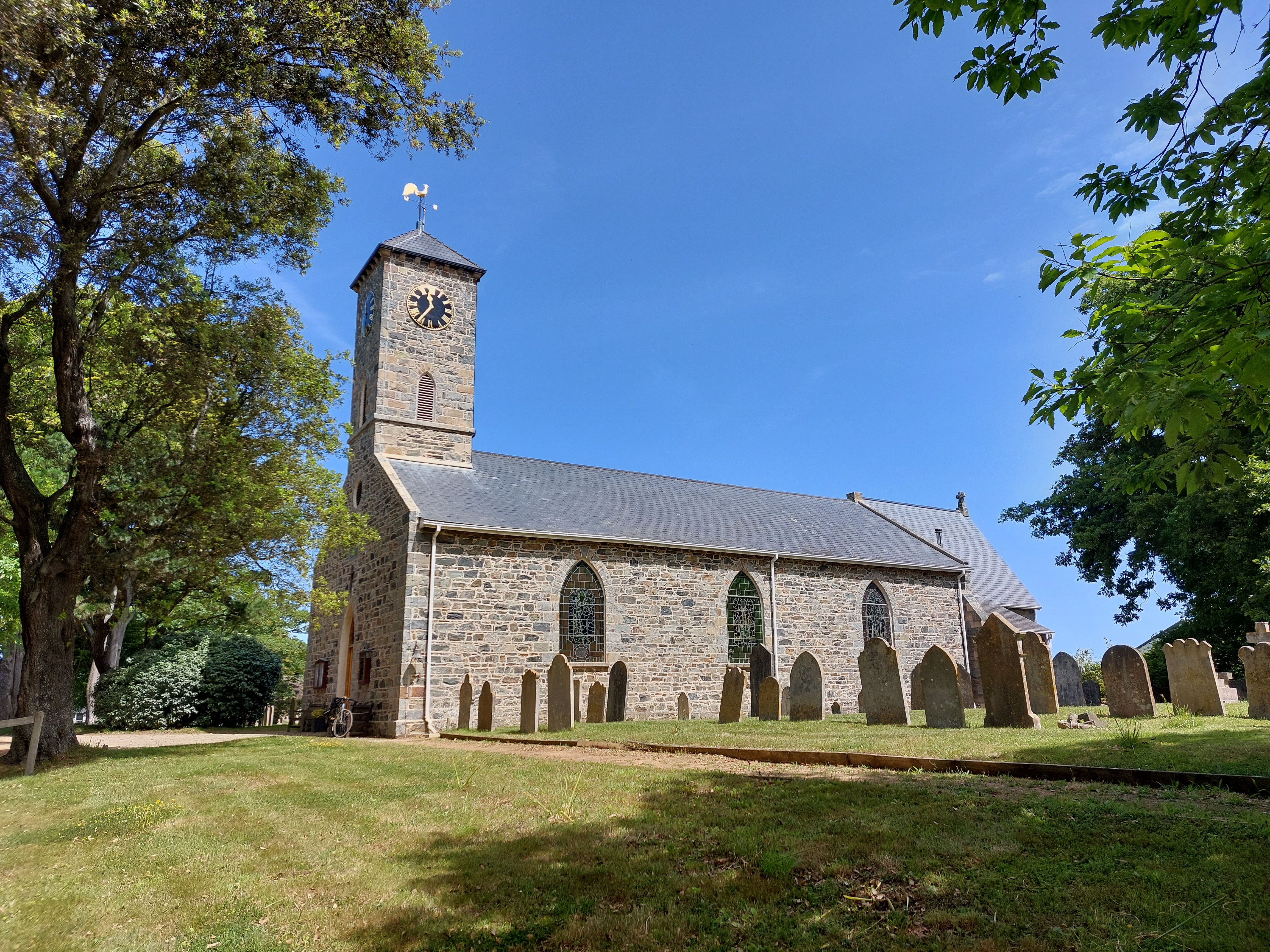 Pretty nice church near the middle of the island. 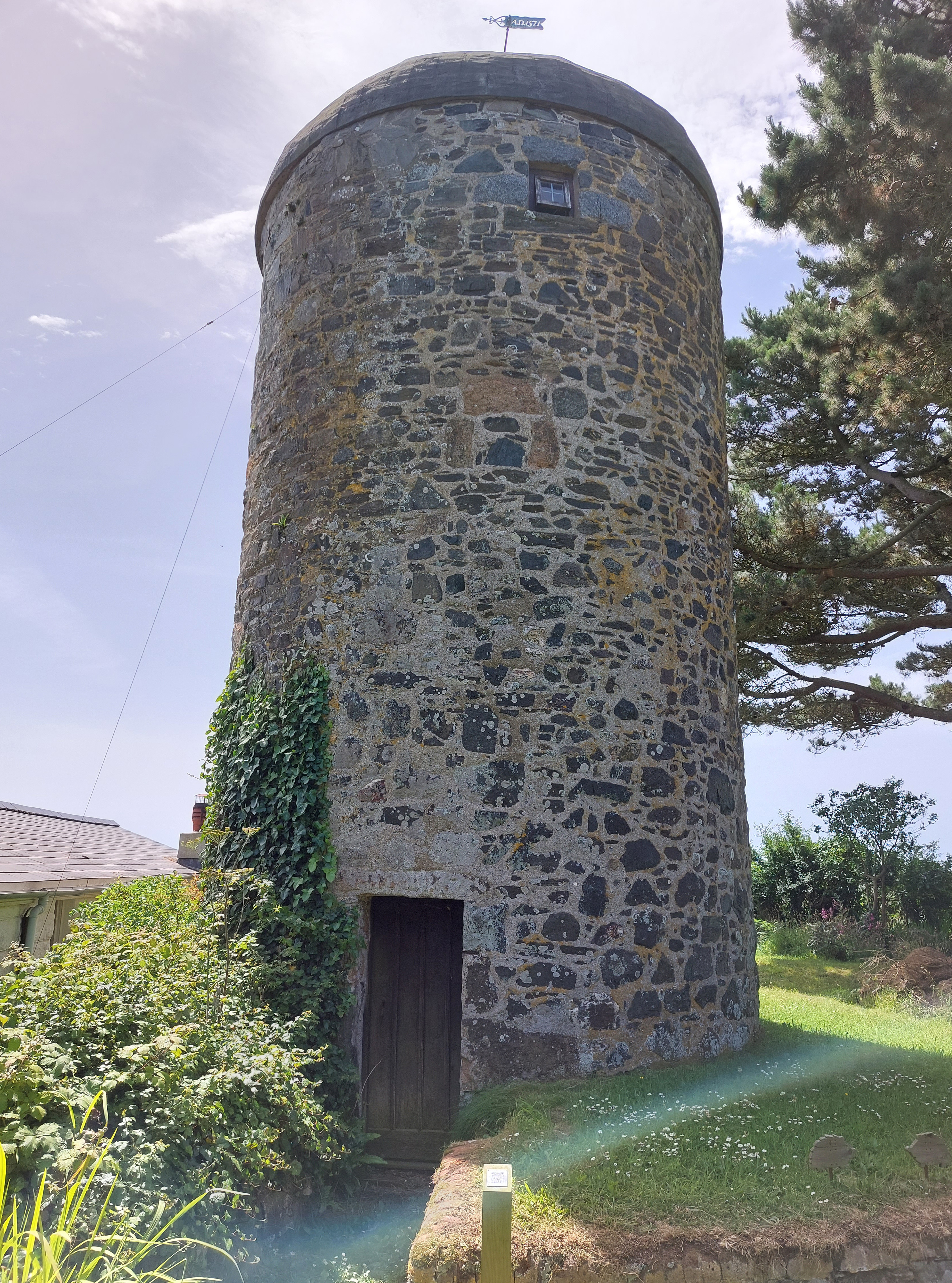 This old windmill, near the edge of the main village, is the highest point on the island. 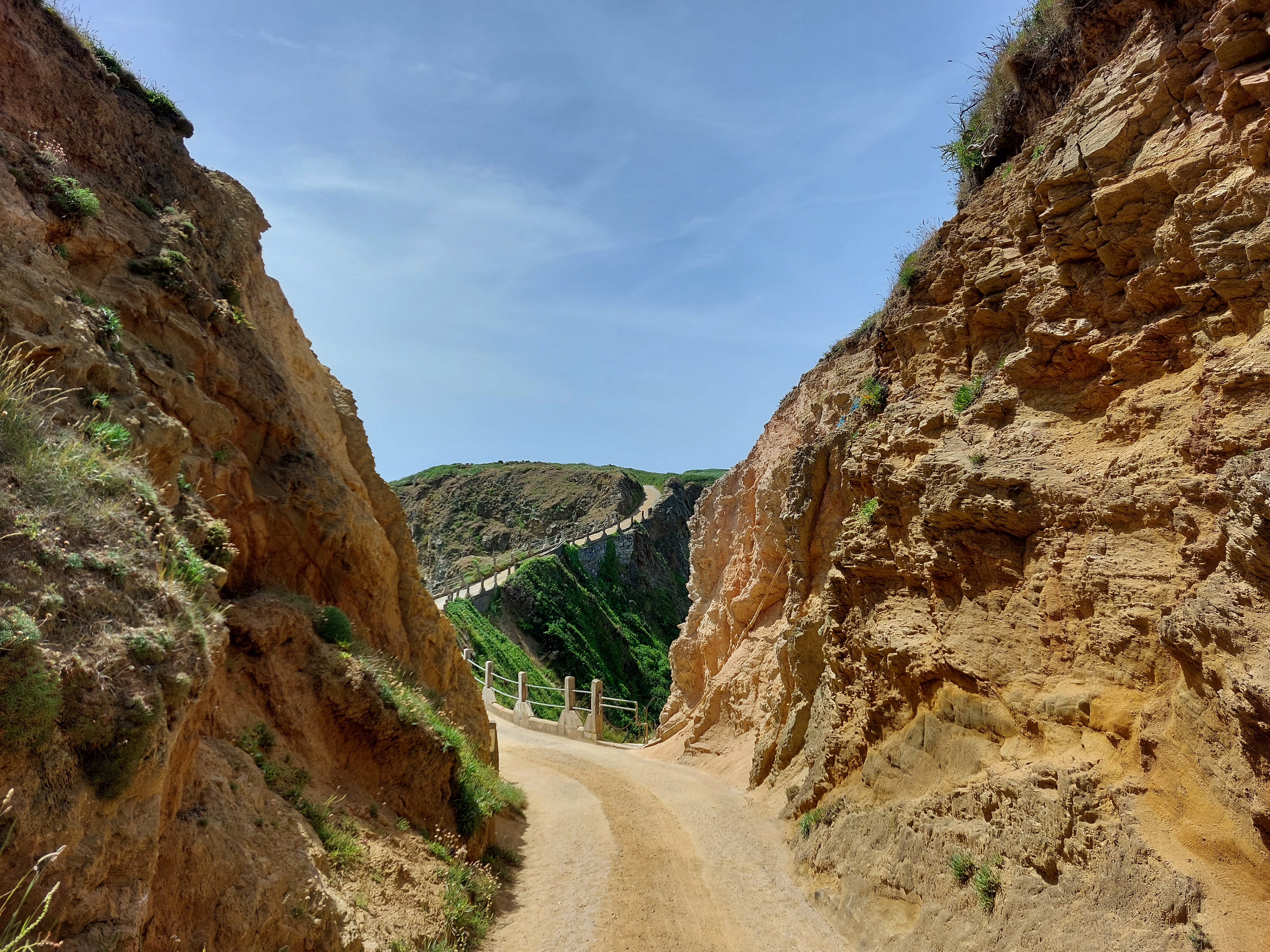 Now on down the road to La Coupee, the causeway that connects the main part of Sark to the smaller southern section. A hundred years or so ago this was just rickety rail-free narrow line so dangerous people had to crawl across on hands and knees (especially in high wind). The current concrete and railed section was built by German POWs during the war. 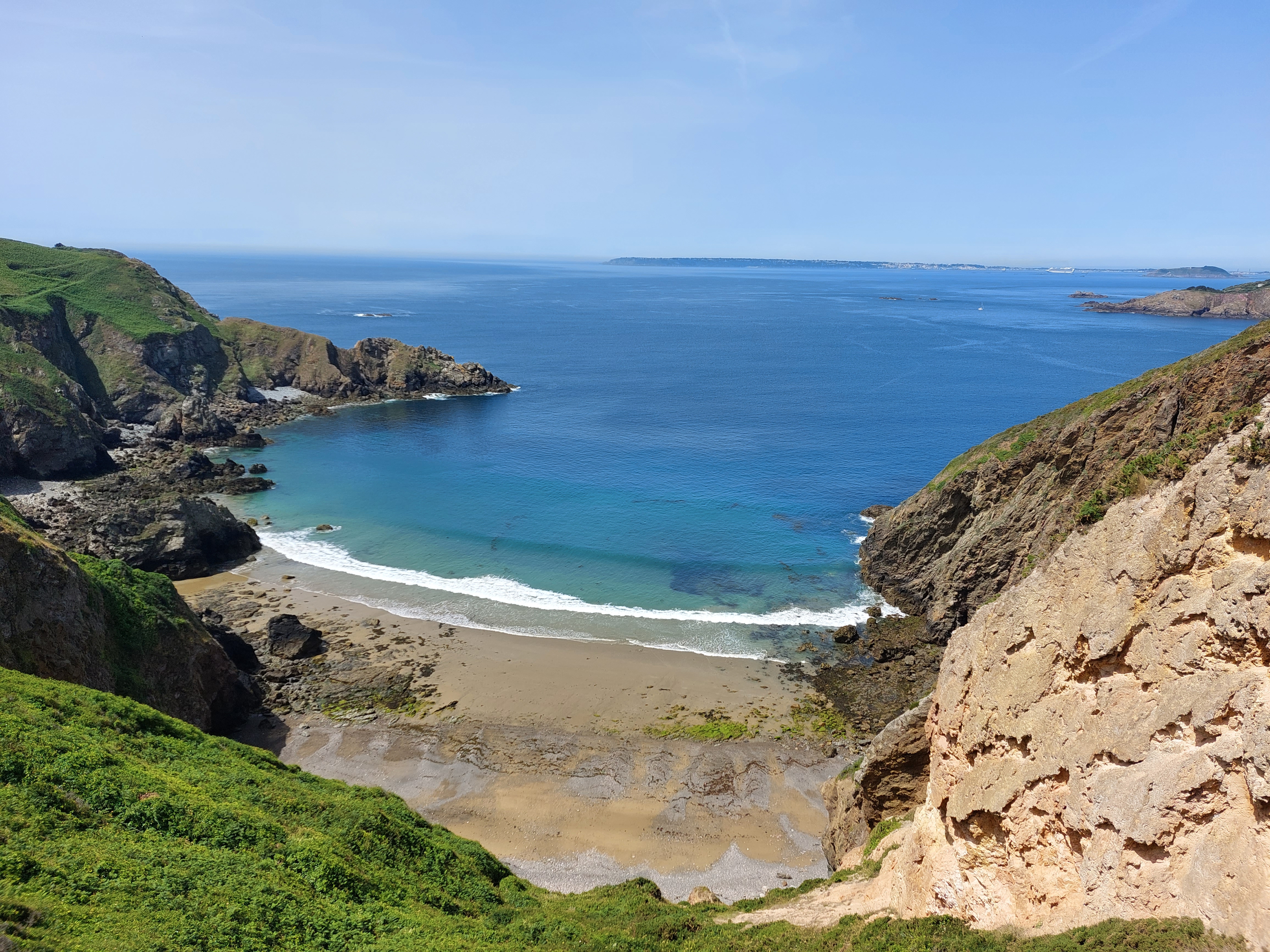 Here’s a view looking out to the right (west) back at Guernsey, taken from the middle of the causeway. 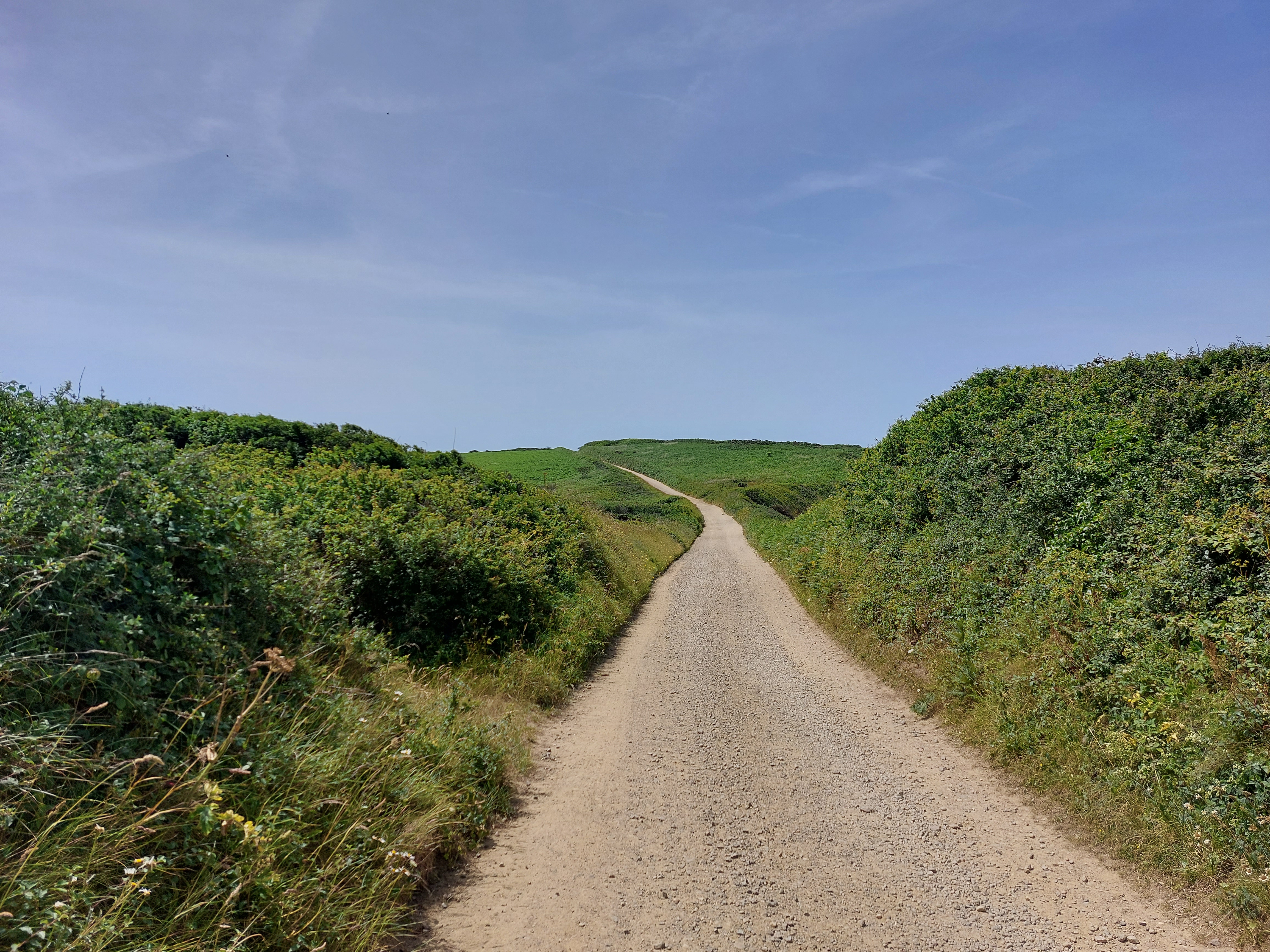 They don’t let you bike through Le Couree, but on the other side it was back in the saddle, and it looked like I was going to ride right off the end of the island. (All the roads were gravel like this. I’m sorta glad I didn’t have my regular bike after all). 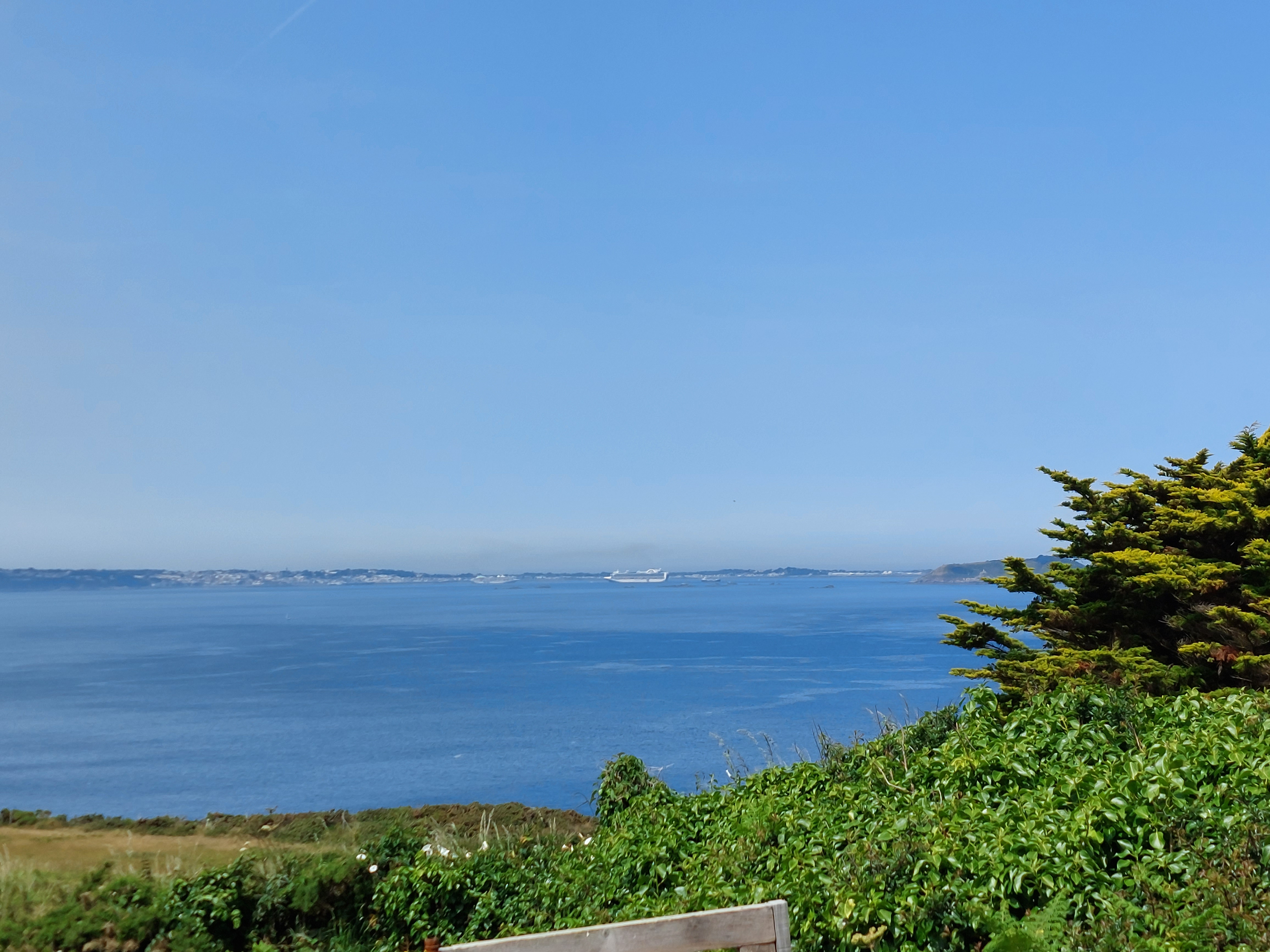 The view from the end of the road. Not too great...I’ll do better later. 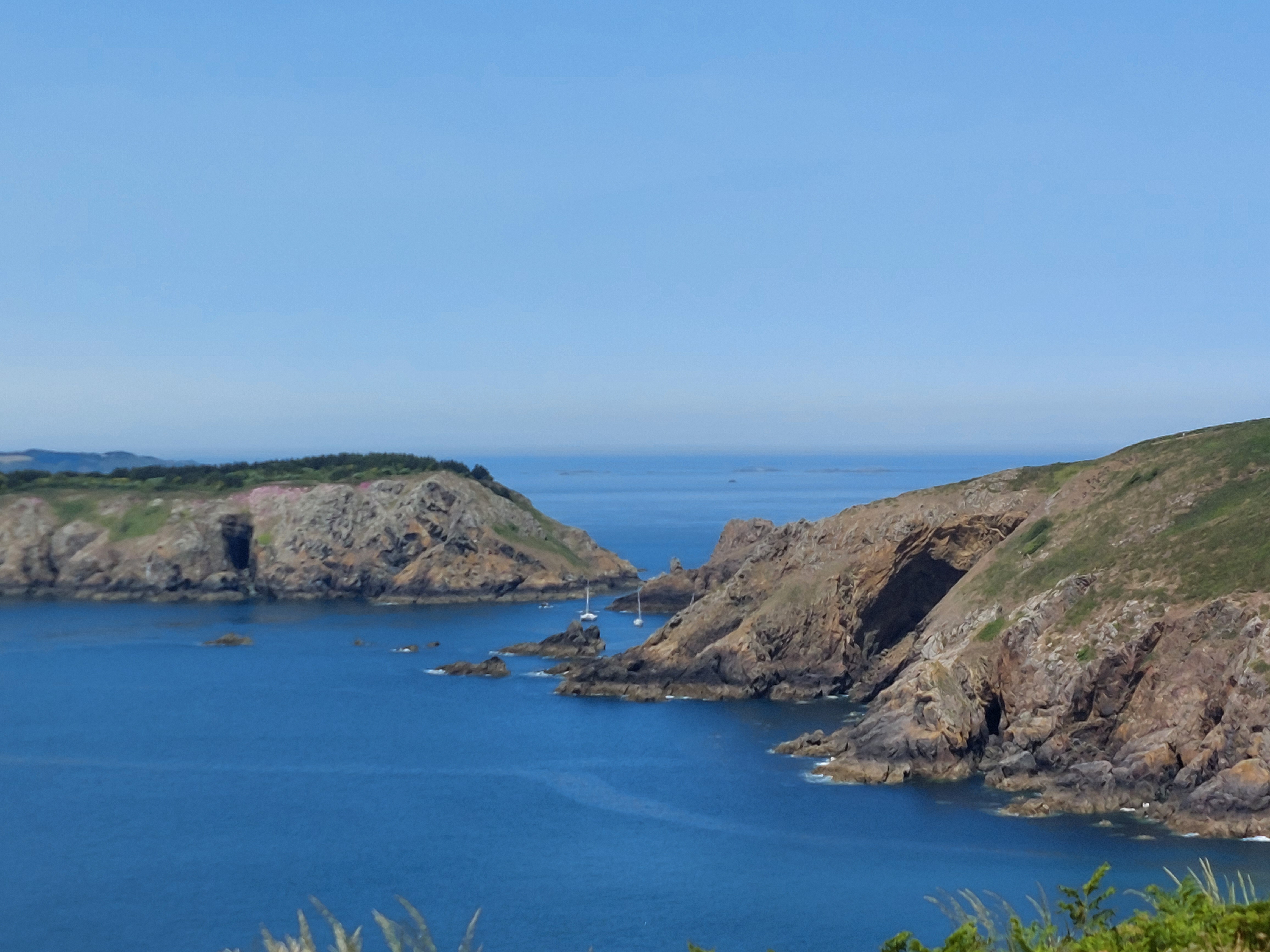 Here’s a nice shot from one of the geocaches I tracked down. 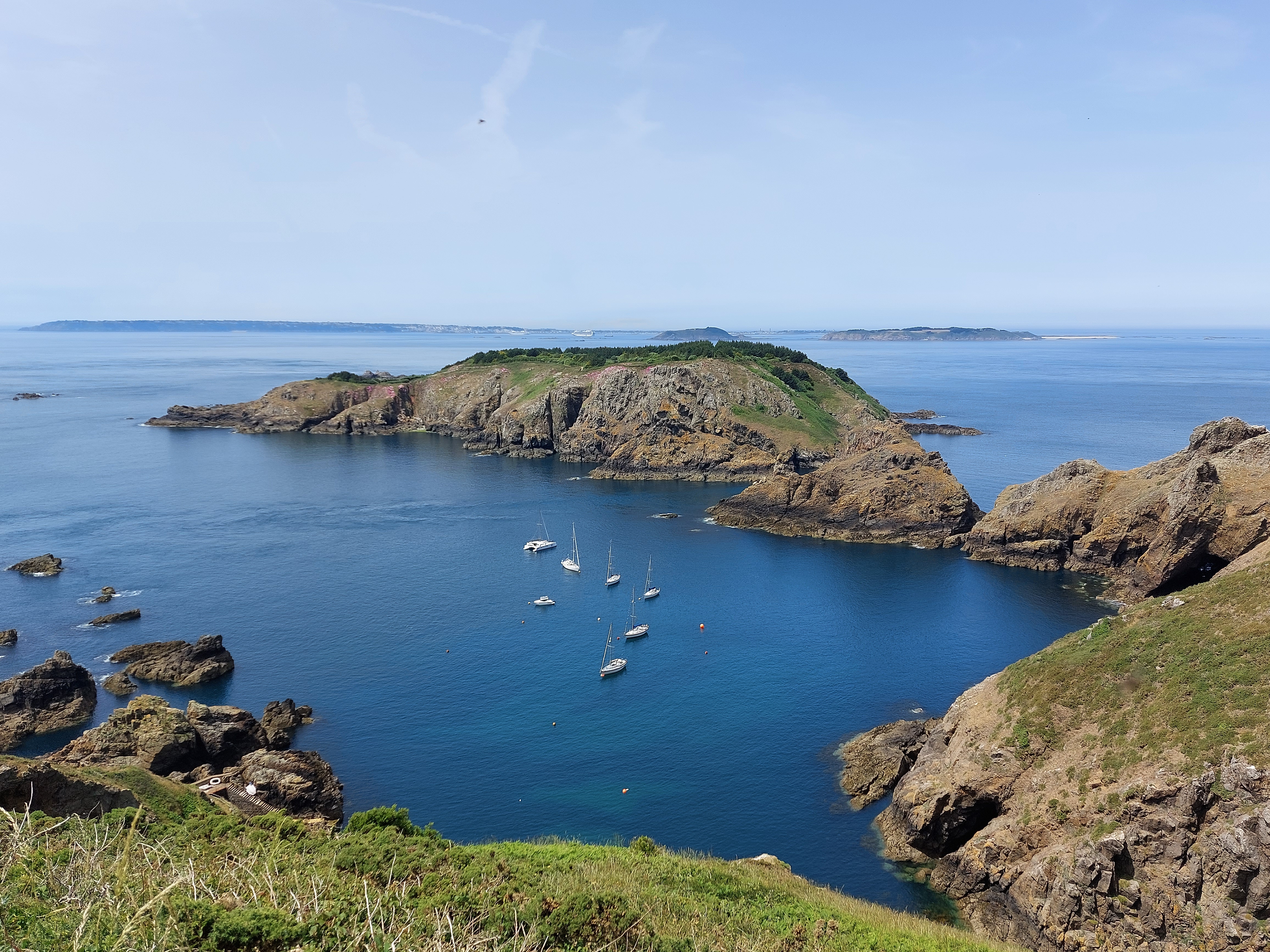 Another, even better one from further up the west side of the island. 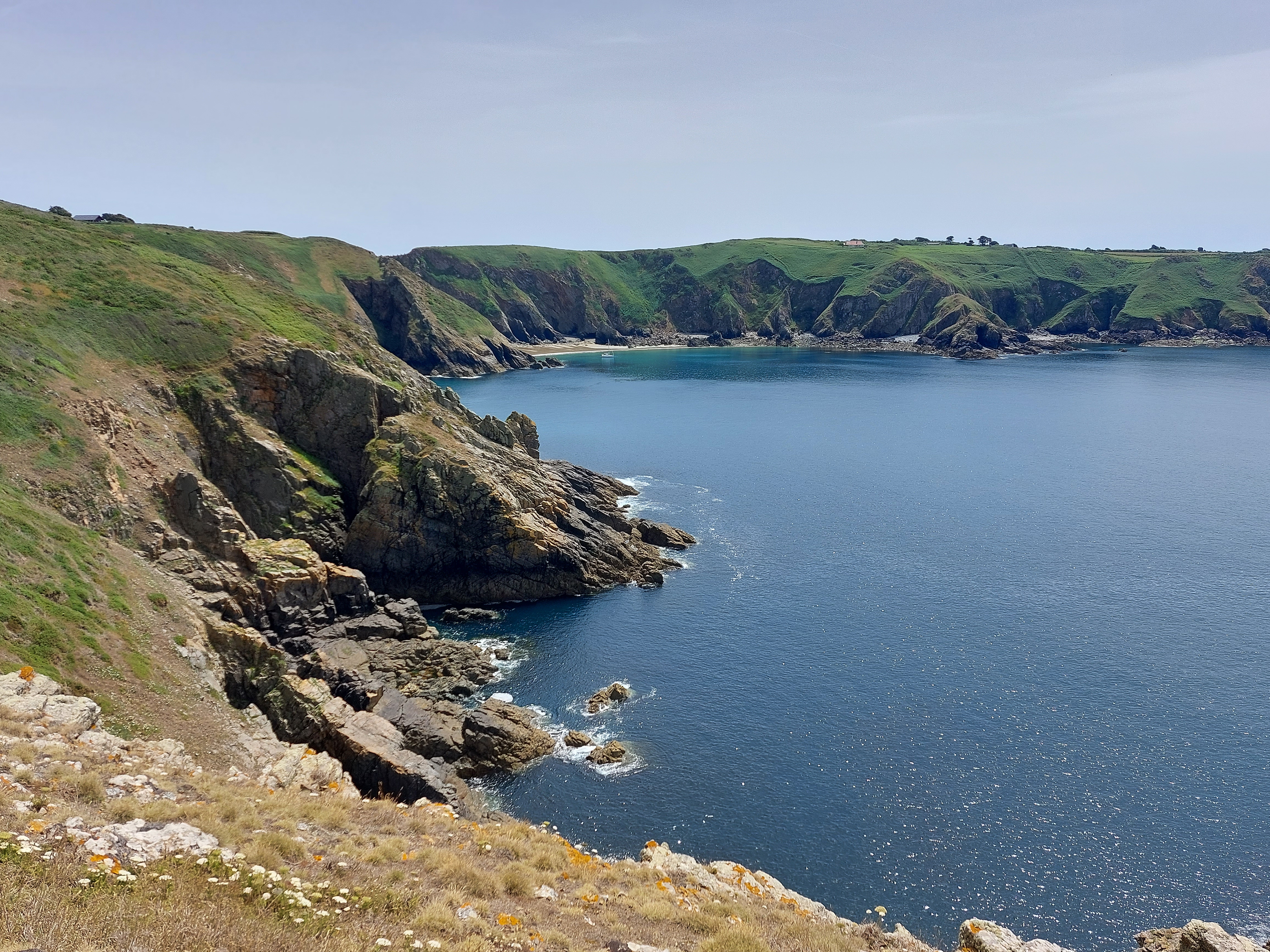 Looking back at the coast the way I came. It’s really beautiful here. 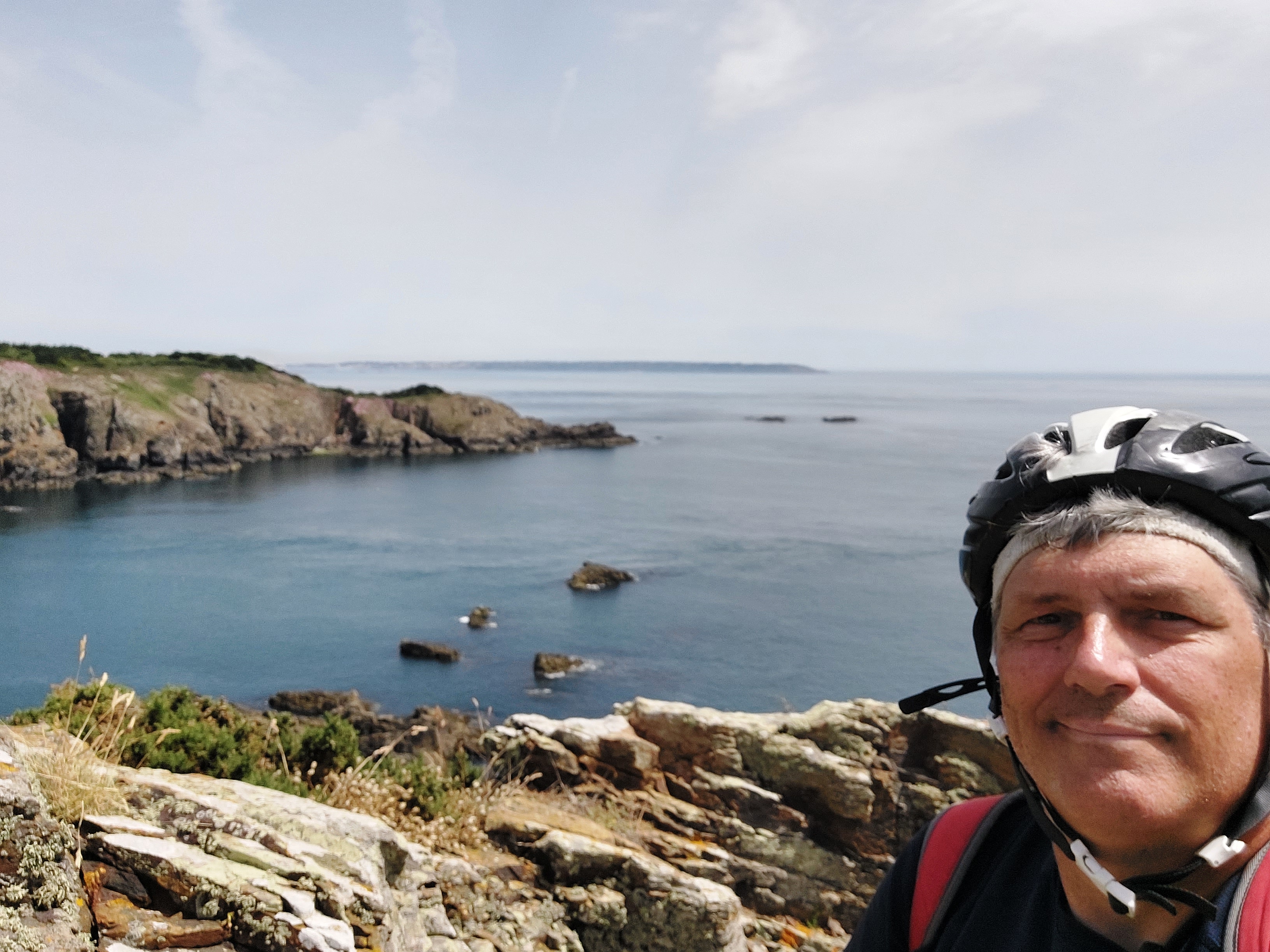 Just had to get at least one selfie while I was here. 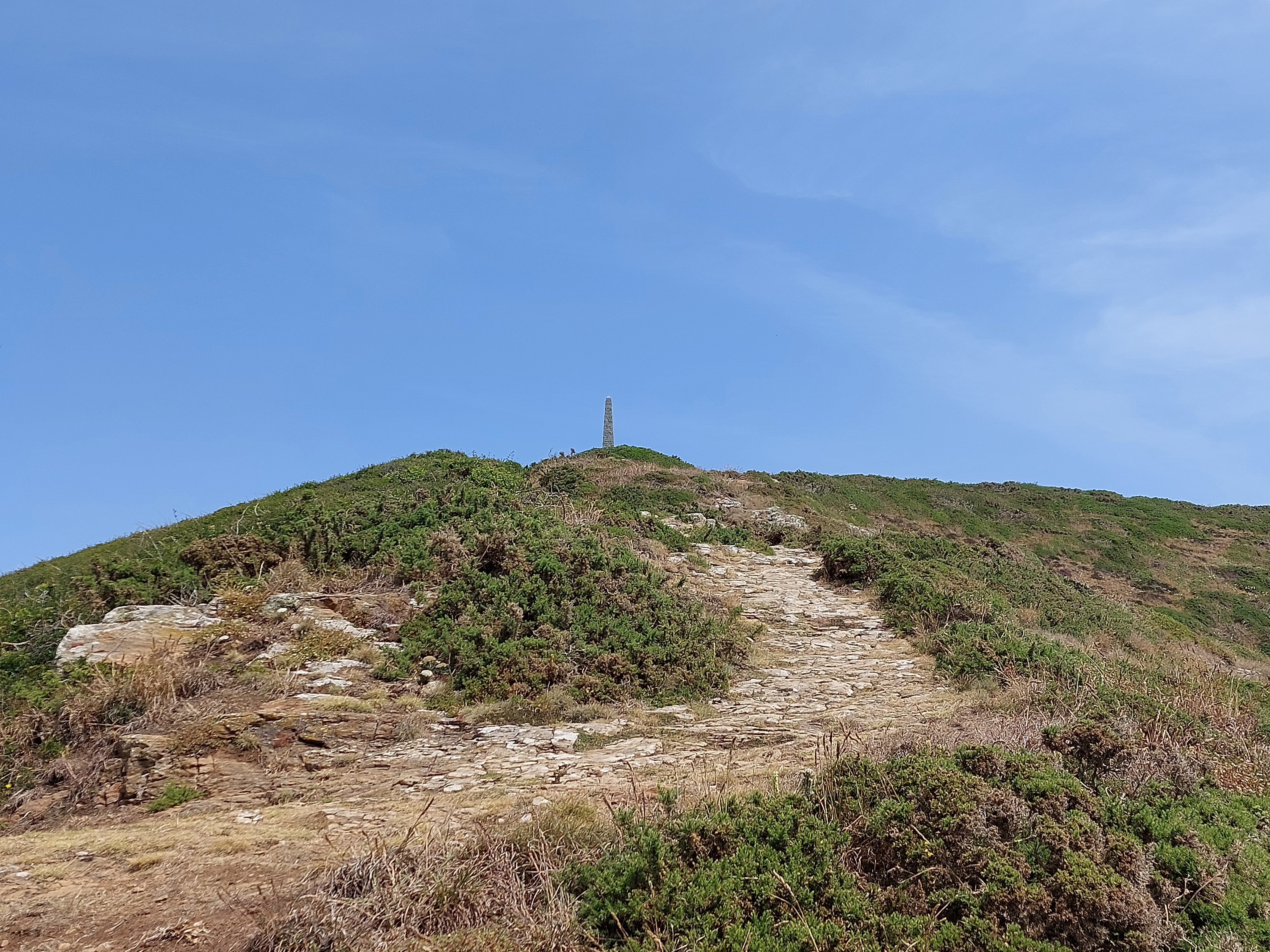 I wasn’t on the bike the whole time...I did do some hiking, some of it steep. In this case I had to come all the way down here for a cache, then hike back up to that monument (which is to a local who was lost at sea). 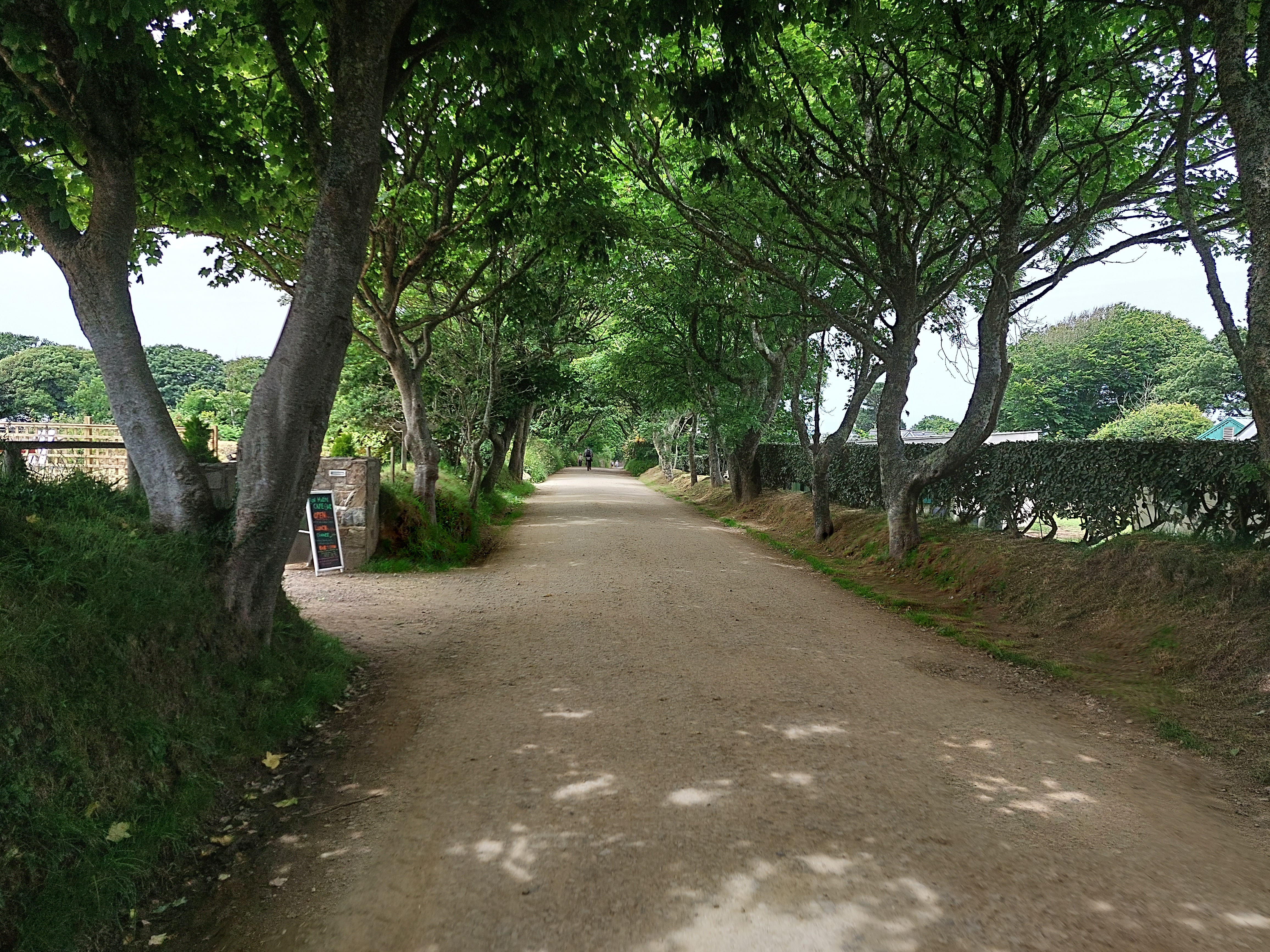 Now I headed northward, and the roads were generally like this most of the way. 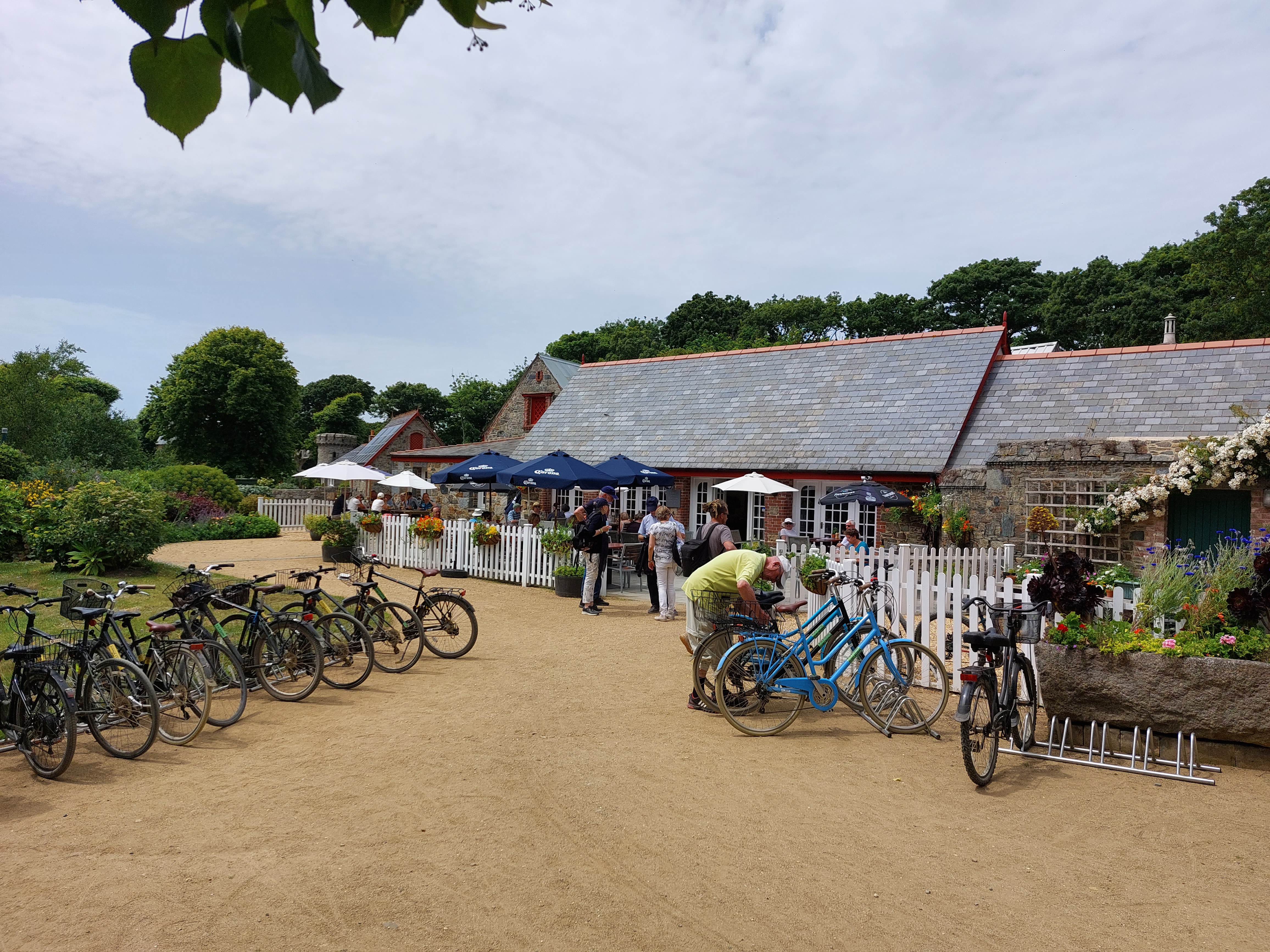 Far from being primitive, Sark had everything modern you could expect (except cars and streetlights). Here’s a local restaurant, and notice how everything is set up to accommodate bikes. I really like this place. 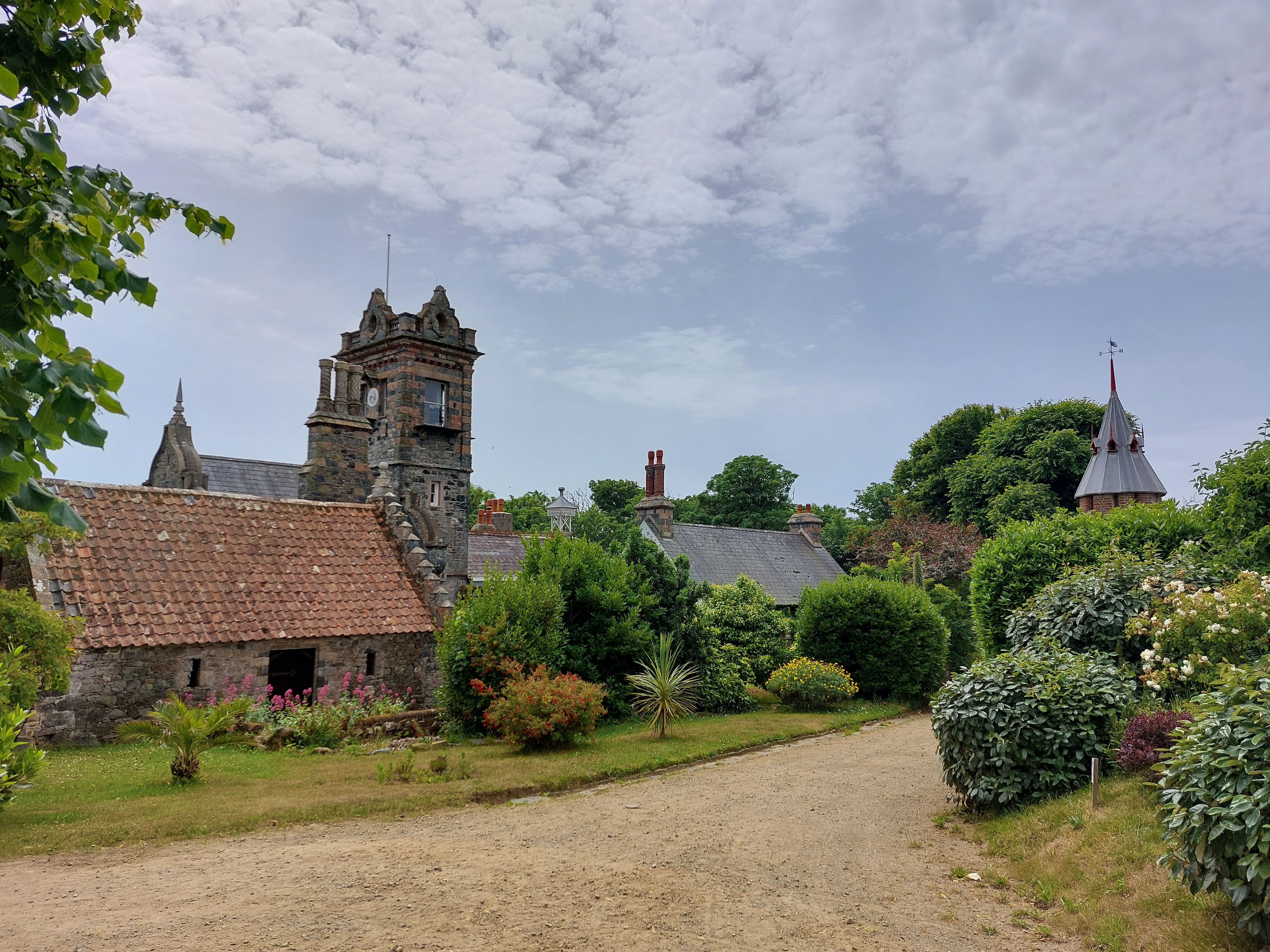 This is where the local governor lives. Not bad. 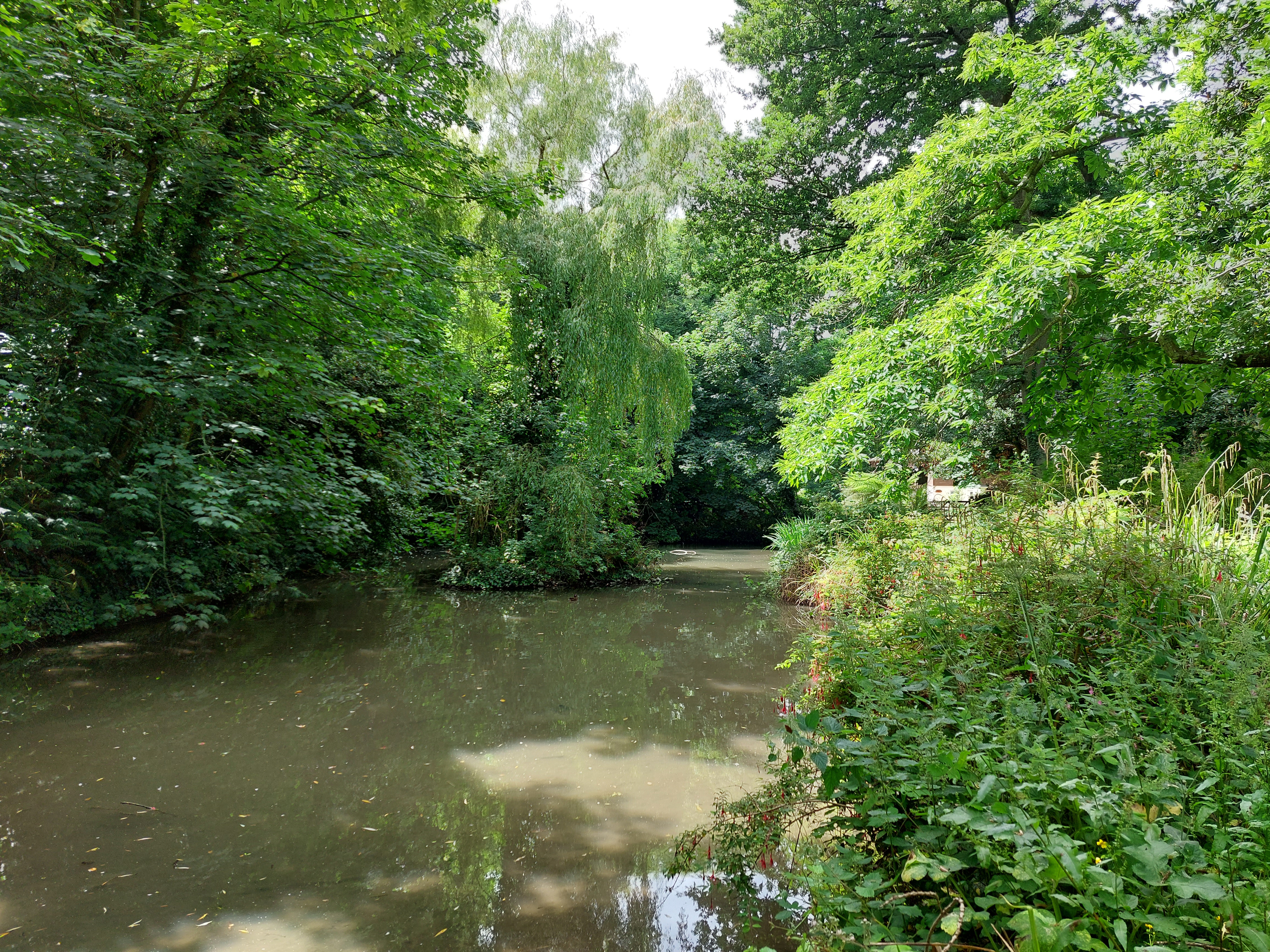 Not everything is rocky or grassy here either. They do have a couple of small lakes and the accompanying vegetation. And mosquitoes. 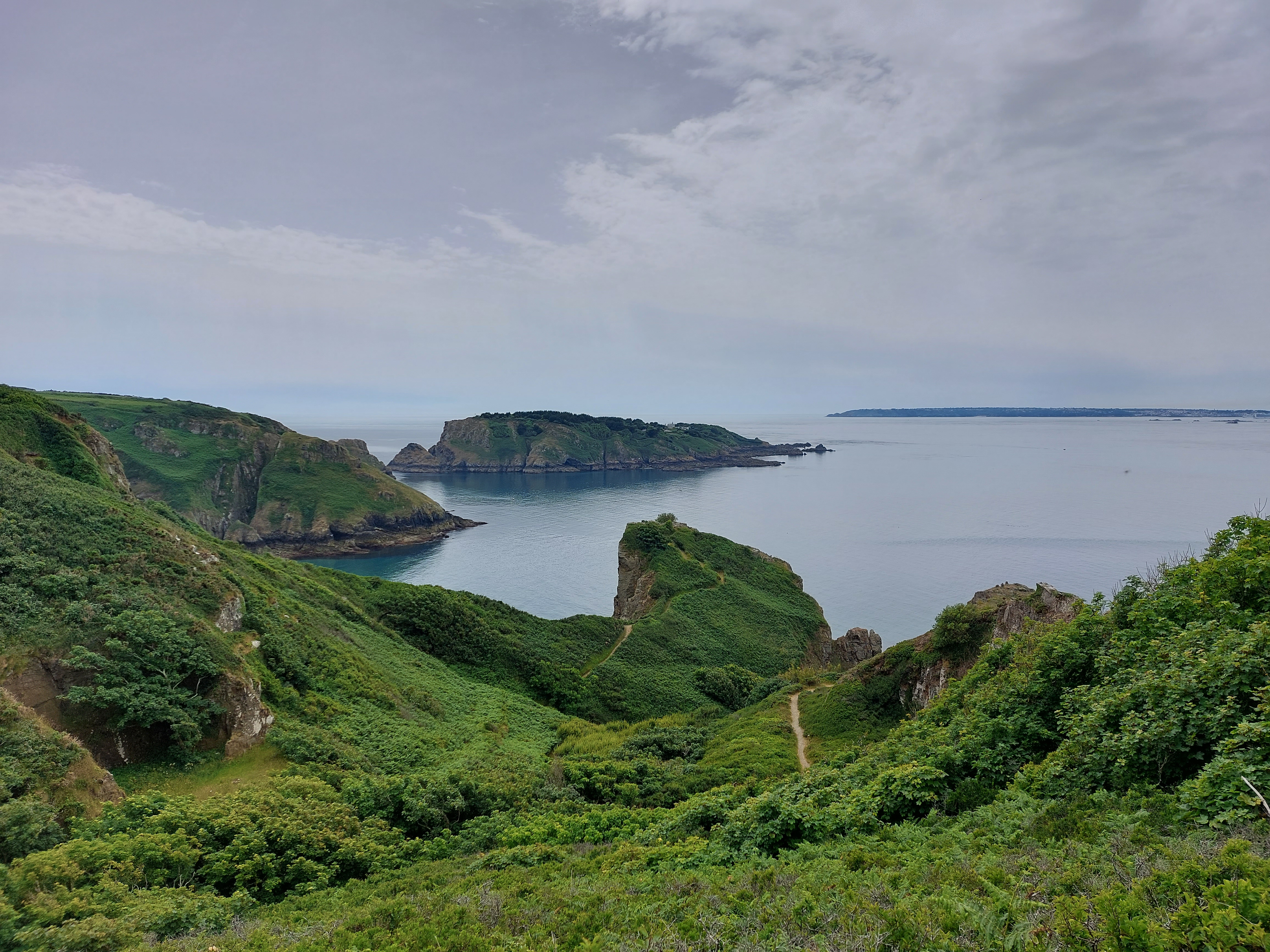 This is near the northern shore. I had thought to go hike that trail down there, but time was growing short by this point so I turned about. 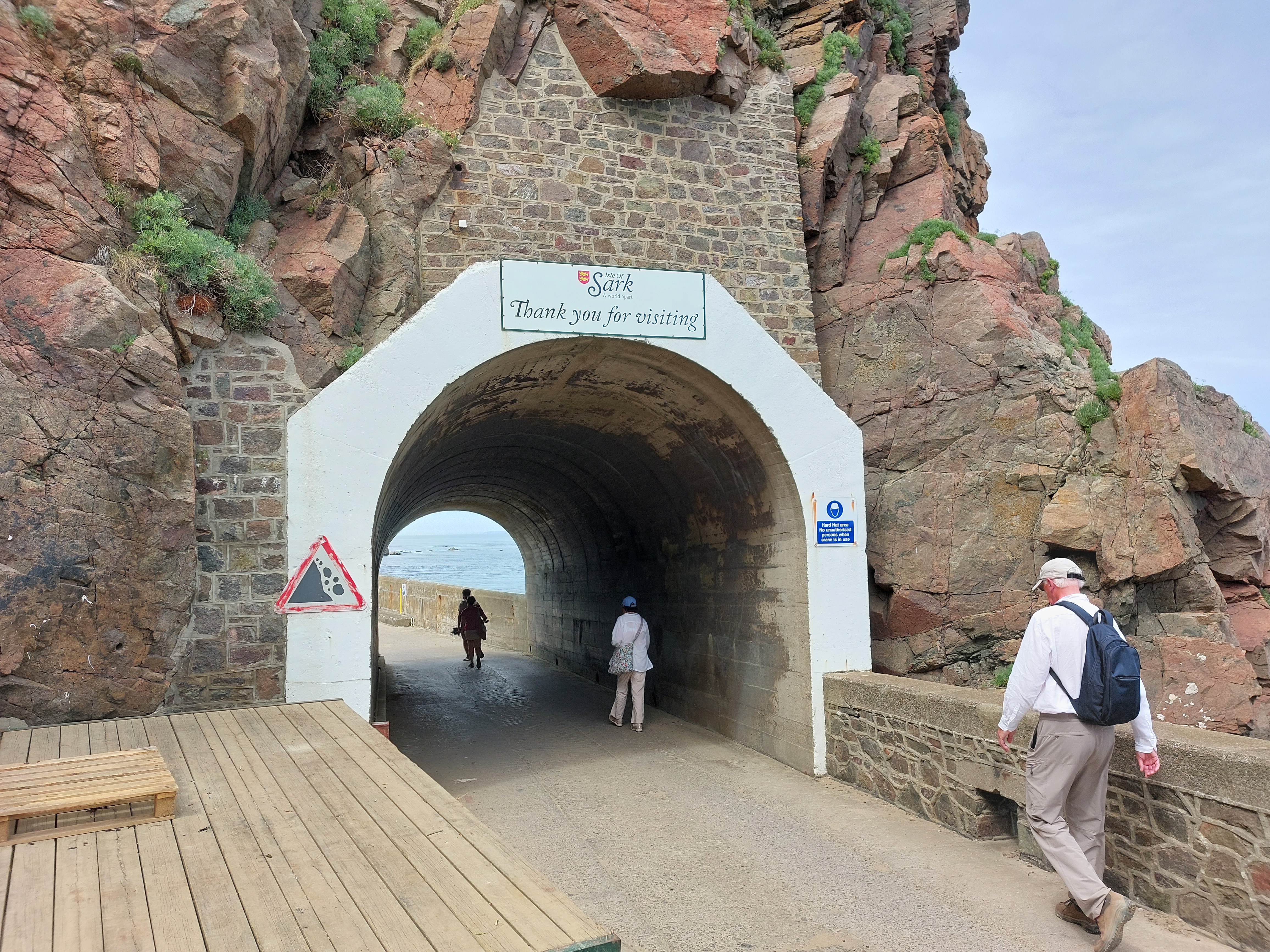 Time to go, I’m afraid. Back through the narrow exit tunnel. 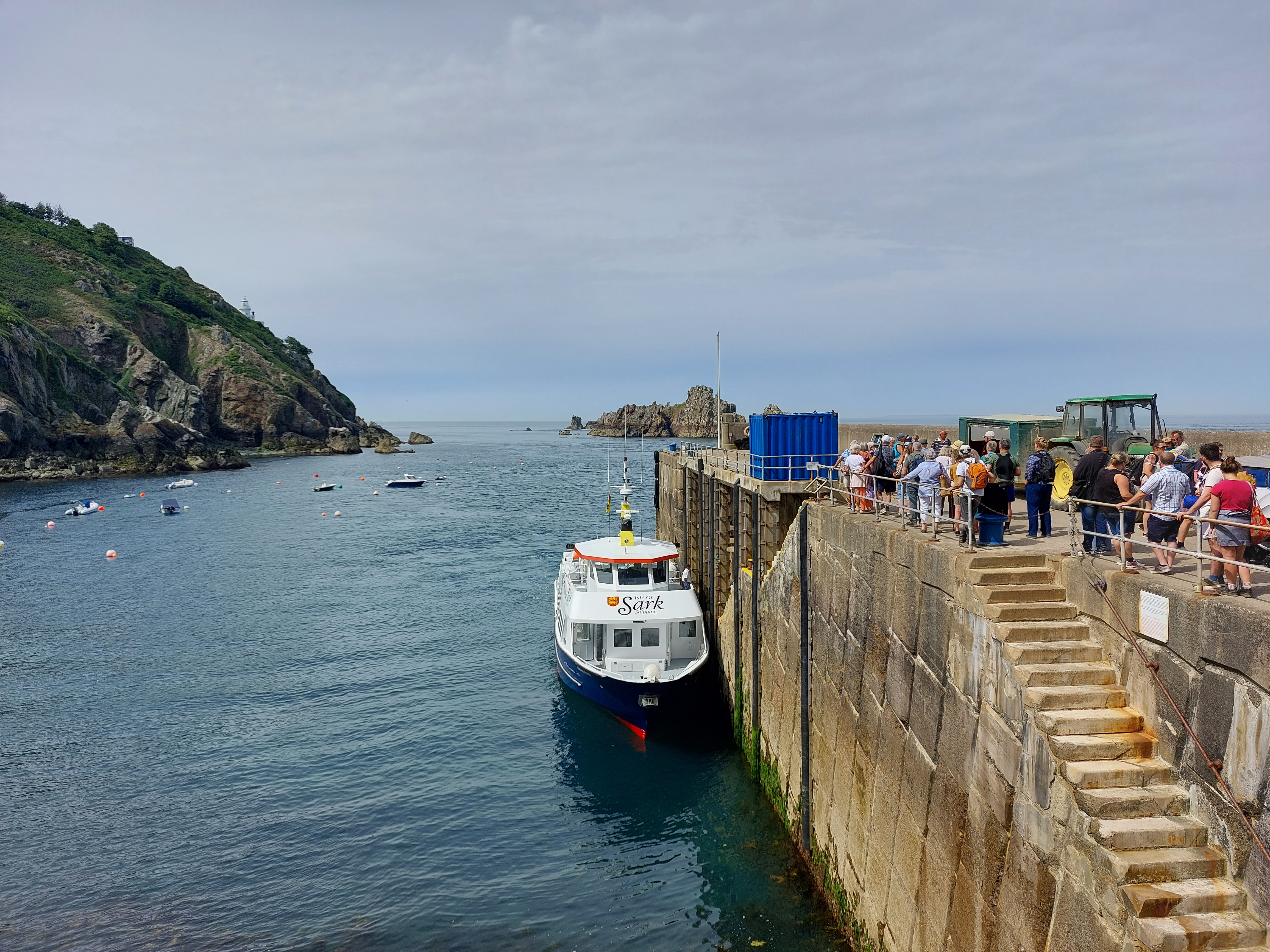 Here’s what the tiny harbor looks like and the slippery stairs you have to climb to get back down to the ferry (plus it was low tide so even farther than usual). I don’t know how people who need wheelchairs are supposed to visit this place (maybe there’s a secret lift somewhere). While waiting in line for the ferry to show up, I had a long conversation with some visitors from London who gave me some tips about what to expect on my ride to Exeter in a few days. Suffice to say, it’s going to be challenging. 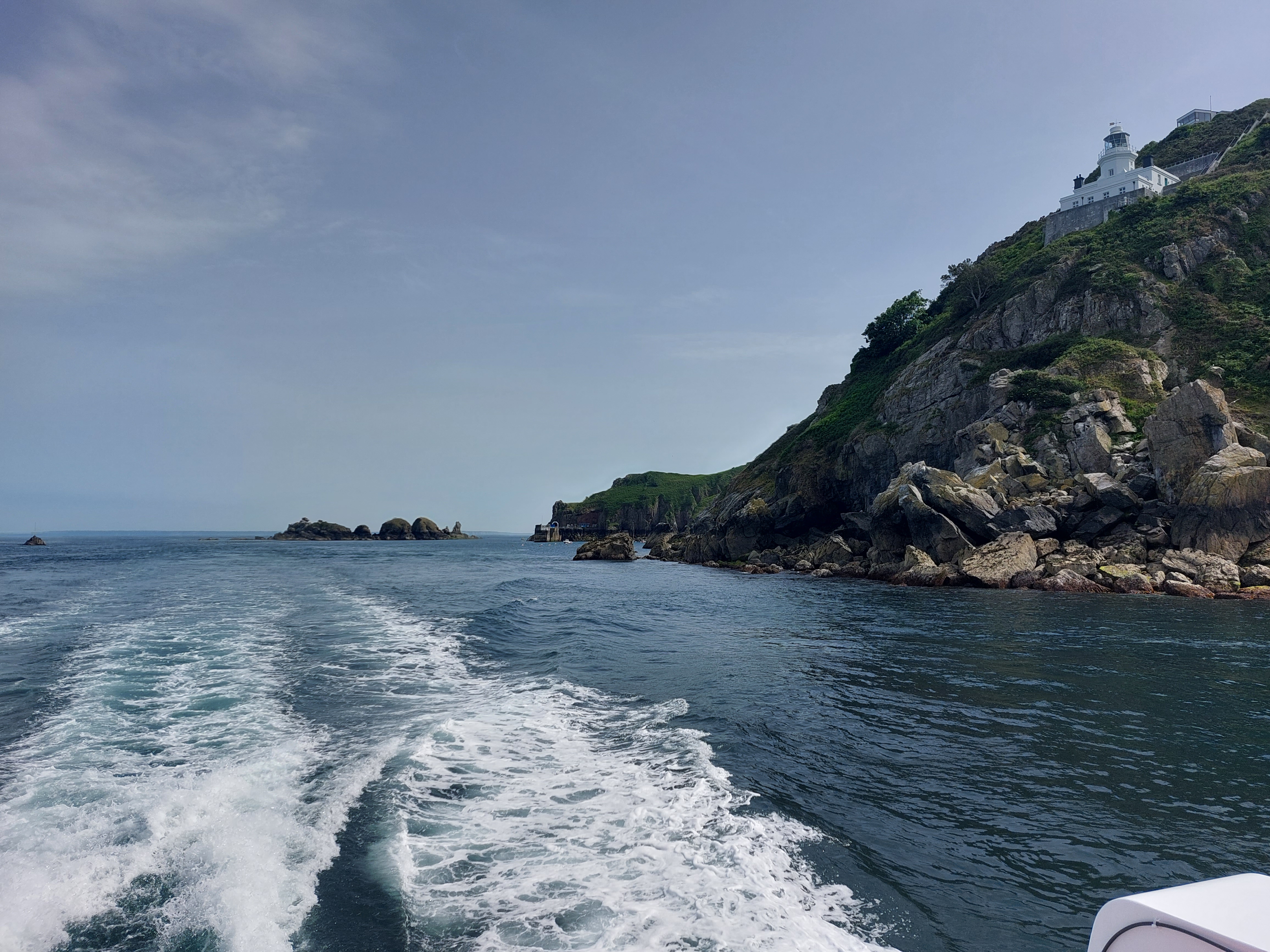 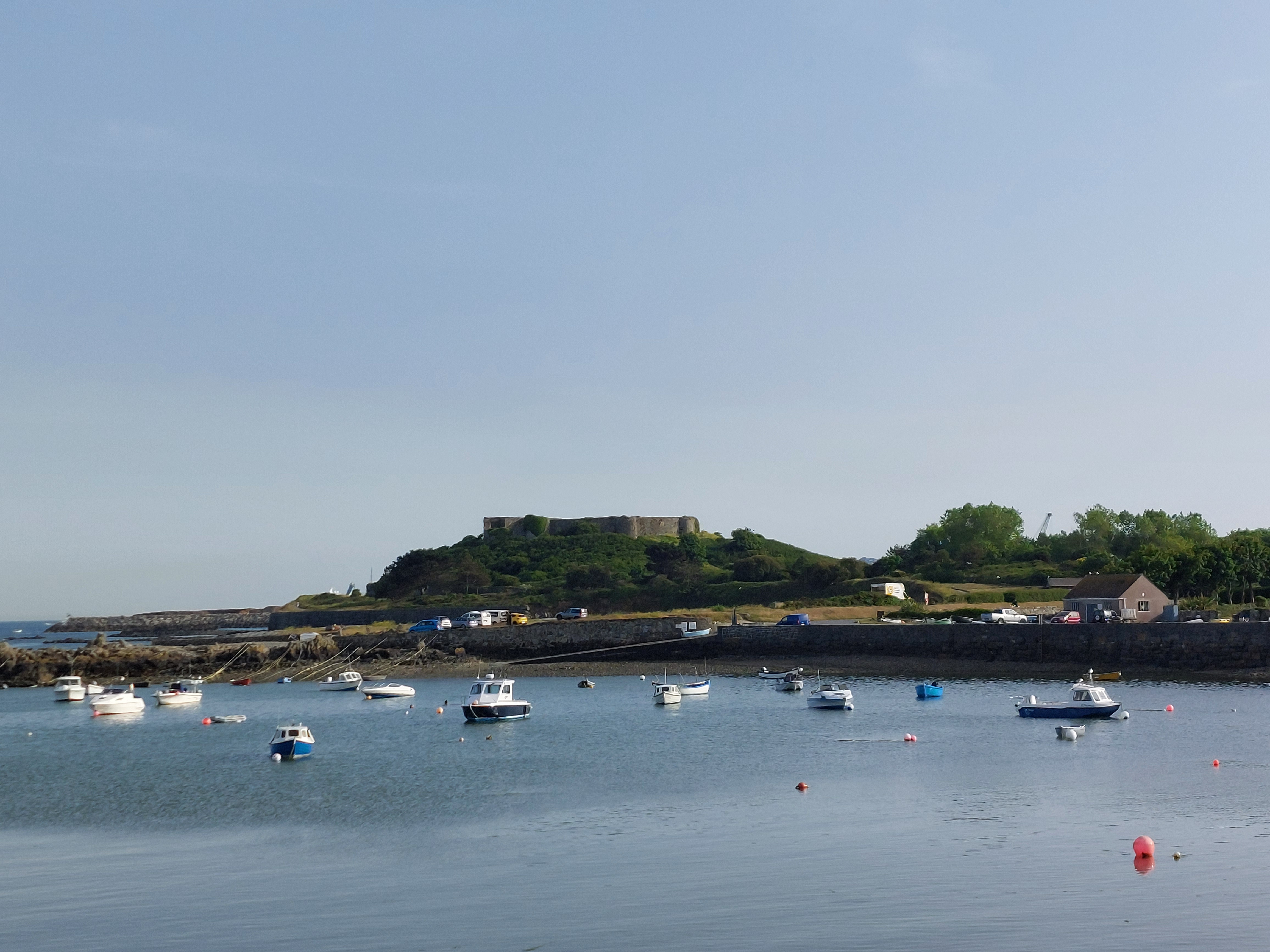 Now for a couple more hours riding around Guernsey. Hey, wait, didn’t I say no more pictures of that fort? Ha, fooled you, it’s a totally different fort.

Sark is home to numerous ancient burial caves like this one, open to the public. Ooh, scary! Shall we go inside?

Yep, it’s spooky all right. And also the ceiling was only about 4 feet high. I didn’t fancy crawling so I retreated after a minute or so. 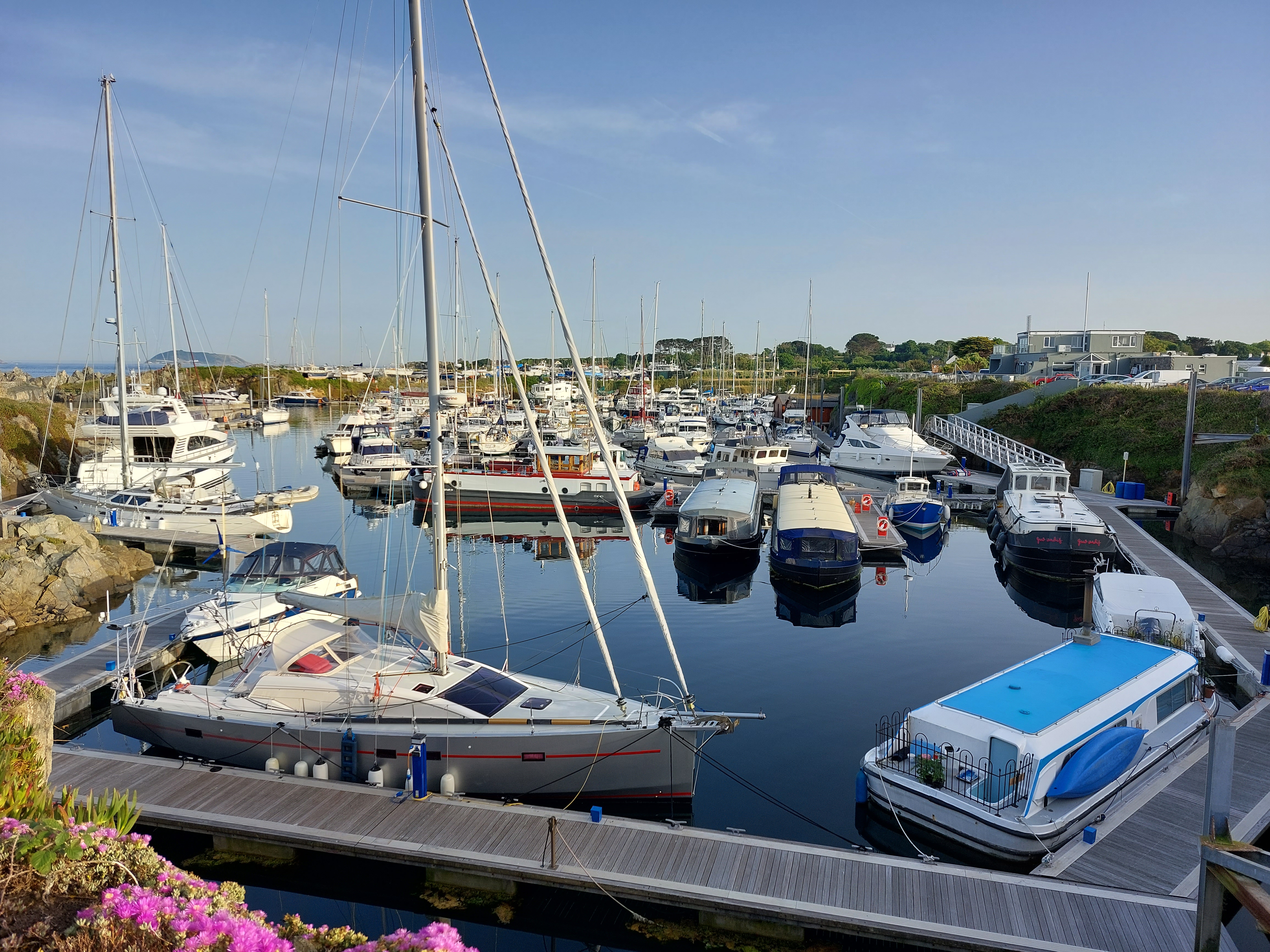 Back out to the road I went, heading along the coast for a bit. Wow, they sure can pack a lot of boats in this tiny space! And that’s it for the photos from today...at this point I headed back to camp, picked up a couple of caches as I went, and called it a day. Back to mainland England tomorrow.