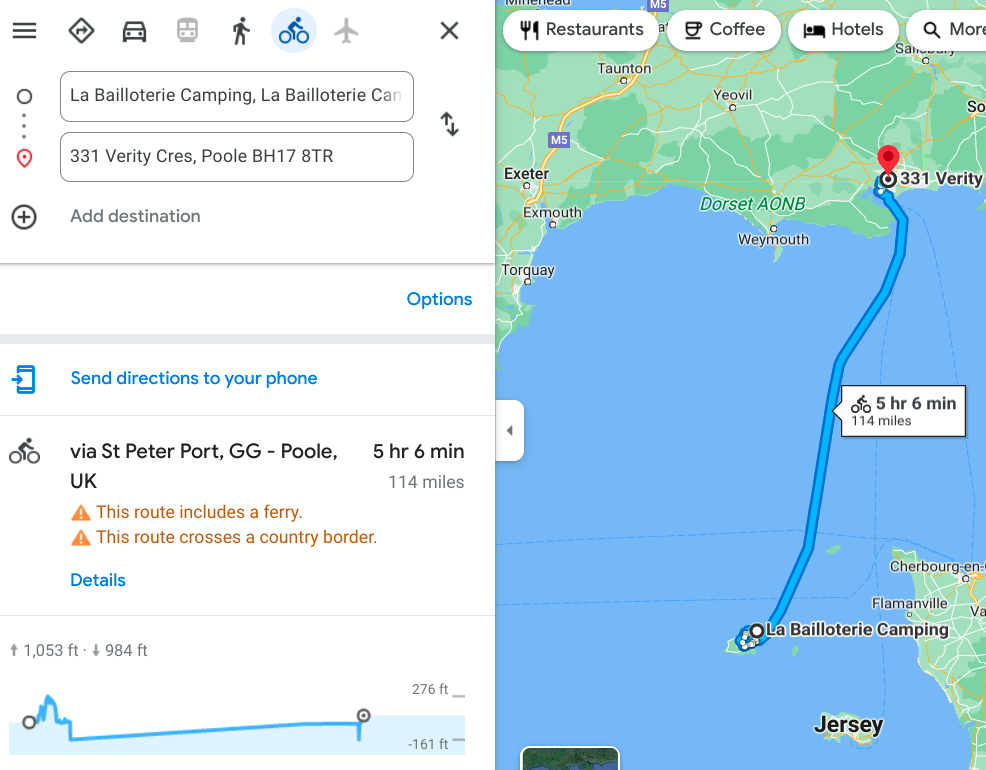 Guernsey-Poole
Miles: 20 (or so)
Terrain: Some short but tough climbs
Weather: Comfortable and no significant wind

For my last day on Guernsey I decided to head over to the west side and collect as many more geocache finds as possible. The island is small enough that you can theoretically bicycle around the whole thing in a day, but that would be a lot of hill climbing and I’m going to get enough of that soon, thank you very much. So instead I set my sights on a particular item of interest and meandered my way over there, in no particular hurry, other than to be back in time to make the ferry.

The point of interest in question is a little chapel with an interesting history. Rather than try to break it down for you myself, here’s the link to a much better description. Its exterior and interior are both covered floor to ceiling in just about anything shiny you can think of, mostly pieces of broken mugs, pottery, and so on. Take a look at the photos later...it’s really cool. I spent about an hour there, because a tour group showed up just as I did, and I sort of tagged along listening in on the explanation. As they left, another tour bus pulled up. Quite the popular destination, the Little Chapel. Anyway, after that, it was getting a bit late, and I had to go back to camp, pack up everything, grab a shower, check out, and get on the road to the ferry, so to make all that happen I got back to camp about 4:15, which was just about right.

The ferry, as it turns out, had sent me a message two days before saying that because of staff shortages, they were tightening up the route a little and the boat would now leave an hour early, meaning it would sail from 6:30-9:30pm. I had previously contacted a lodging place (not sure what to call it since it’s not really a hostel or airbnb, but you’ll see more about it later) about whether or not I could arrive at around 11pm (the original time I would expect to be there) but now, with the trip moved up an hour, I felt I had nothing to worry about. Ha!

Of course, departure was delayed, because of course it was. There was another freight ship using the dock and it didn’t leave on schedule which forced the Guernsey-Jersey ferry to wait, and of course ours then had to wait for that one to finish loading and depart. We didn’t actually leave until 8pm, half an hour later than we should have originally. I frantically sent message after message to the person I’d booked the room with, but got nothing but silence, so I spent the whole ride fretting over whether or not I’d actually be able to get in or not, and what to do if I couldn’t. I ultimately decided the only possible course, should disaster fall, was to ride about another hour west to a campground and just pitch my tent in some open spot, and pay the owners in the morning. The cheapest hotel anywhere nearby that would still have a front desk operating after midnight would’ve cost 200 pounds (since it was Friday night). I’ll take my chances at the campsite, I figured.

Luckily that wasn’t necessary. After making my way about 4 miles through Poole in the dark, I got to the house and knocked a few times until the guy working there let me in. Turns out he was actually a lodger as well, but was there for a couple of months, so the owner (who was on holiday in Spain) conscripted him into being the greeter while she was away. I woke him up, but he didn’t mind much and after a nice conversation (and loads of thanks from me) he showed me to my cozy garage which wound up being super comfortable. In fact maybe too comfy, because I didn’t want to leave the next morning and set out a bit on the late side...but I’ll save that story for the next entry. Now for today’s photos. 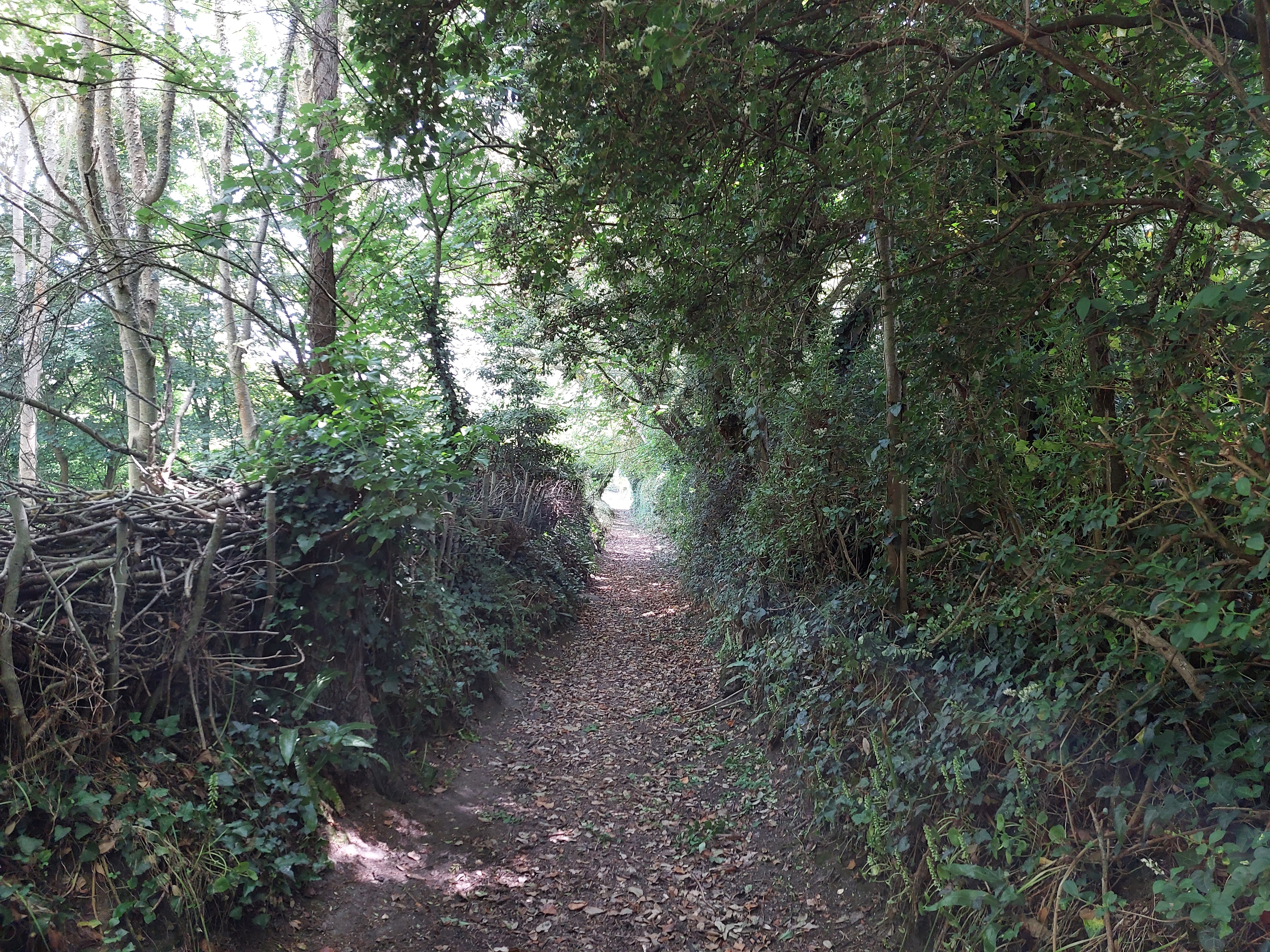 Guernsey is lined here and there with these neat little pathways that are like secret passages between neighborhoods or streets. Though technically footpaths, you can bike through them too. Since the roads are narrow and frequently crowded, I liked finding places like this to sneak around. 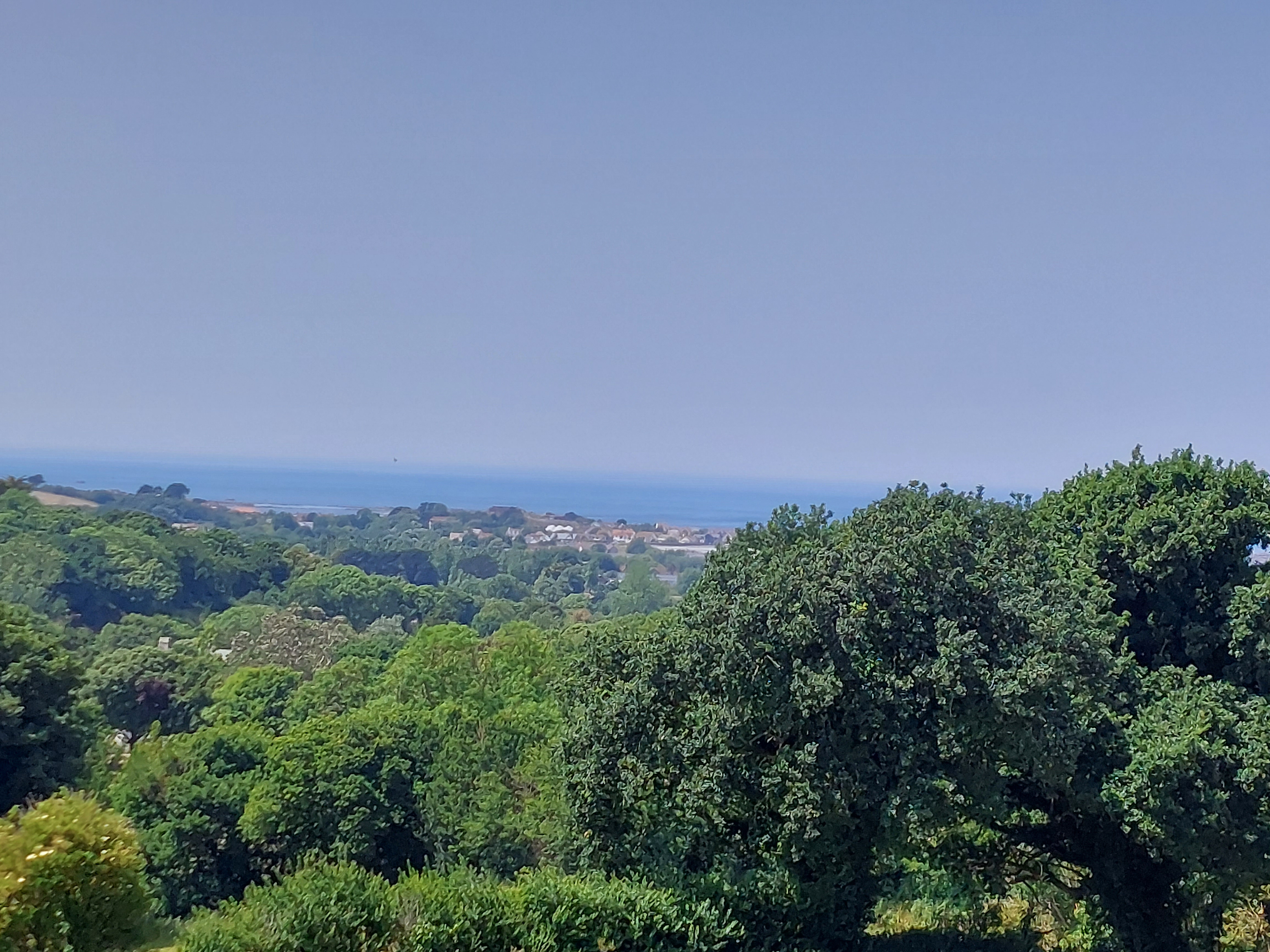 Everywhere you go on this island, gorgeous views poke out from over the trees. 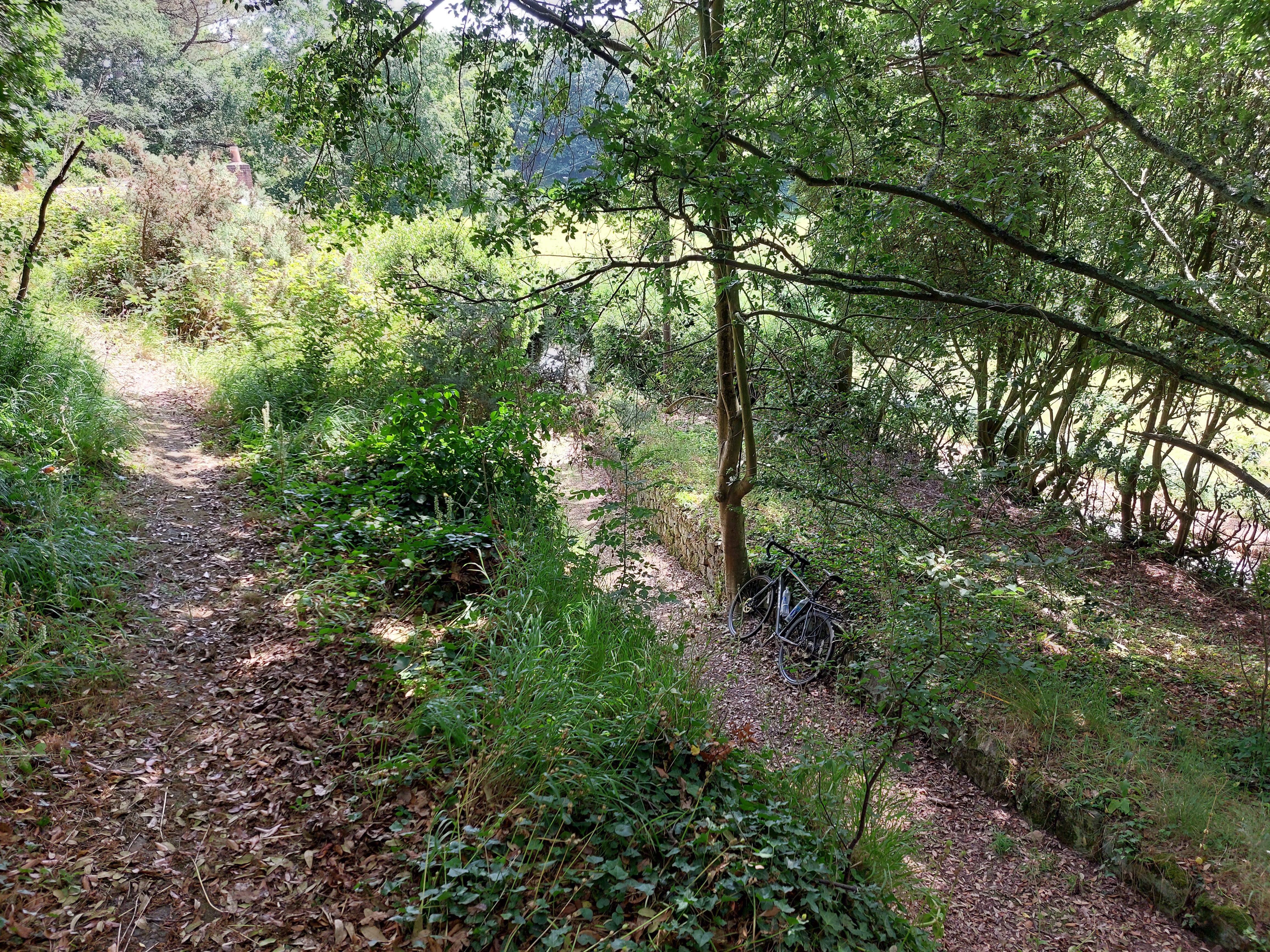 Here’s another one of those hidden footpaths. This one led to a geocache, so I left the bike behind as I went up a couple of switchbacks. If you like hiking around, this is a pretty good island for that. 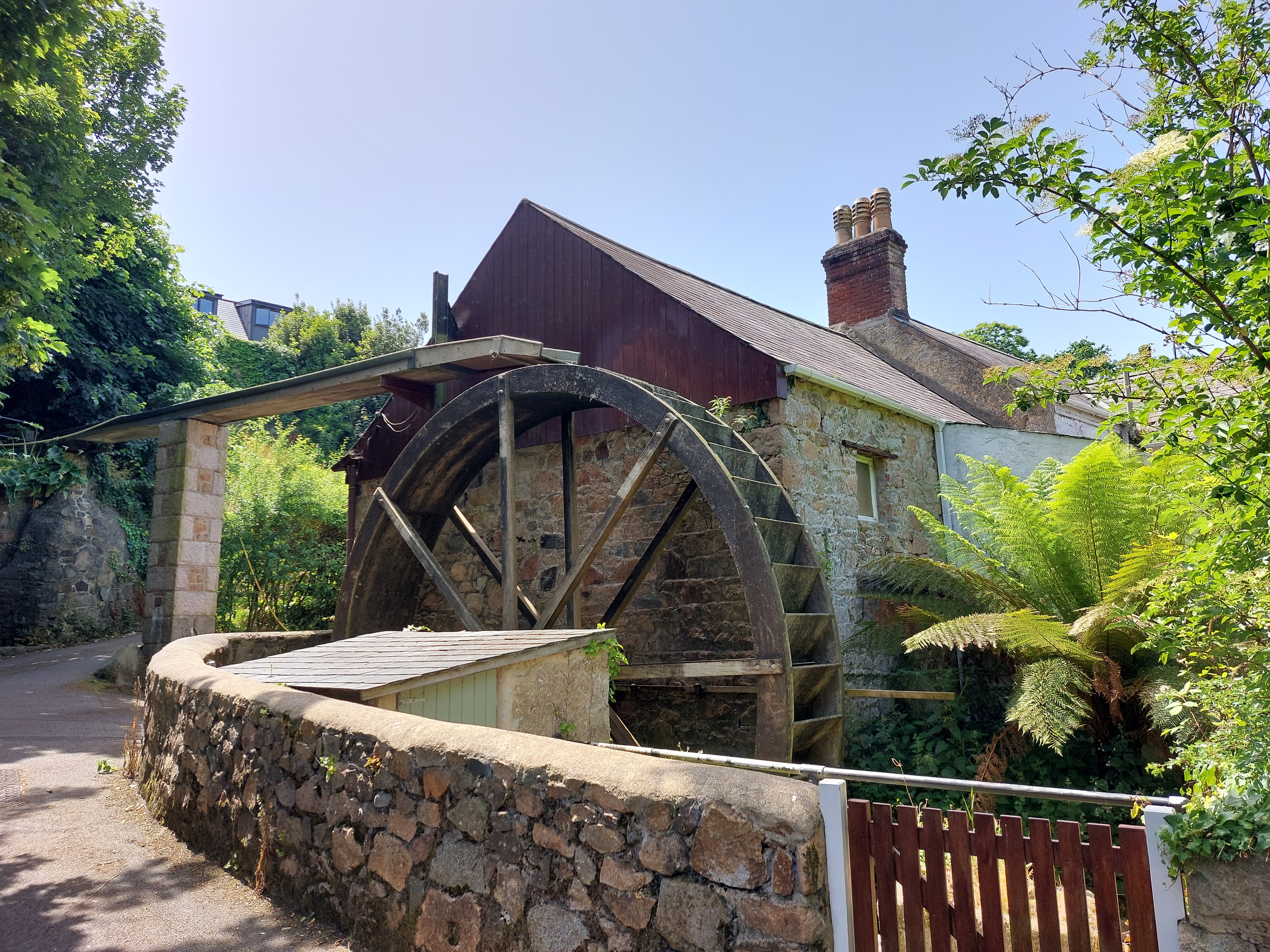 Here’s a hidden gem I found along one of the smaller side roads on the way to the chapel. It’s not still working but it does look cool. 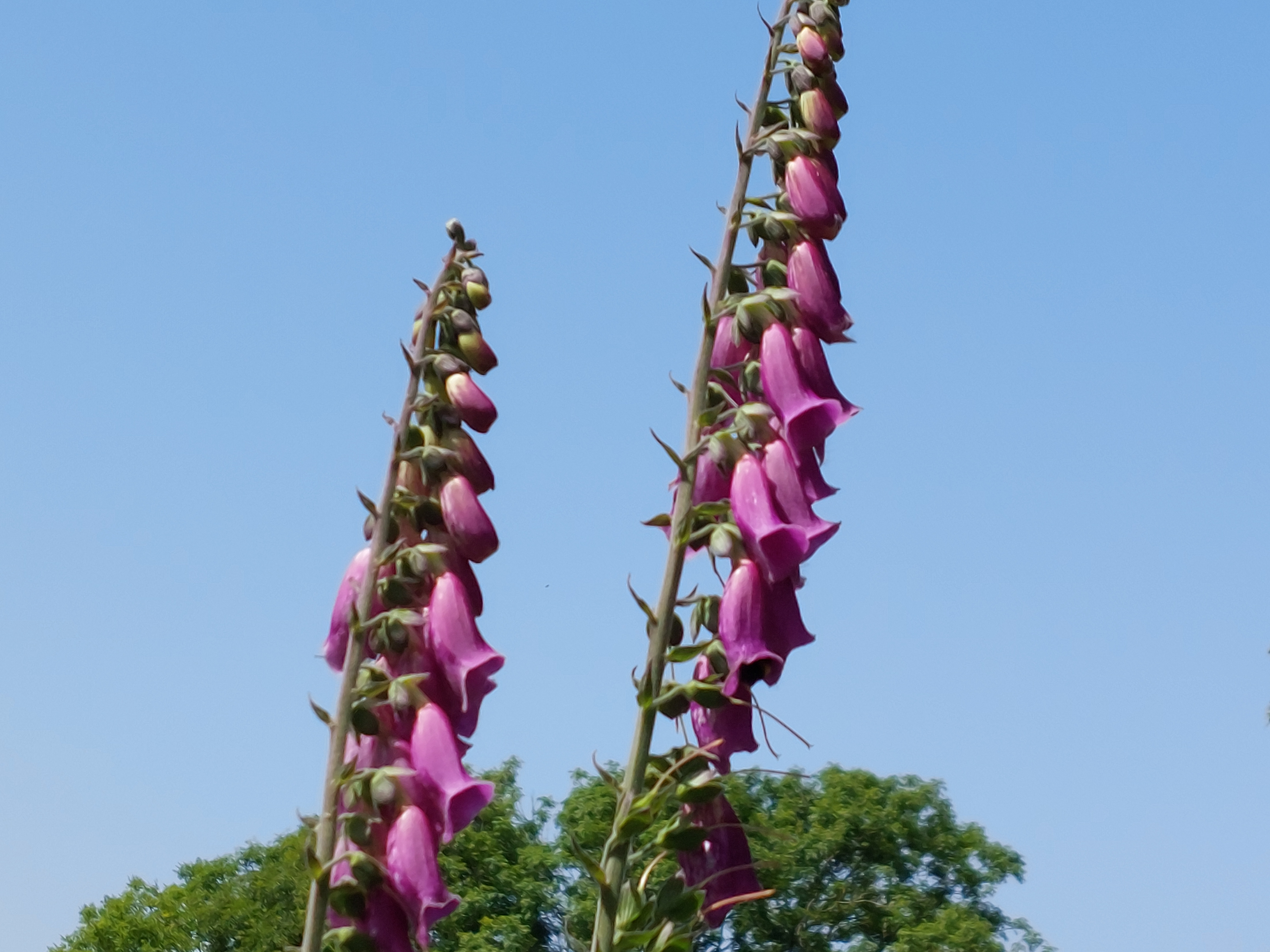 With such great weather, all the flowers were in bloom. As I stood here looking at this one, I could see bumblebees slipping inside each of these flowers. Not sure how those thing still fly while in there...maybe there’s a perch they can land on or something. 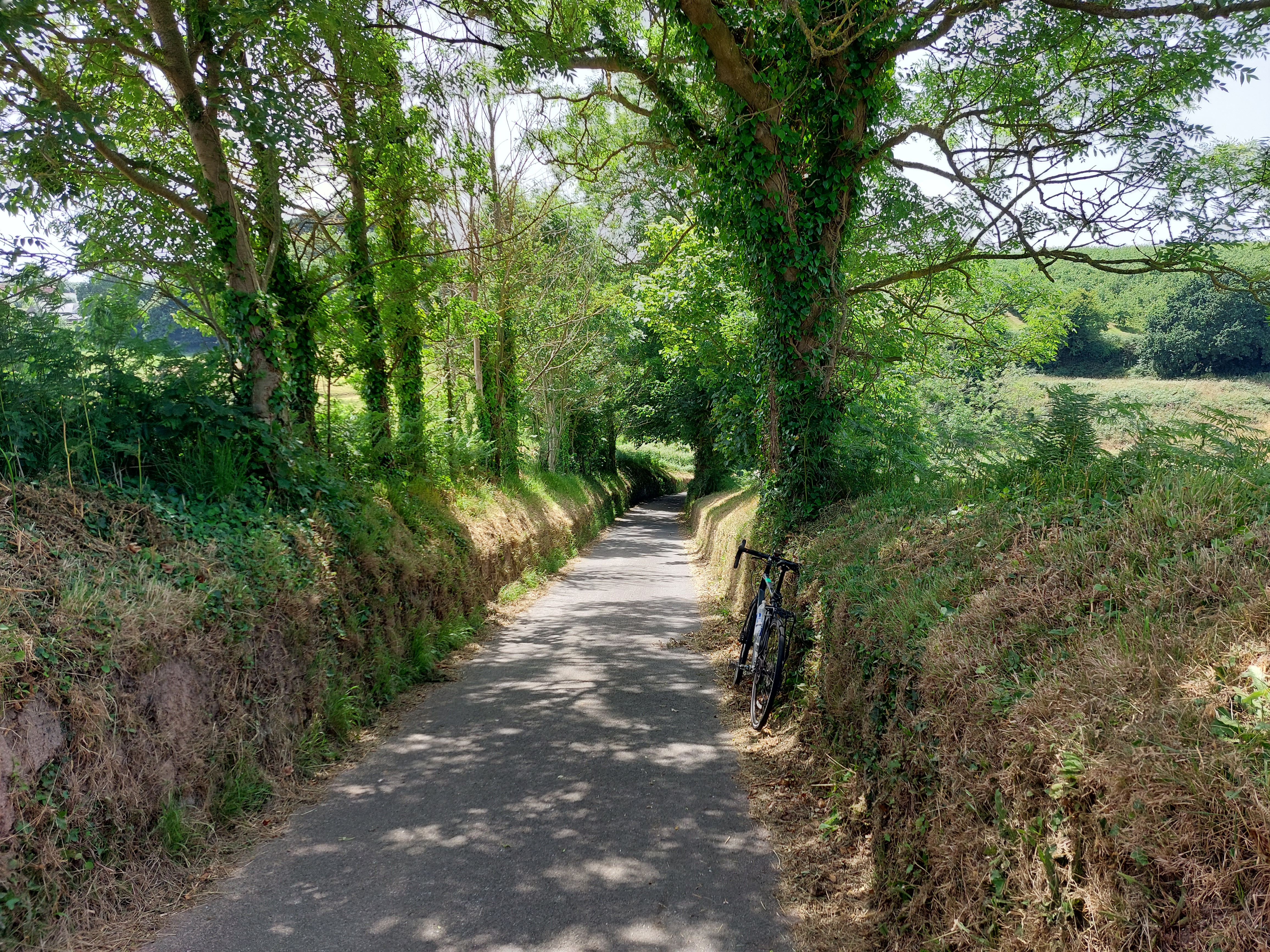 Another neat little road leading down a fairly steep hill (with a corresponding climb up on the other side). Notice how narrow it is...this is a two lane road. If two cars meet, one has to give way, somewhere. Luckily there wasn’t much traffic. 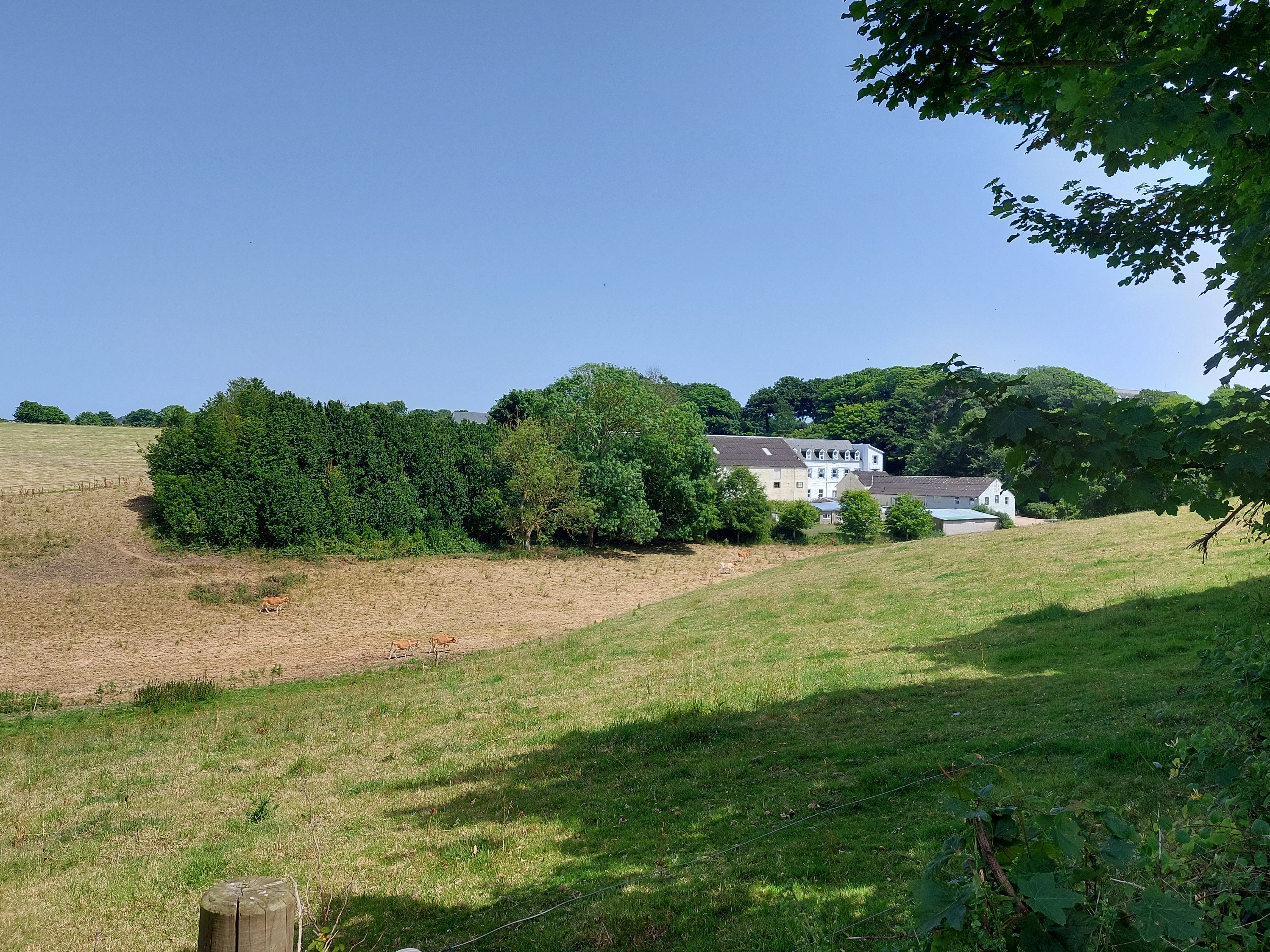 Lots of farming on Guernsey...here’s a typical scene. 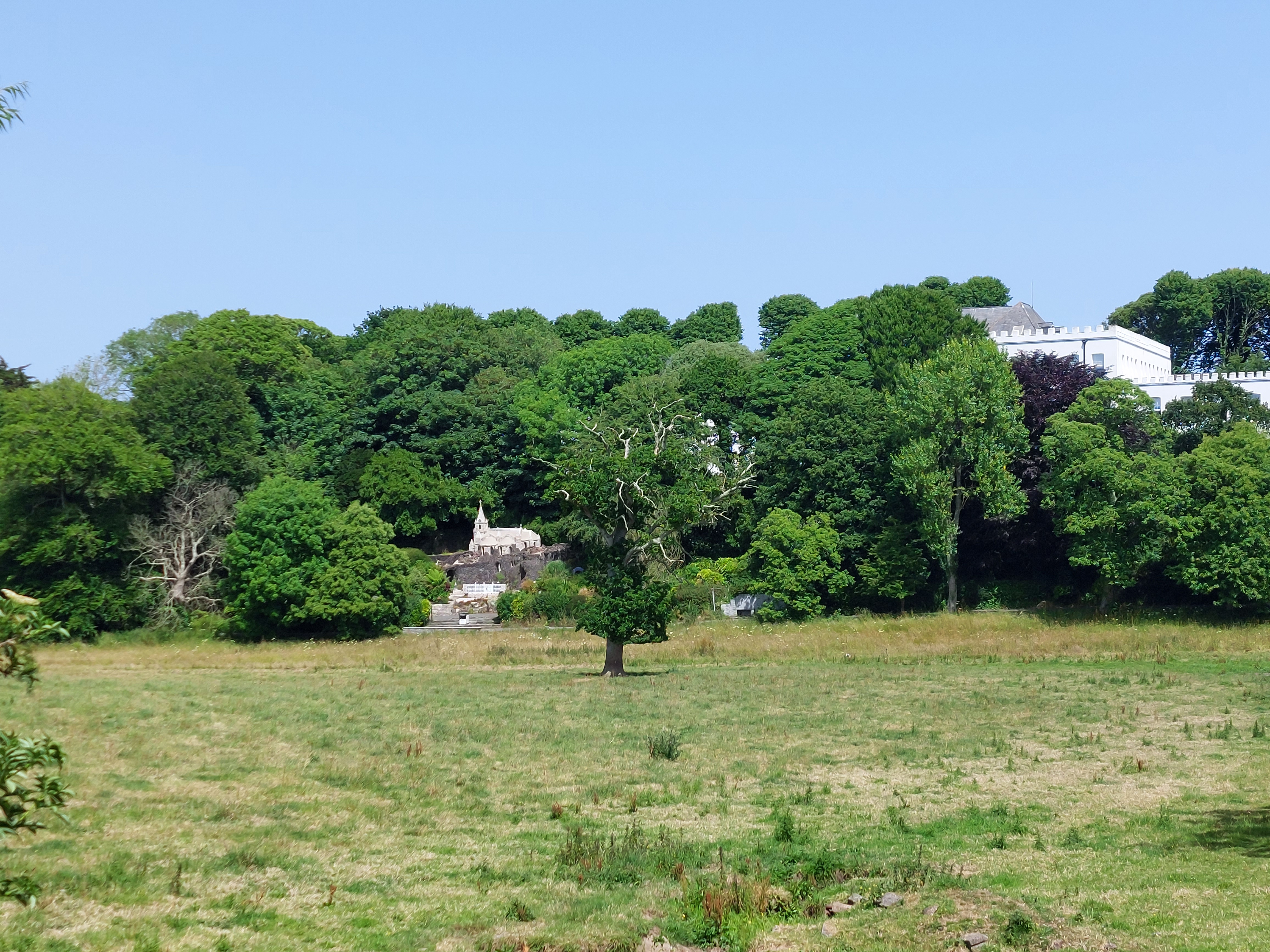 First look at the Little Chapel. Wow, it is little, isn’t it? 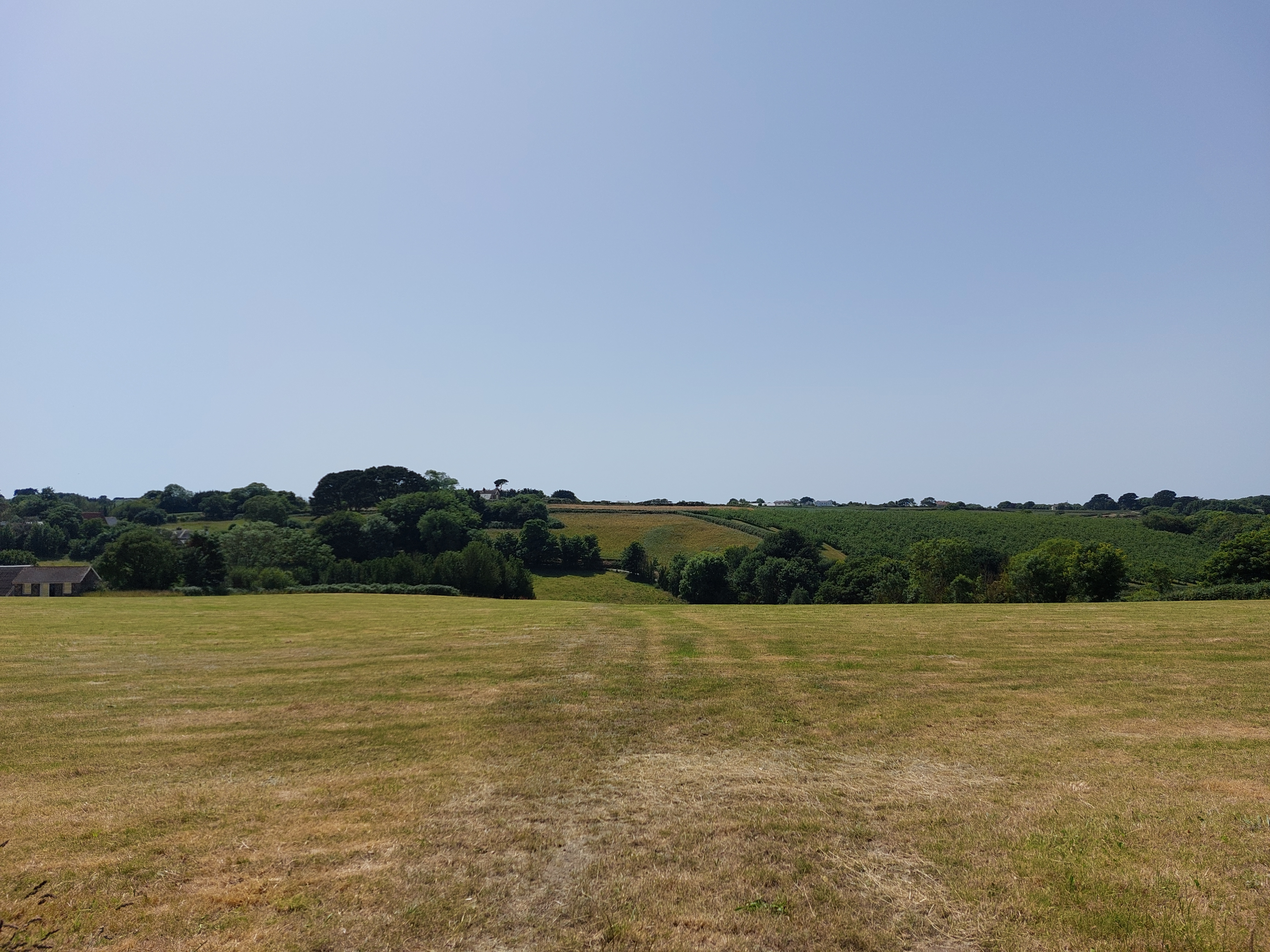 Before I get to that, though, one last look at the pastoral beauty of Guernsey’s farm country. 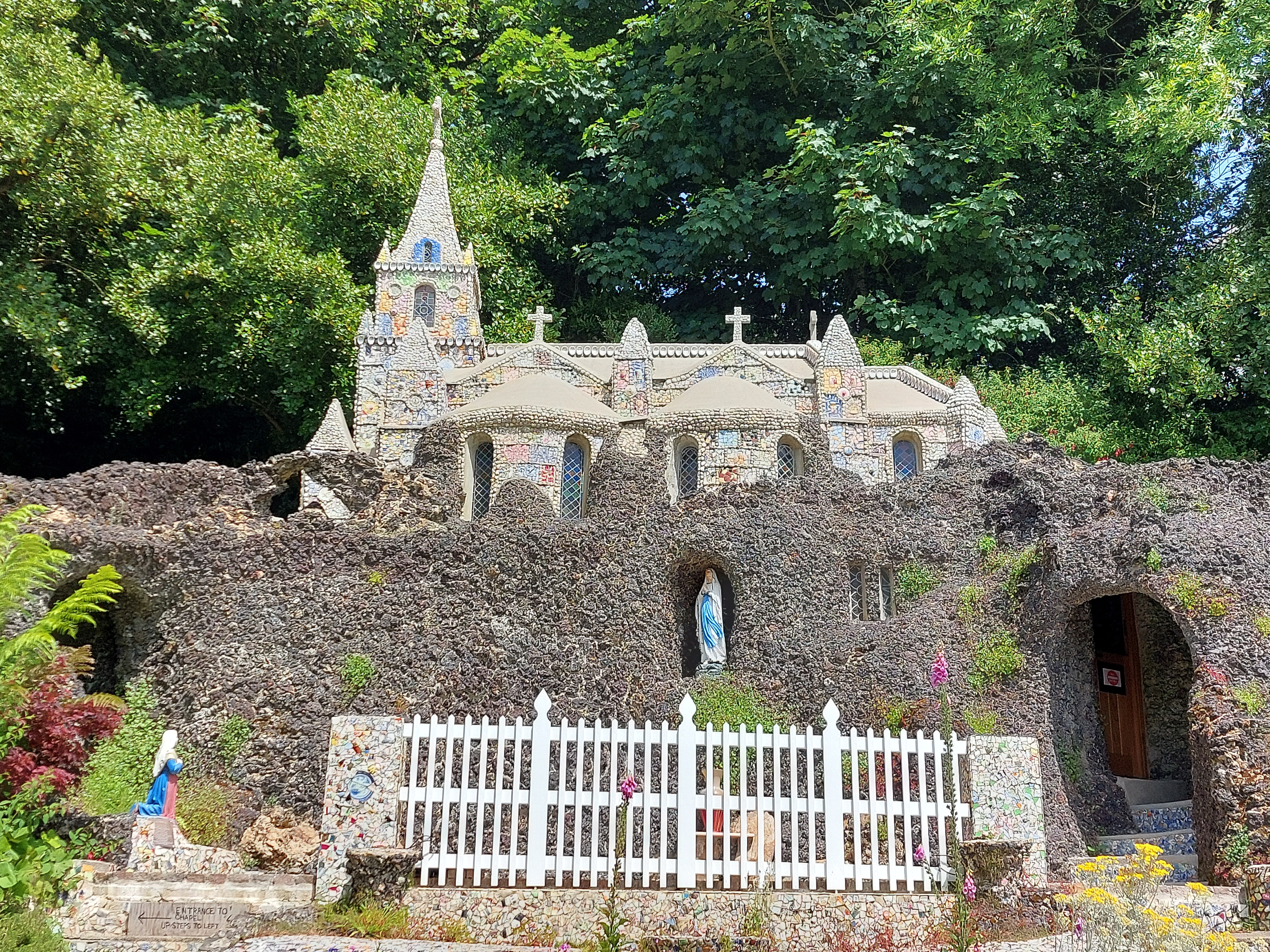 Now here’s a better view of the chapel. Luckily for me, nobody was in the shot at the moment I took it, despite there being lots of people around. 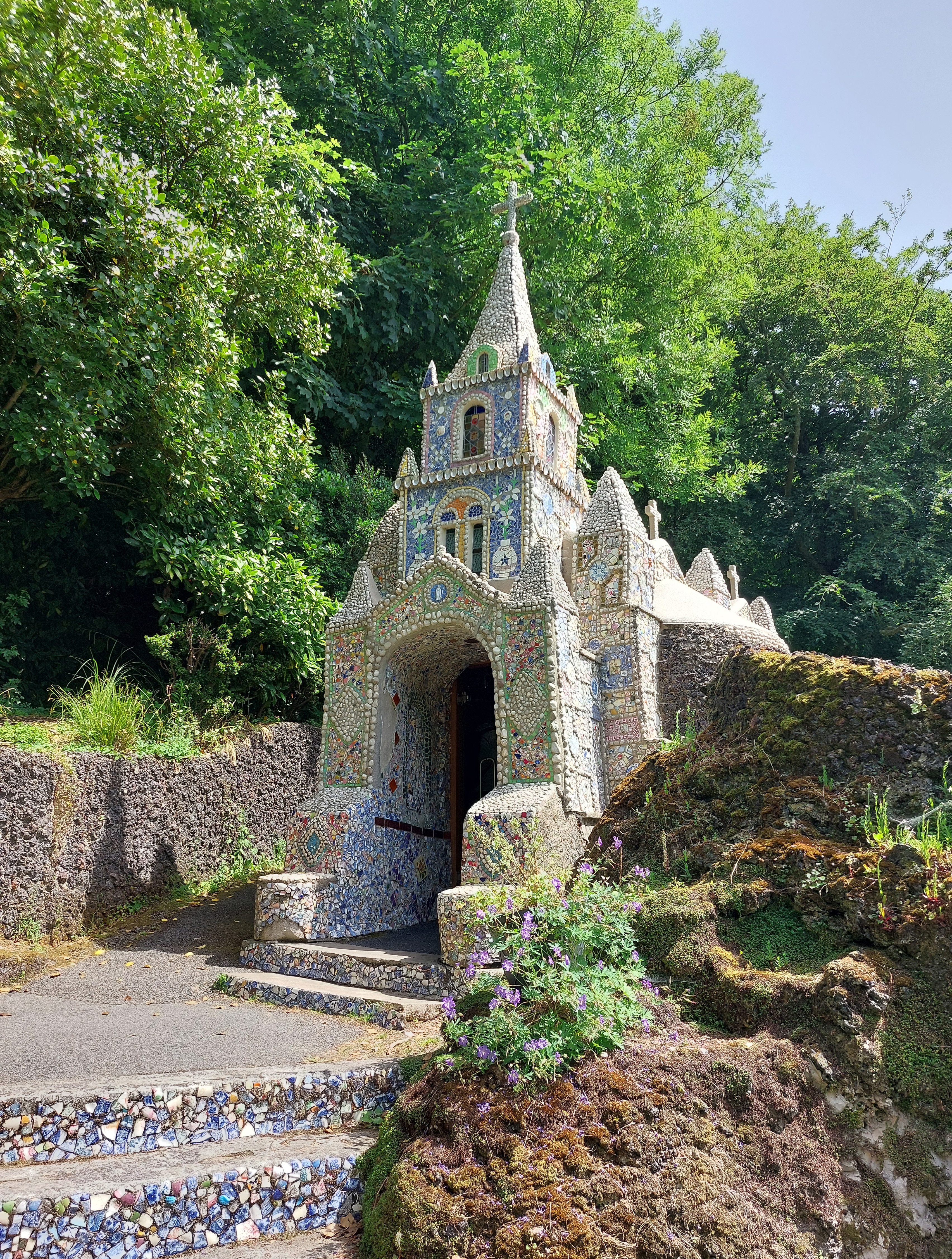 Even the facings of the steps are decorated! Just remember, this whole thing was built by one guy, by hand. 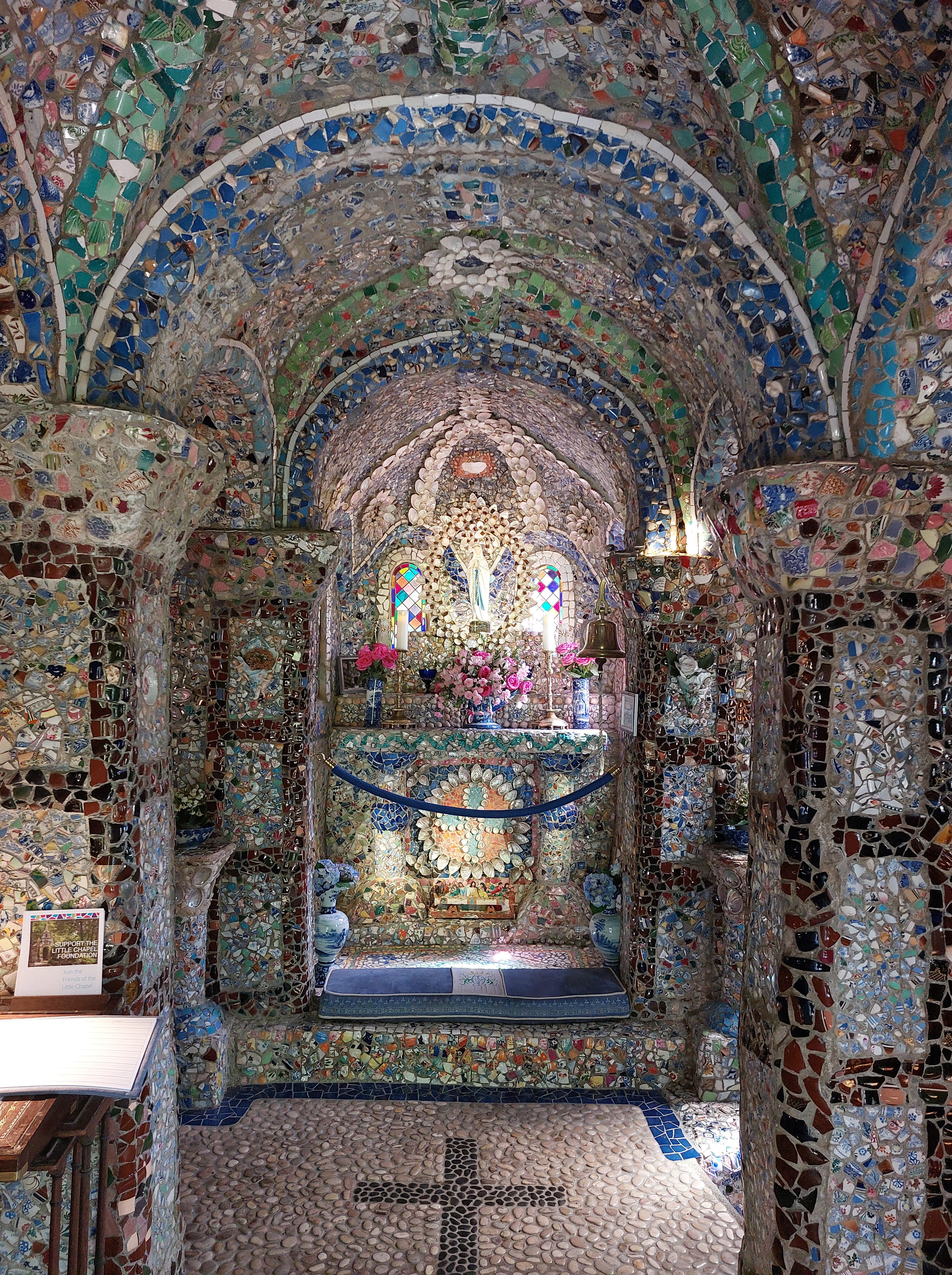 A look inside the front. This area was only big enough for about 3 people. There are stairs down to the right so once the two in front of me left, I got this picture. I was told by the tour guide that they do have services here occasionally, although I’m not sure how. 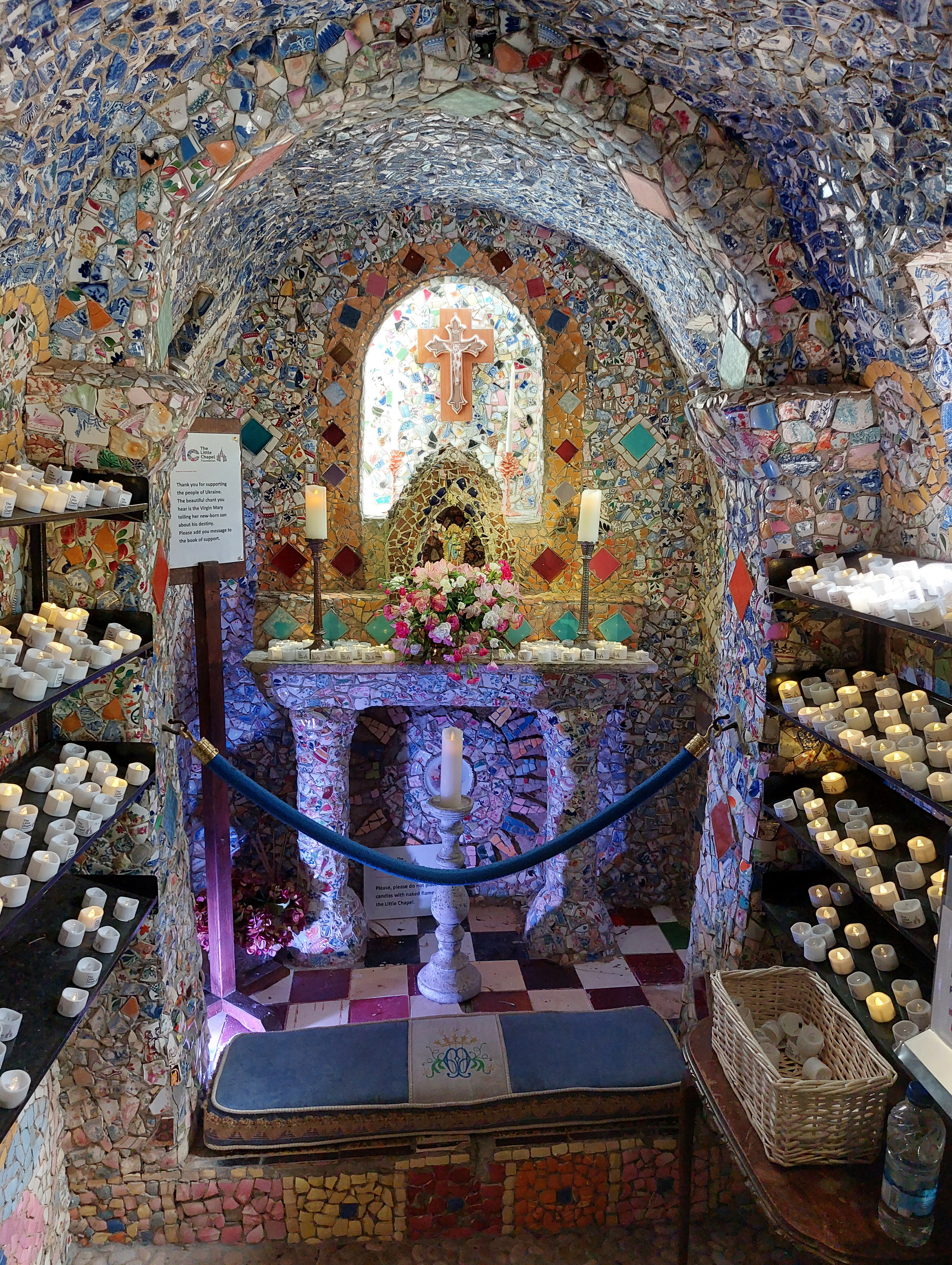 Another very small place in the church where you could theoretically kneel for a prayer or two, if you were so inclined. 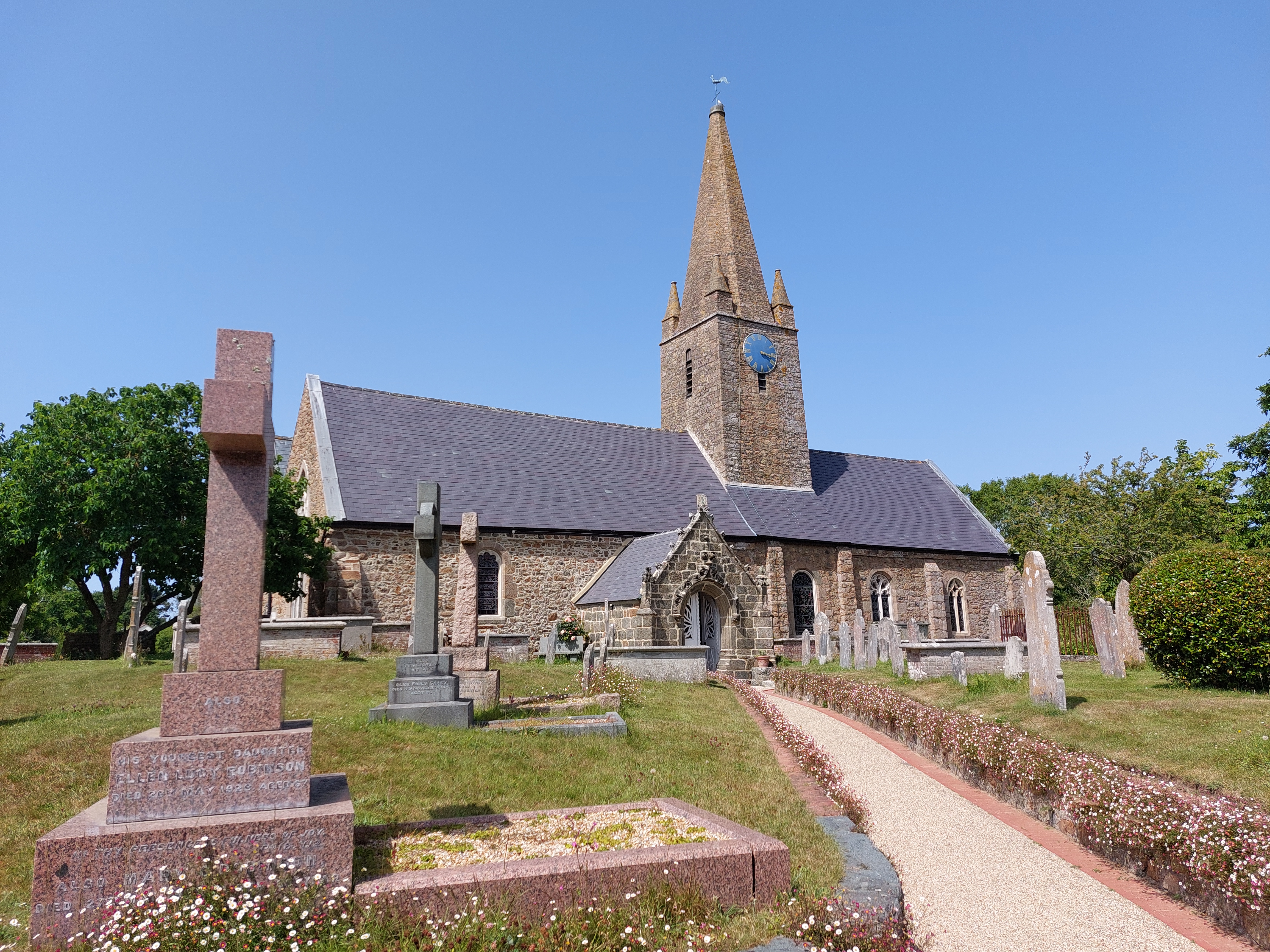 Well, that was nice and all, but after a bit I headed out and on the way back to camp passed another really nice church that was more appropriately sized. 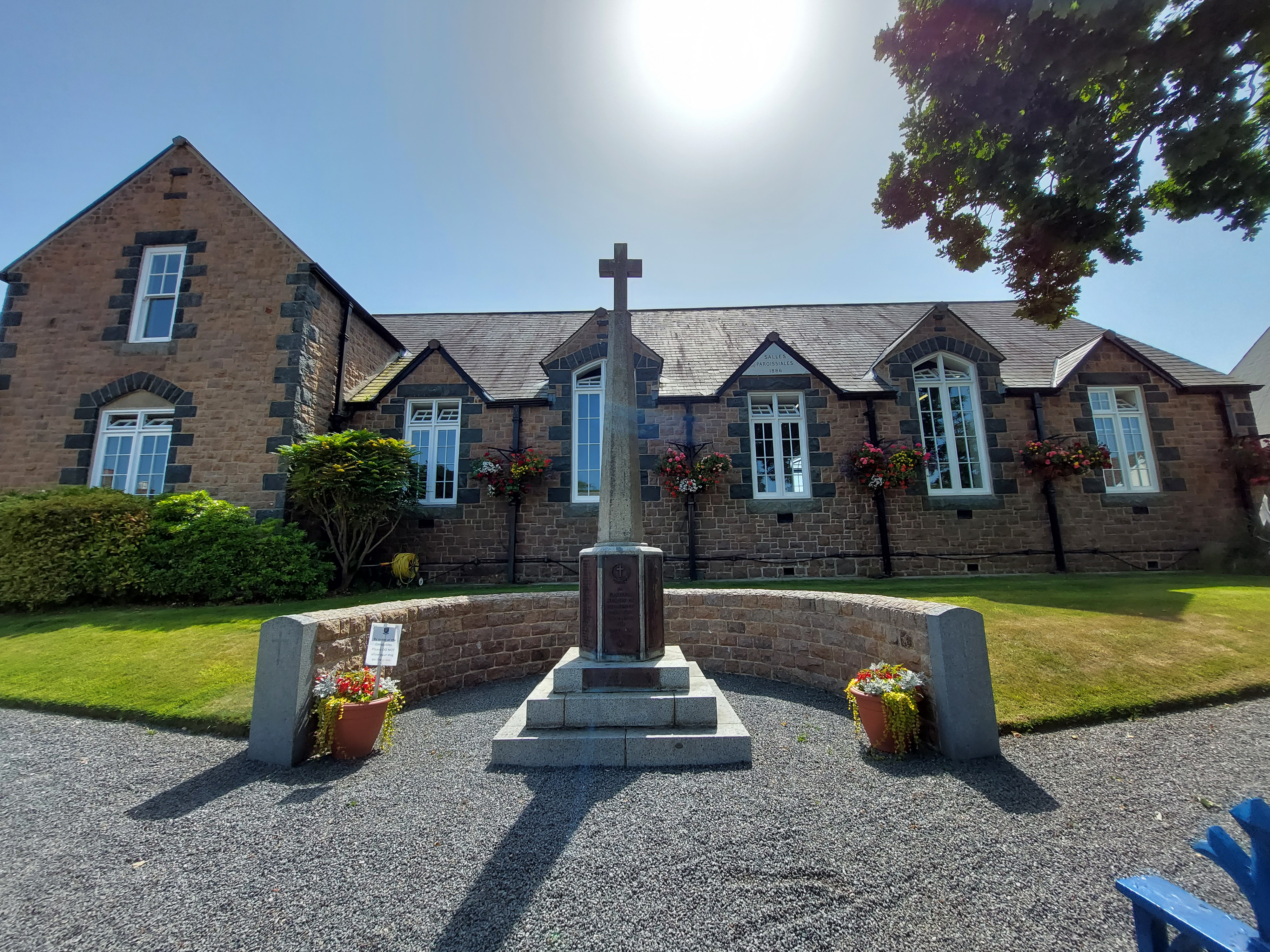 Here’s another neat building, but it’s not a church, it’s a town hall. 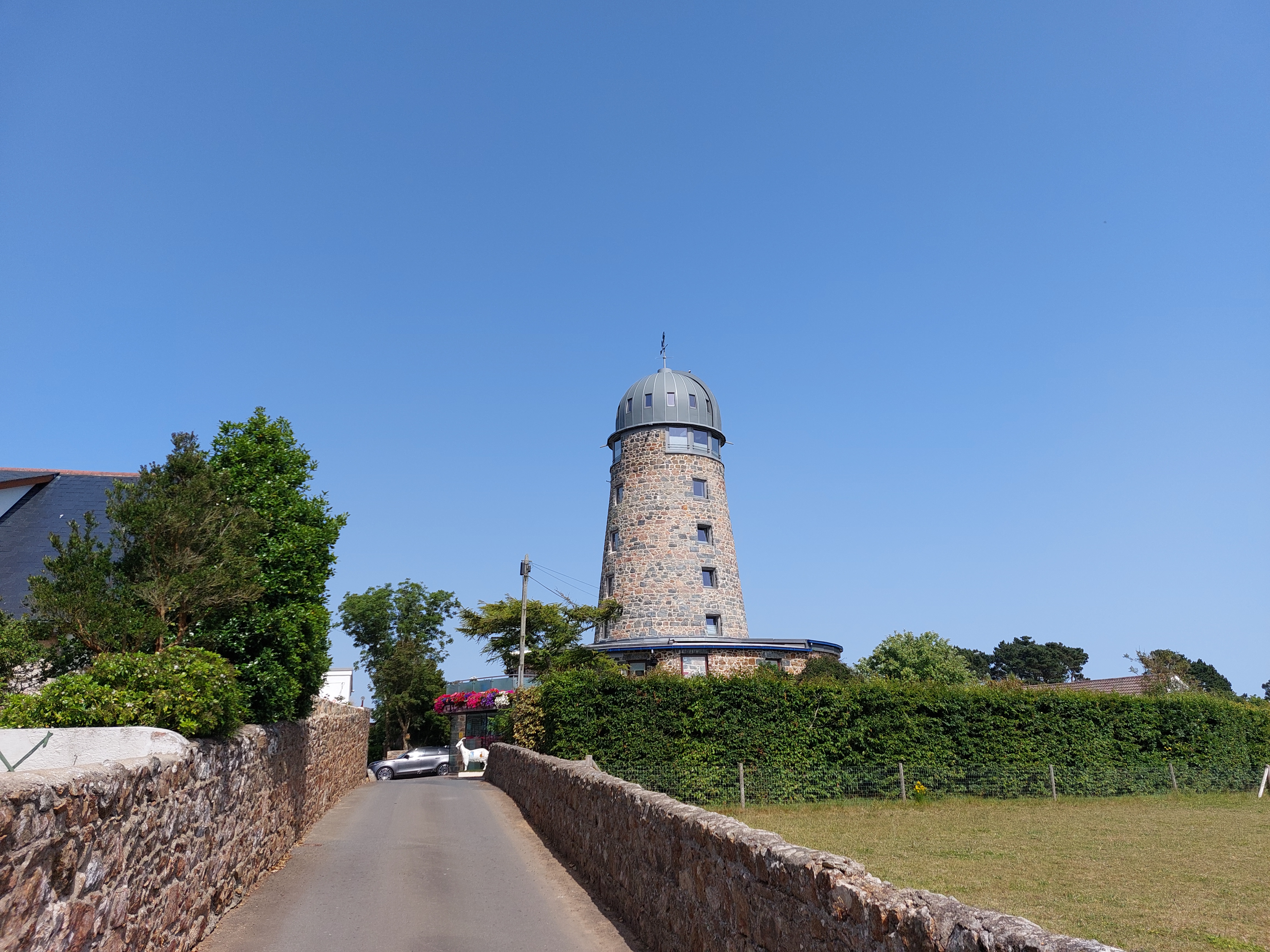 One last cool place on the island, an old observation tower that’s been converted into a restaurant. 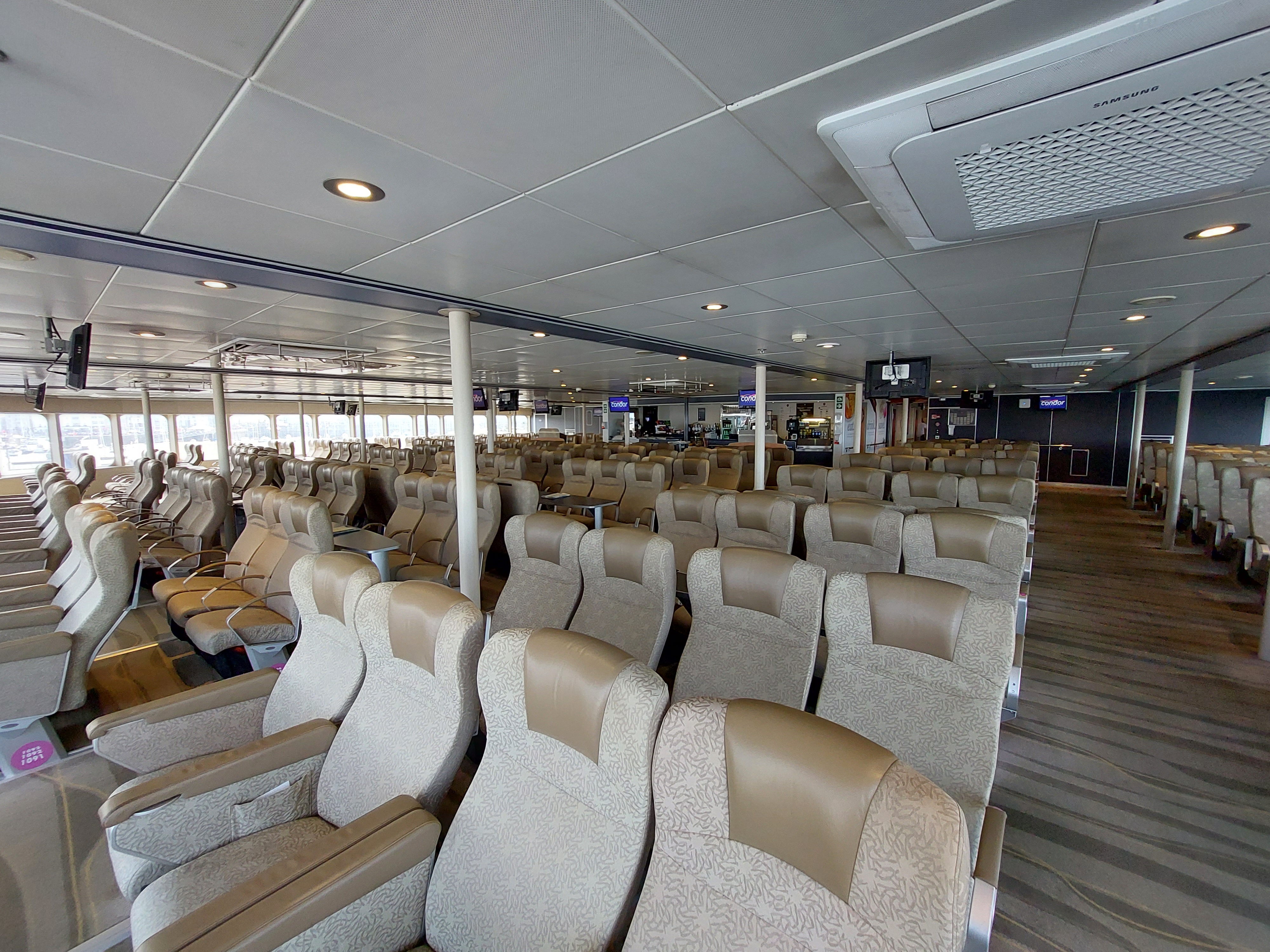 After all the waiting around for the ferry that I described previously, I finally was able to get on. They let the few cyclists in line on first so I had just enough time to get a photo of the main seating area before the hordes began arriving. Looks sort of like airplane seats, only they’re much more comfortable and wider and...get this...you actually have leg room! (gasp) 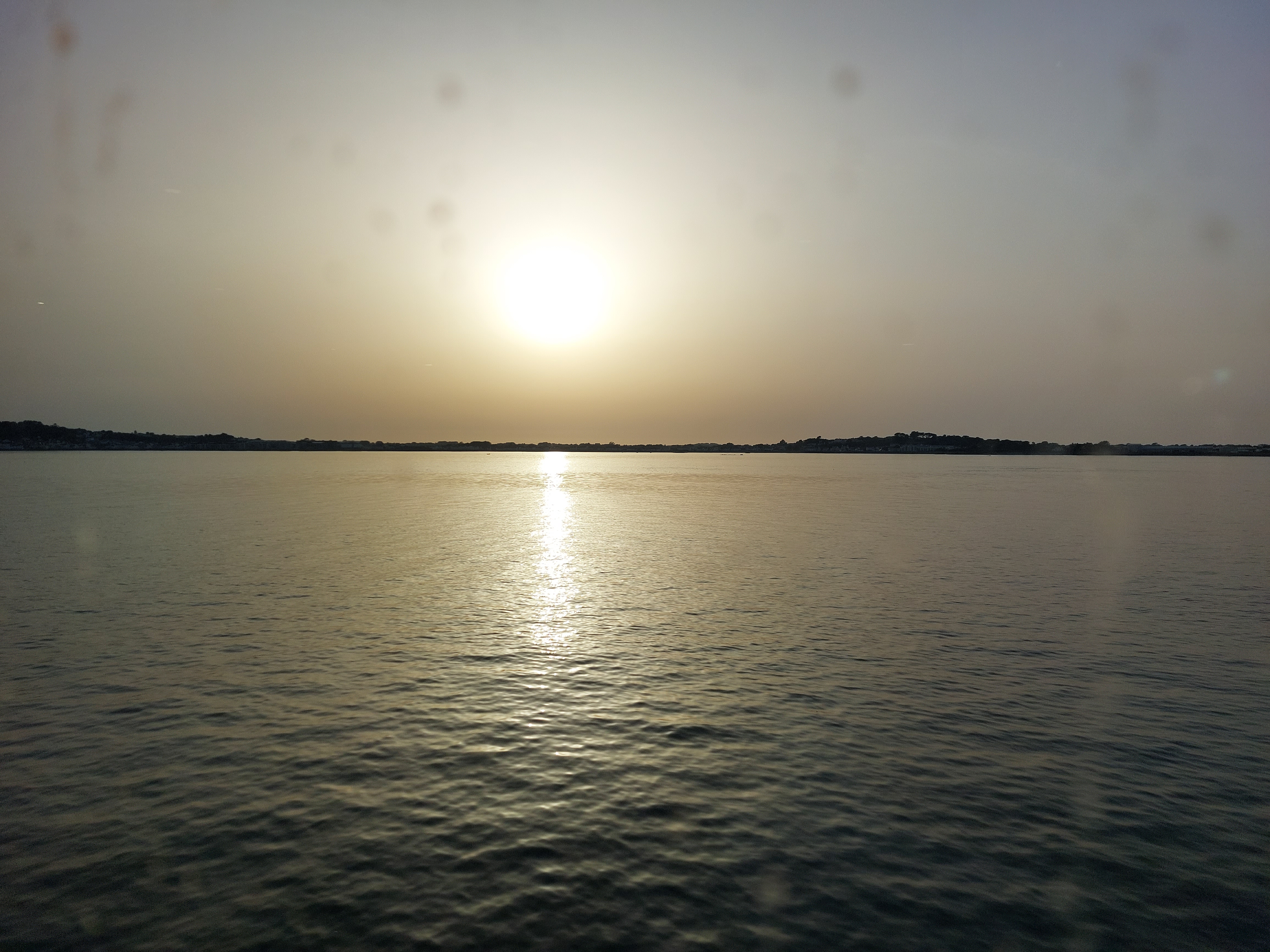 Time to say goodbye to the channel islands. Bye, Guernsey! I had a fun time and would love to come back some day. 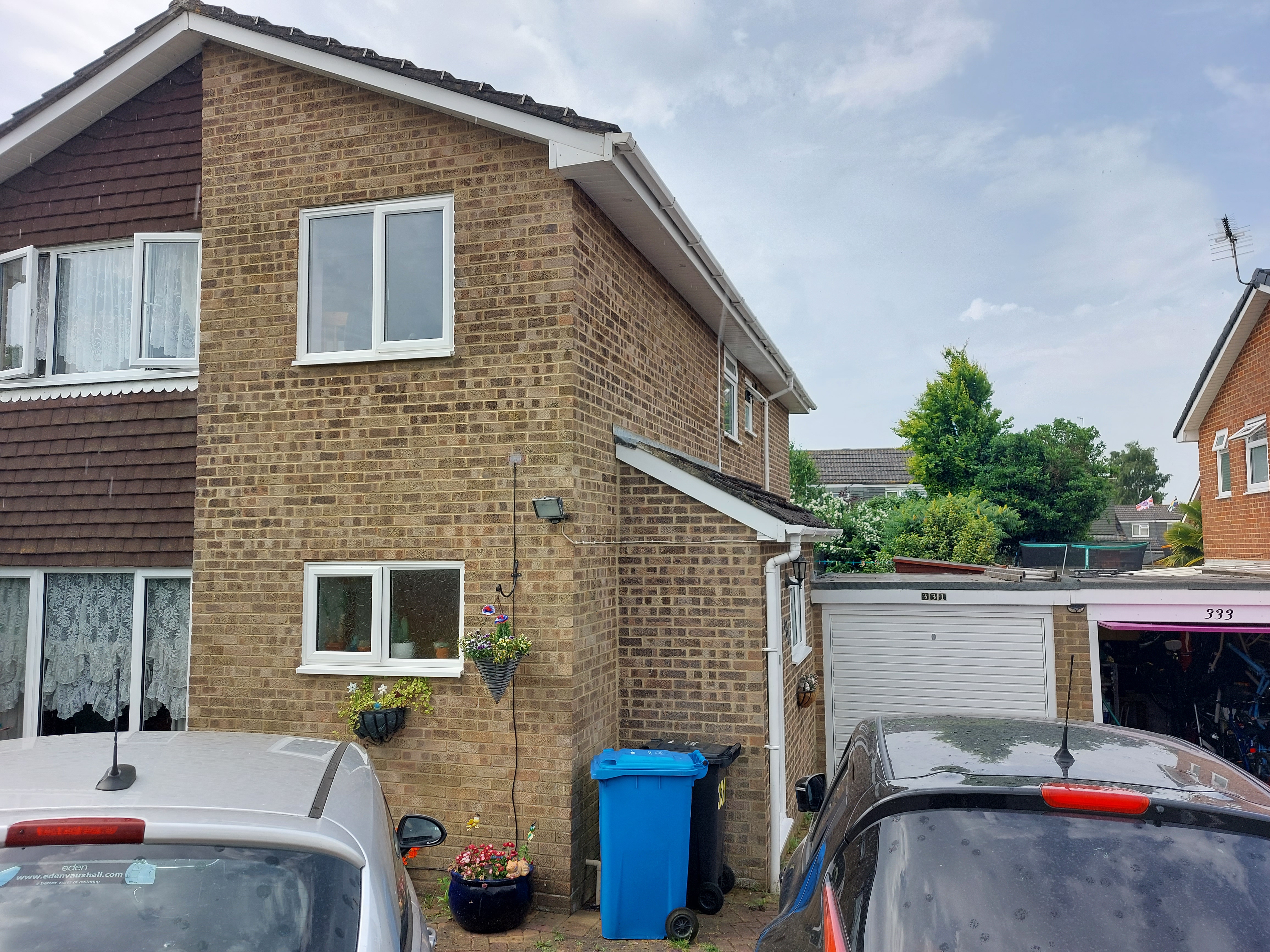 So this is where I wound up staying tonight. See that closed garage door there on the right (next to the open one)? Yep, I stayed in there. Of course I took this picture the following morning because when I got here it was like 11:30pm and totally dark. I’m really lucky that guy heard me knocking and let me in or I would’ve had a rough night. 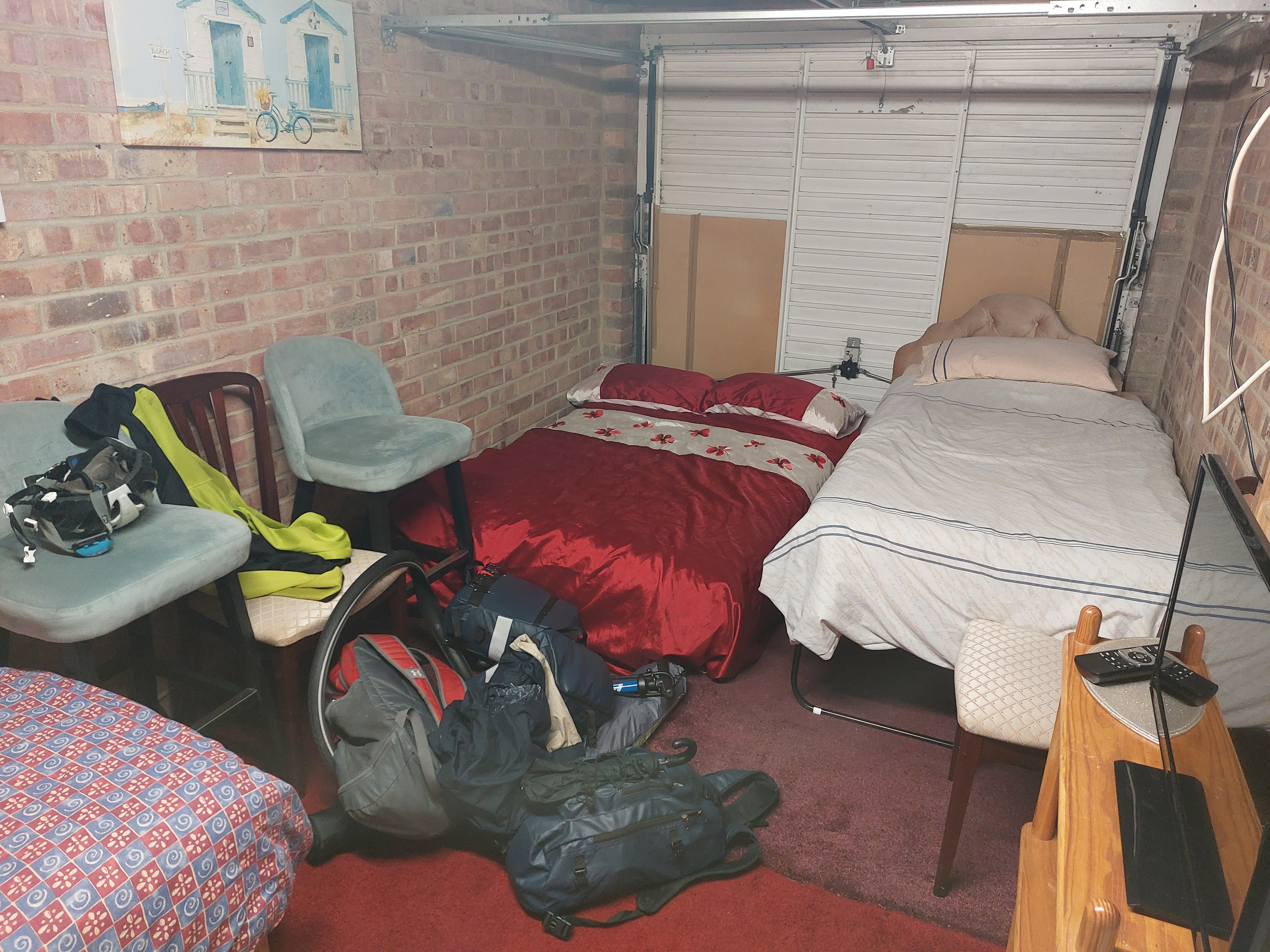 As it was, this is what the place looked like inside. The garage door no longer opens although you can see it in the back there. The owner of the house basically furnished her garage and rents it out to groups of up to four people. It looks pretty cheesy, I know, but it had everything I needed, including power outlets to recharge everything, as well as free wi-fi (I got Day 7’s post done, planned my route, and reserved my next stay, all the following morning before setting out. Honestly this place was so comfortable I slept way too late, but by the next night I’d be dreaming of a place like this! For more on that story, continue to Day 9...