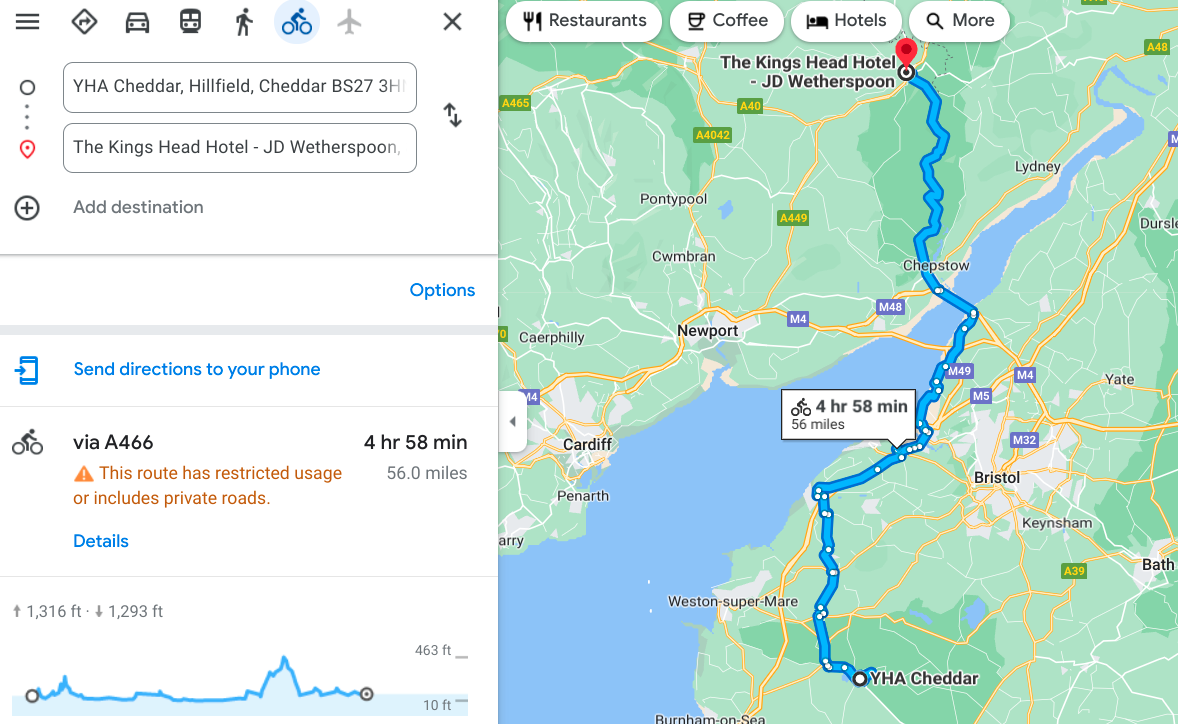 Cheddar-Monmouth, Wales
Miles: 59
Terrain: A few tough climbs but not too bad
Weather: Warm and pleasant, no significant wind

Last night’s hostel (only the second one this trip) at least gave me a solo room, with nobody else to share it with, but the bunk bed was so tiny I barely fit, and I kept banging my arms and legs into the metal framework around it all night. So I didn’t get a great night’s sleep, and wound up staying in bed way too long. In fact, I didn’t get out of the place until just after 10 and by the time I got lunch and got on the road it was nearly 11. Luckily my trip didn’t have too many hills today, and the target hotel had check-in until midnight, or I could’ve been in trouble. As it was I got there just after 8pm. I know, I’m incredibly slow on my overloaded bike, aren’t I? But at least the hills weren’t too tough today and the weather was just about perfect.

The ride took me north along another of those National Cycle Routes, mostly taking me through farm country with not a lot to see. Eventually I got to the water, but then I got onto surface roads that were crawling with trucks as I went through a very busy port area. If you look on the map, you can see a pretty major bridge crossing as well. When I got there, I found that the cycle path (Route 4) was closed for construction, which left me more than a bit worried because if I had to go around the long way to my hotel, I wouldn’t make it. Luckily, though, there is a second pedestrian walkway on the opposite side, so I followed some detour signs and eventually figured out how to get across.

The bridge took me into Wales, my first time in this particular region of the UK, and the route then followed a river as it meandered north through some really pleasant and pretty scenery. By the time I got to my destination, though, I was pretty tired. I should sleep well tonight as the bed here is much nicer. This particular hotel is actually part of an adjacent pub so I was actually able to get ice (my first time having ice since I was on the plane almost two weeks ago...I can’t remember ever going this long without ice before). Nothing like a nice ice-cold soft drink to chase down your dinner.

Speaking of which, I mentioned yesterday that cheddar cheese here in the UK is not the same as back in the USA, so my first picture of the day will show you what I mean...of course I had to buy some for my meals today, seeing as I spent the night in Cheddar, after all. 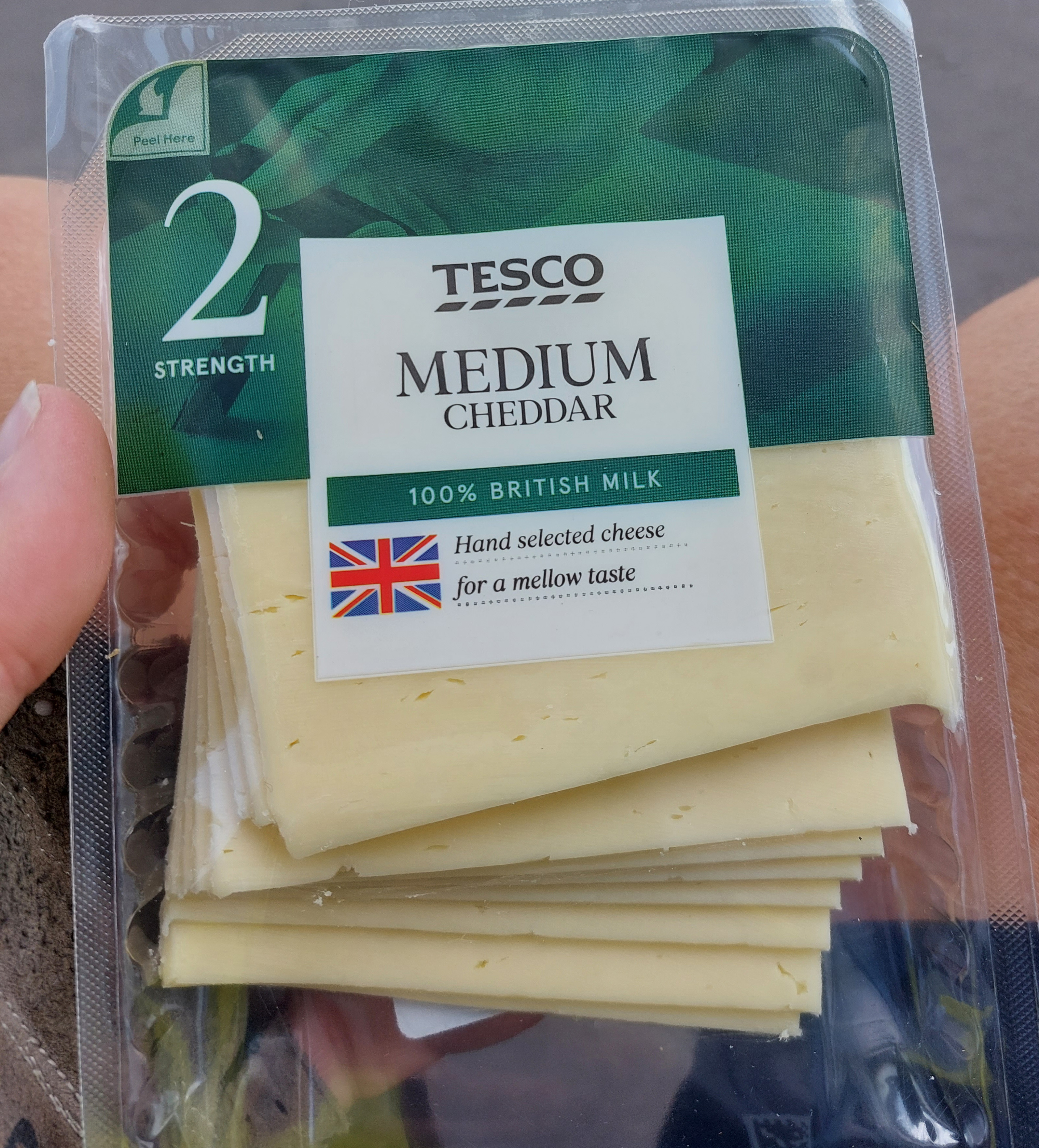 So here’s some of those cheddar cheese slices I was telling you about. They look more like provolone, or Swiss without the holes, but they taste fairly similar...a bit more tangy than provolone, that’s for sure. 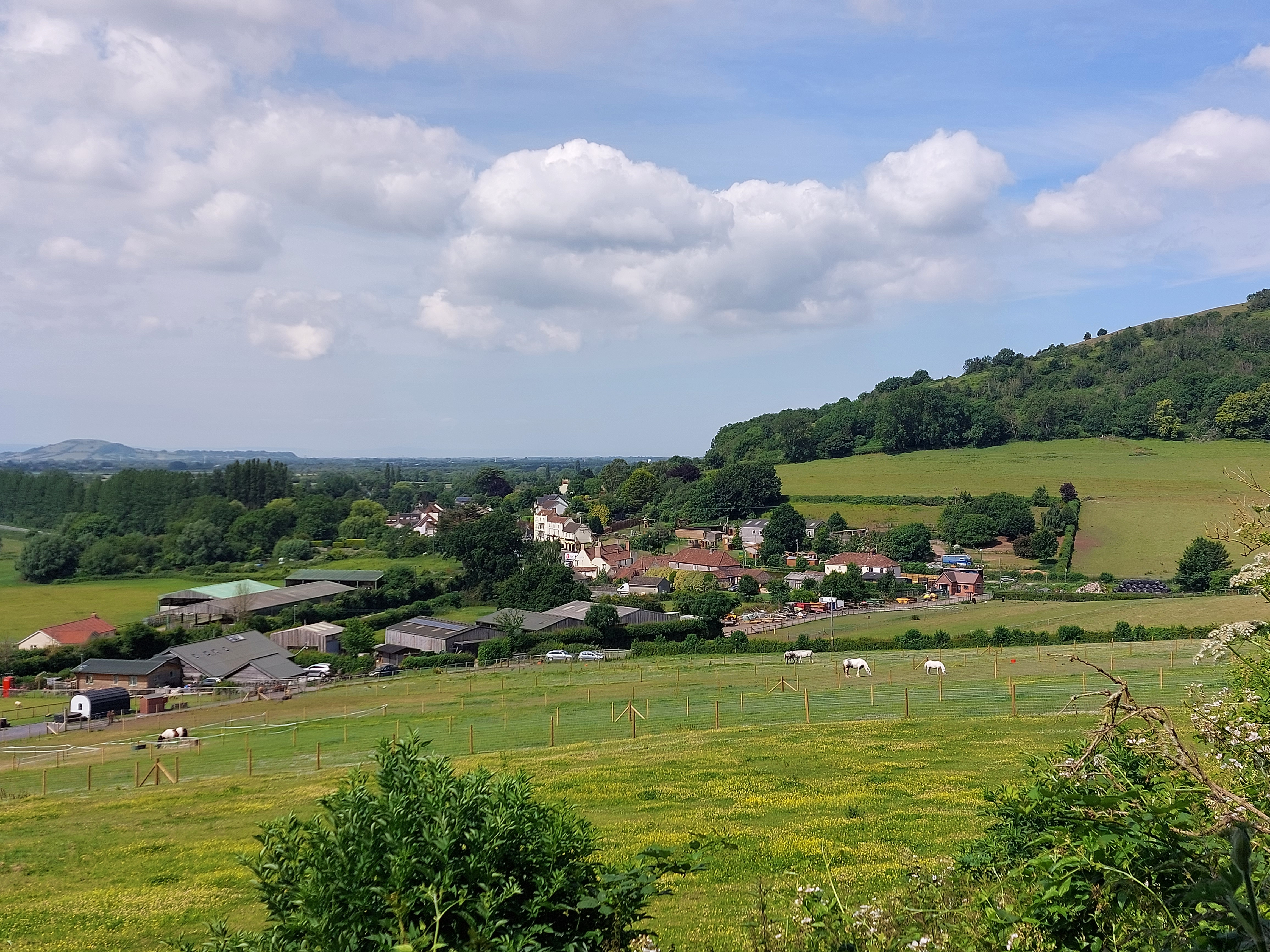 Another great pastoral scene in western England. As you can see, I was in for some nice weather again today. 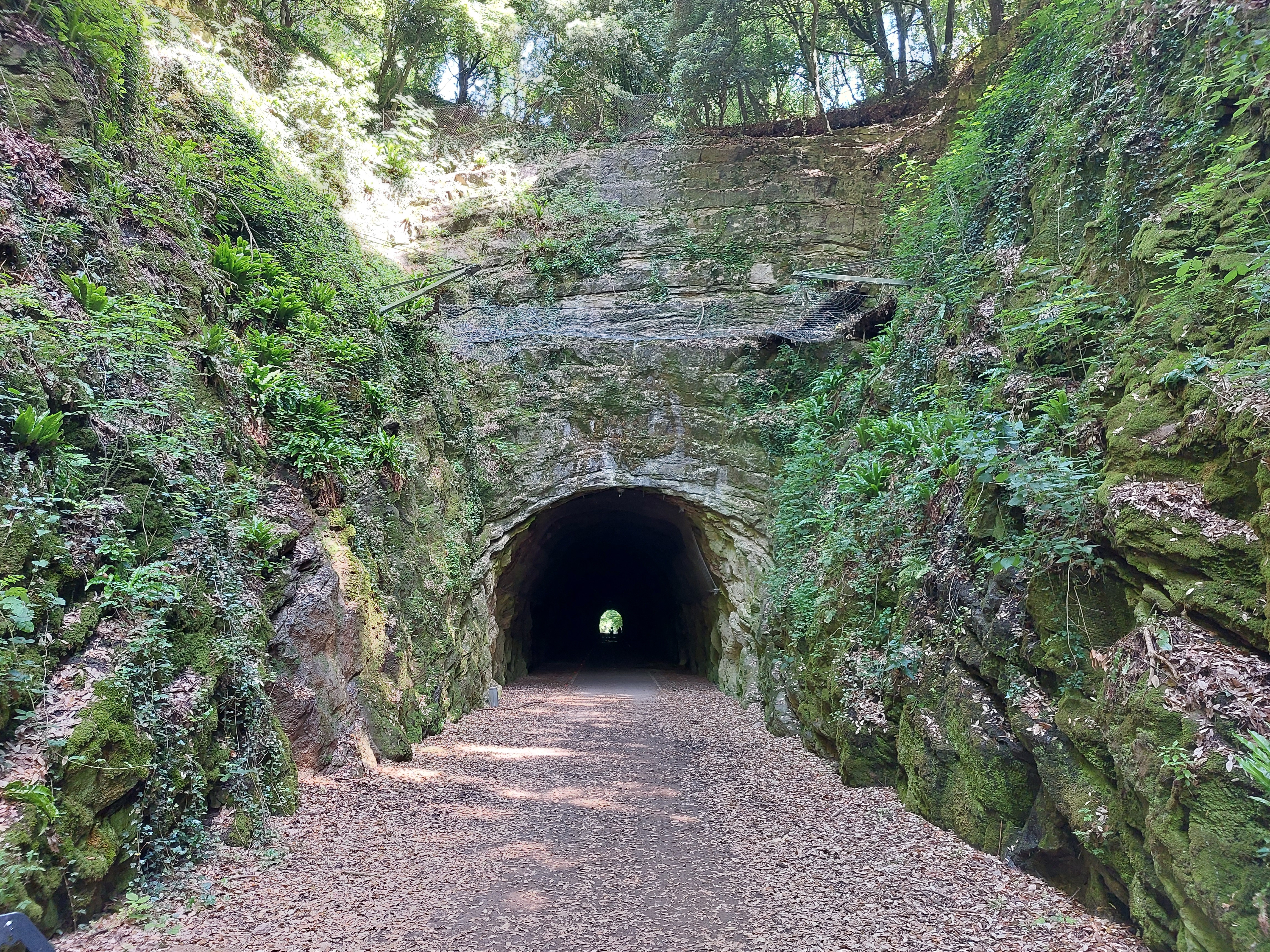 Part of the first section of ride today was on the “Strawberry Line,” an old rail line now converted to crushed-gravel path. The surface wasn’t too bad and it did take me through this scary tunnel. I was on the SL for about 10 miles or so before breaking off to head northeast. 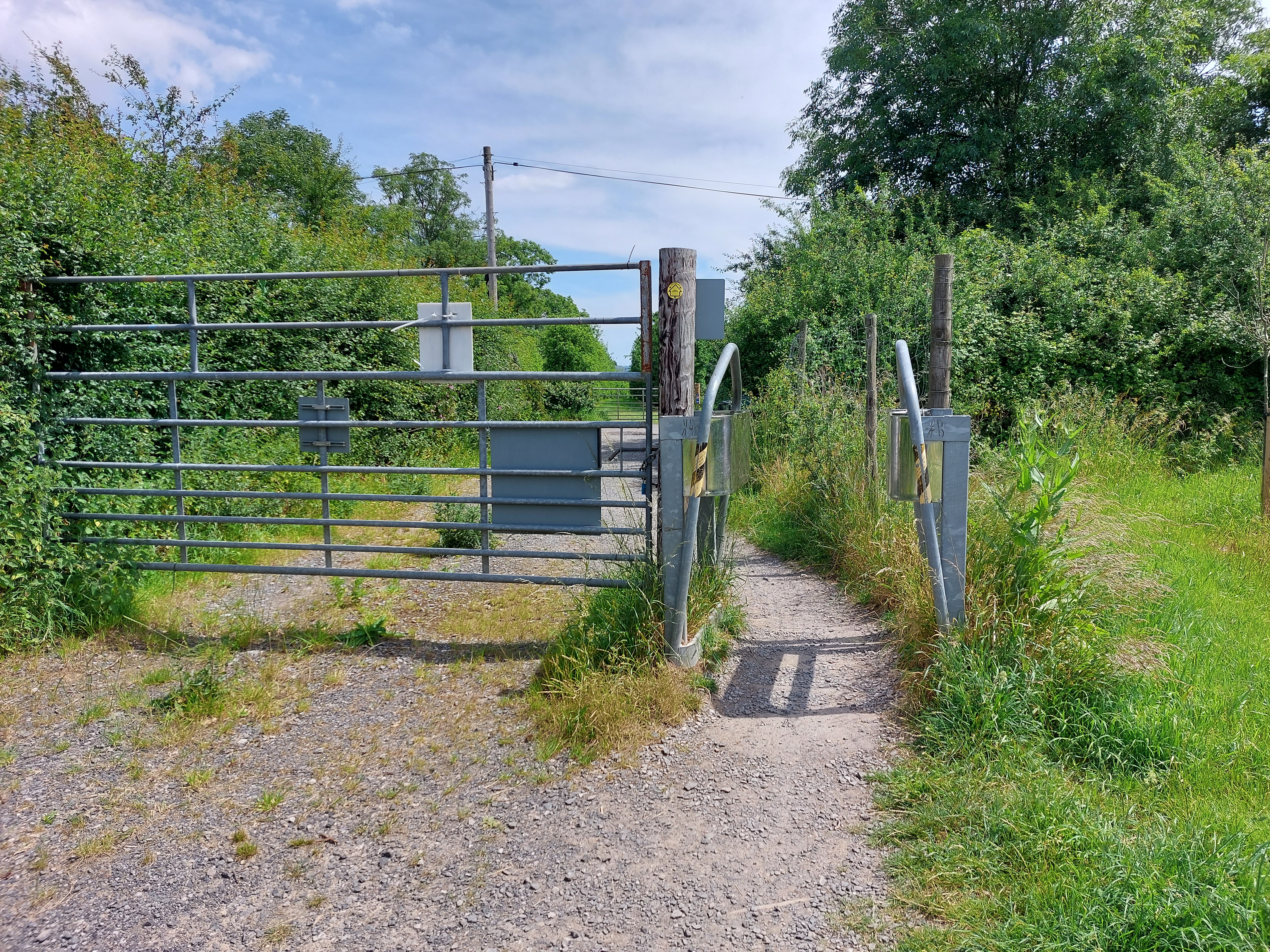 I found I didn’t mind the gravel too much as it was generally smooth, but what I really loathed were these gates that seemed to be every quarter mile or so. They have them placed there to keep the mopeds out, but they’re just too narrow for a guy on a bike carrying as much gear as I am. I had to stop and walk through every time because if I got caught on one it would mean another crash.

This is what the bike trail markers looked like today. Also National Route #26 (at least part of the way) and someone came along and added strawberry stickers to the signs. (It was called that because the railway used to pass through a bunch of strawberry fields). 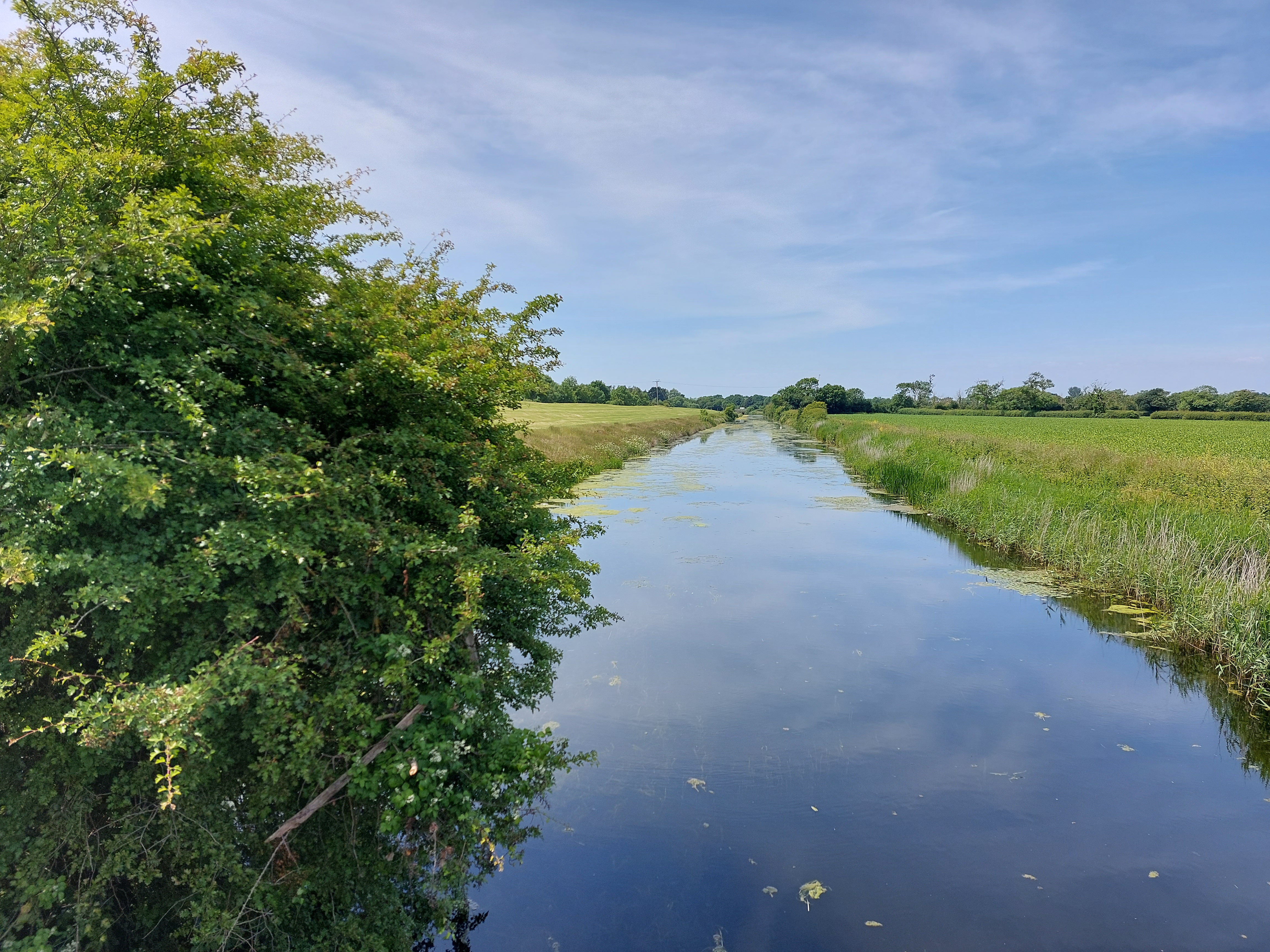 There are many canals in this area. Unlike yesterday, though, I didn’t see any canal boats today.

Here’s another classic view as I get close to the water. These views were surprisingly hard to find, mostly because I was riding through 10-foot bramble hedges most of the time. You can see the edge of a couple of them at the bottom of this shot (I held the camera over my head to take the photo). 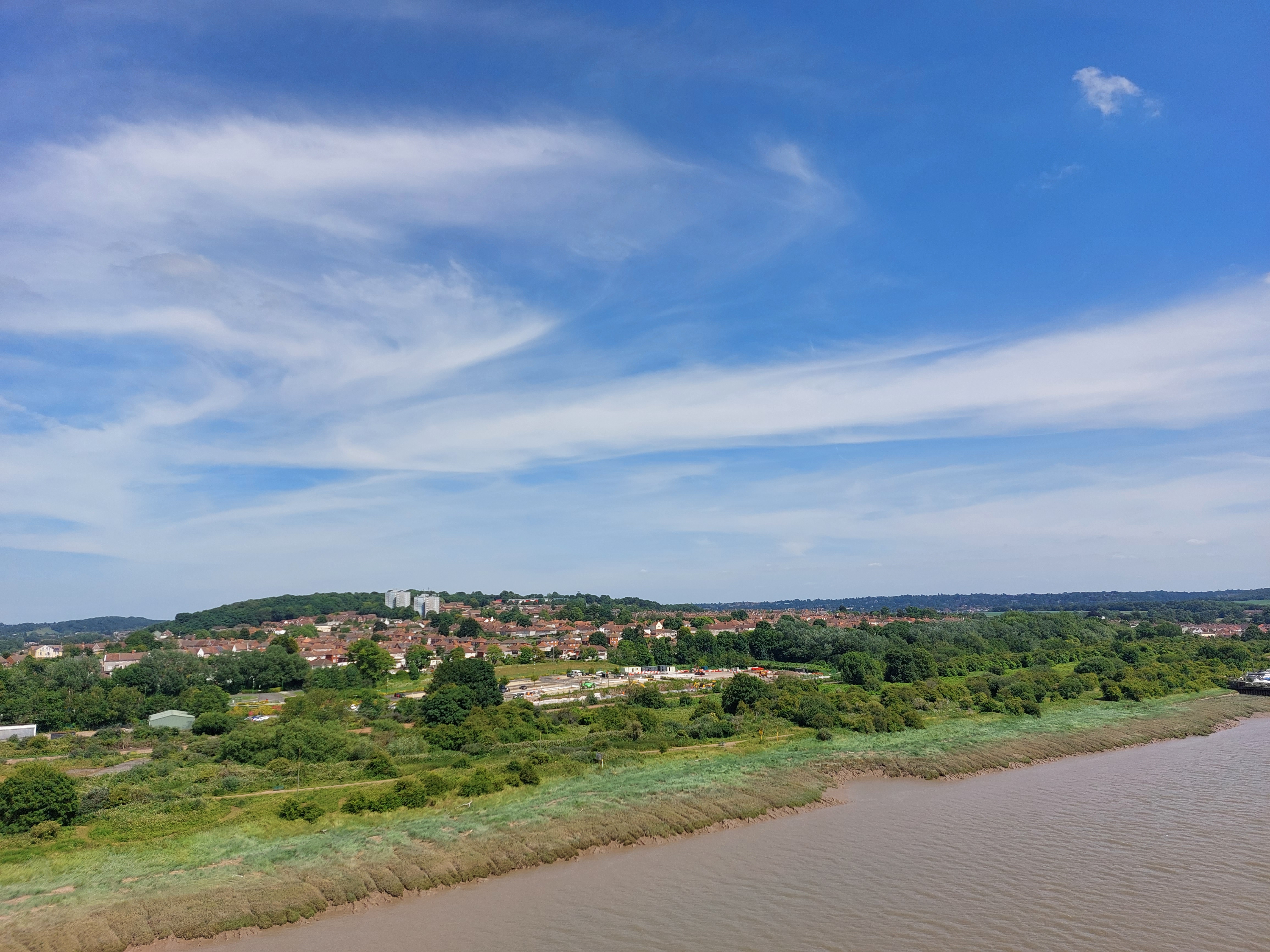 At one point before reaching the main bridge, I crossed another and thought I was entering Wales. Turns out it was just a small tributary, but I still got a couple of pictures out of it. 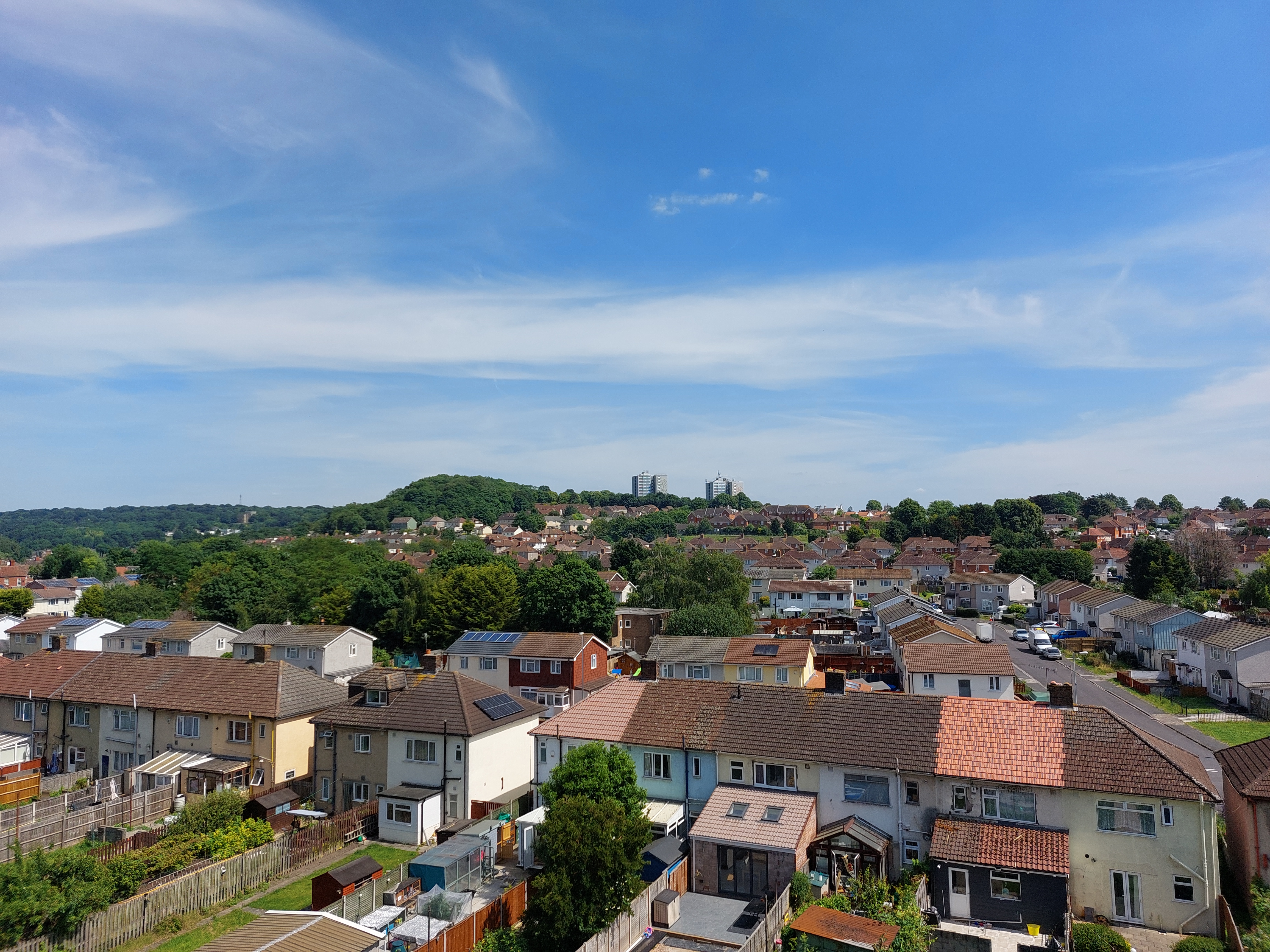 A view from atop the bridge, of the nearby town. I’m not sure I would want people being able to look straight down in my yard like that.

Okay, now here’s the real bridge. The path across was about 3 miles long. Luckily there wasn’t much wind and traffic is separated from you by a pretty nice barrier. Still crazy noisy, though. 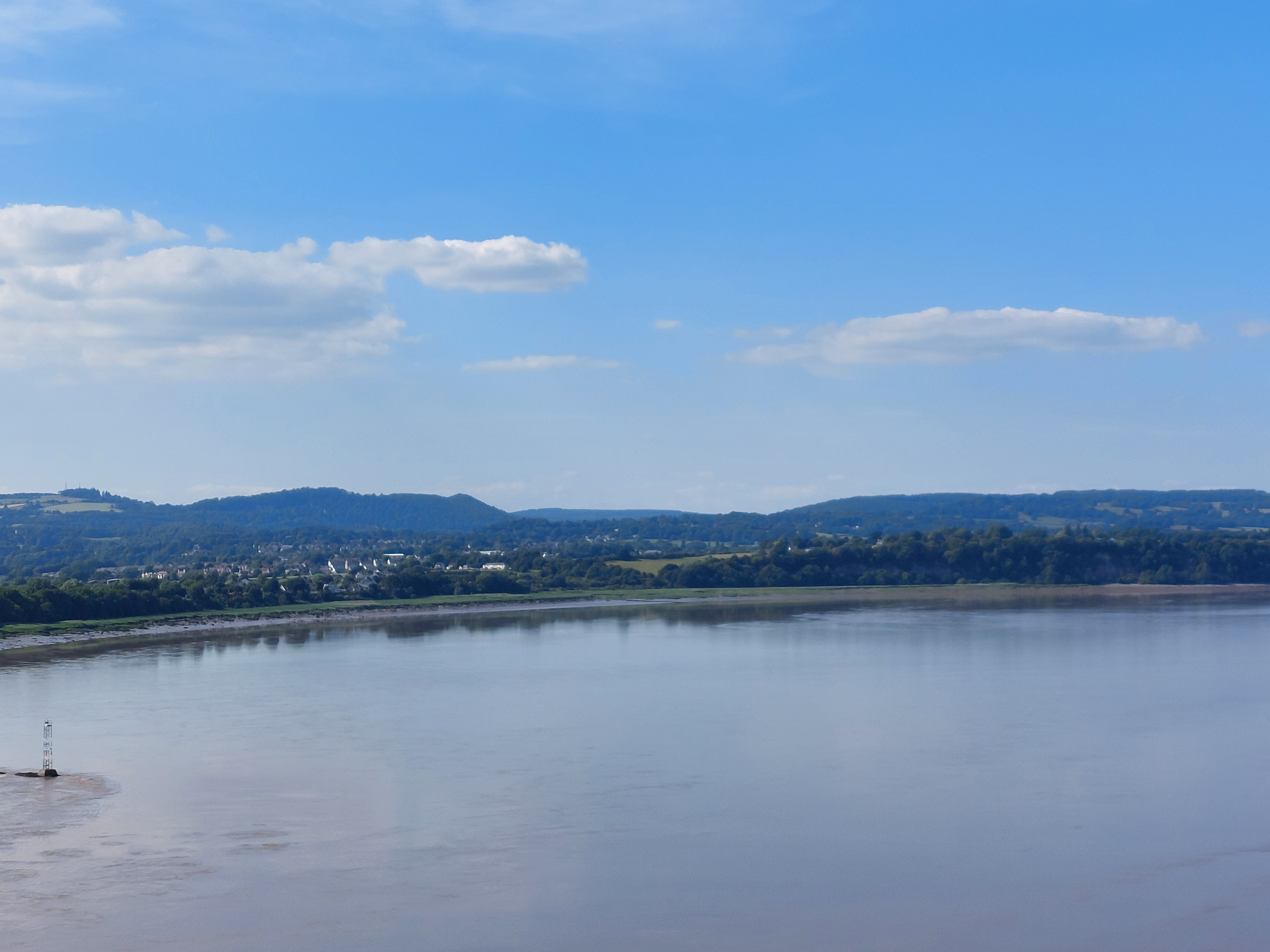 Now here’s my first view of Wales from about halfway across the bridge. 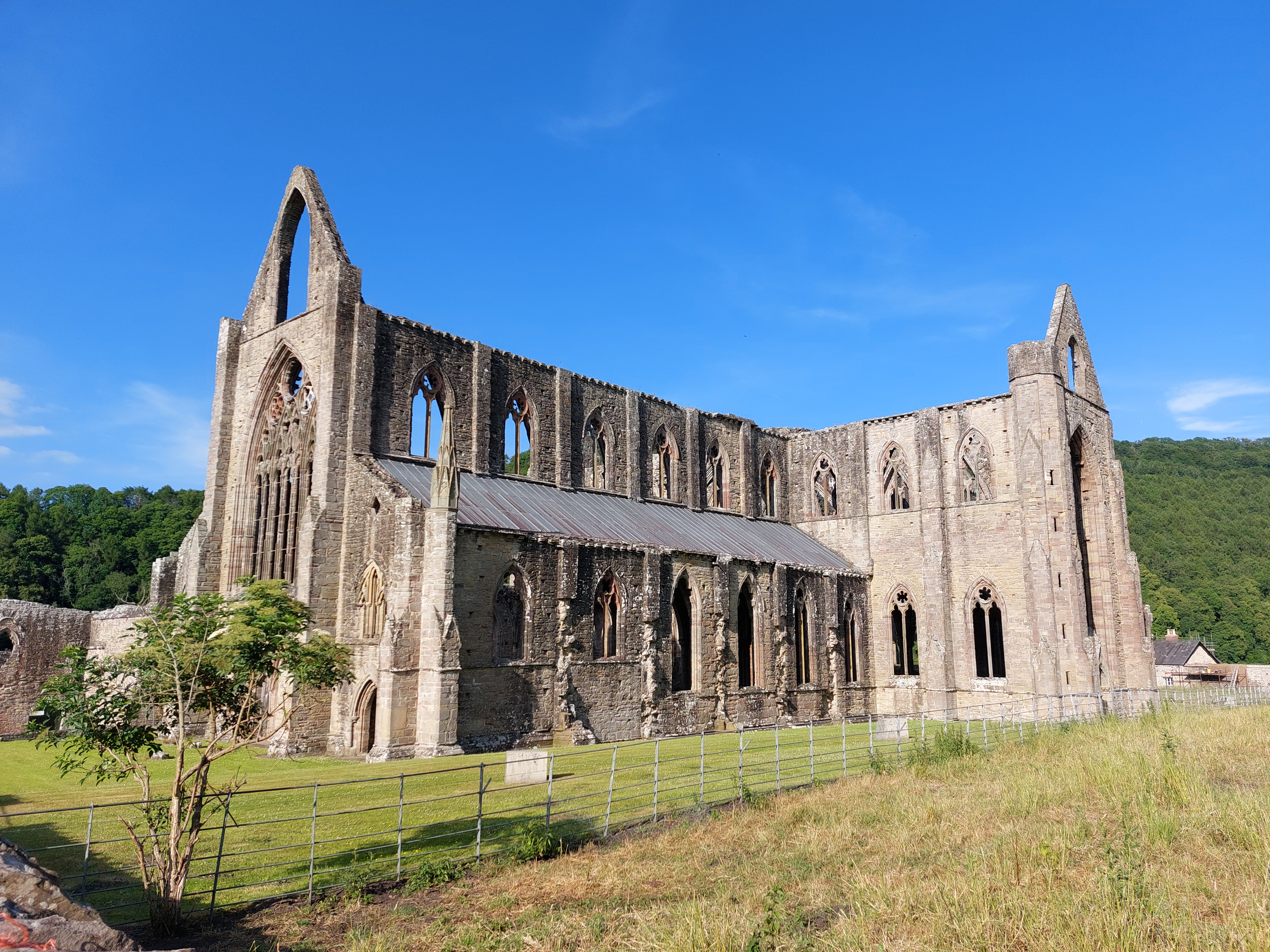 Almost forgot my daily church photo! This ruined abbey was partway up the river after I got over that major hill on the elevation map. There were more buildings in this area and you could tour them, apparently, but not this late in the day. 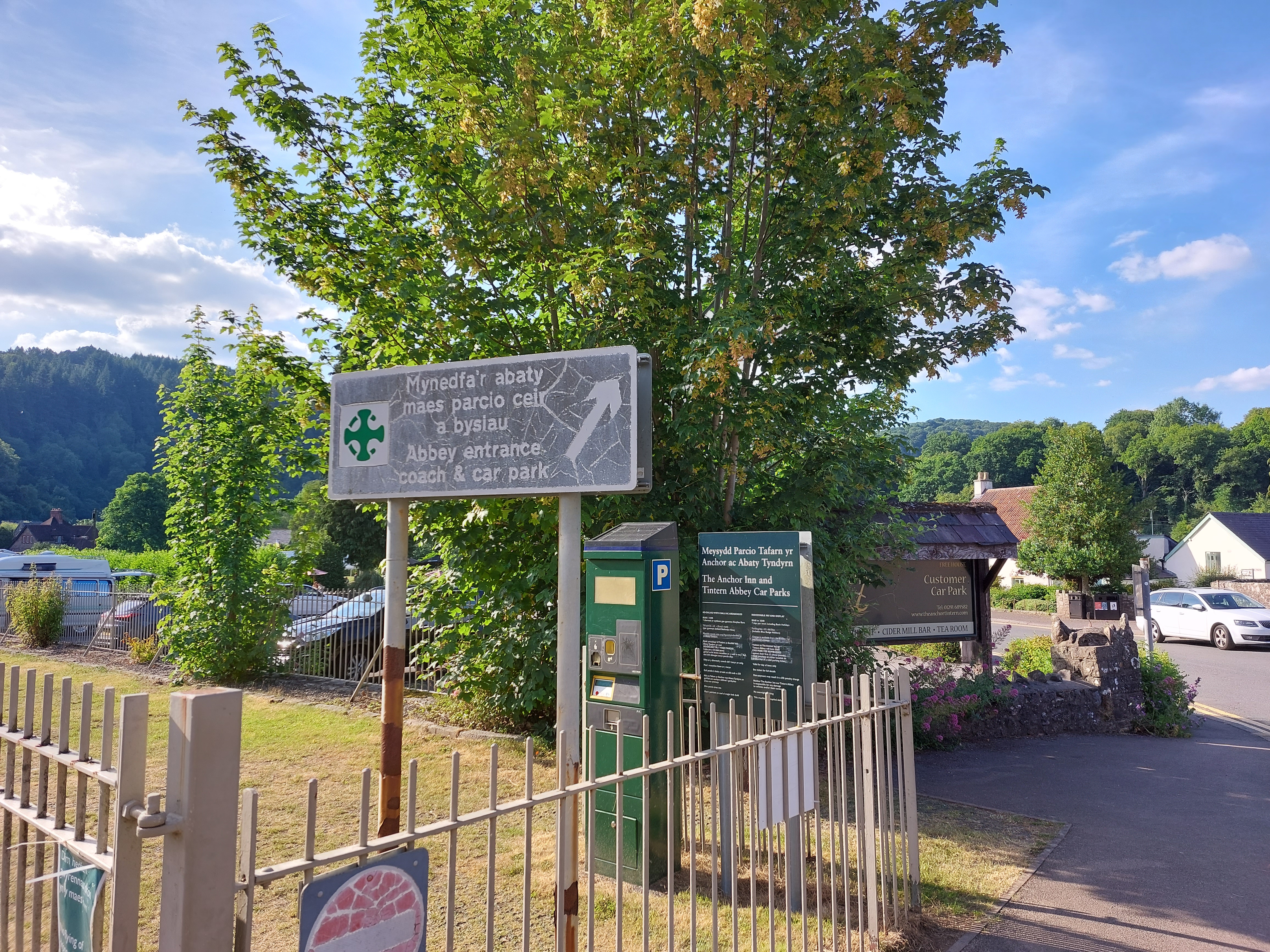 You can tell you’re in Wales when all the signs are in both English and Welsh (yep they have their own language here). 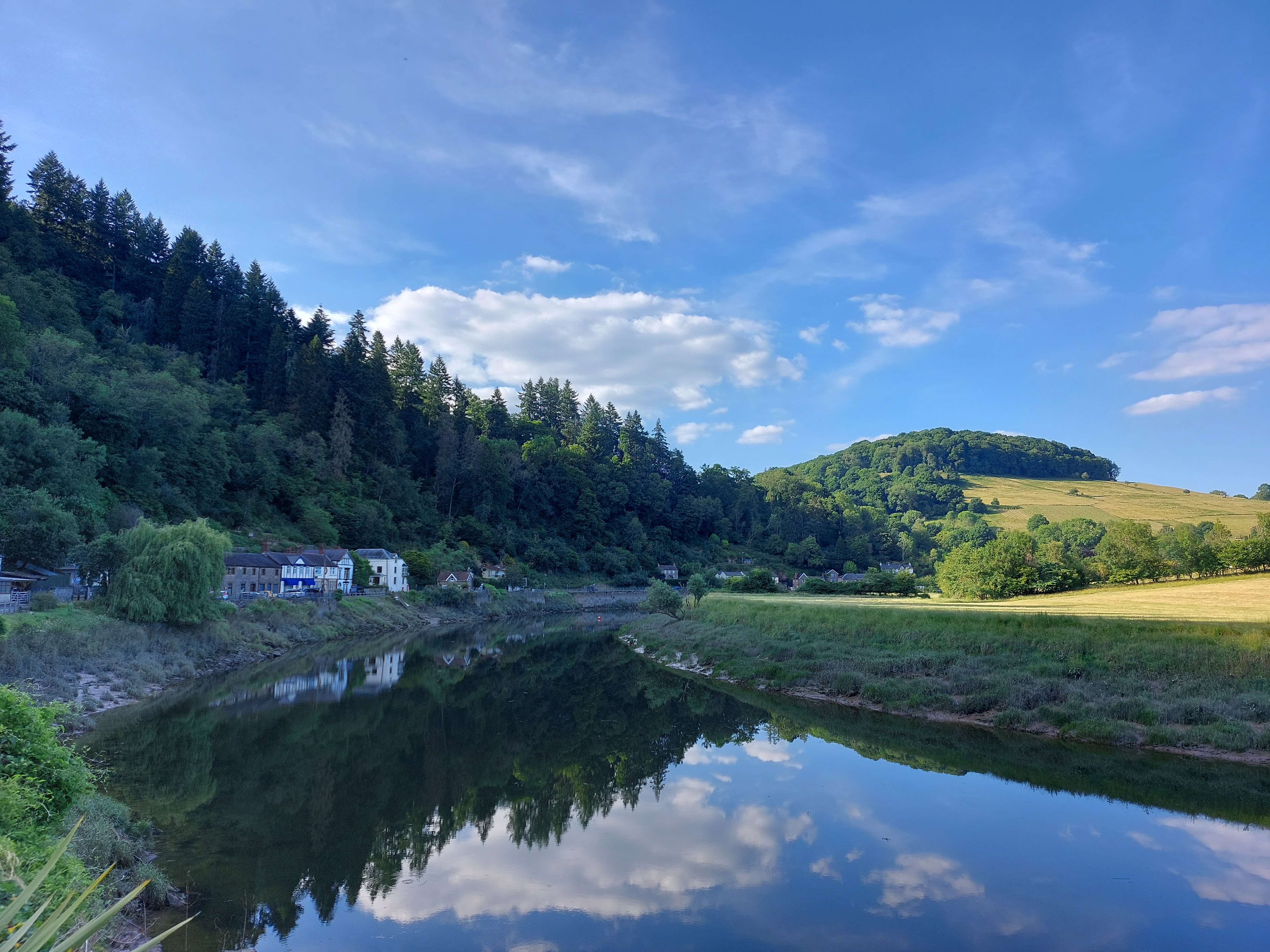 Here’s a really nice photo taken as I went around a curve in the road alongside the river. The water looks completely still, doesn’t it? 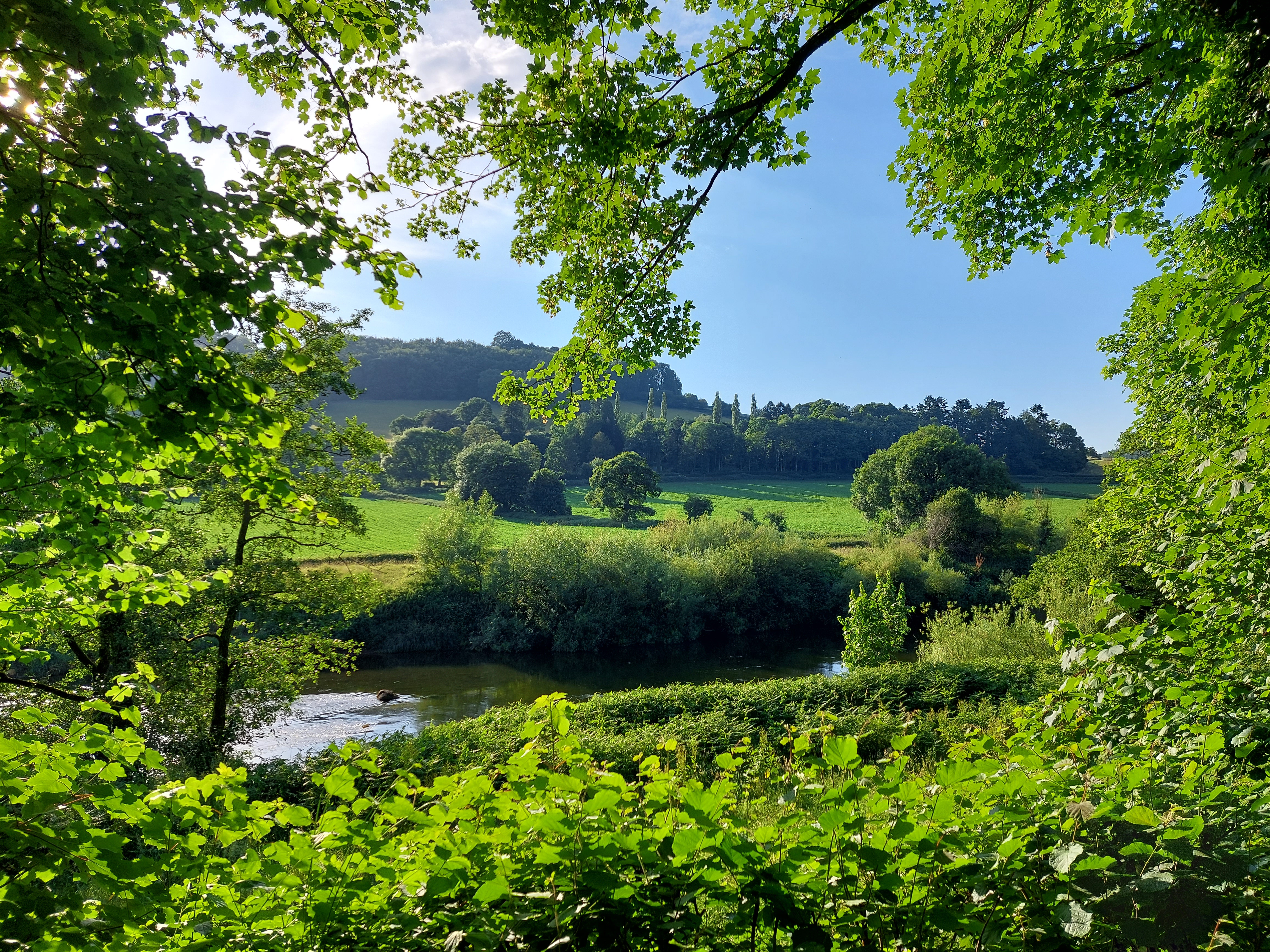 Another picture perfect scene from later on down the river. 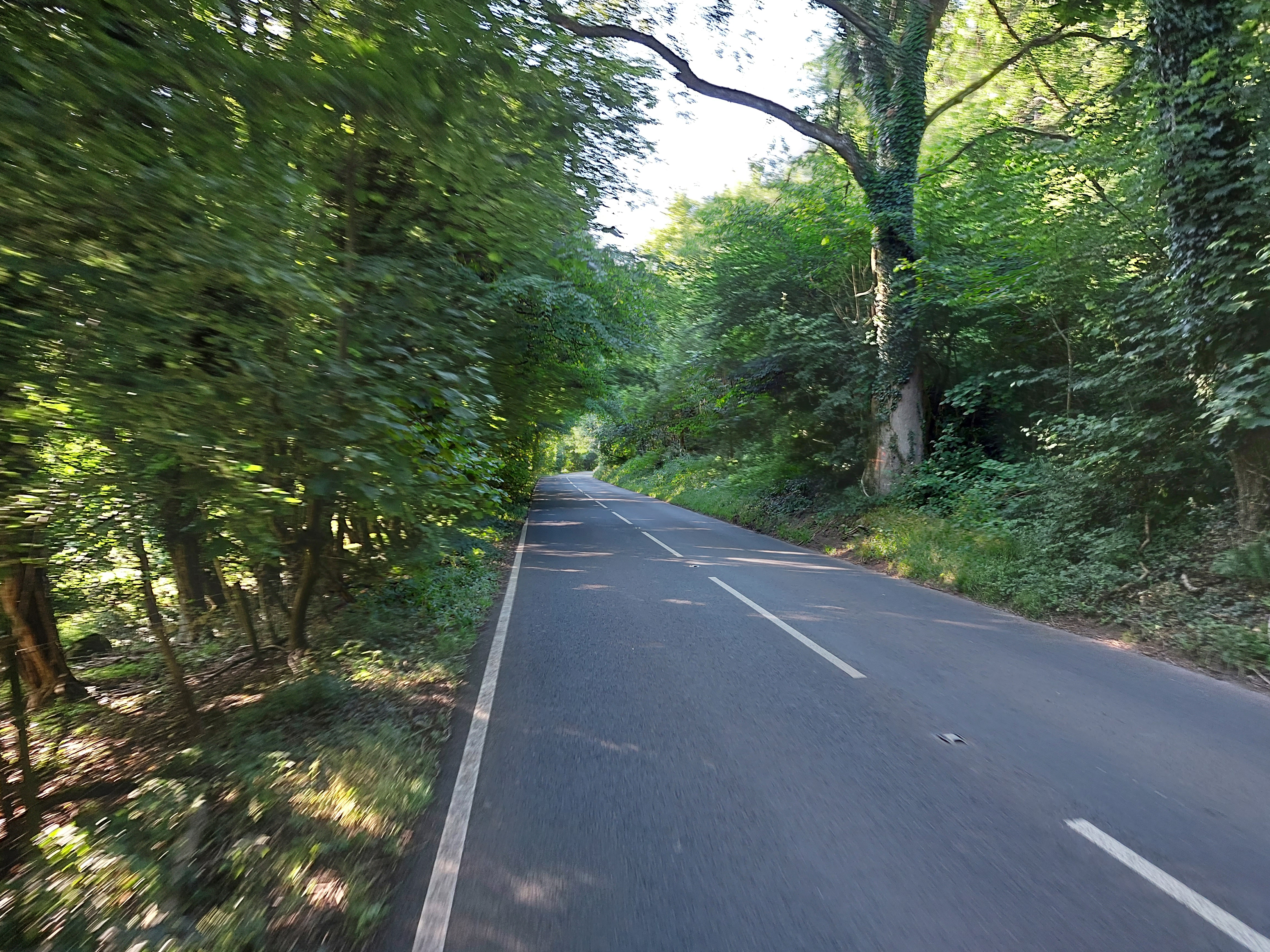 This was the road I was on for almost 15 miles once entering Wales. This is the longest I’ve spent the whole trip without turning or getting a direction change from Google Maps. As usual no shoulder, but traffic was fairly minimal so I didn’t have any real issues. (I took this picture while the bike was moving, by the way.) 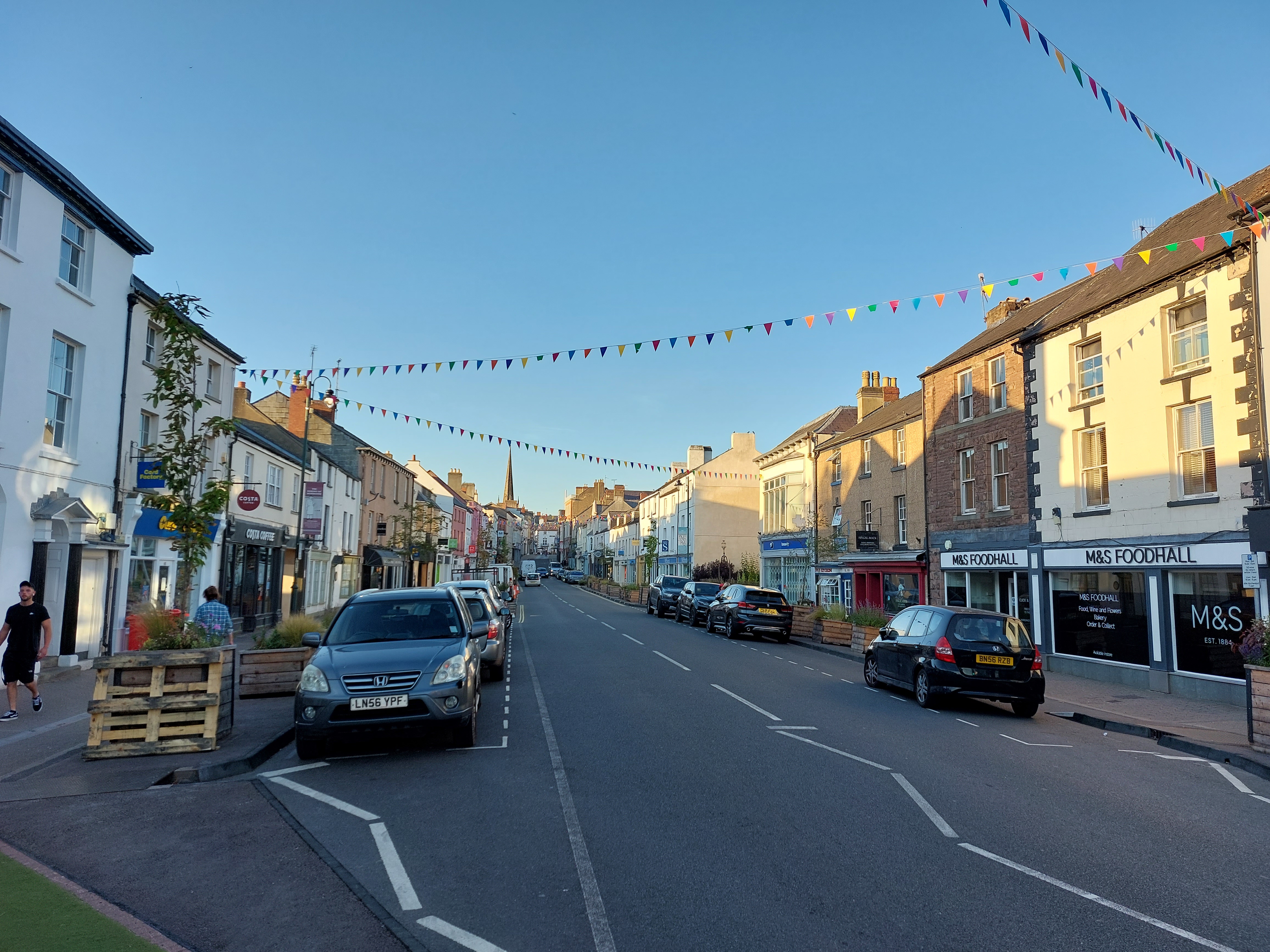 Here’s what the town of Monmouth looks like...very pretty and scenic. 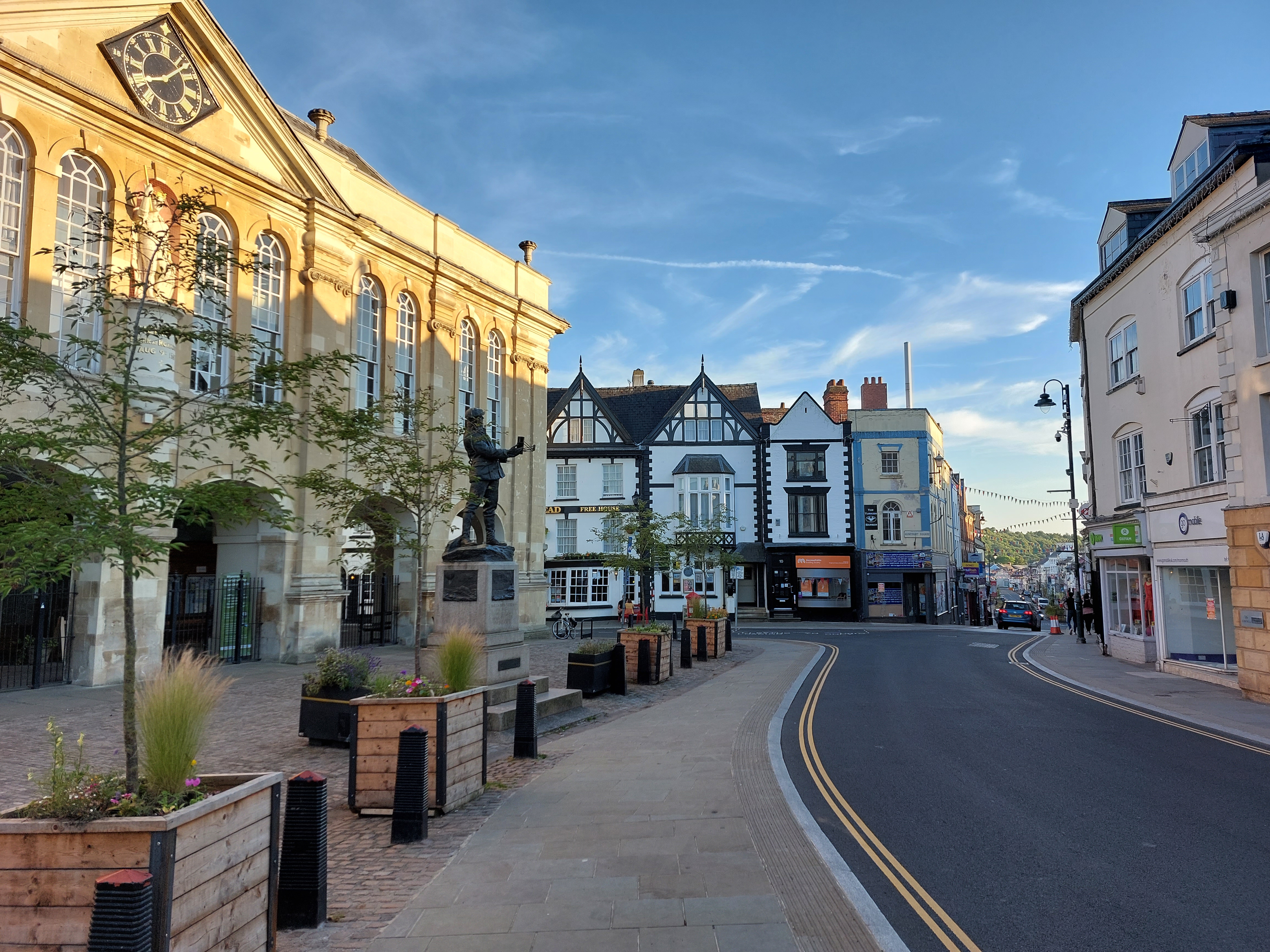 One more picture looking out from the main road, with my hotel in the center of the image (the white building) and the street I just came through on the right. Very picturesque town, but now it’s time to get a shower, grab some ice and have dinner, then work on updating this page, and finally bedtime. Tomorrow I may wind up camping again...we shall see. I think I have one more day before the rain starts up again.