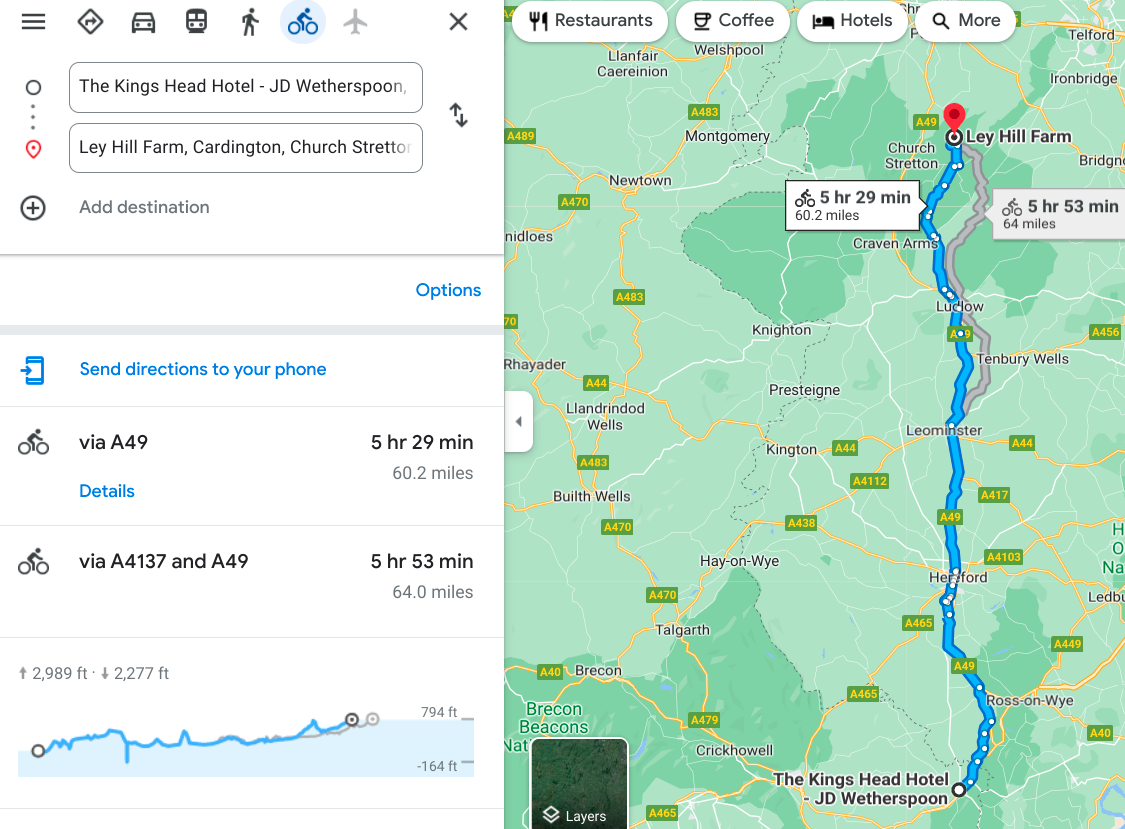 Monmouth, Wales to Church Stretton, England
Miles: 63
Terrain: Lots of climbing including some really tough ones
Weather: Warm and pleasant, no significant wind

I knew this was going to be a tough day but had no idea just how tough...the climbs were constant and brutal, sometimes going on for miles, other times becoming so steep I had to push the bike, often with breaks in between the pushing. One of the most difficult climbs came in the early morning, as I got on a busy road and had to struggle uphill for at least a mile before it mercifully dropped...and then that same thing got duplicated later in the day at that one really big climb you see on the elevation map. That one was on a shoulderless highway with no room for error or stopping, so up and up I went. I thought the last few miles to the campground would never end.

The whole time I went along I kept telling myself the next few days will be so much better, and I’m sure they will, but that didn’t help much as I suffered through pretty much the worst day of the trip, hill-wise. I think the 90-mile day back on Day 3 was worse, but not by much. At least that one had flat terrain for half the day. Fortunately the wind today wasn’t much of a factor and the weather stayed mostly pleasant.

The ride went almost exclusively north through a variety of terrain, mostly farms and small towns except for some busy streets in Hereford, and some nice architecture in Ludlow. Then it was back out to farm country on my way to the campground, which was my second farm camp of the trip. The last one had power but no water, this one had water but no power. Luckily for me I had a fully charged power brick for my phone or it would’ve been a touch day coming up, trying to route my way along with no idea of the road conditions. By some miracle I was able to find a spot in the field where I could get a cellular signal long enough to fire up the route, but there was no way to do any other advance planning like look for hotels. Camping is definitely cheap (this place was only 8 pounds a night!) but you have to give up some amenities. They did have a hot shower, though, which I definitely needed!

Anyway, on to the photos... 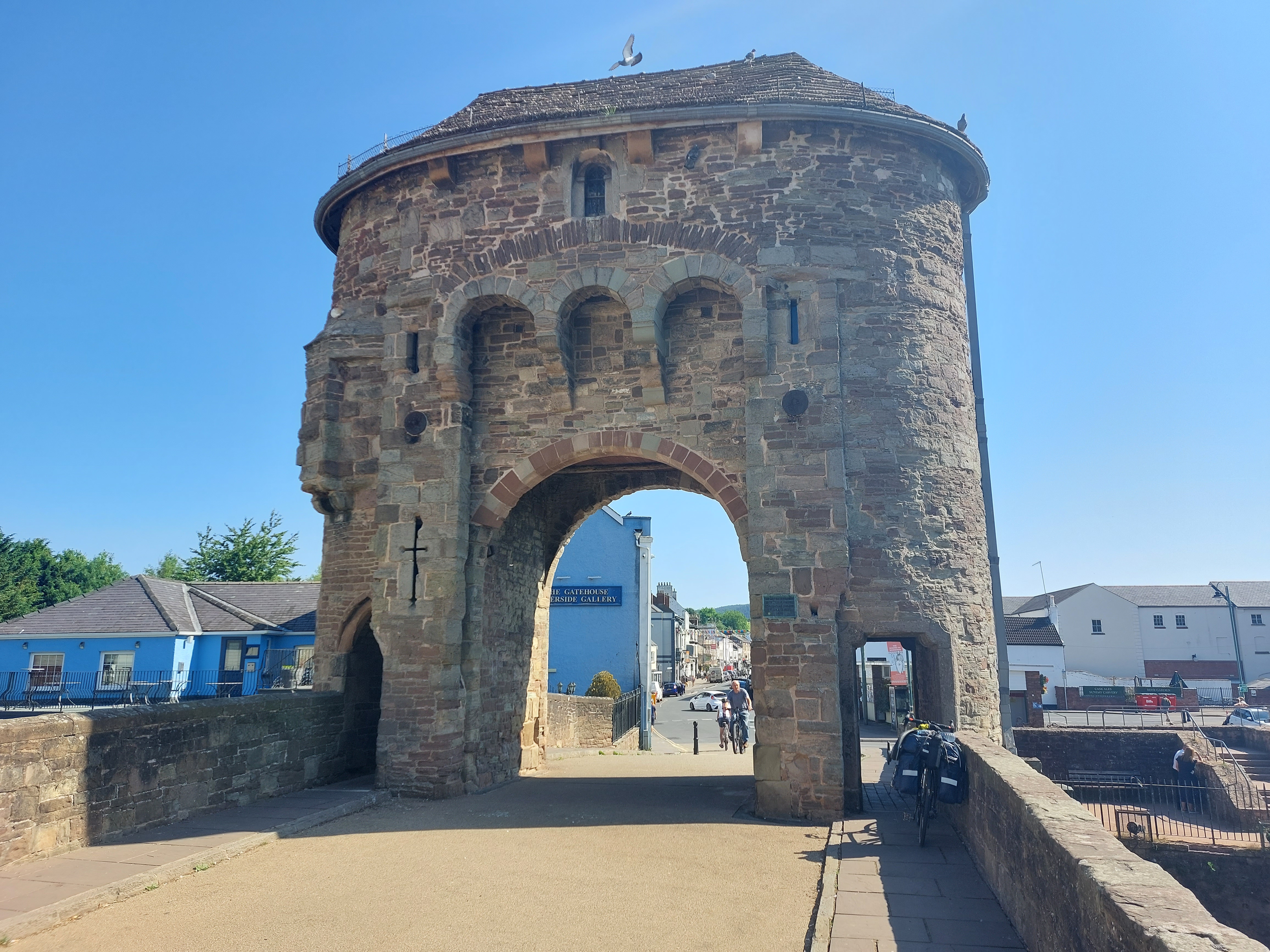 This scenic gate in the town center of Monmouth is (according to the sign) the last gated bridge with the bridge still intact anywhere in the UK. 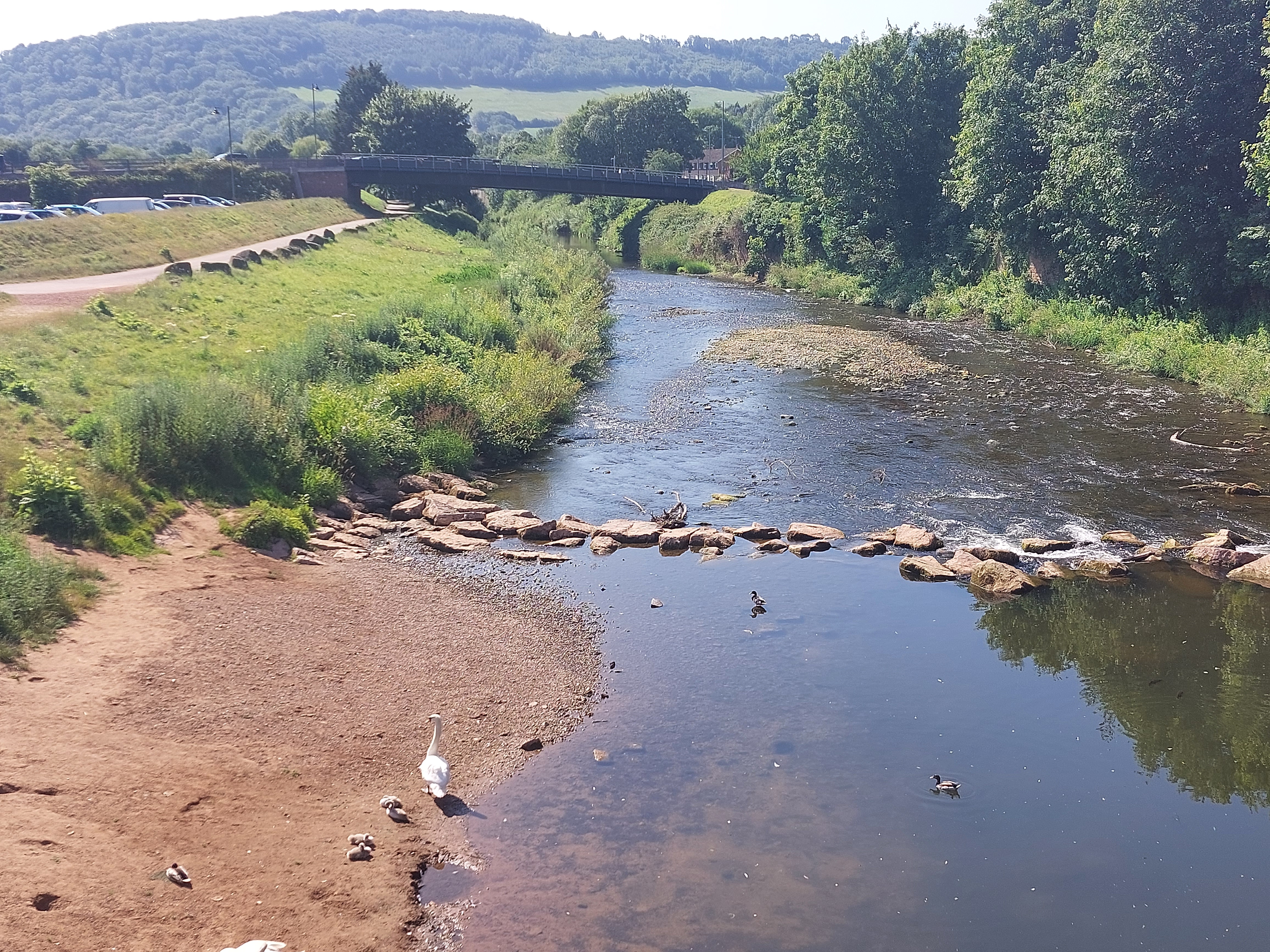 This is the view looking out at the river in question. Not terribly scenic, but there is a Random Wildlife Sighting to be had...swans and baby swans. So cute! 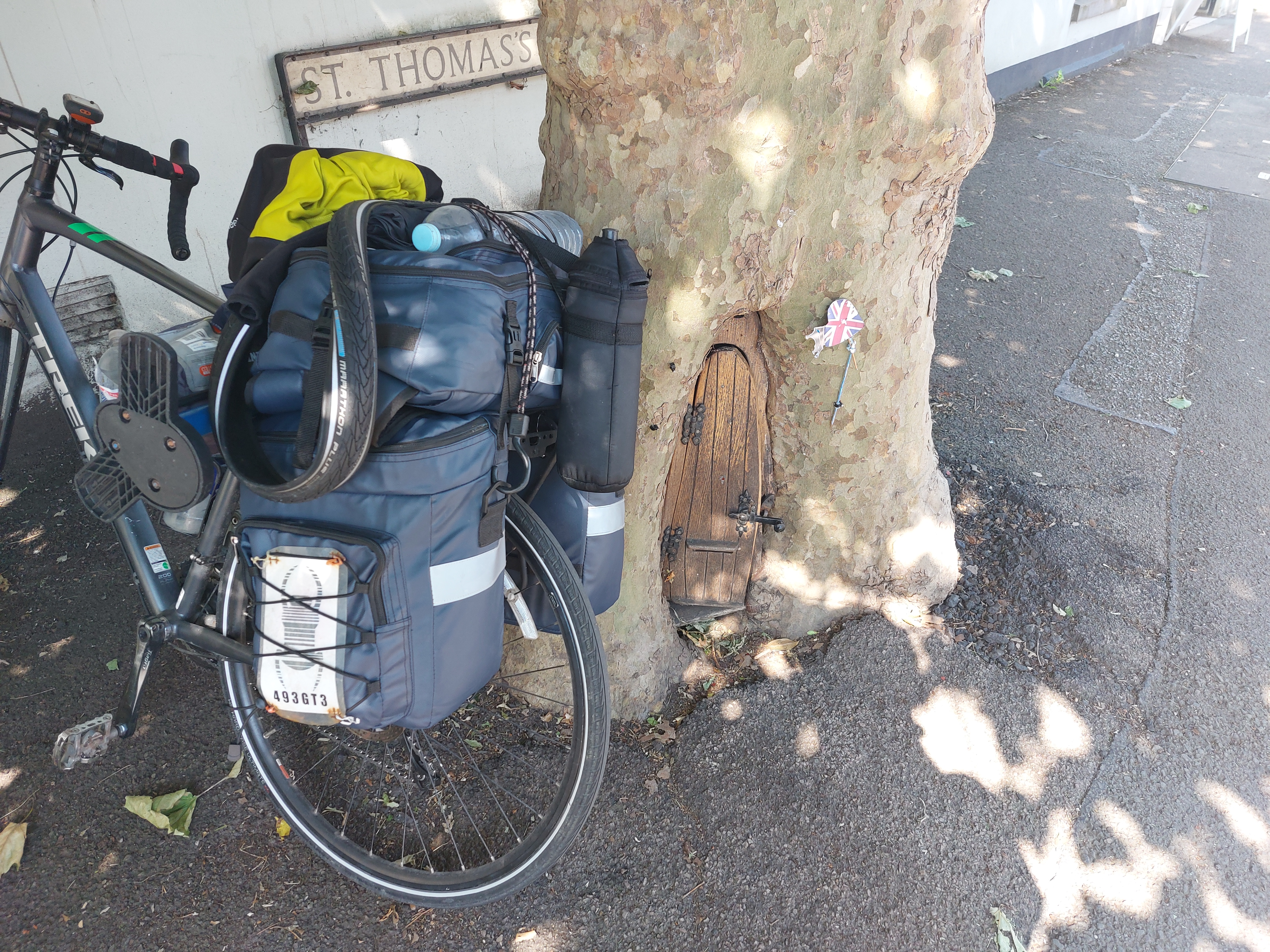 Before leaving Monmouth I encountered this gnome-sized dwelling in one of the trees. You never know what you’re going to run into in places like this. (Geocachers, feel free to log the TB) 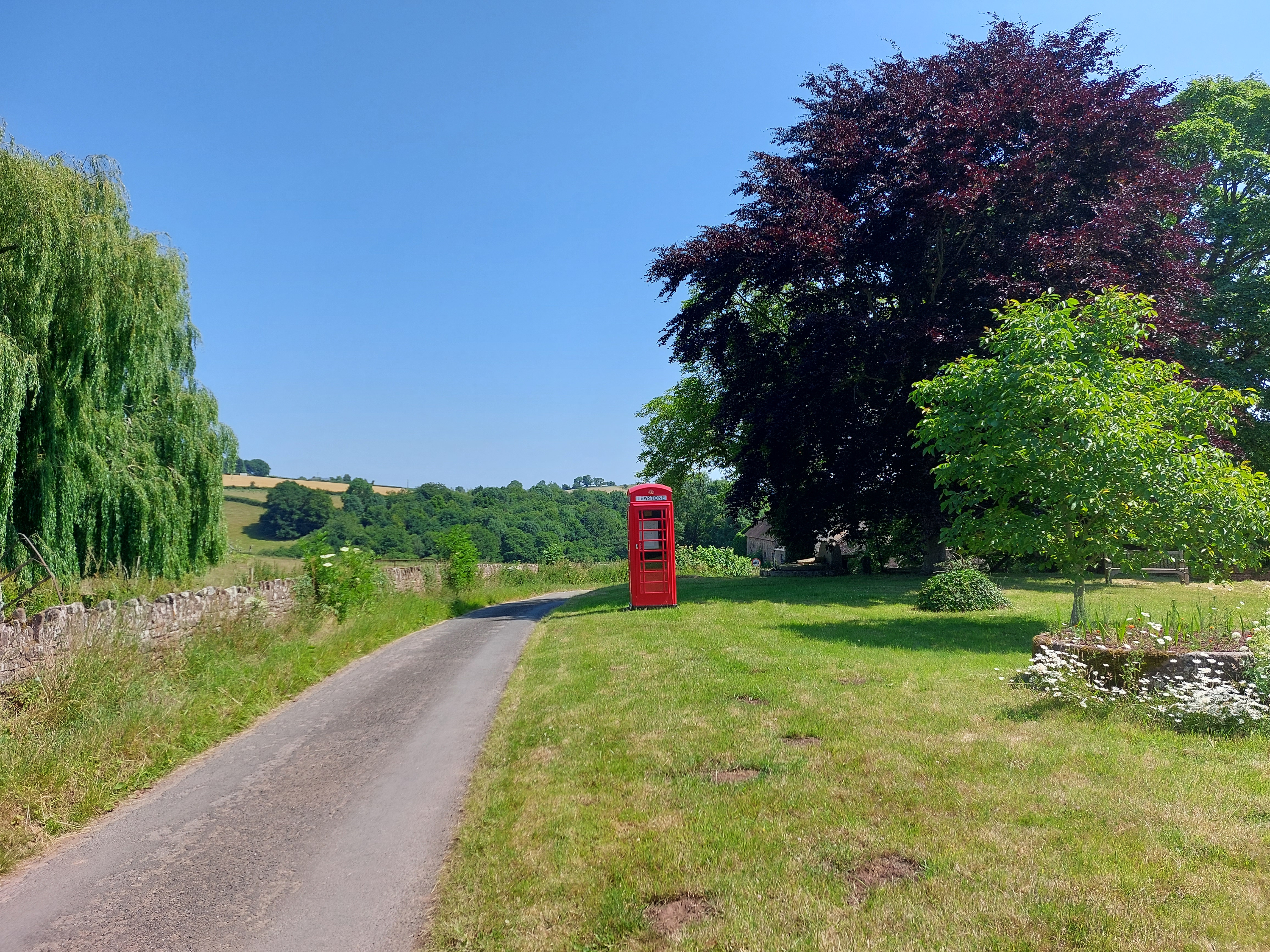 Back out in the countryside, I was just about to take a great scenic shot and this phone booth jumped out and photobombed me! How rude. 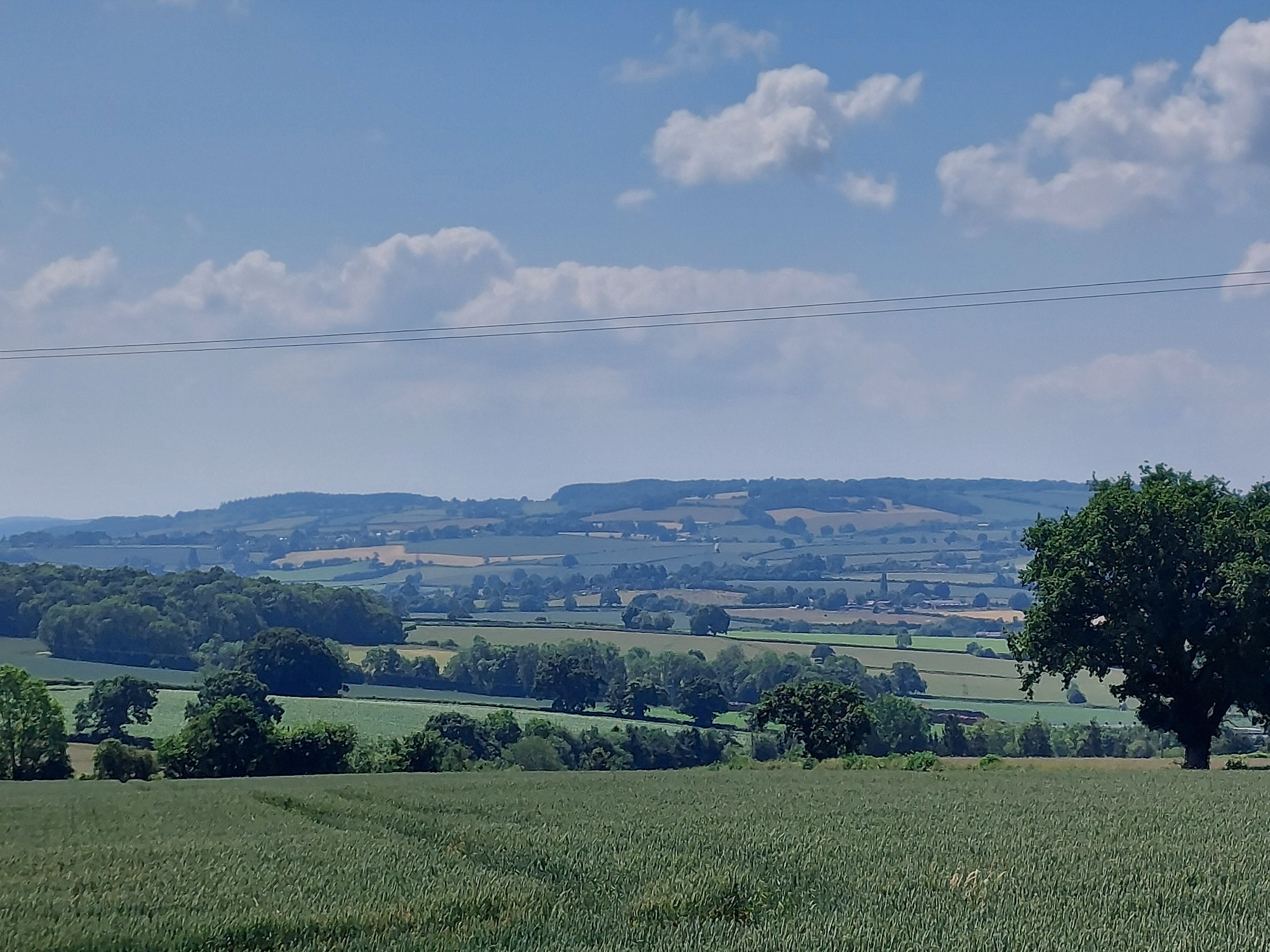 One thing about climbing hills...it gives you some good opportunities for scenery. There are several such photos today, and here’s the first. (No phone booths this time.) 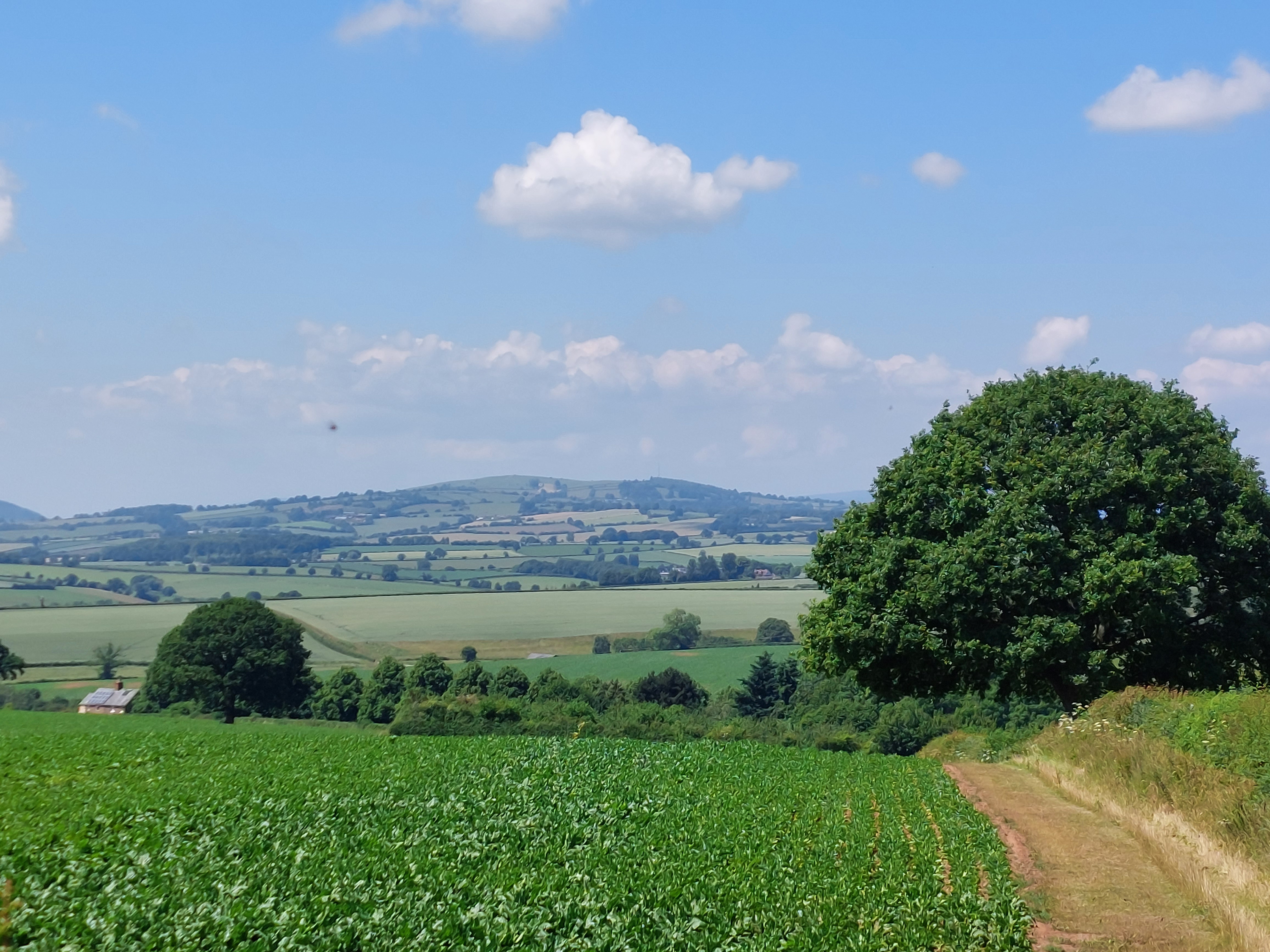 Looks similar to the last one, but this is actually quite a ways further. 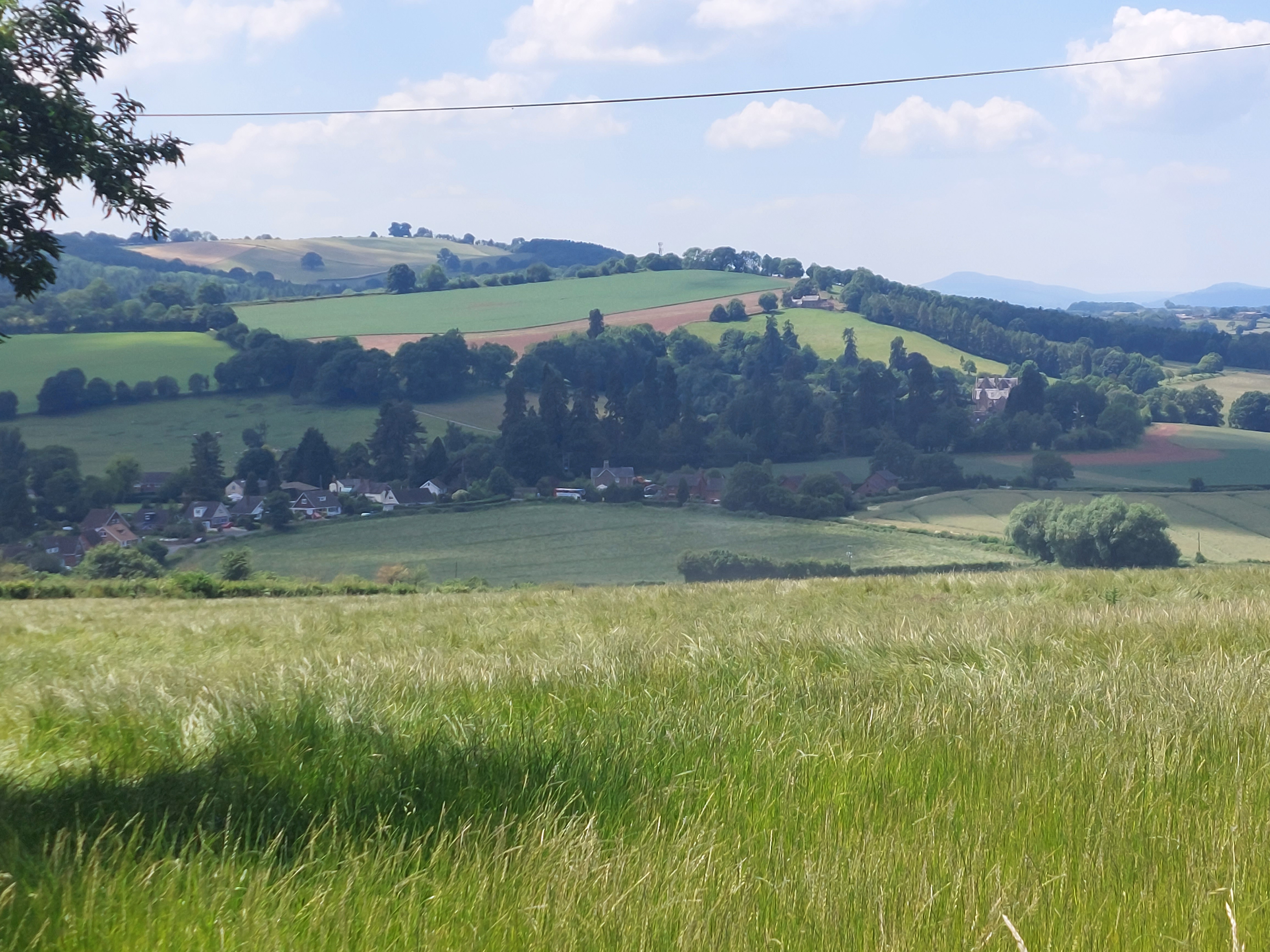 And here’s another one. As my Dad would say, “They’re all starting to look the same.” Which is true...but the point is, this is the payoff for all those miserable hill-climbing today. 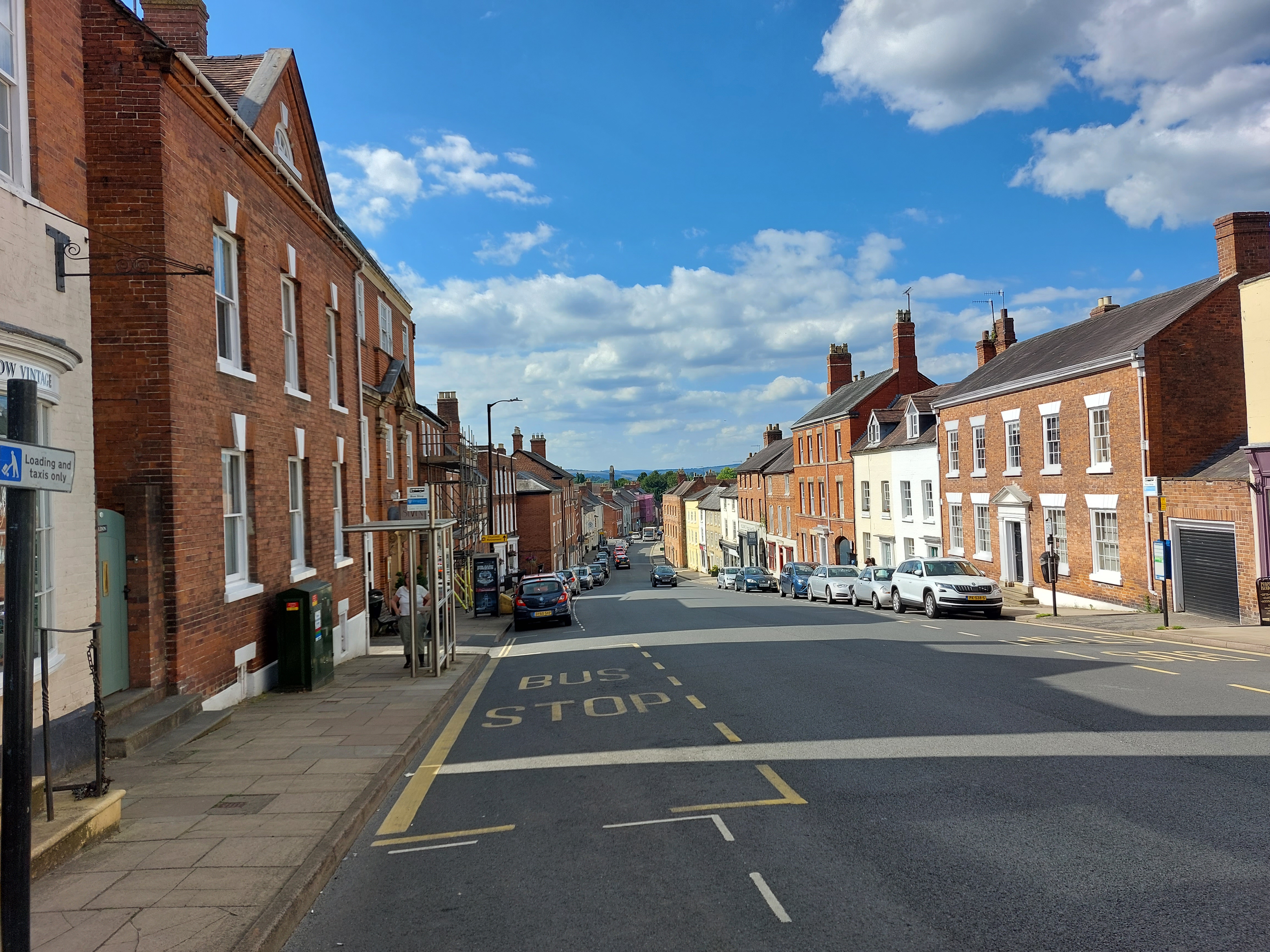 Now for a few pictures that showcase the different kinds of roads I got to bike on today. Here’s a town scene, first of all. Not too bad, and for once reasonably wide. 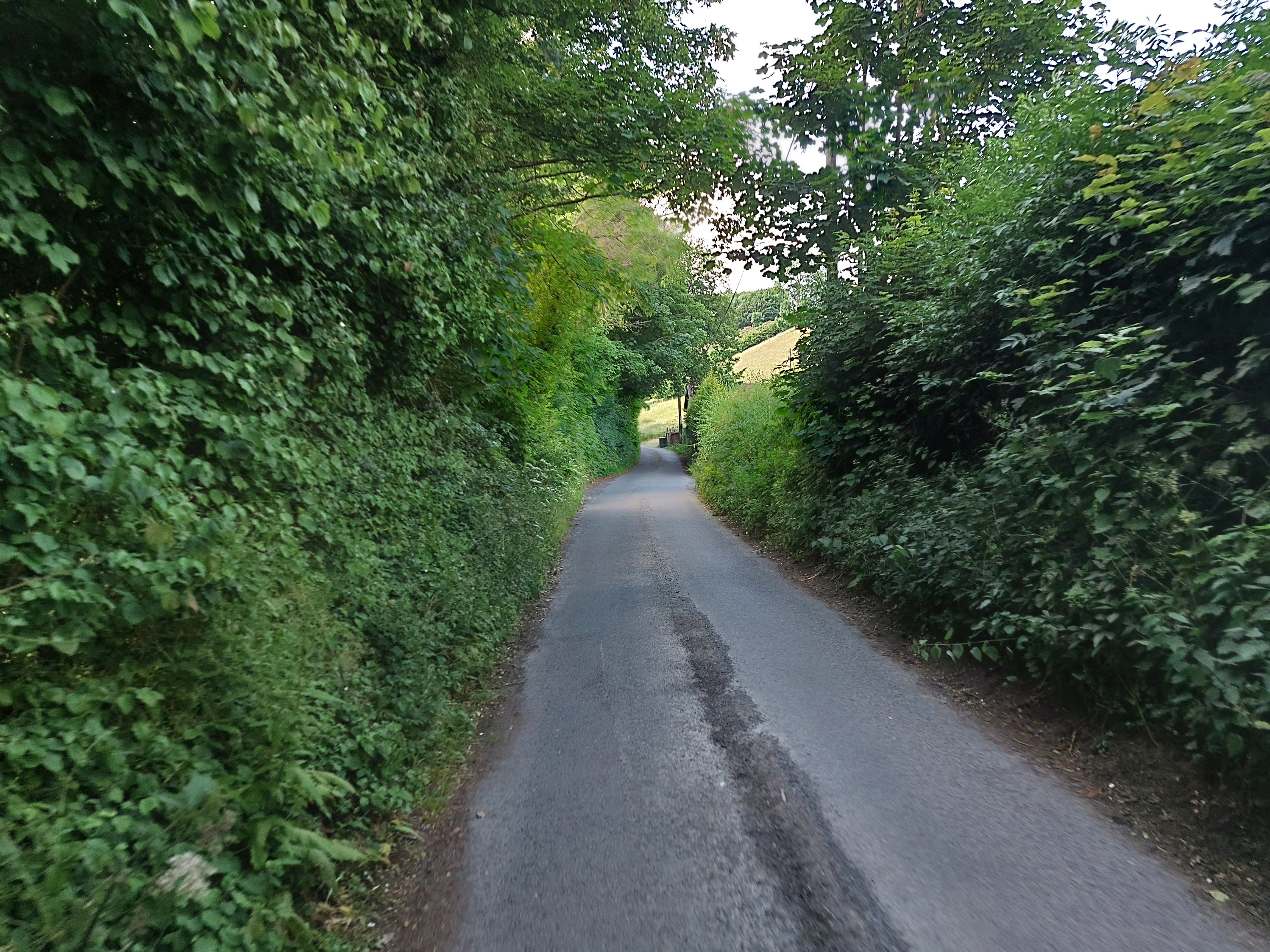 Now this road is typical of the one-land (but two-way) roads out in farm country. Sometimes they were nicely paved like this one...other times, not so much. 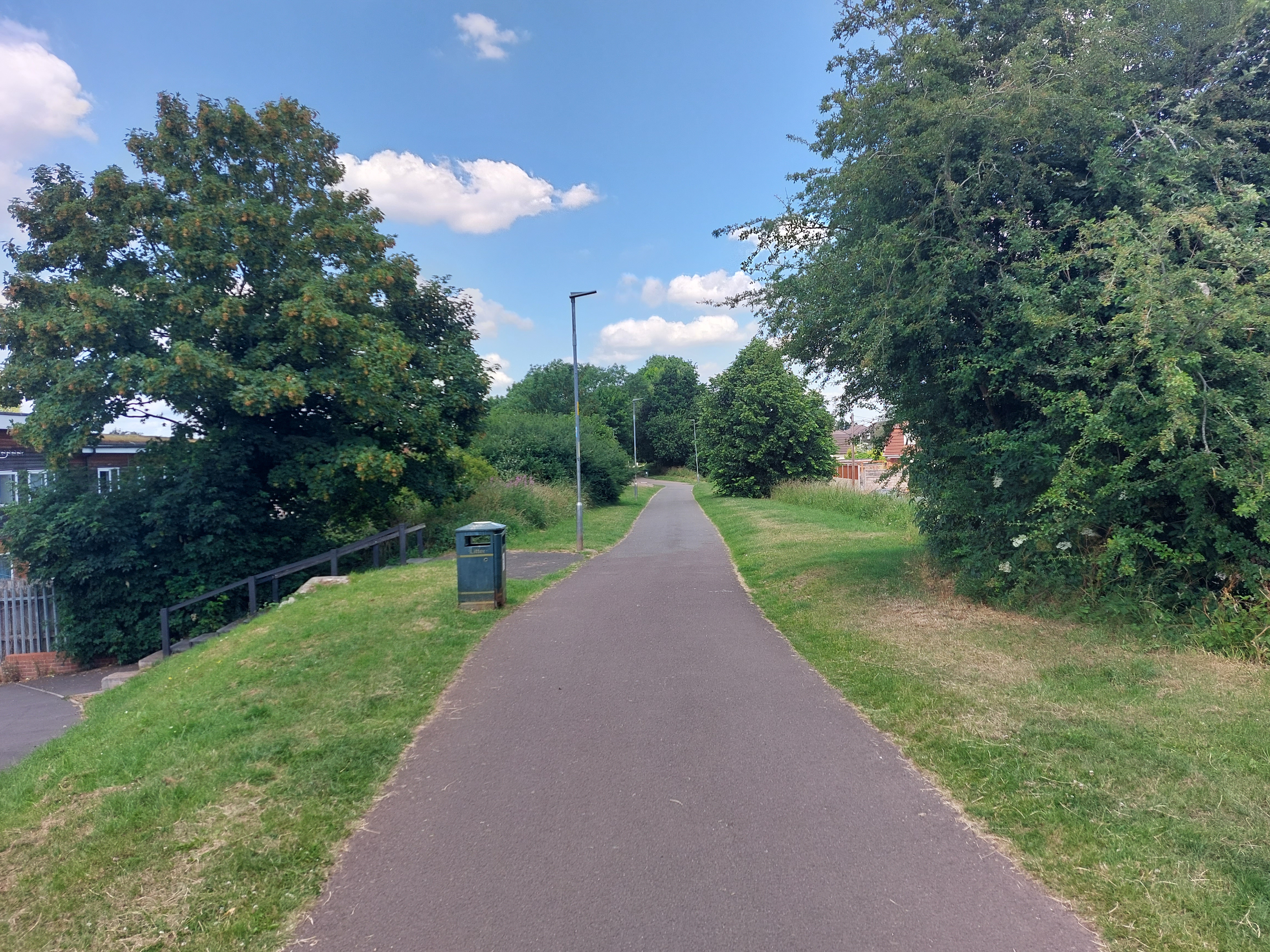 Then every so often I got blessed with an actual bike path, and those were the best. Also the rarest, and the most likely to have pedestrians and bicyclists on them. 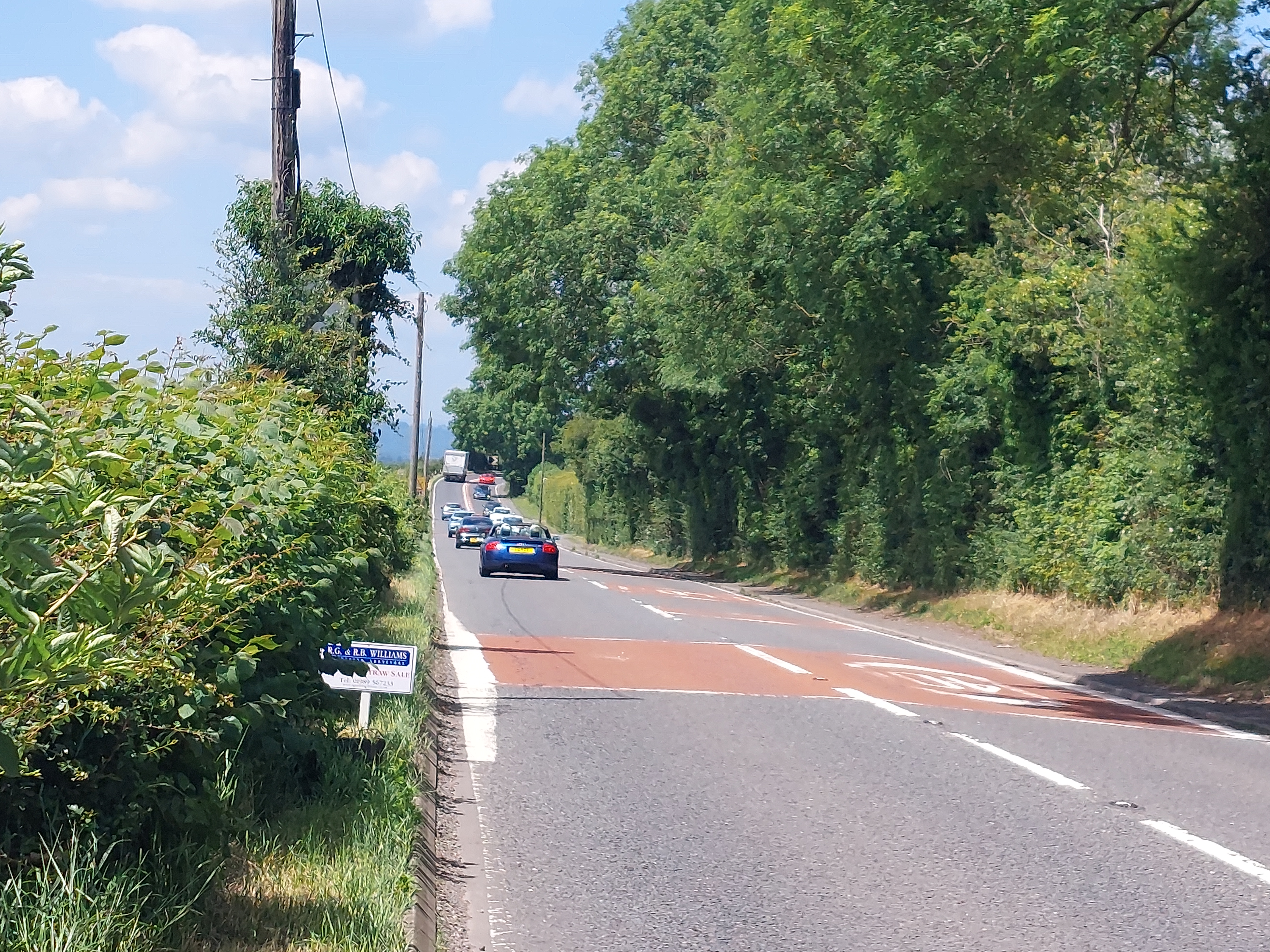 Finally here’s the last kind, and the worst...the A-roads, which in the USA are like two-land state routes. They had max speeds ranging from 40mph (like this one) up to 60 and almost never had any kind of shoulder. You just hug the left as best you can and try not to hit any road debris or ruts, or those stupid sewer grate openings that are everywhere. The fun part was when the giant double-decker trucks or huge tour buses went by, but at least they usually gave me plenty of space. 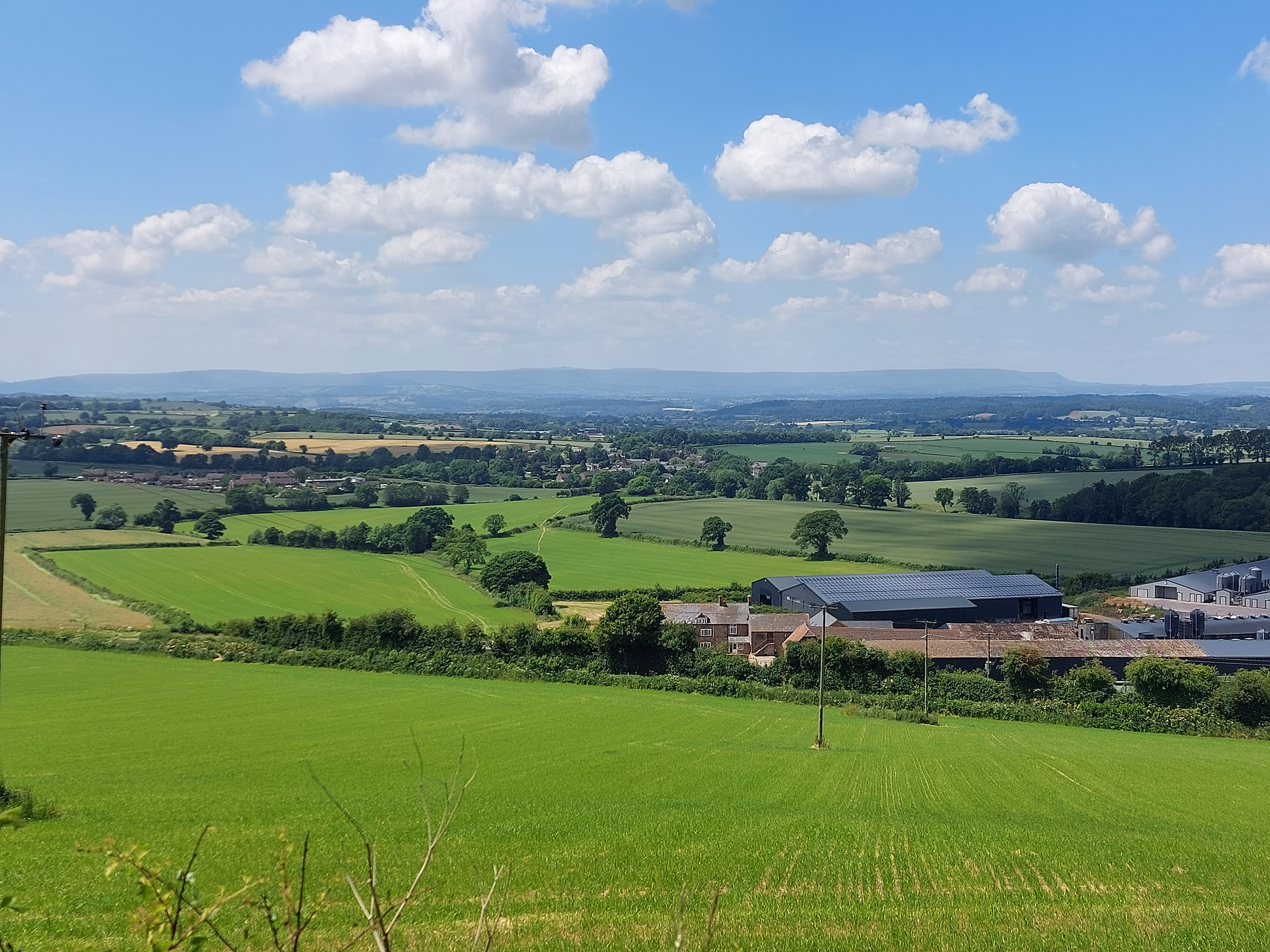 But enough of that, back to the scenery! Wow, just breathtaking, isn’t it? Totally worth it. 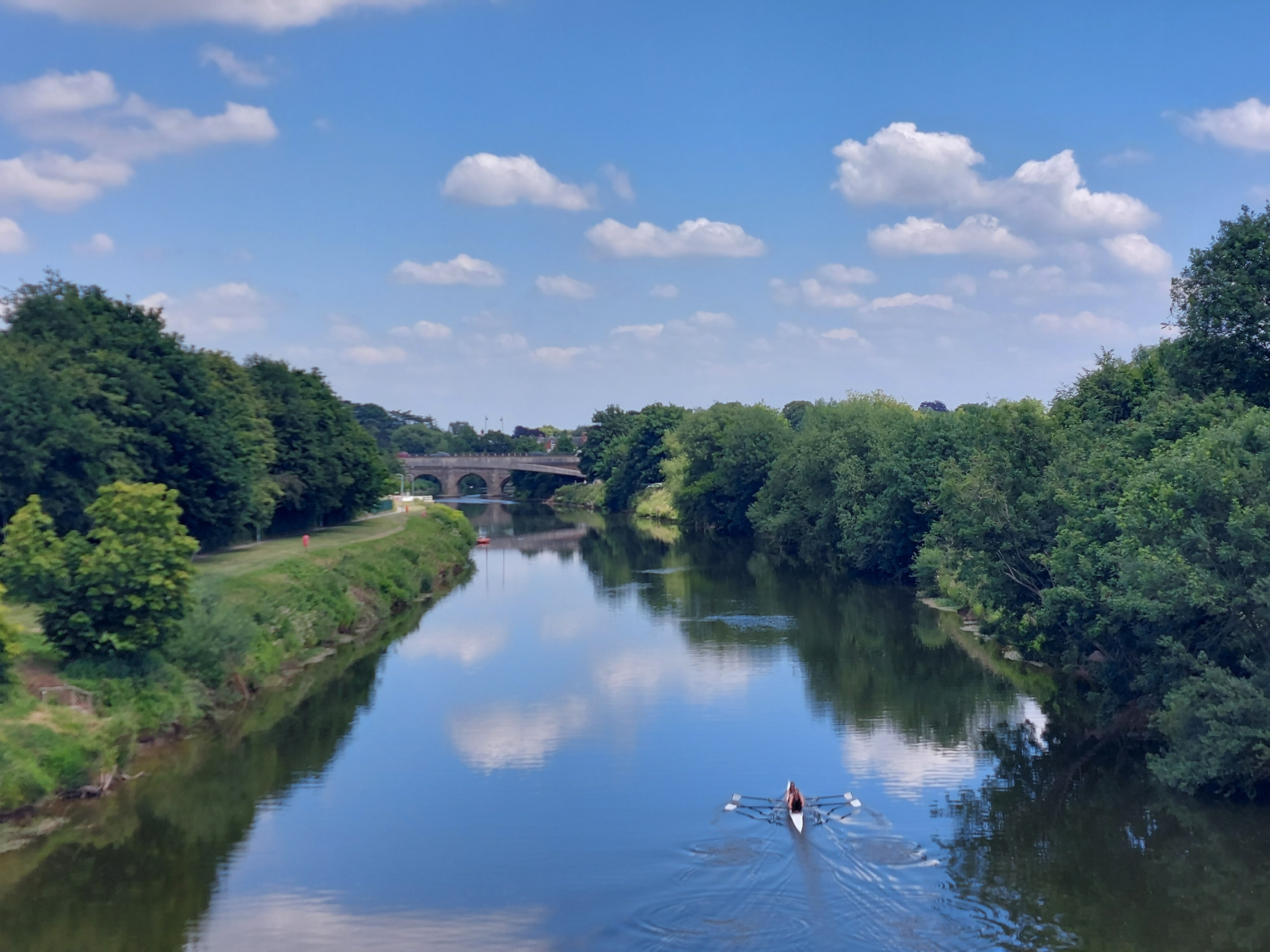 Here’s a great shot of a river crossing later in the day, just as some rowers went past. Perfect. 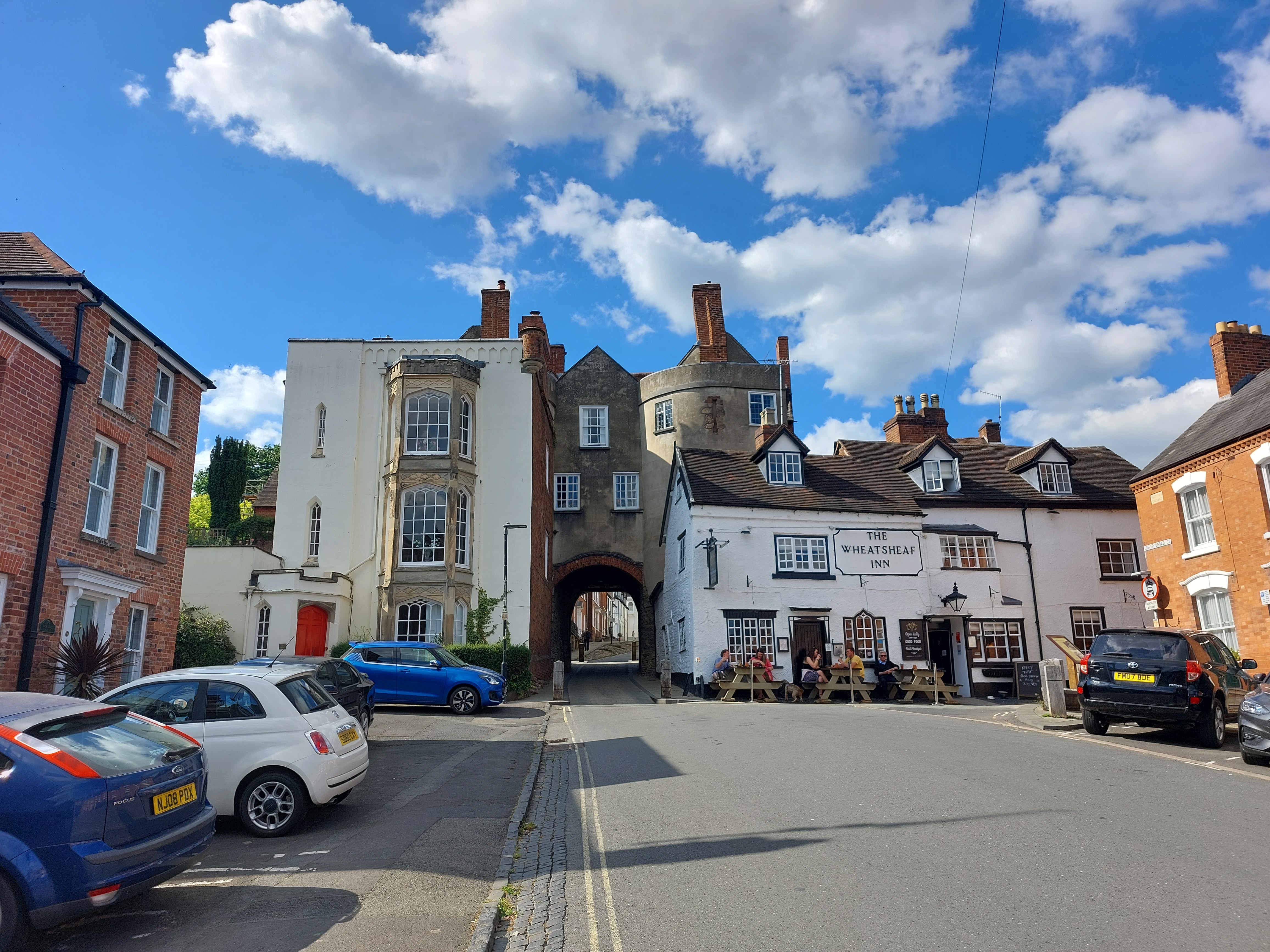 This is the town center of Ludlow. Check out that cool building with the tunnel through it. 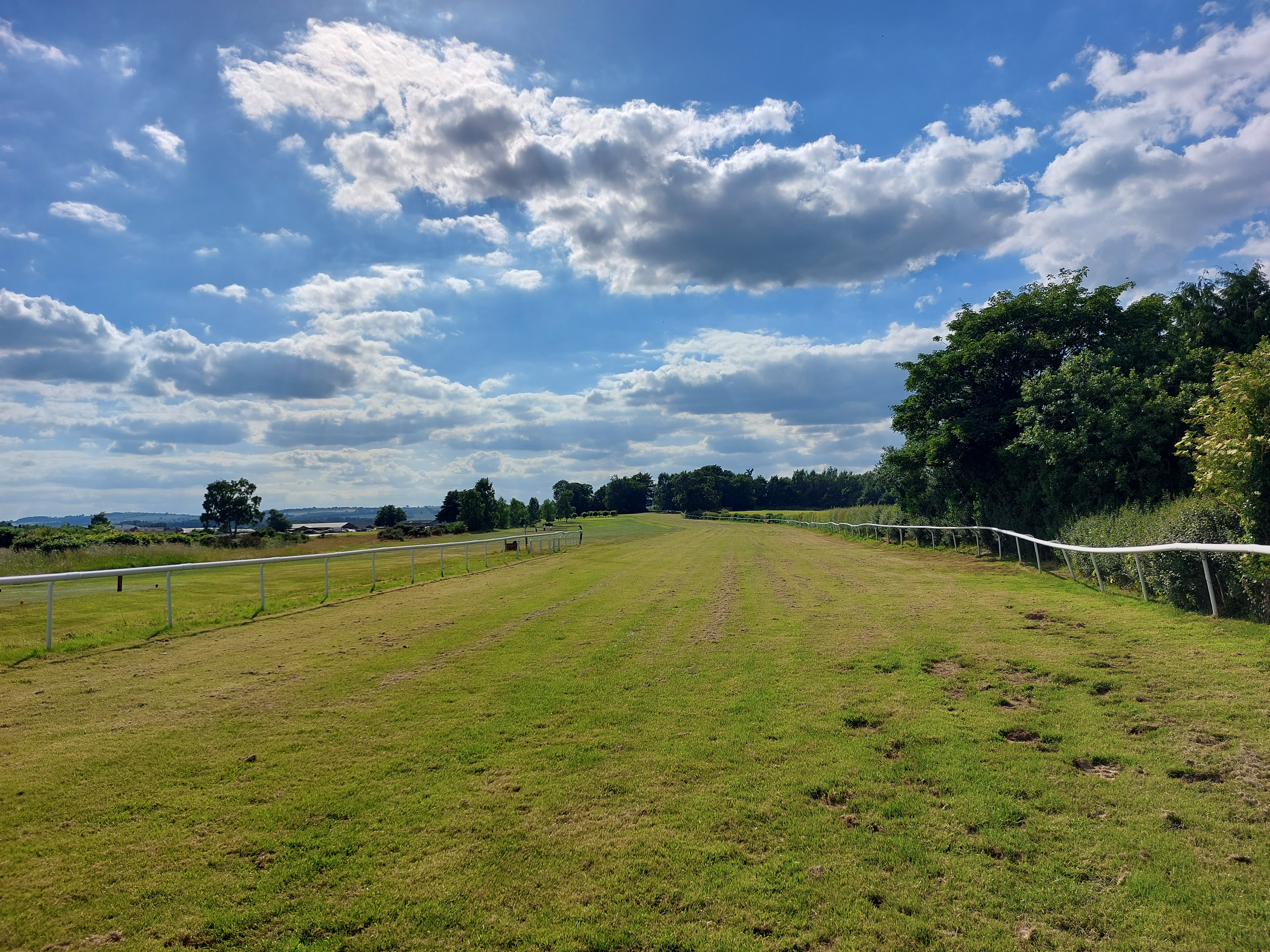 Sorry, it’s a bit hard to make out what’s going on here, but this is a steeplechase track that doubles as a golf course. If you look ahead just to the left of the end of the fenceline there, you can see some golfers ahead (also the tees are visible to the very left of the picture). How’d you like to be lining up your chip shot when a bunch of horses race by right next to you? 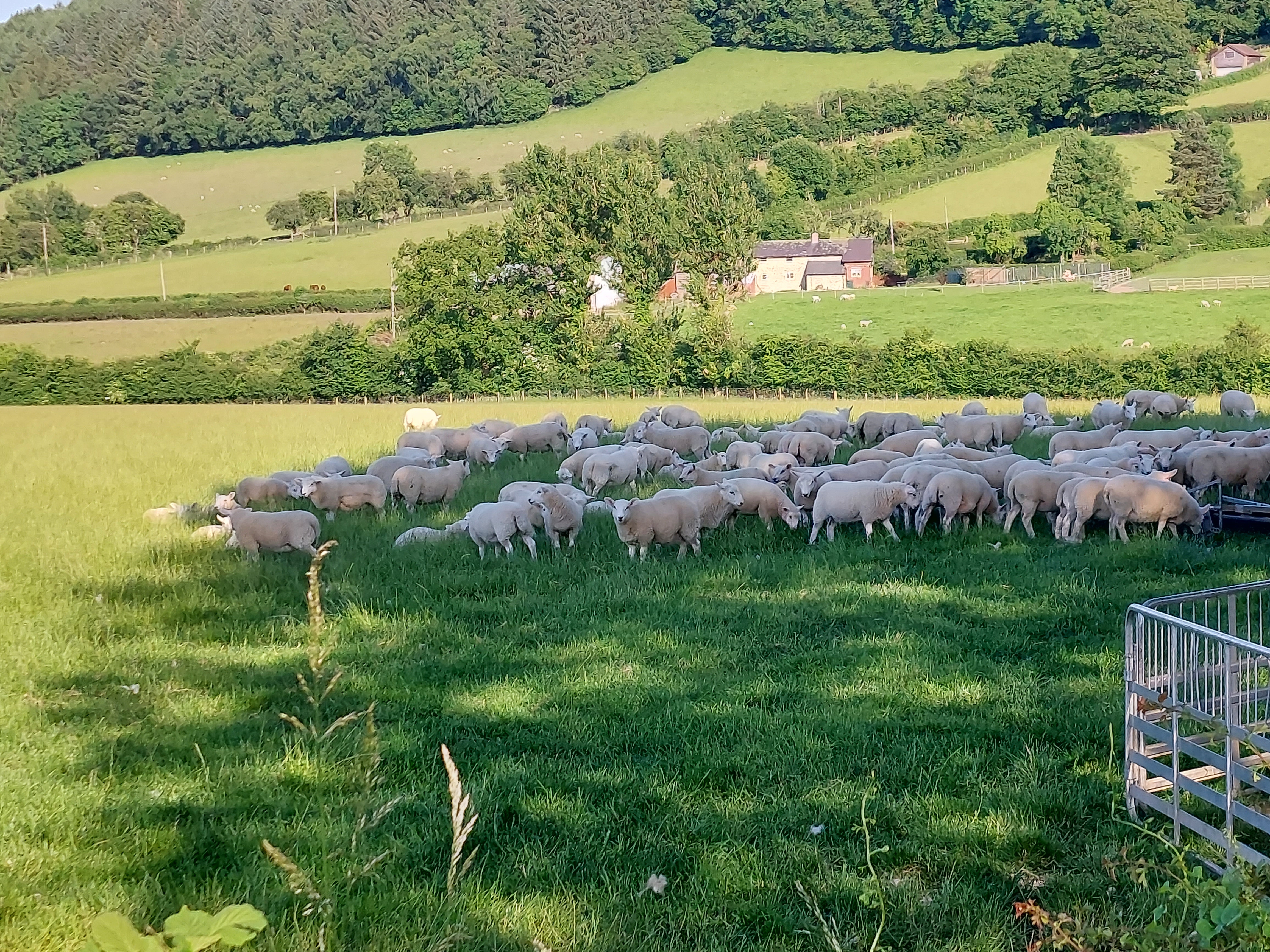 The further I got away from Ludlow, the more numerous the sheep became. Baa! Baa! These critters sure are noisy. 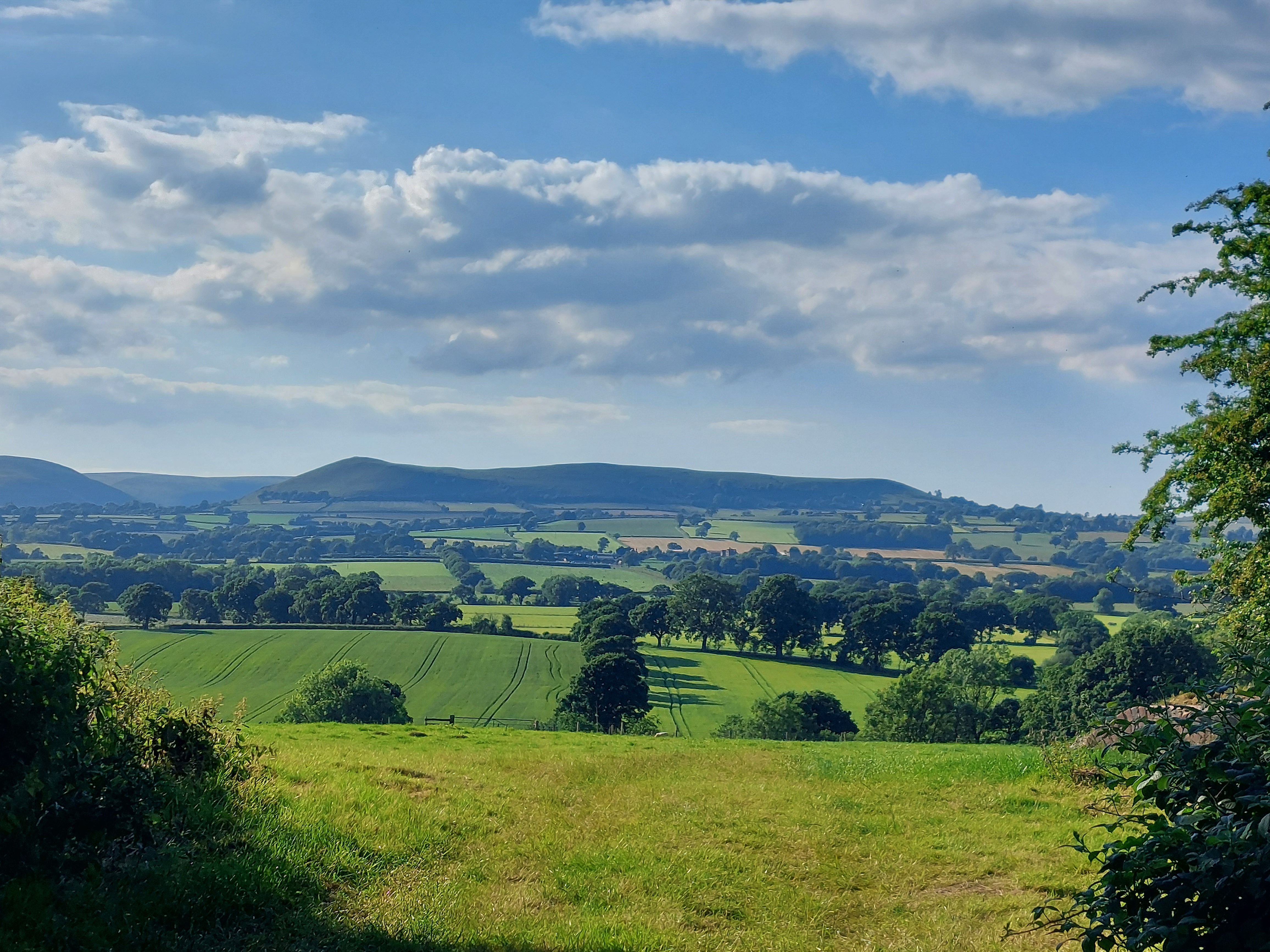 Okay, fine, one last beauty shot of the scenery, taken right before I got to camp. This is what people around here get to look at every day. Sure beats Ohio’s endless cornfields! 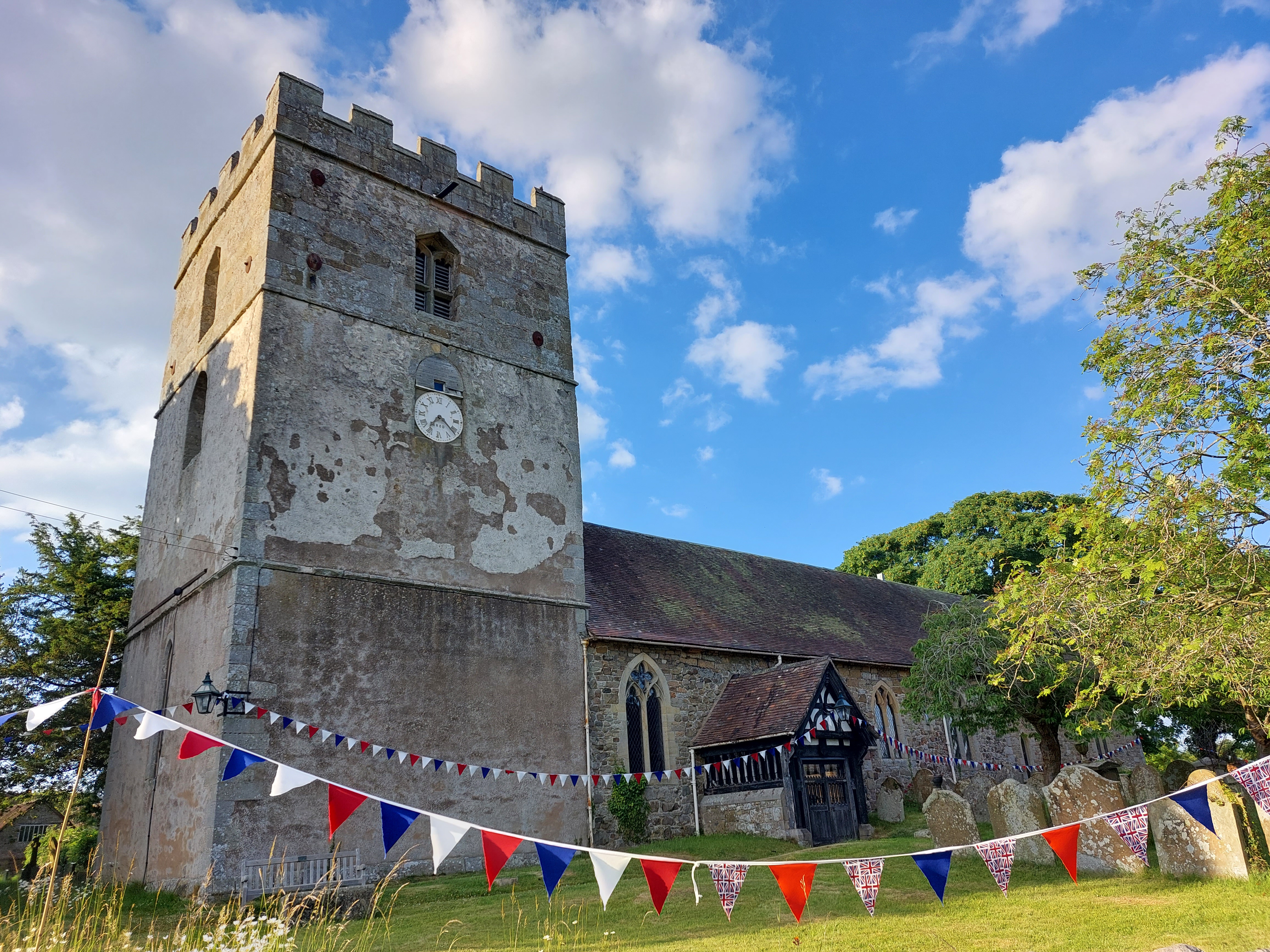 Oh yeah, almost forgot to include a church picture today. This was in the very last town I visited before getting to camp. 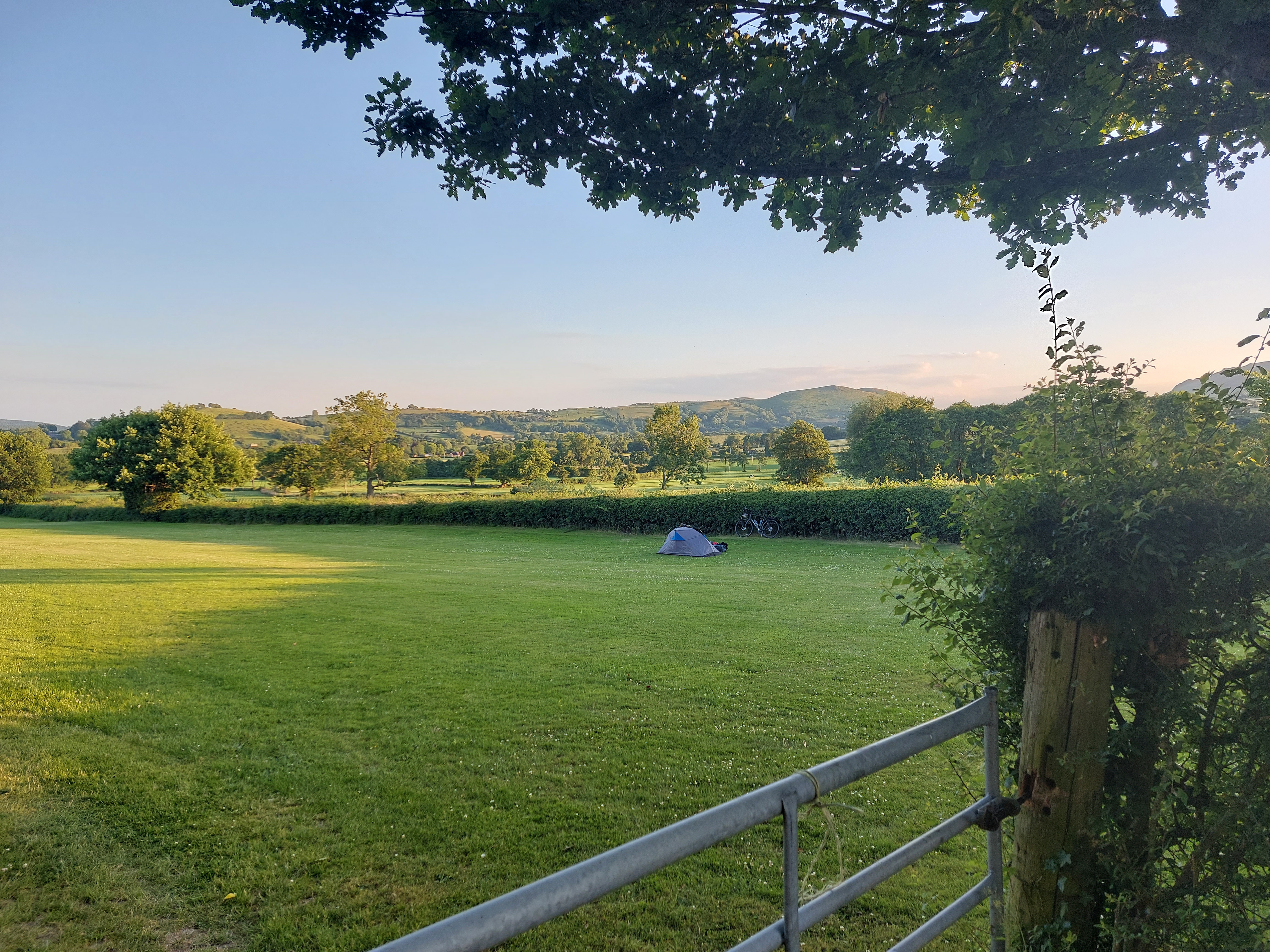 Once again my poor tent looks lonely out there on the big field all by itself, but this time at least there’s a reason...I was the only camper here! There were some RVs off to the left outside of the frame, but most were unoccupied (the owners leave them here, then come visit for a holiday a few times a year, or so I was told).

And that’s it for today...one more day of travel and then I should be in Liverpool.