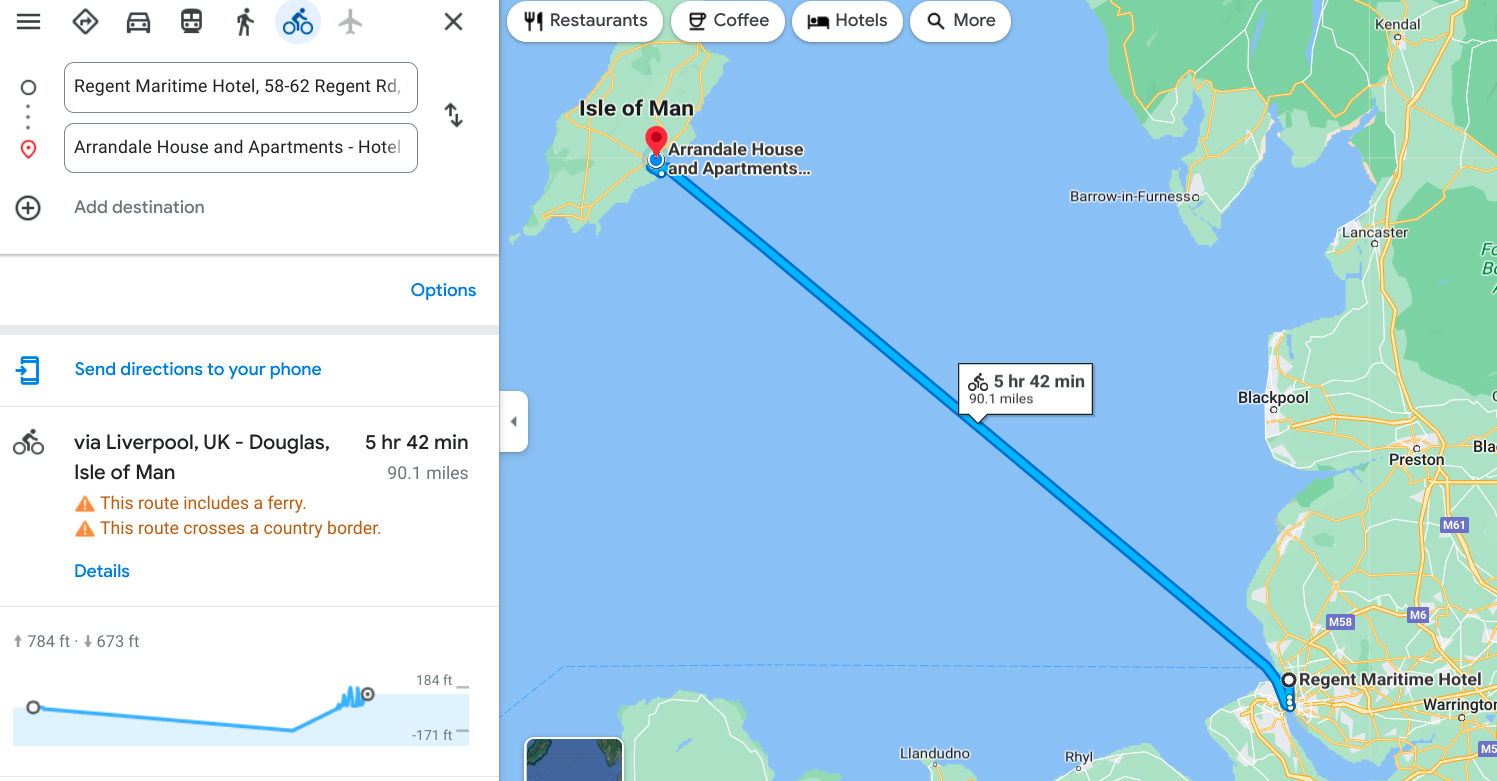 First off, pay no attention to the mileage on the map to the right, and only look at the terrain near the end because the rest of it is all a ferry ride of about 3 hours.

The Isle of Man, as you can see on the map here, is located between England and Ireland. It’s technically a separate country (it has its own currency just like Guernsey and Jersey) but part of the British commonwealth, sort of, I guess, in a confusing but acceptable way to everyone involved. Anyhow, the ferry line left from right on the coast next to downtown Liverpool and went straight to Douglas, the main town, where I spent the rest of the day riding around looking at local sights and finding geocaches. So basically this was a touring day, about as much of a “day off” as I’ll get on this trip seeing as I still managed to rack up about 20 miles and 500 or so feet of elevation in all that riding around. Having only about 5 hours to tour meant I couldn’t really range out too far, so I stuck to Douglas and retired early since I have an early morning ferry to Heysham tomorrow. (Heysham is near to Blackpool over on the coast to the east on the map, so as you can see, this trip cuts off a significant amount of riding up the coast as well.)

I had a good time here, if the weather was a bit on the cool and windy side. I feel like I only scratched the surface of what Isle of Man is all about, so perhaps another day I’ll return and spend a few days camping and biking around at a more leisurely pace, instead of watching the clock and having to hurry back to go to bed early. I also feel bad still about losing my opportunity to visit Ireland, but as it turns out, I went over the mileage for the rest of the trip and I might just be able to reach Edinburgh and still make it back to London by the night of the 6th. I couldn’t possibly do that if I’d gone to Ireland as well, so one of the two was getting cut off either way. I guess I should’ve spent another week here, right?

Anyway, on to today’s photos... 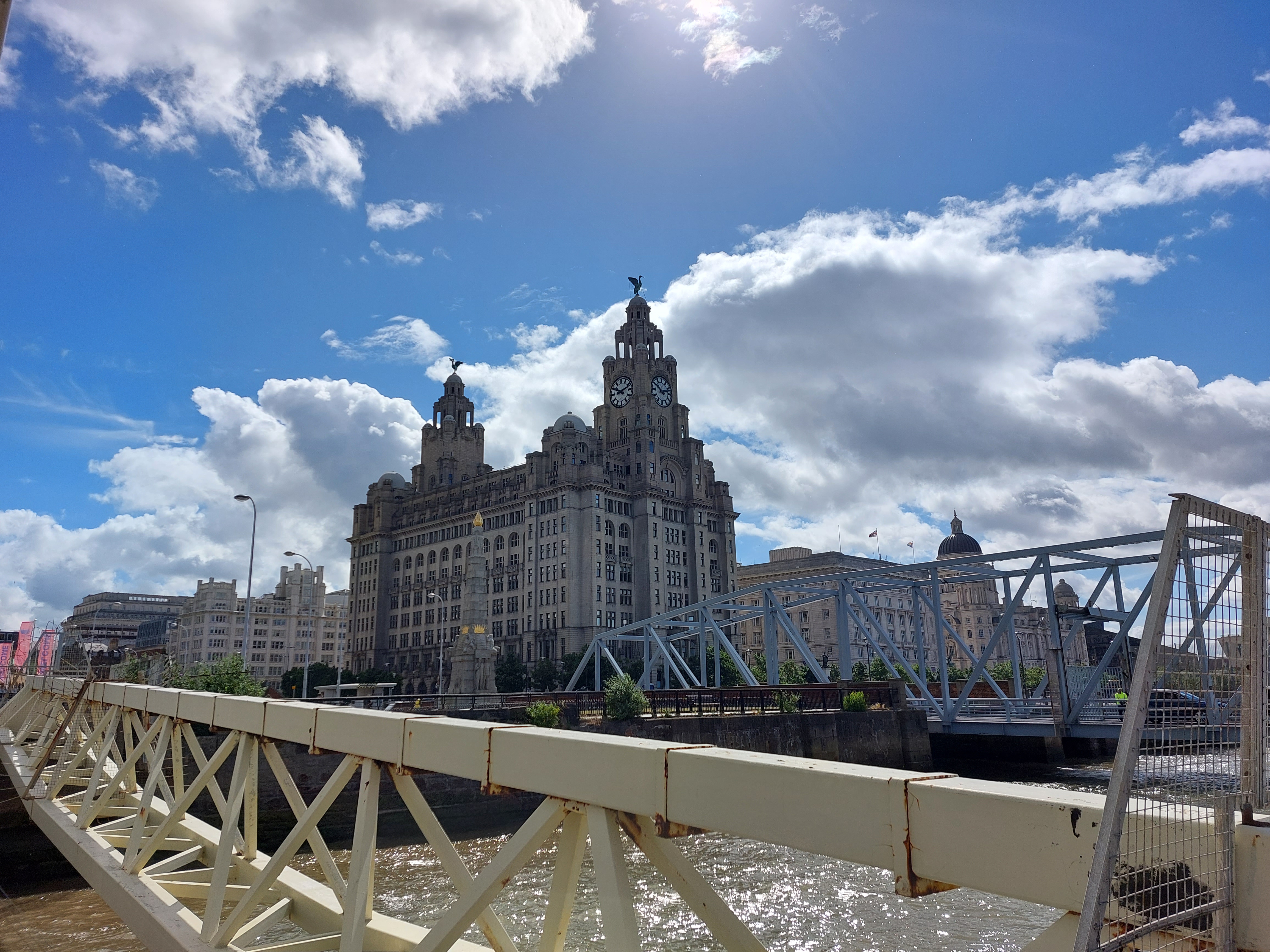 Here’s another look at Liverpool, from the waiting area outside the ferry. 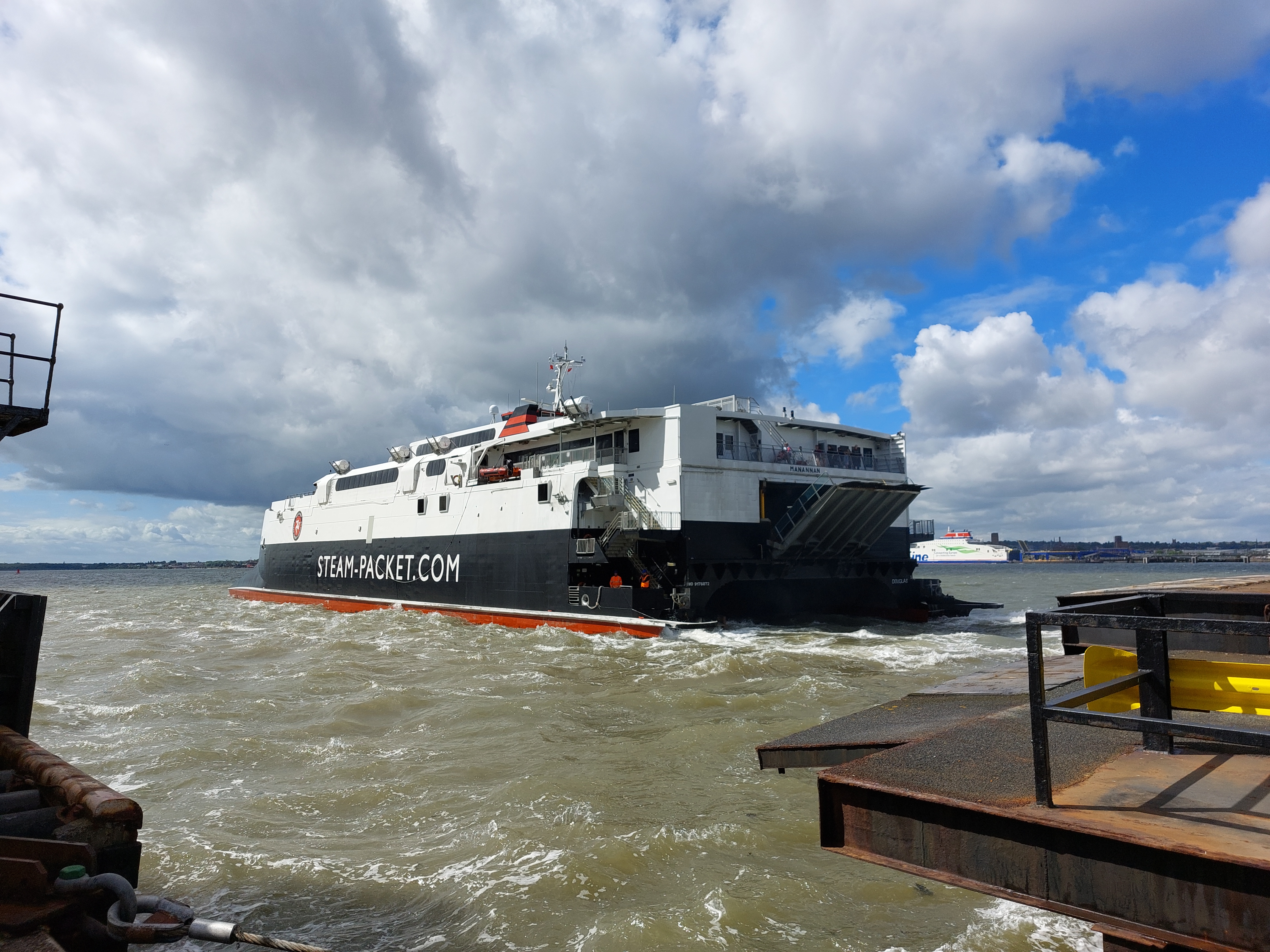 And here’s the ferry now. The seas sure are rough out there, I hope it has no trouble docking. 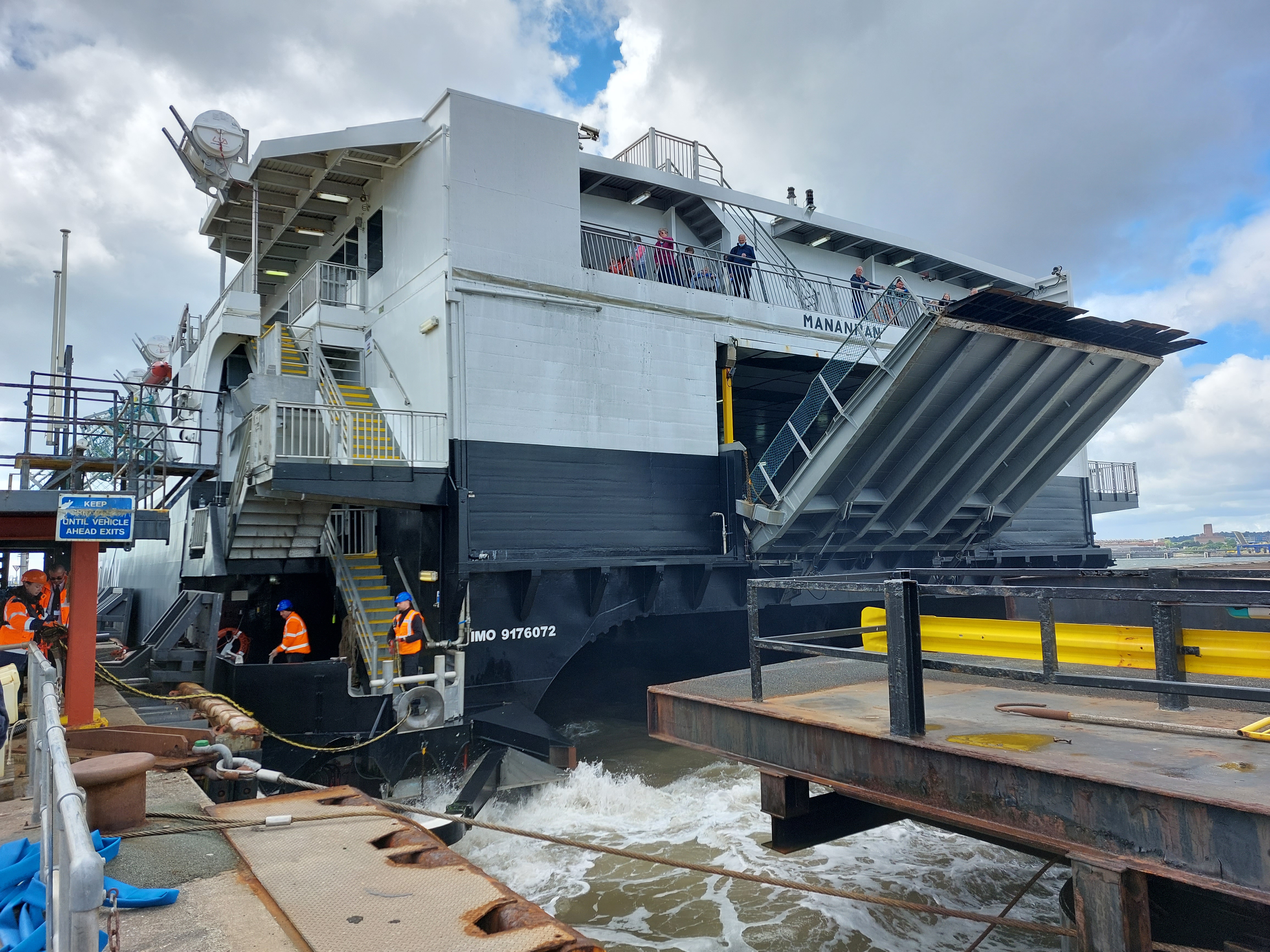 Nope, no problem at all. Within minutes it was secured to the dock and that ramp came down, whereupon cars started to drive off and continued to do so for about 15 minutes. I would not have enjoyed driving my car off that narrow ramp on the steadily bouncing dock, I can assure you. 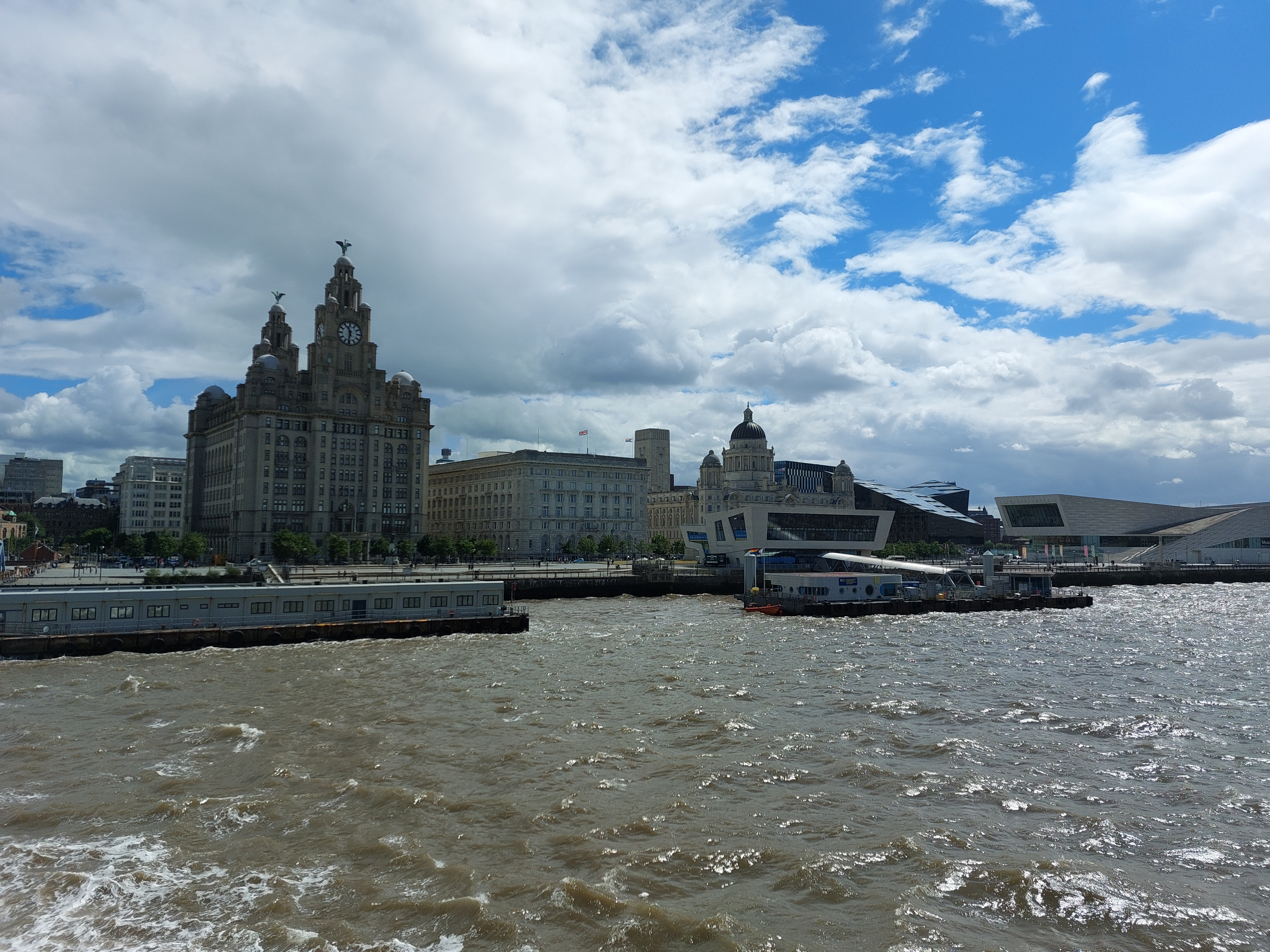 And here we go sailing off to the Isle of Man. This is a much better picture of Liverpool than any of the others I took, I think. 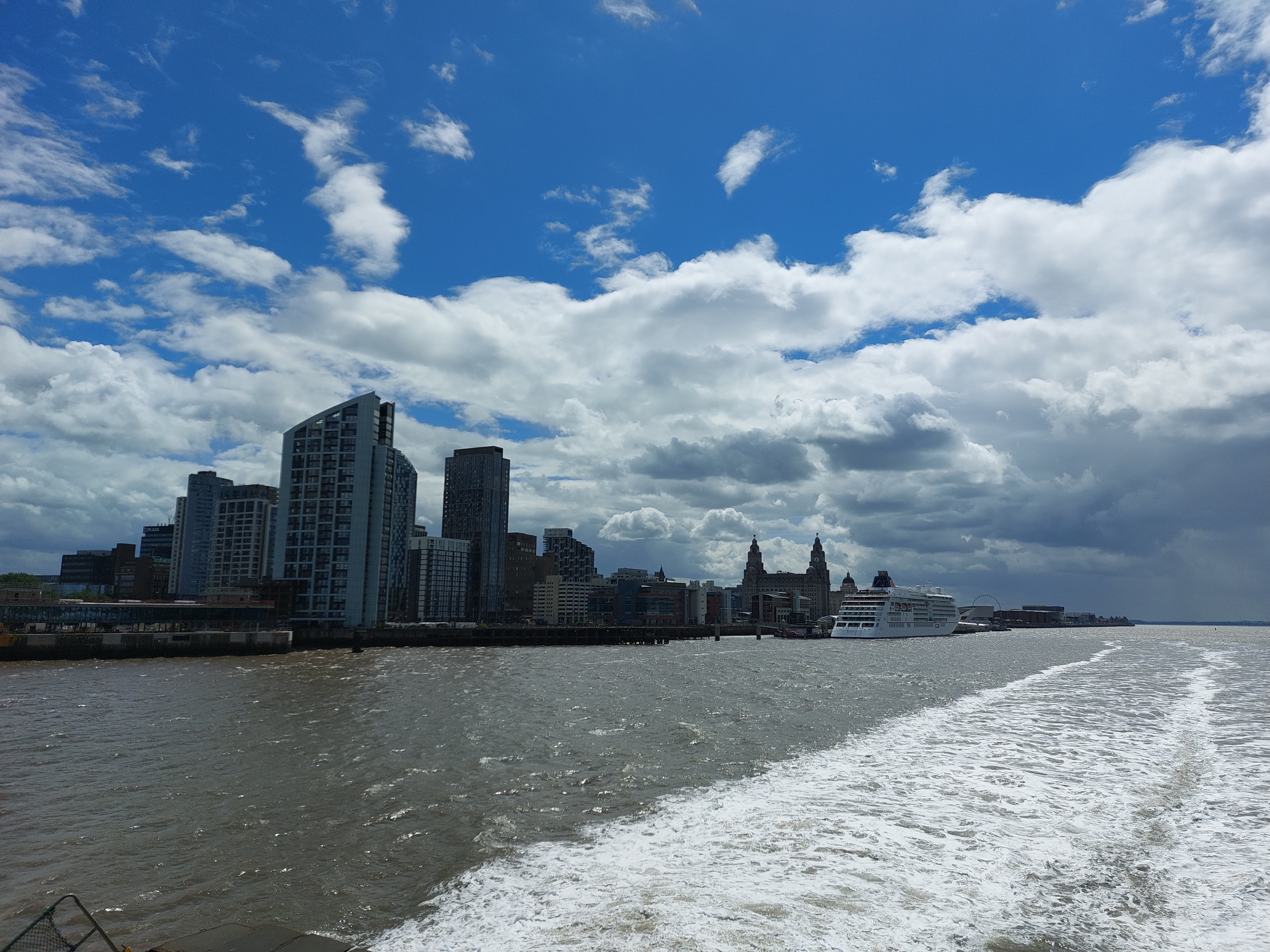 And off we go leaving Liverpool behind. I won’t be back this trip as the return ferry goes to Heysham instead. Oh and yep there was a cruise ship docked...the Europa 2, from a German cruise line I’ve never heard of. 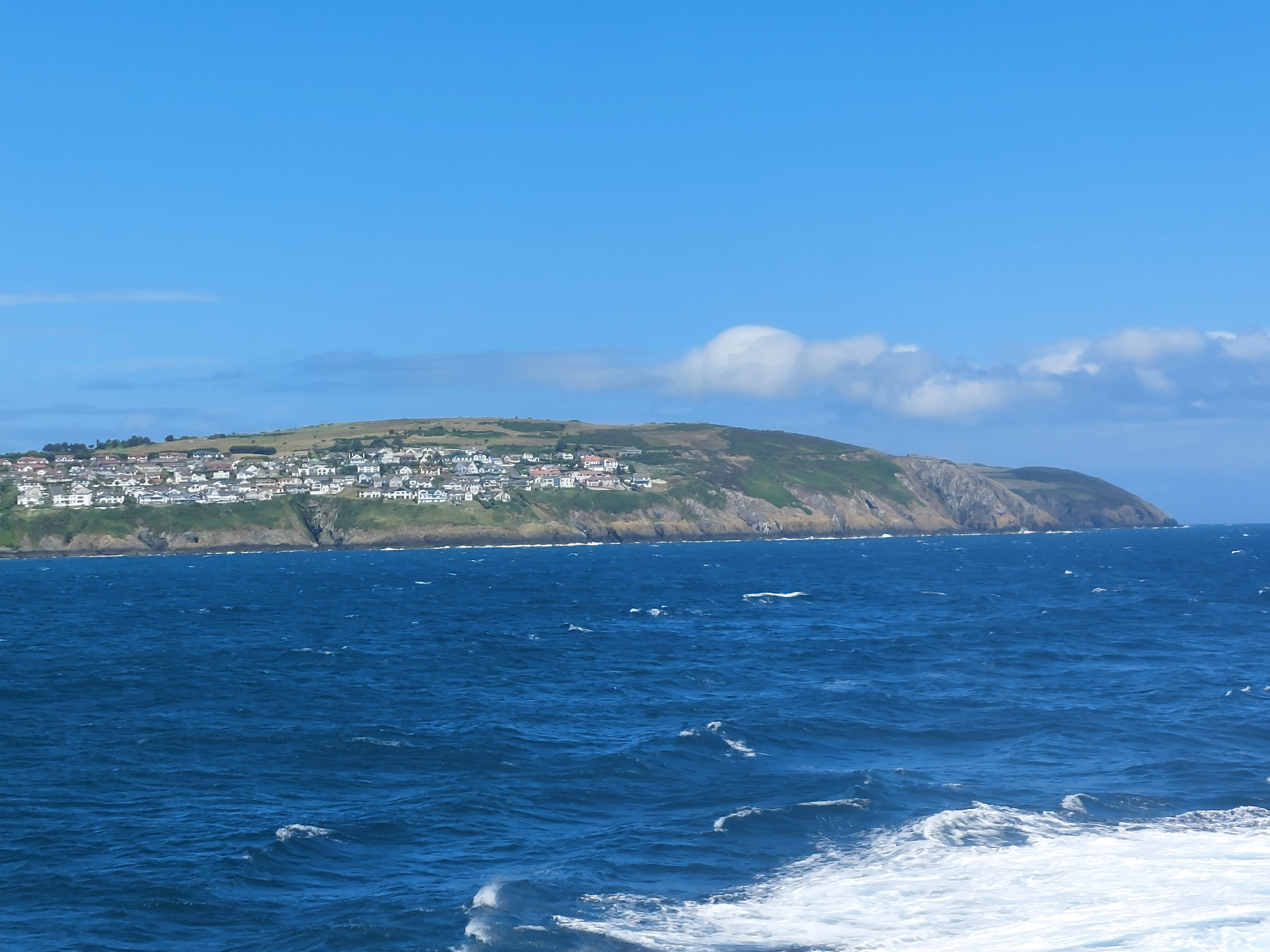 My first look at Isle of Man....I like how the houses just kind of stop there along the edge of the hills. 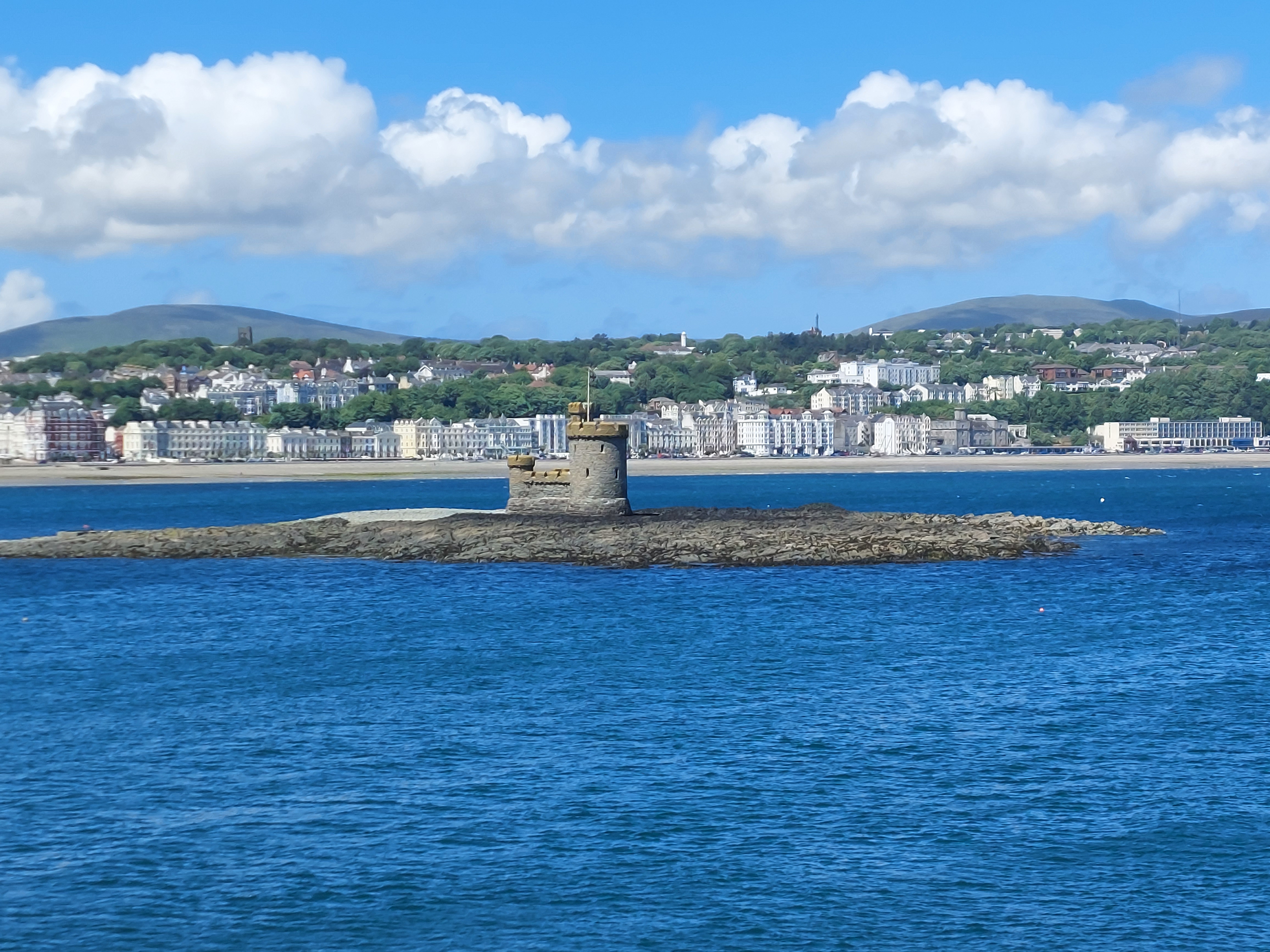 As you sail into Douglas harbor there’s this cute little mini fort sitting out there to welcome you. 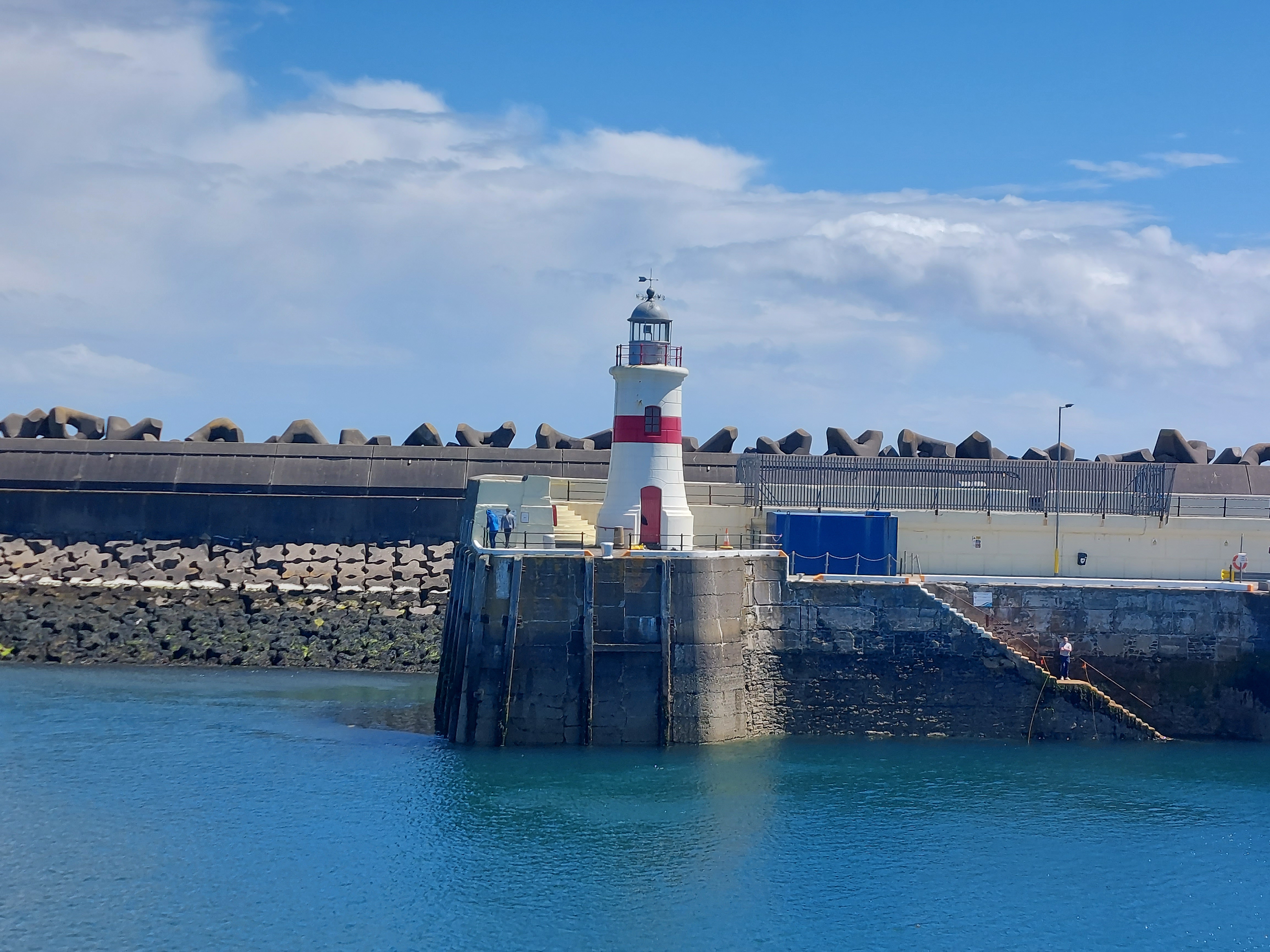 Not to mention a cute little lighthouse just off to the side of the docking port. 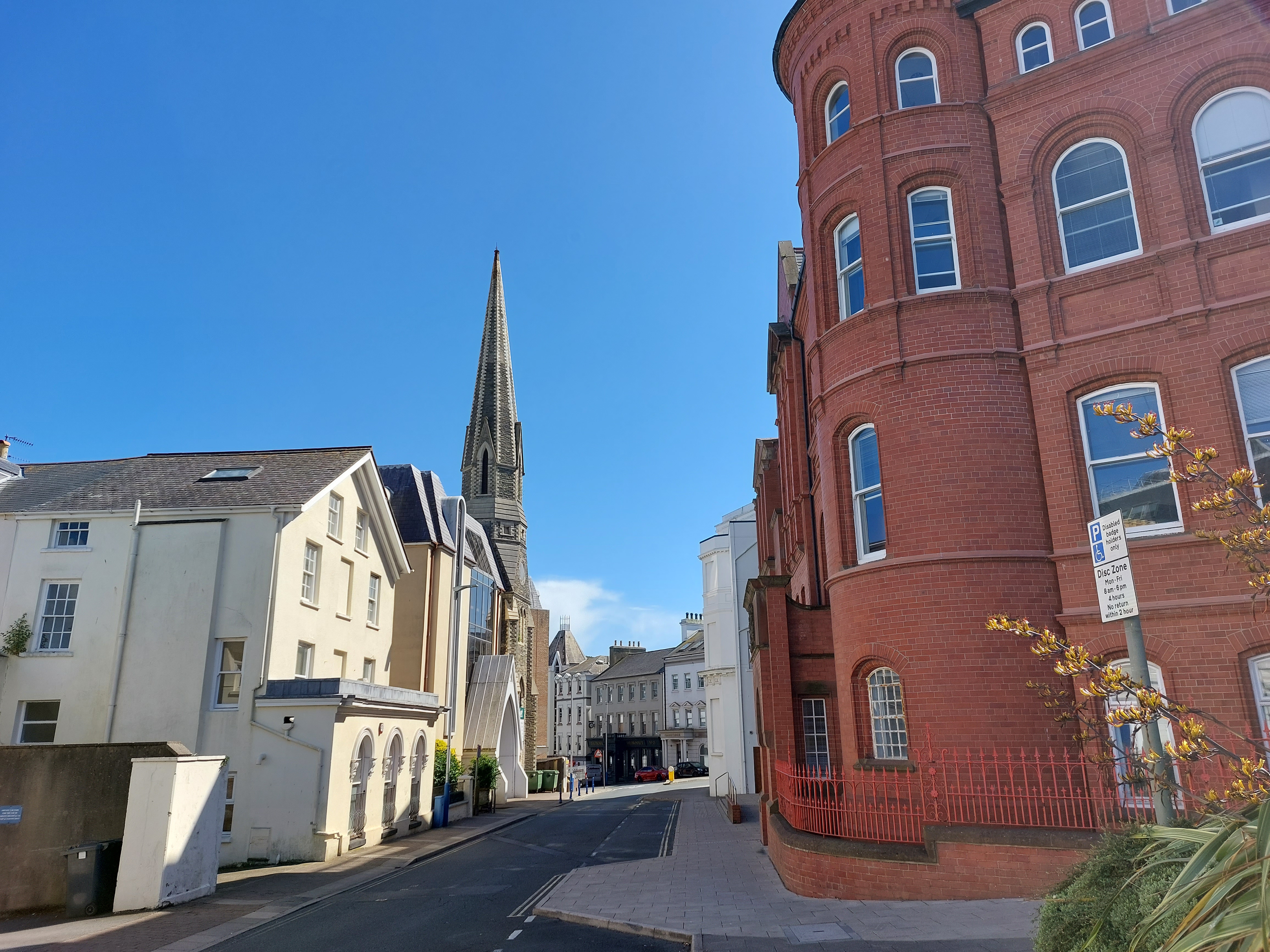 Here’s what some of the town looked like. I got this picture on my way to the hotel. Of course I immediately went to check in and drop off all my gear, so I wouldn’t have to lug it around with me all day. 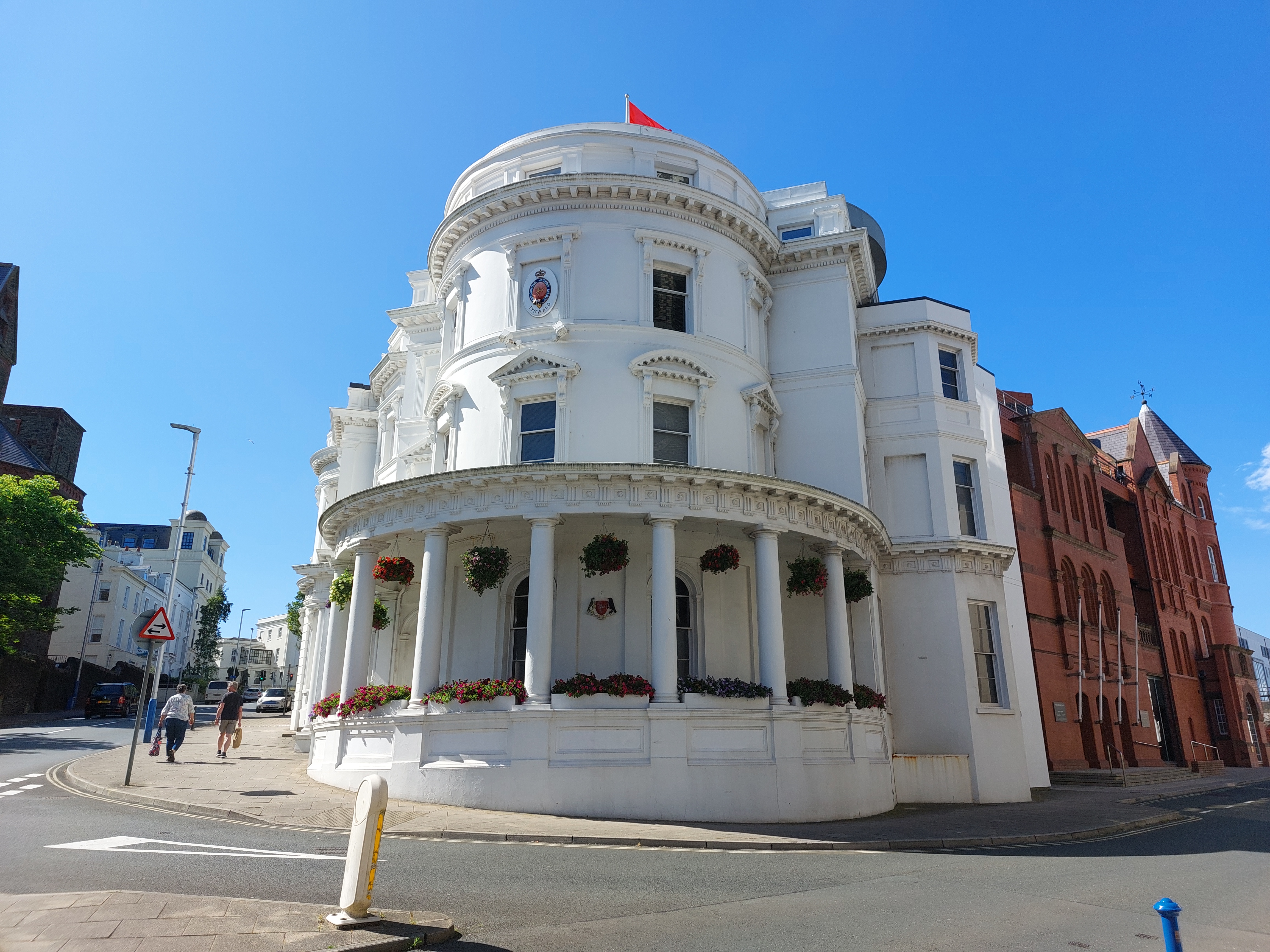 This is the legislative centre of Isle of Man, a building known as the “wedding cake” for obvious reasons. 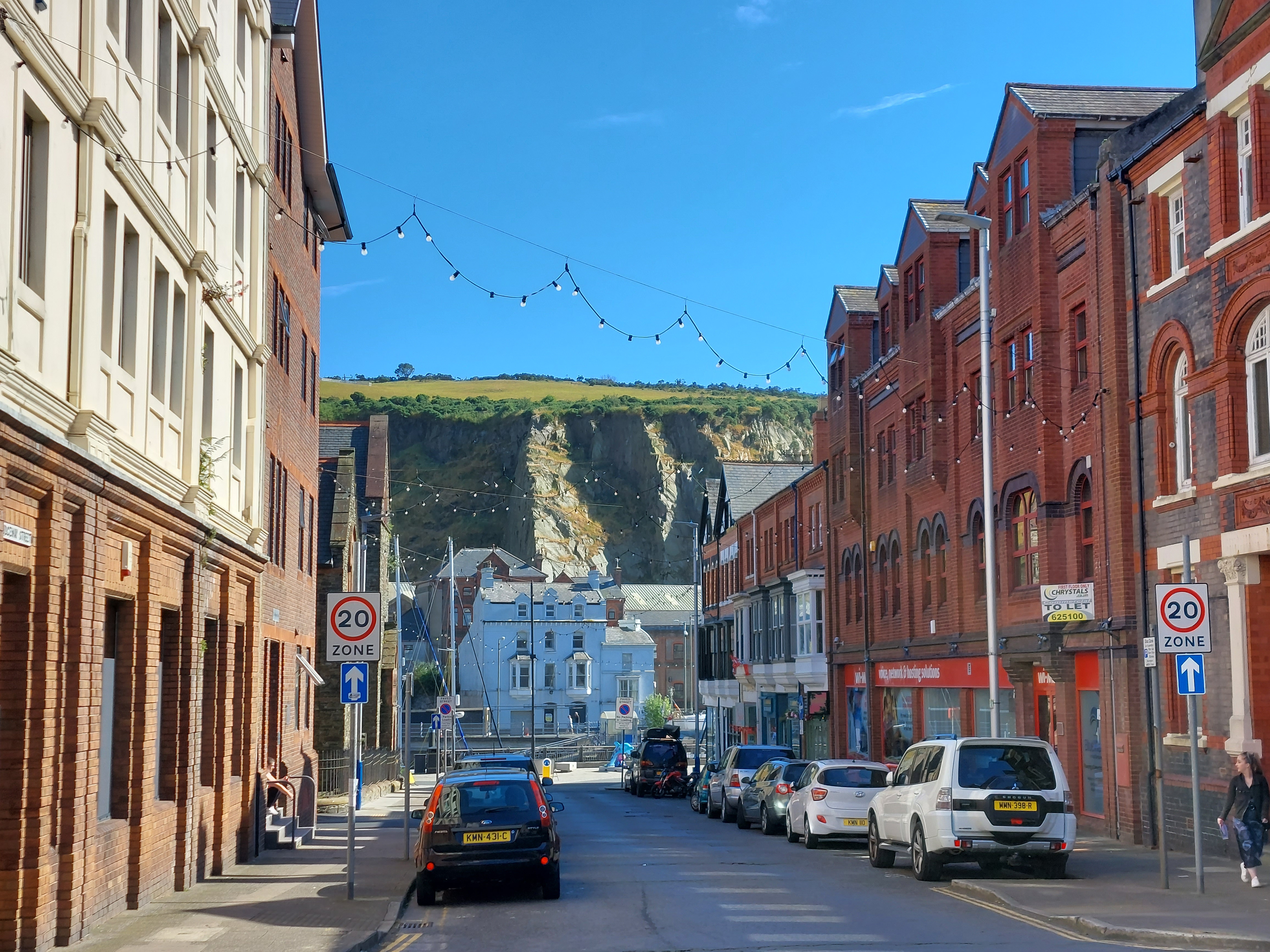 I ran across this view while riding through town. The buildings just kind of end there with a huge cliff rising up behind them. 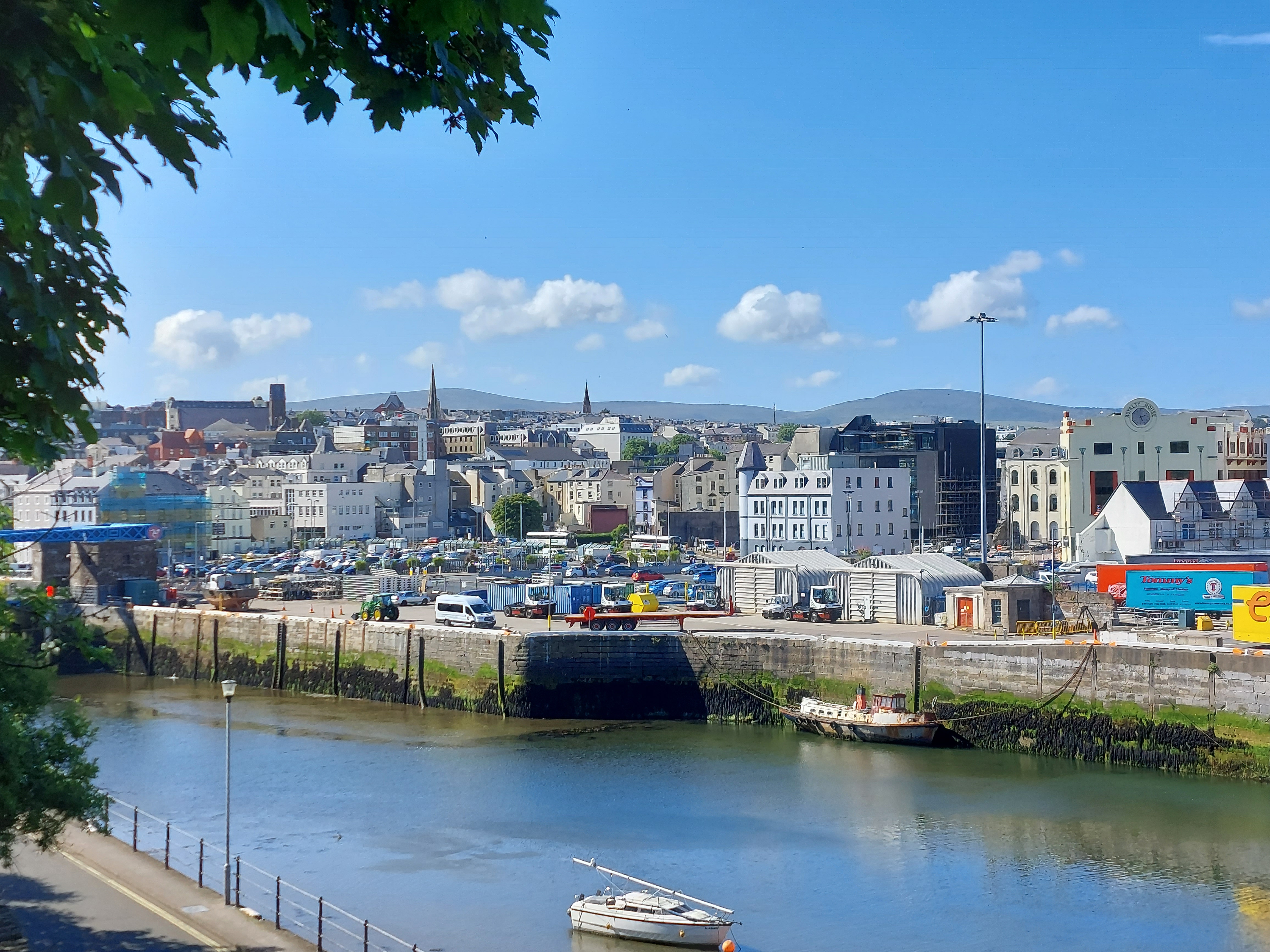 A nice view of town from a hillside overlooking the quay. 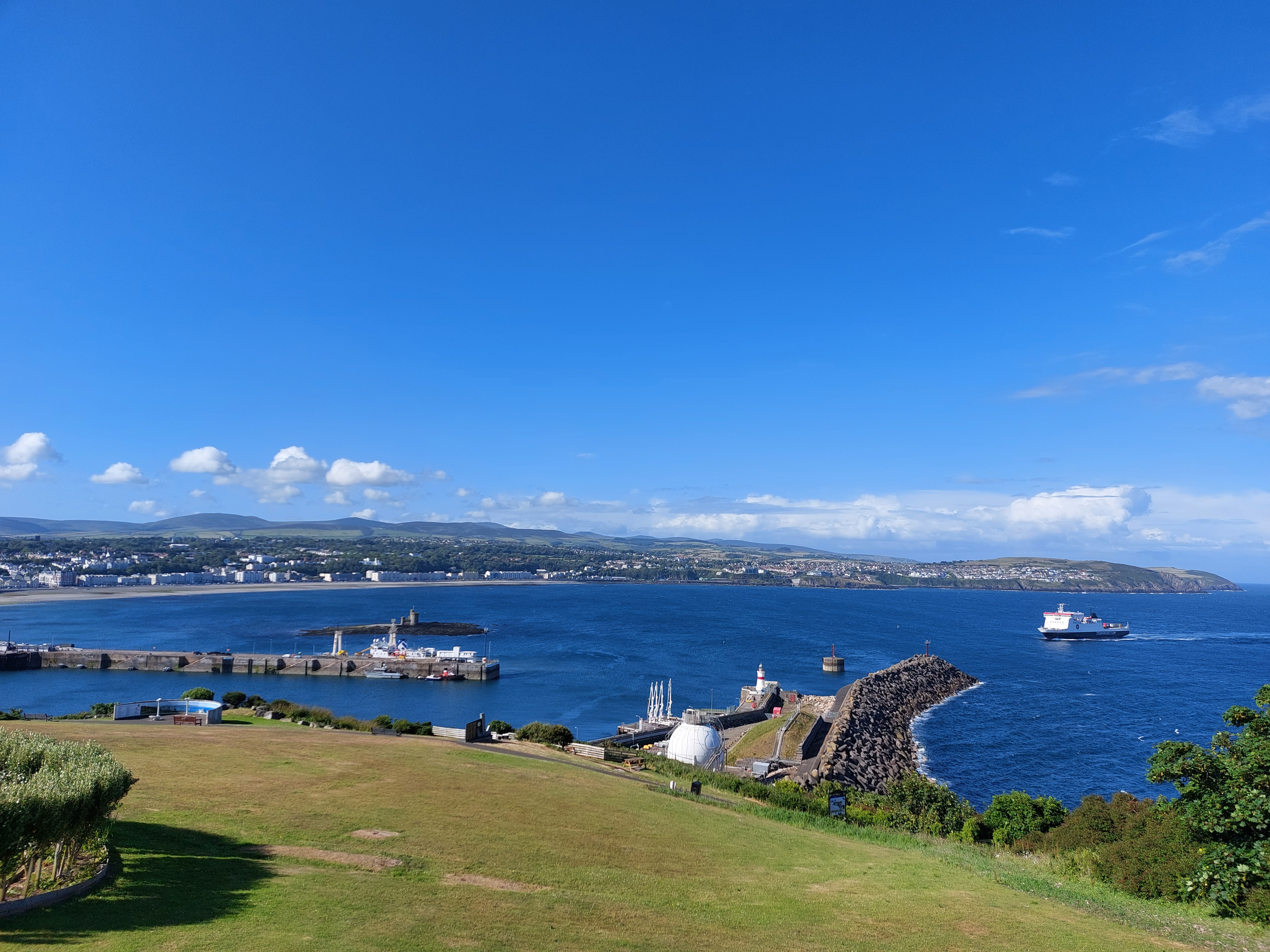 I climbed on up higher and got an even better view, and with some luck managed to catch one of the ferries coming in (the same line I was on, so probably the one returning from Heysham that I’ll be on tomorrow). 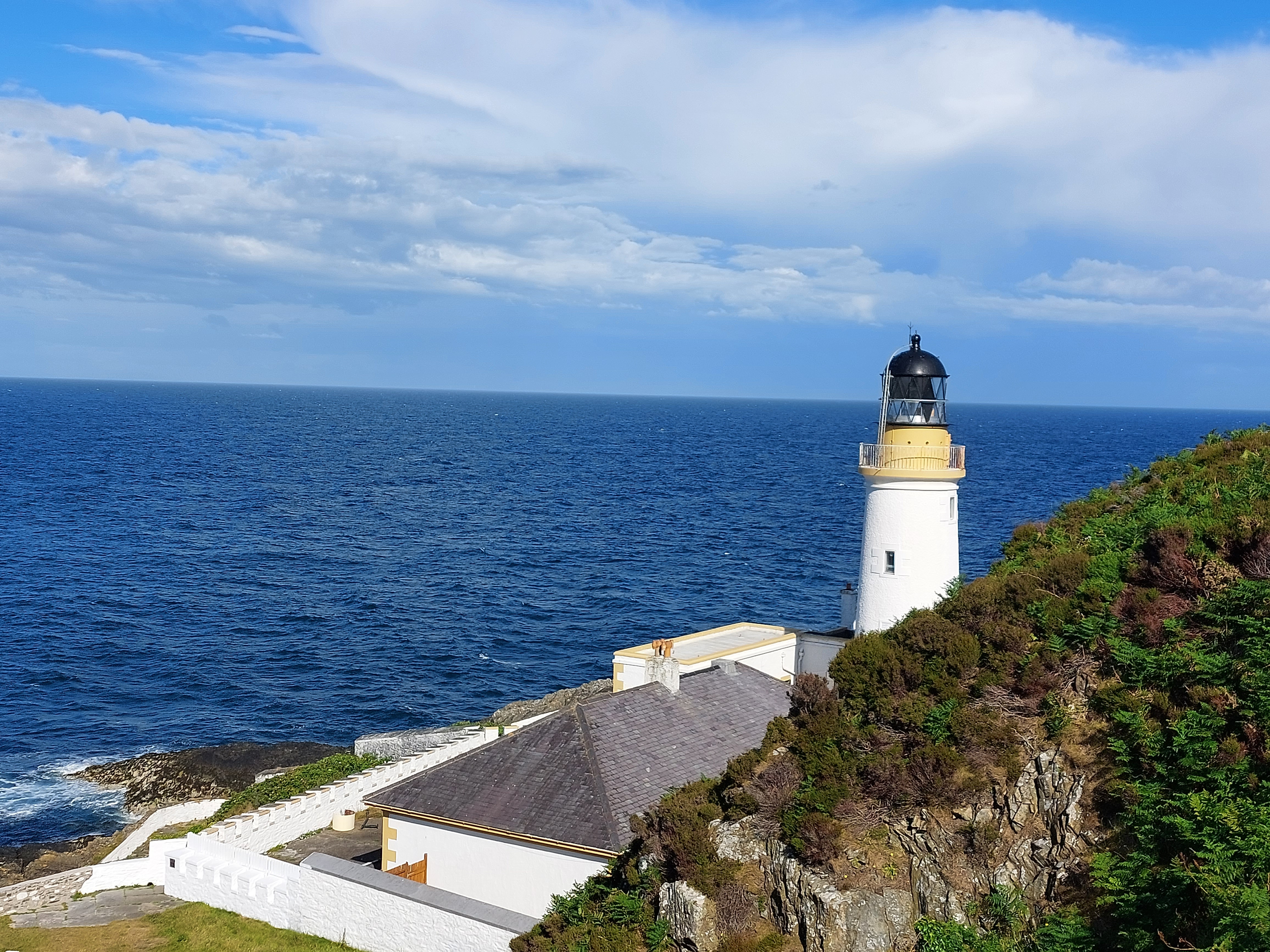 Around the corner of the hill there (to the right on the previous photo) is a much cooler lighthouse. Here’s a view of it from one angle. 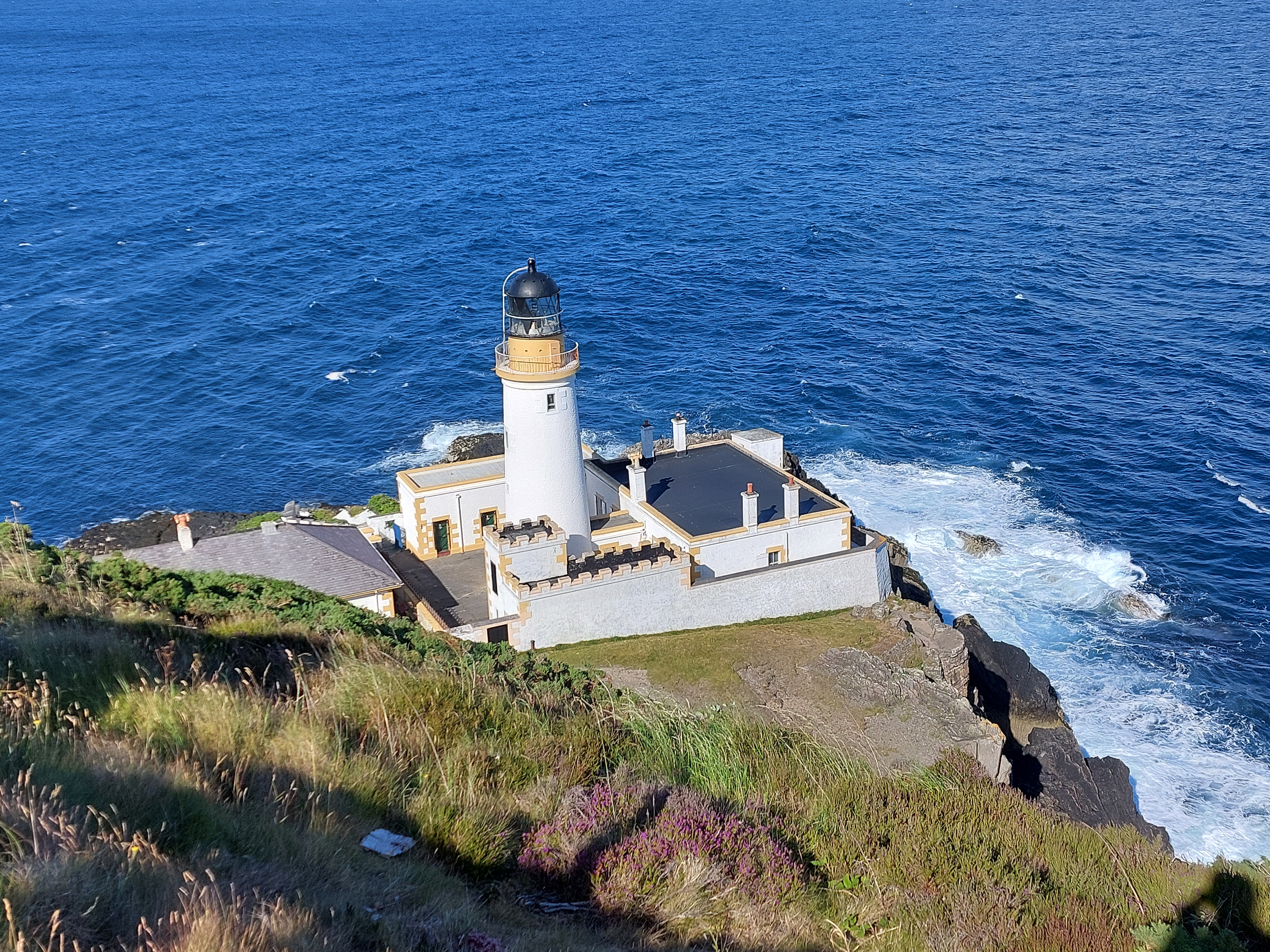 And here it is from another angle. It’s still working today, but totally automated of course. 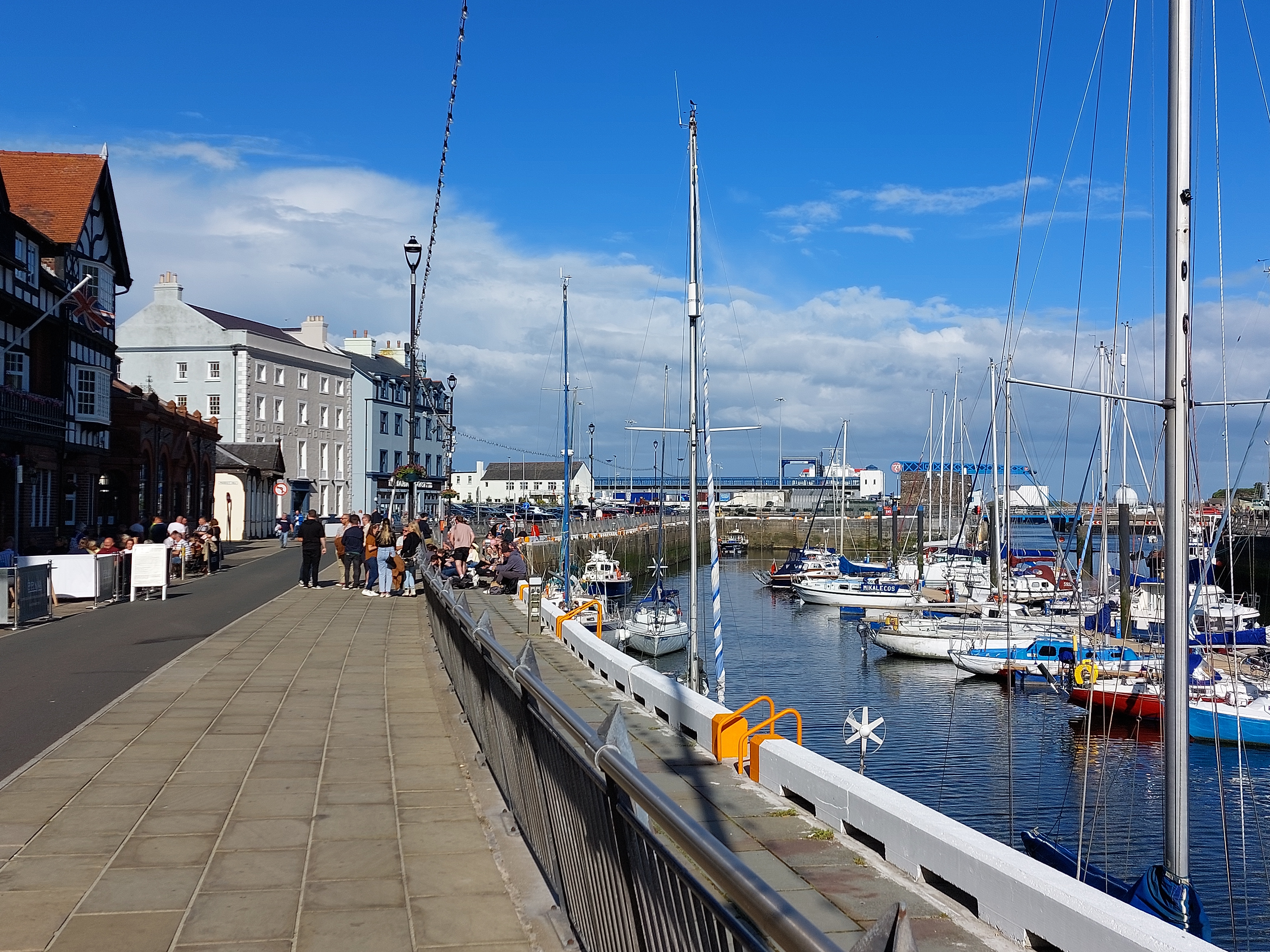 Heading back into town, I rode along the quay a bit and they sure do pack the boats in, don’t they? 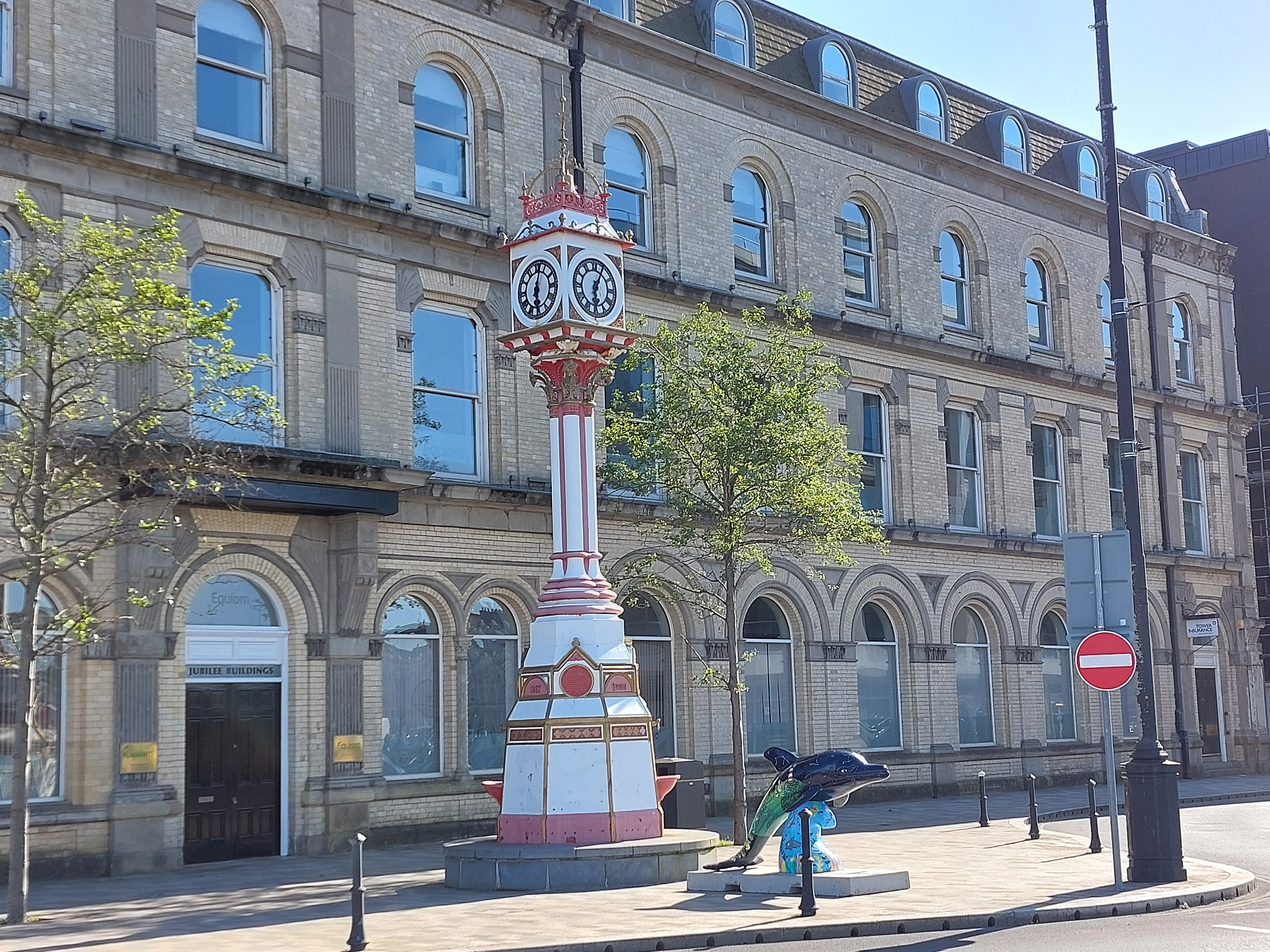 Here’s a cool display of a clock and dolphin that I believe were placed here to commemorate a visit from Queen Victoria (at least the clock was, not sure about the dolphin). 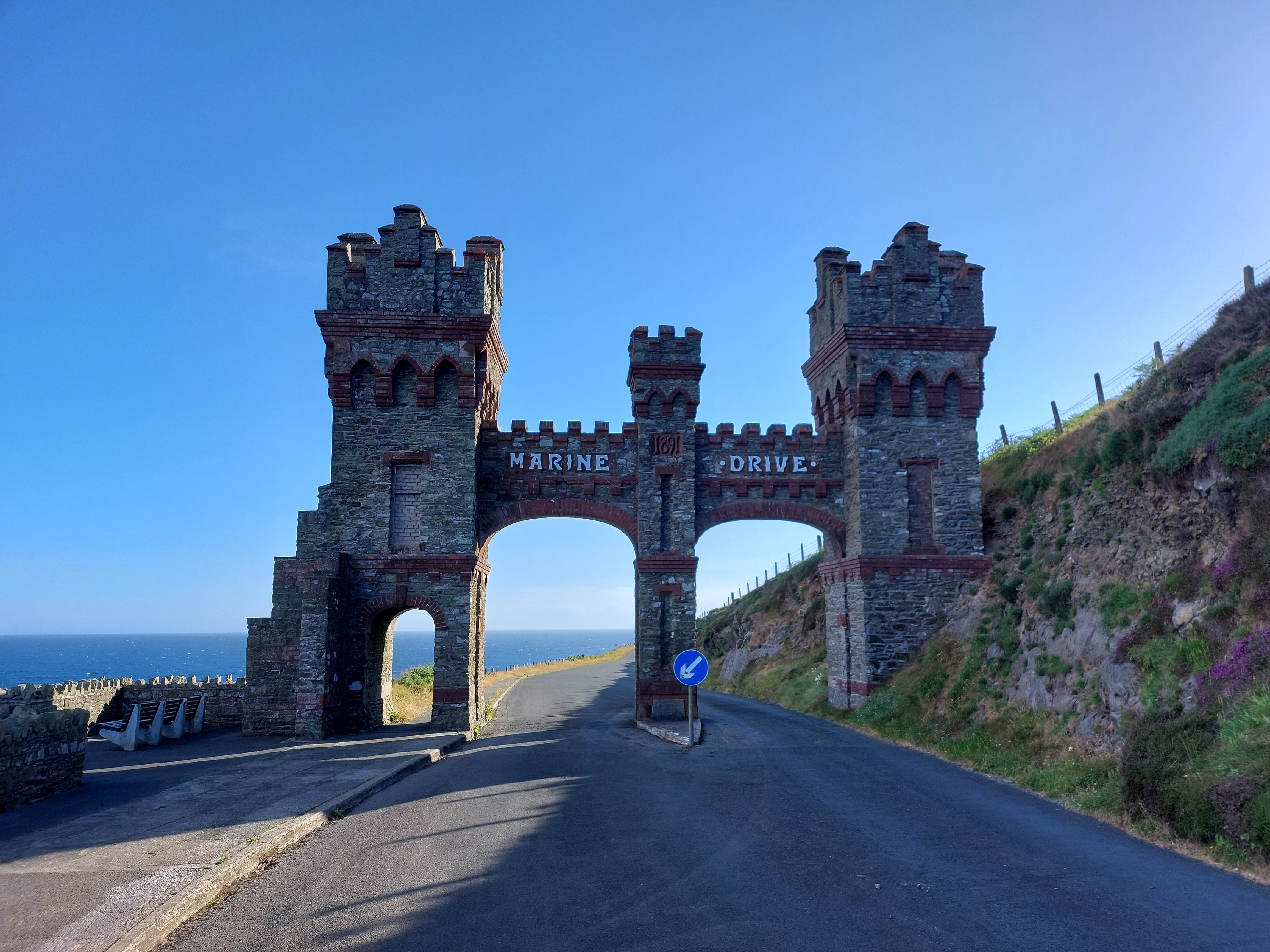 If you go on out around the town to the south you end up on this road along the high cliffs there. This was the limit of how far I was able to get today. 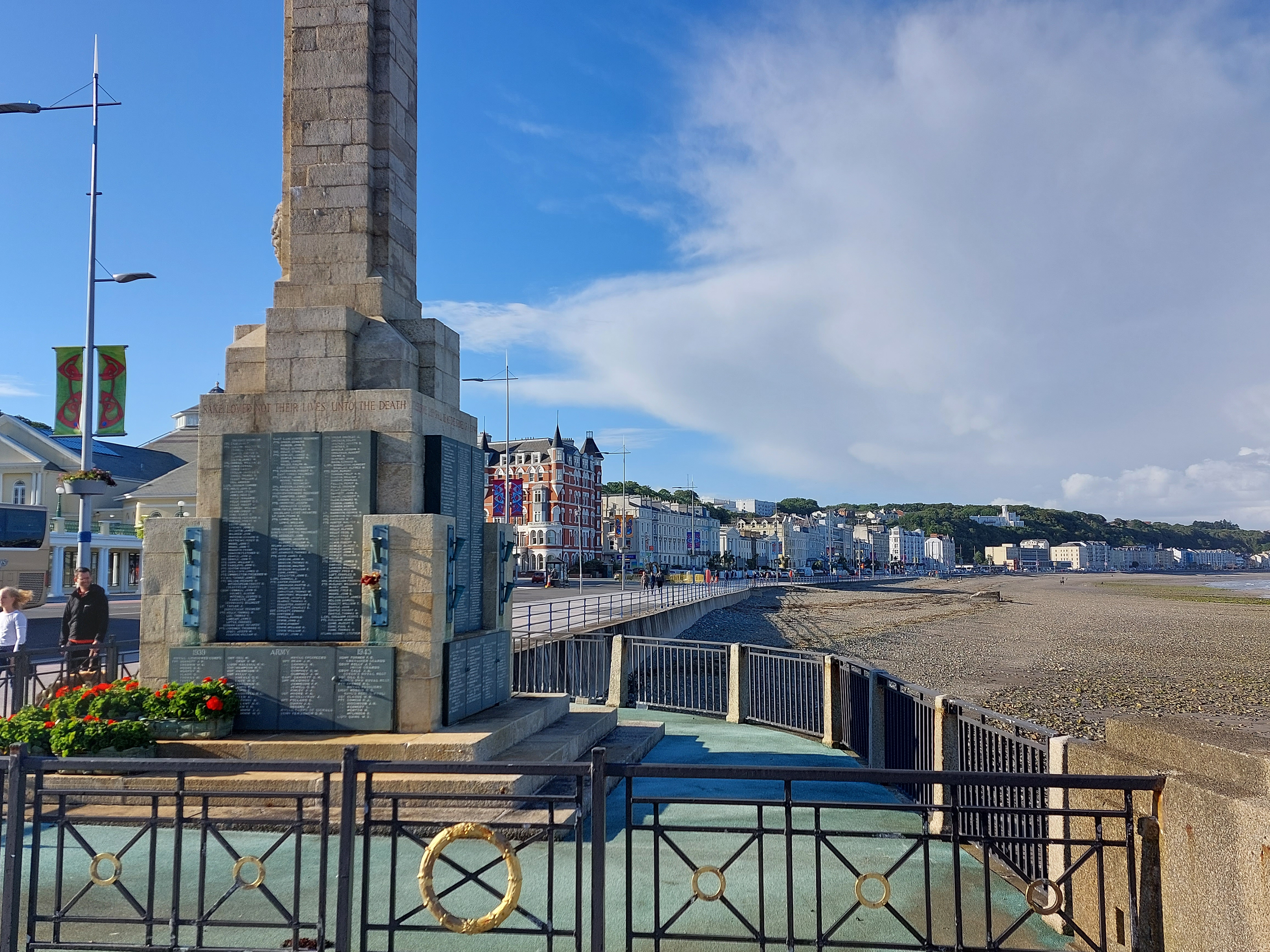 So here’s one last look at Douglas as I head to the hotel. Notice how once again I managed to visit at low tide...I’m really good at that, apparently. 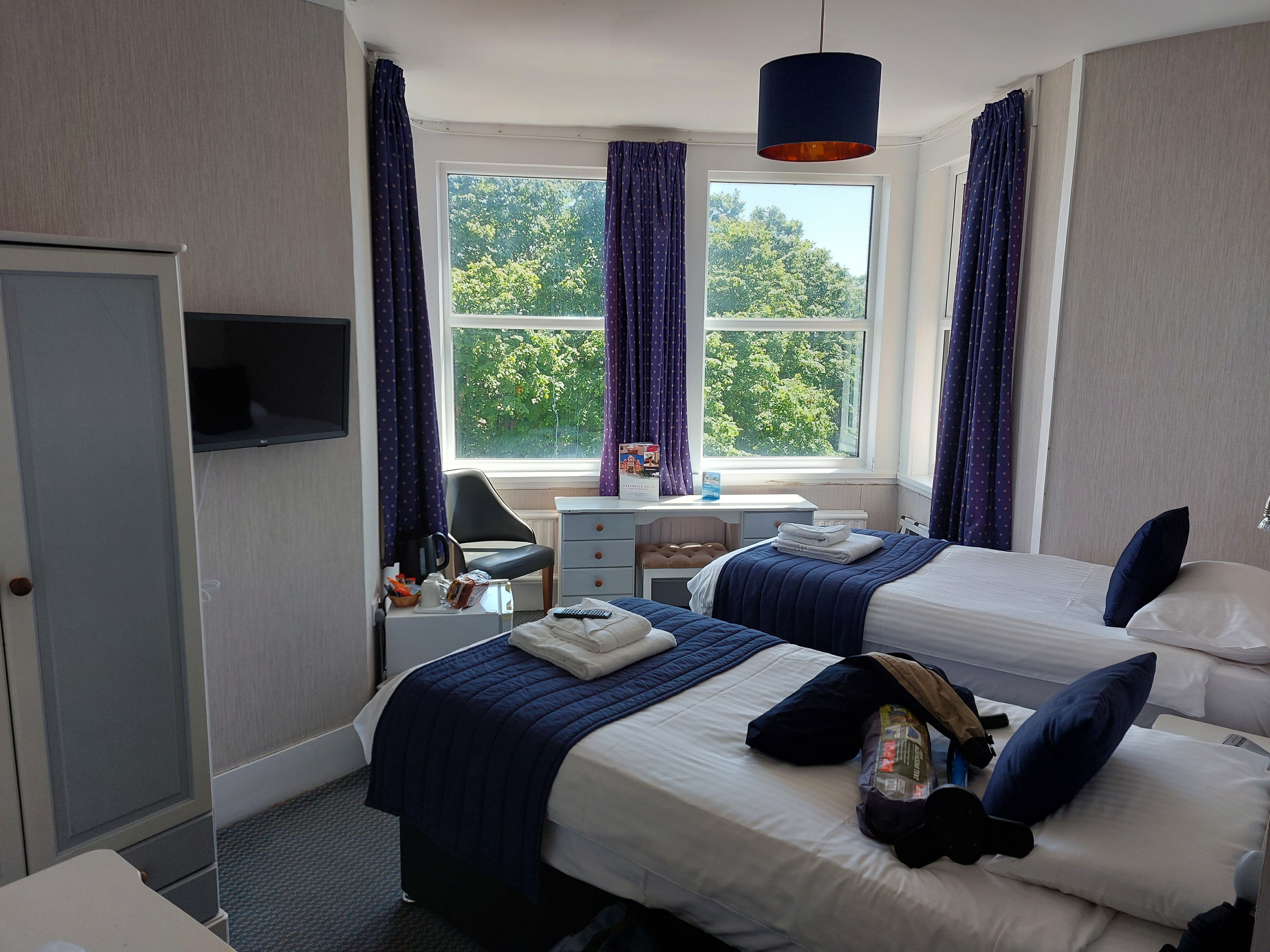 My hotel tonight is a 19th century Victorian building with very nice (but small) rooms and huge windows overlooking the town and harbor. Seriously, what a view! I probably won’t enjoy such a thing like this again this trip. Tomorrow it’s back to hard riding as I head north toward Scotland.