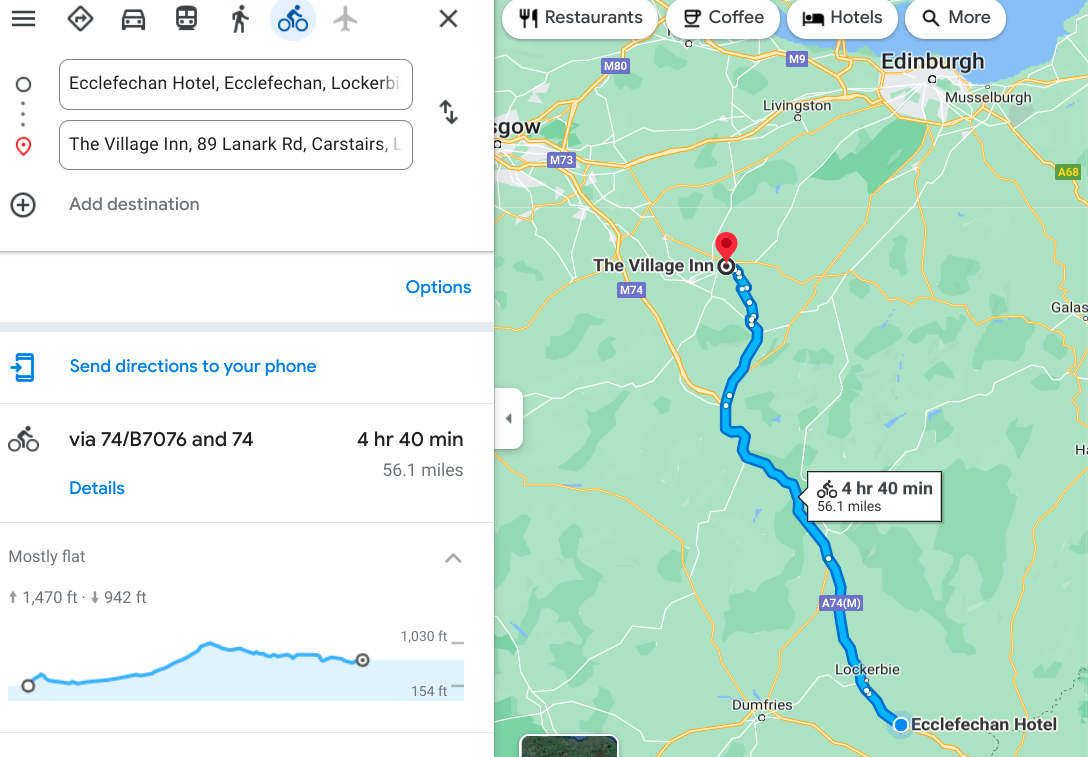 Remember yesterday when I didn’t want to get out of bed? Today was another one of those days...the forecast was for cold weather and lots of rain. At least there were tailwinds (I can’t imagine trying to make today’s ride if those were headwinds) but quite often they just kept me cold and miserable along with the rest of the weather. There wasn’t much to see, either, as I followed the motorway most of the day and cut across farm country near the end as I angled in the general direction of Edinburgh (which I should bike through tomorrow).

The route took me first through Lockerbie, which some of you older readers might remember as the site of a plane crash back in the 80s. I took a brief diversion to go into town there but didn’t see anything about the incident, which I think took place out in the countryside somewhere. Shortly after that the rain began so I just slowly pedaled north along that uphill slope you can see on the terrain map to the right. This was a long, slow grind of something close to 15 total miles of climbing, starting out not too bad but gradually getting steeper all the way to just a few miles short of Abingdon.

I have to admit I was starting to get discouraged a bit and as I zoned out thinking about warm hotel rooms and nonexistent sunshine, someone suddenly spoke to me...another cyclist out on tour, a lone female rider from London named Harriet. She had a very light road bike with only a couple of panniers and was thus way faster than me, but she lingered for about an hour as we chatted endlessly about our biking adventures. Then as we finally crested the last of the major climb, she took off and left me in the dust. See, my problem is I’m just carrying too much gear and too much weight and I need to lose about 20 years, then I could’ve zipped off like that too! She was on her way to Glasgow so our paths diverged in Abingdon and I likely won’t see her again, but if she’s reading this blog, thanks for giving me someone to chat with and lifting my spirits a bit on what was otherwise a wet, miserable day.

I actually made good time despite the weather, partly because of that tailwind, but mostly because I just didn’t want to stop for fear of getting too cold and starting to shiver my way into hypothermia. I had a sandwich in my hotel before leaving at about quarter till 11, and rolled into the hotel a little after 6pm, which is about the fastest I’ve done a full day’s riding this whole trip. I did stop for a few geocaches, but not many, and only ones I knew I could find within a minute or so...anything longer and I rode on for fear of cooling off. I didn’t even risk taking the time to fix a sandwich and waited until I got to the hotel to have a big dinner, finishing off three sandwiches’ worth of meat and cheese in one sitting. A hot shower afterward felt wonderful, and I’ll probably go to bed early as soon as I finish typing this. But first, on to the pictures...not much to see today, I’m afraid... 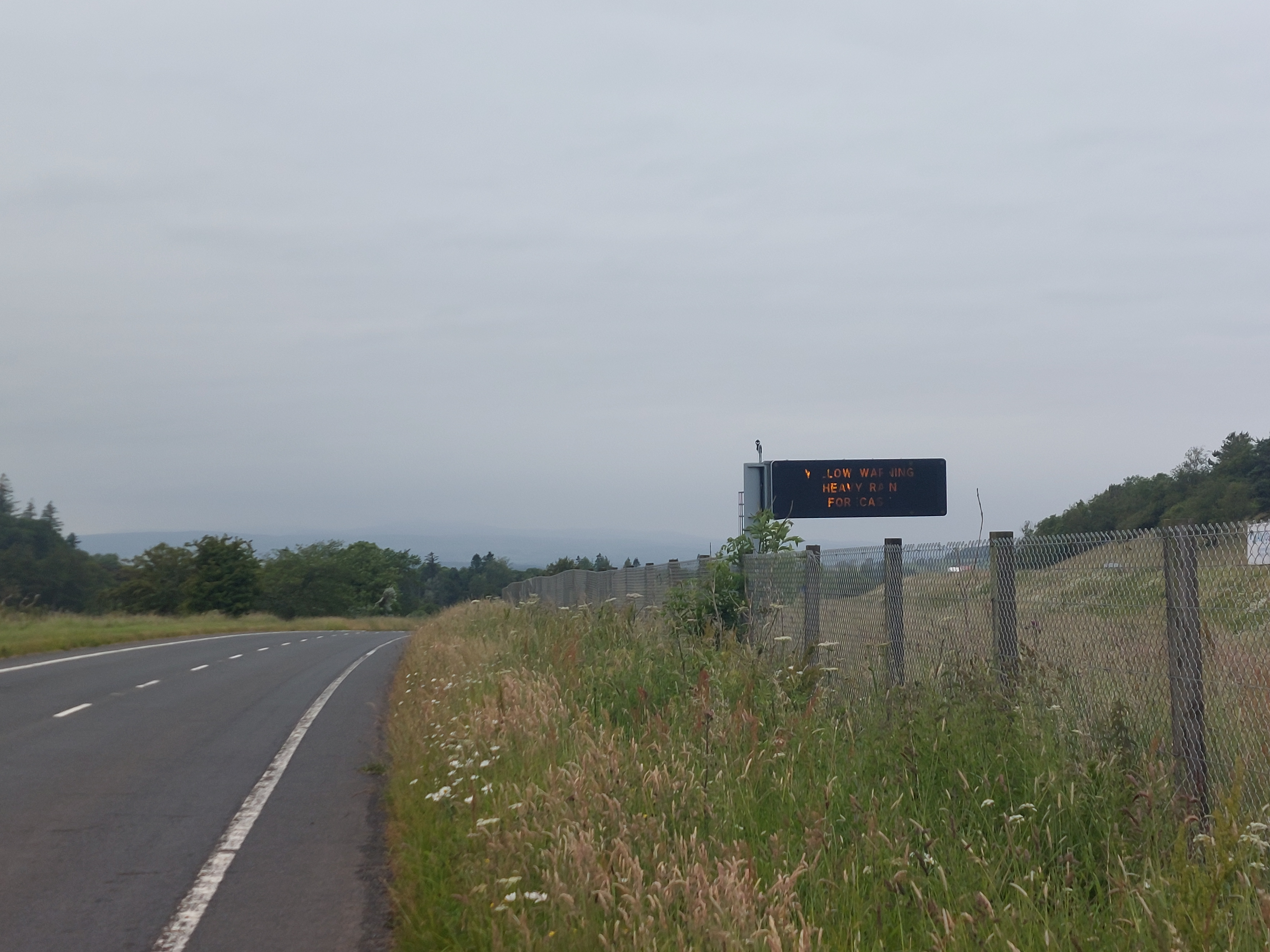 Most of the ride followed the motorway, and sometimes I could catch signs over there, including this not-too-encouraging sign that says, “Yellow Warning – Heavy Rain Forecast.” Great, just what I wanted to see... 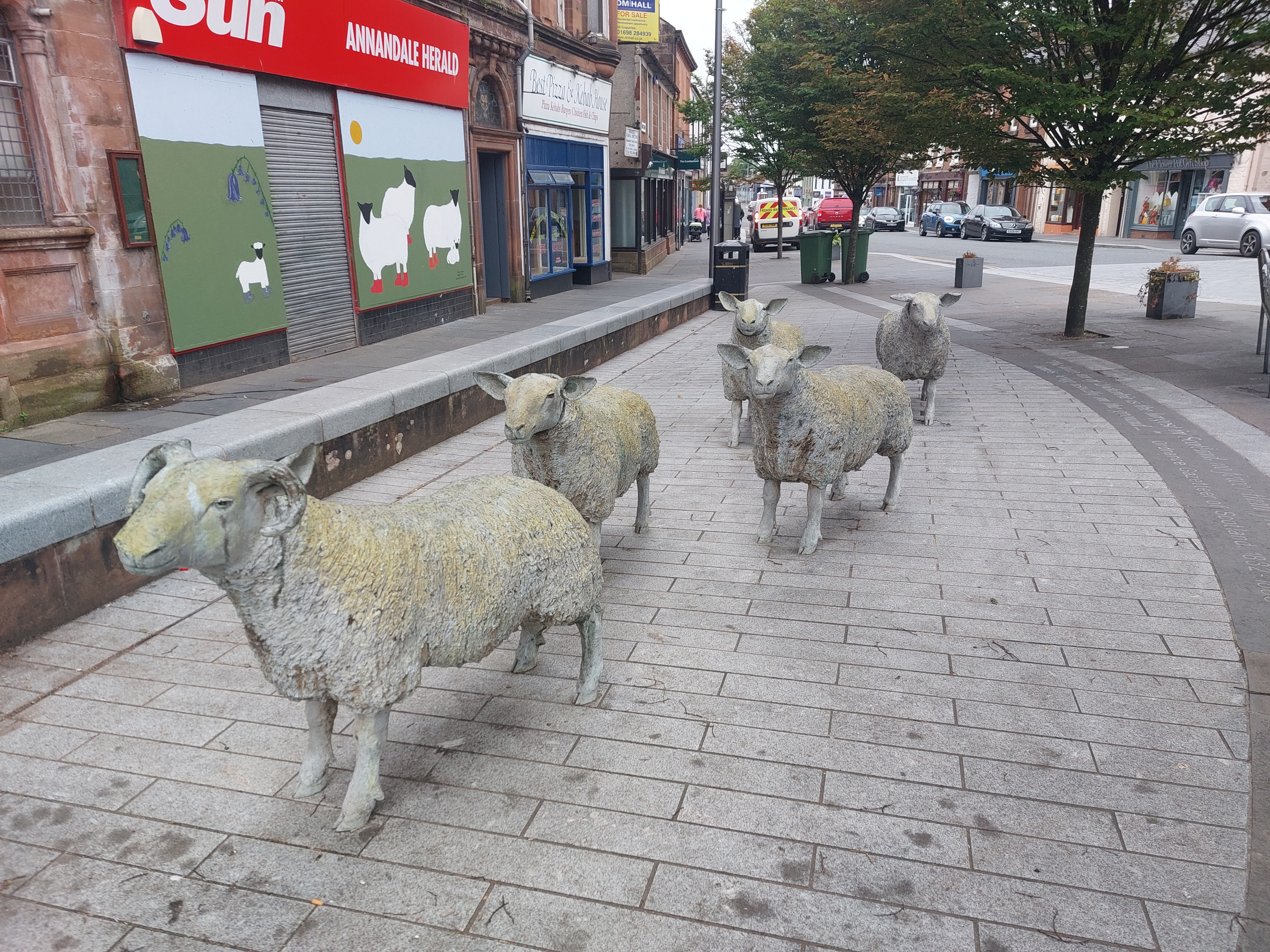 I’m telling you, sheep are everywhere around these parts, even in the middle of town! 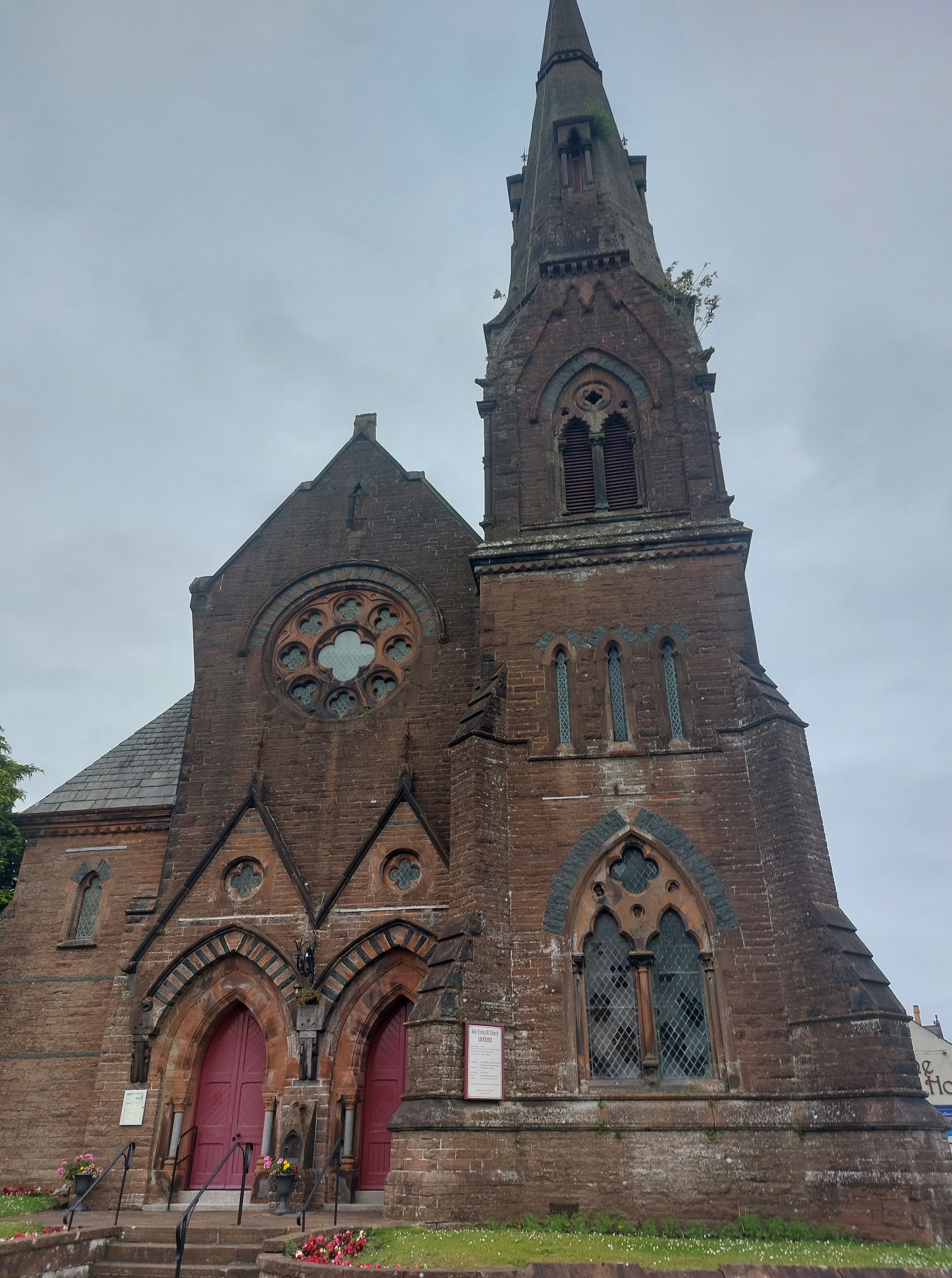 This beautiful church can be found in Lockerbie, not far from the sheep statues. 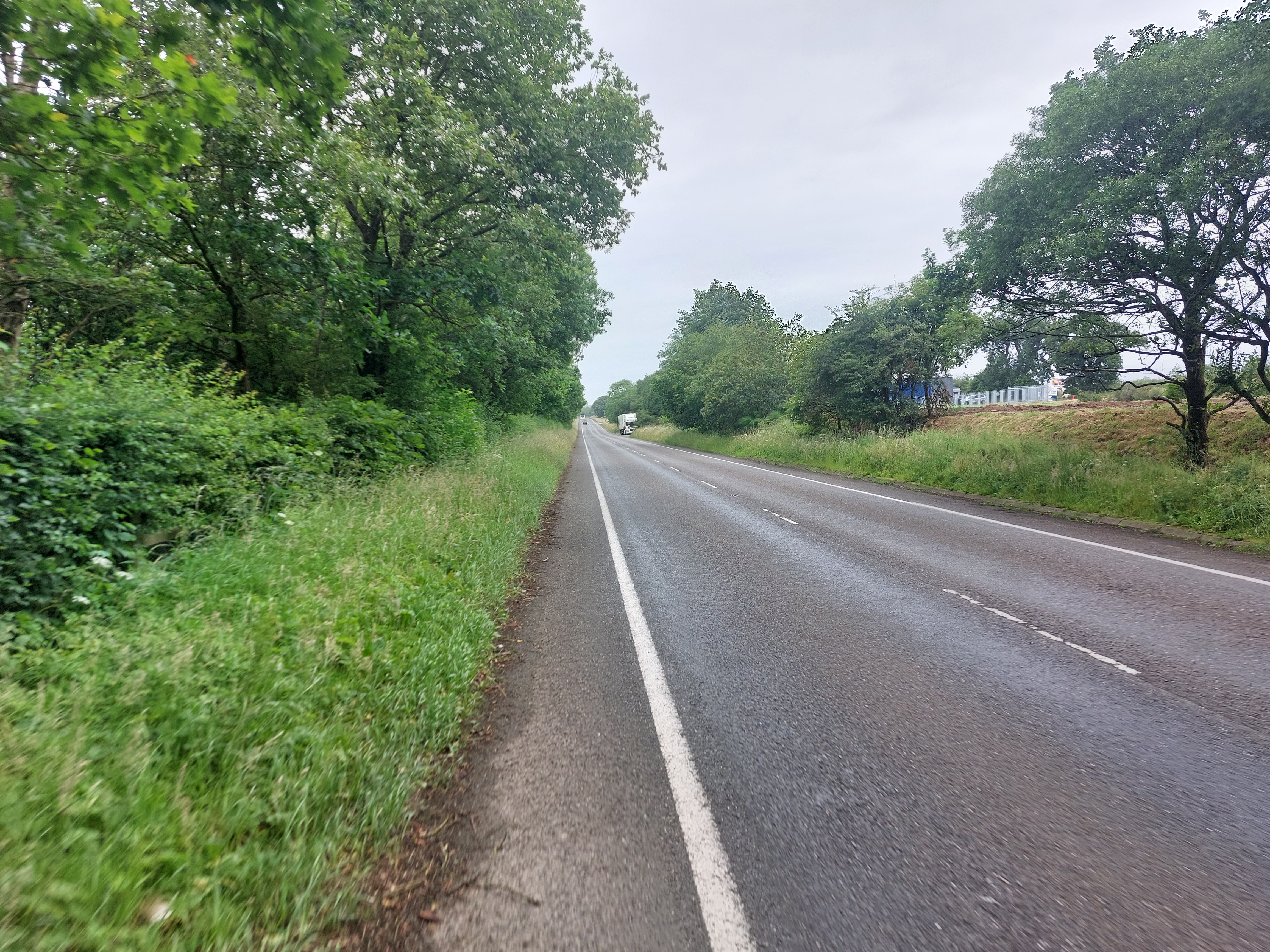 Riding along this side road (A74) that mostly parallels the motorway (highway) wasn’t too bad. The hills were much longer, but not as steep, and they actually had a bike lane/shoulder most of the way. Some of the time it was too rough to ride on, but at least they tried. 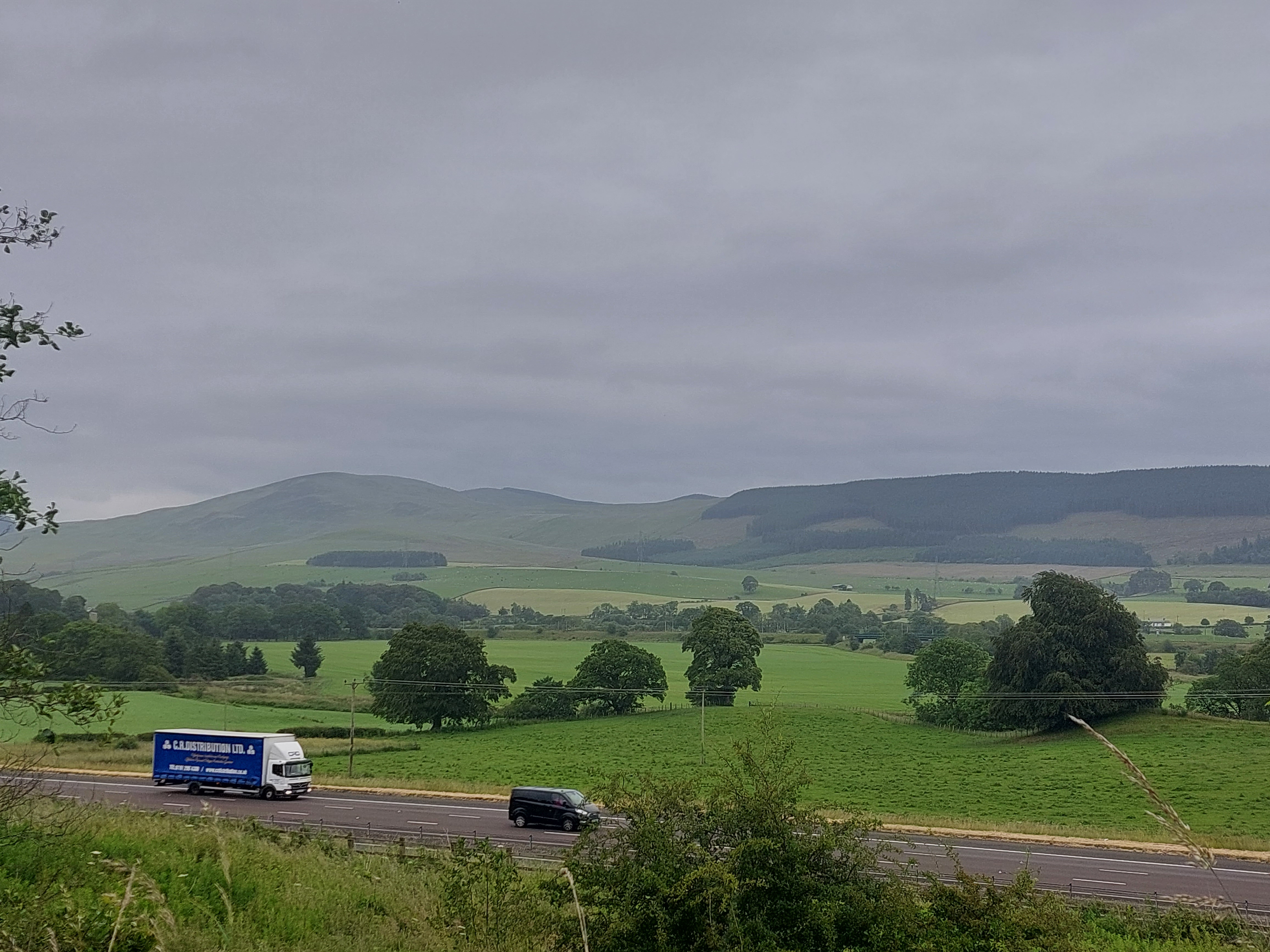 The terrain wasn’t as rugged as yesterday, and nice views were hard to come by with the rain, but here’s one nice stretch of land on the other side of the M74. 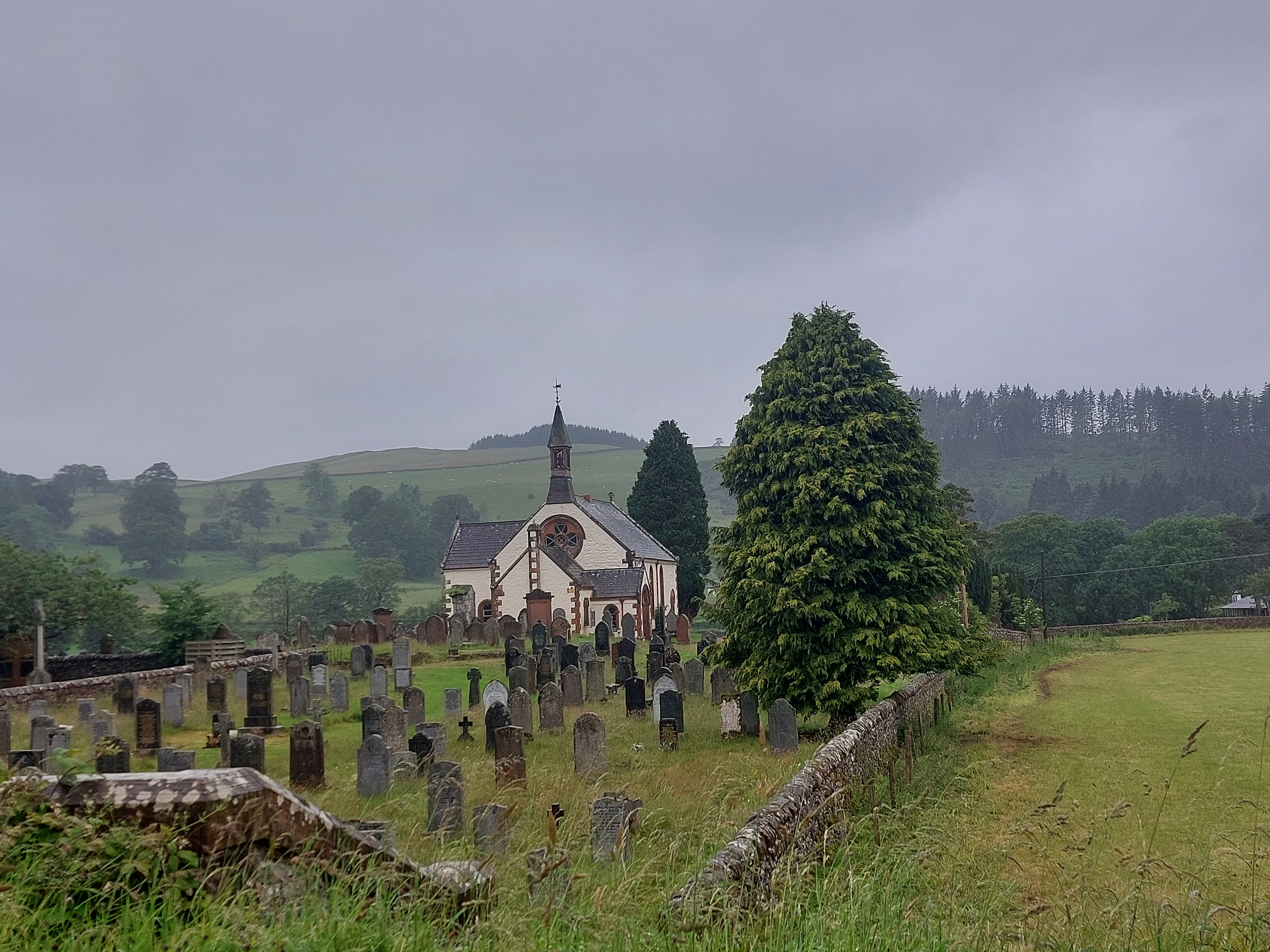 Another nice old church...I bet some of those headstones are pretty old.

I ran across this odd display partway along a section where a bike path had split off the main road. I’m not sure what it means, but there it is. (The word in blue is “Toulouse,” which is a town in France, I think...but what it’s has to do with this place, I have no idea.) 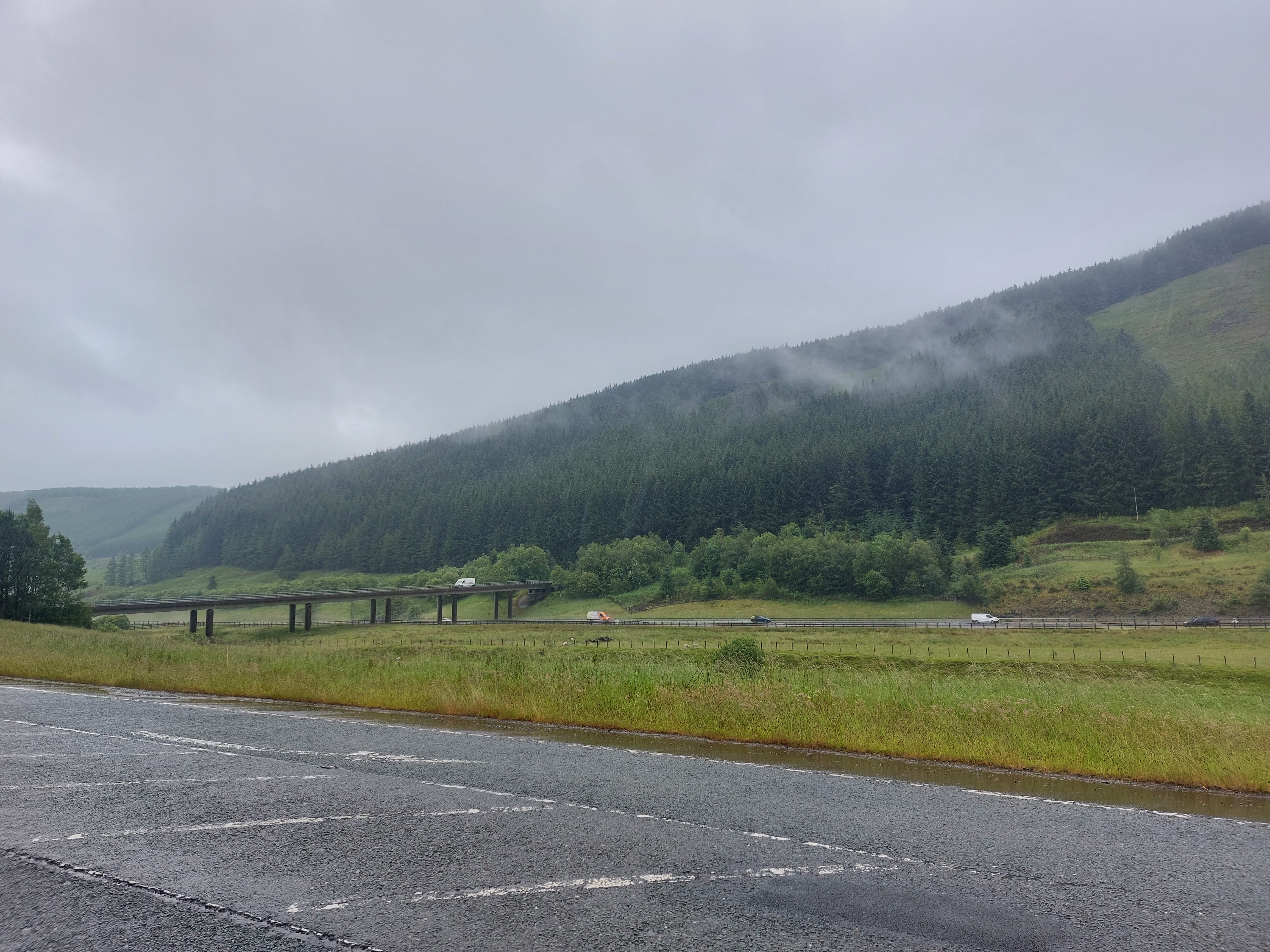 Another view of the scenery amid all the rain. Notice that the road is now some of that rough gravelly stuff that is so uncomfortable to ride on. Fortunately there were only a few areas like this, but they were definitely annoying. 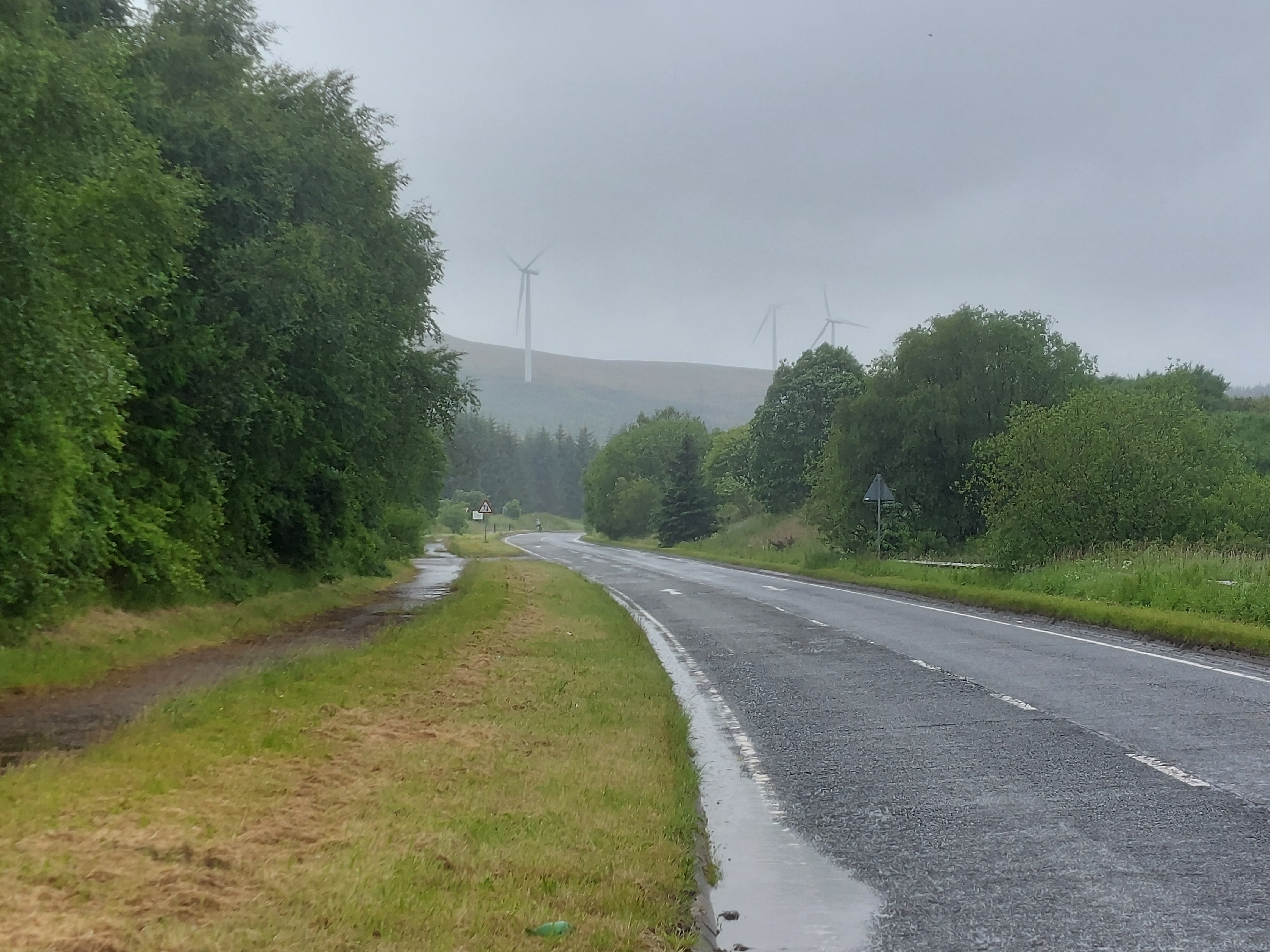 This is the area where I said goodbye to my impromptu traveling companion Harriet. She asked not to be included in a photo, for privacy reasons, but I hope she doesn’t mind this picture of her disappearing into the distance far ahead of me. 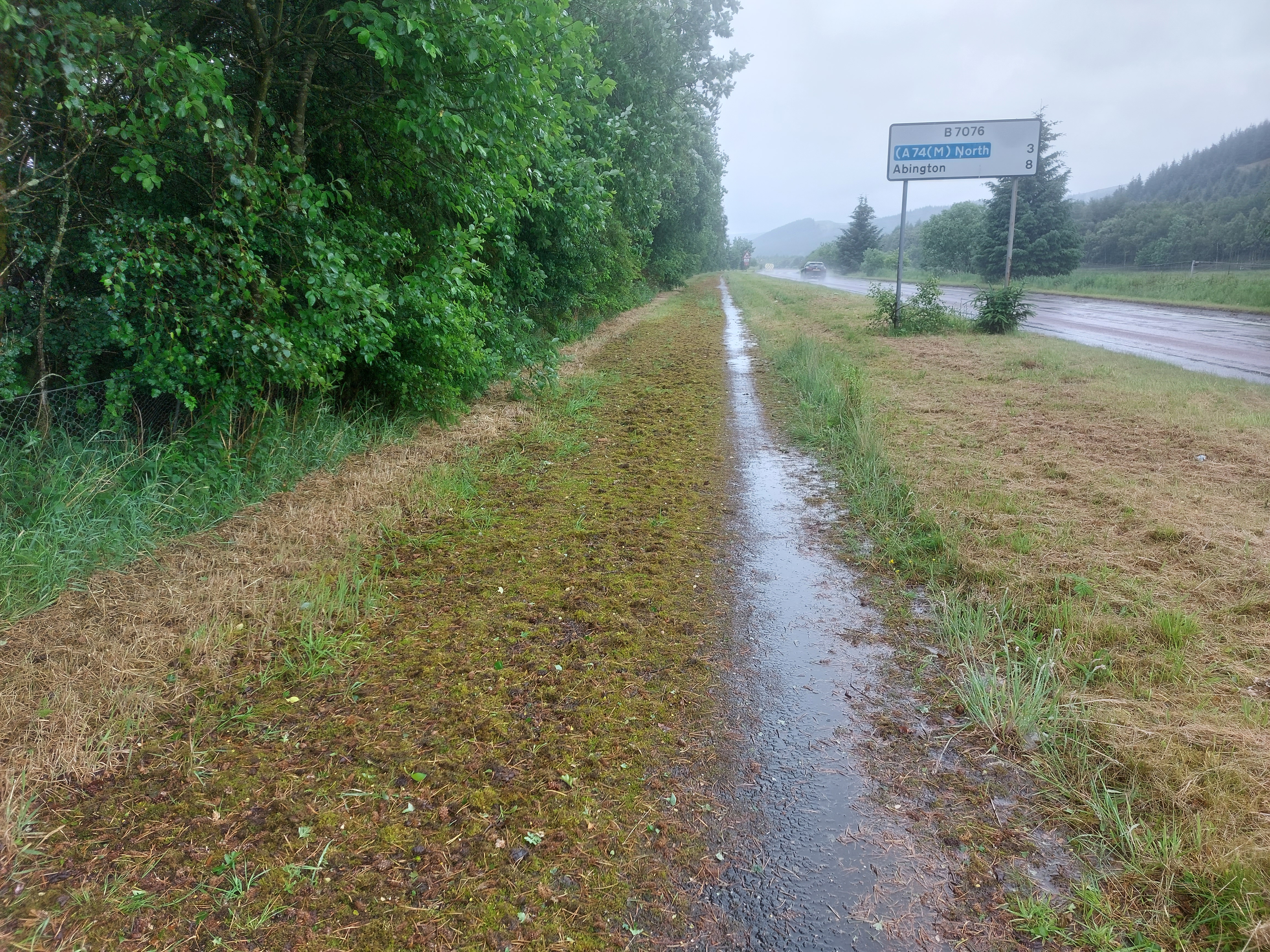 You can tell it rains here a lot because most of the bike path is covered with moss. 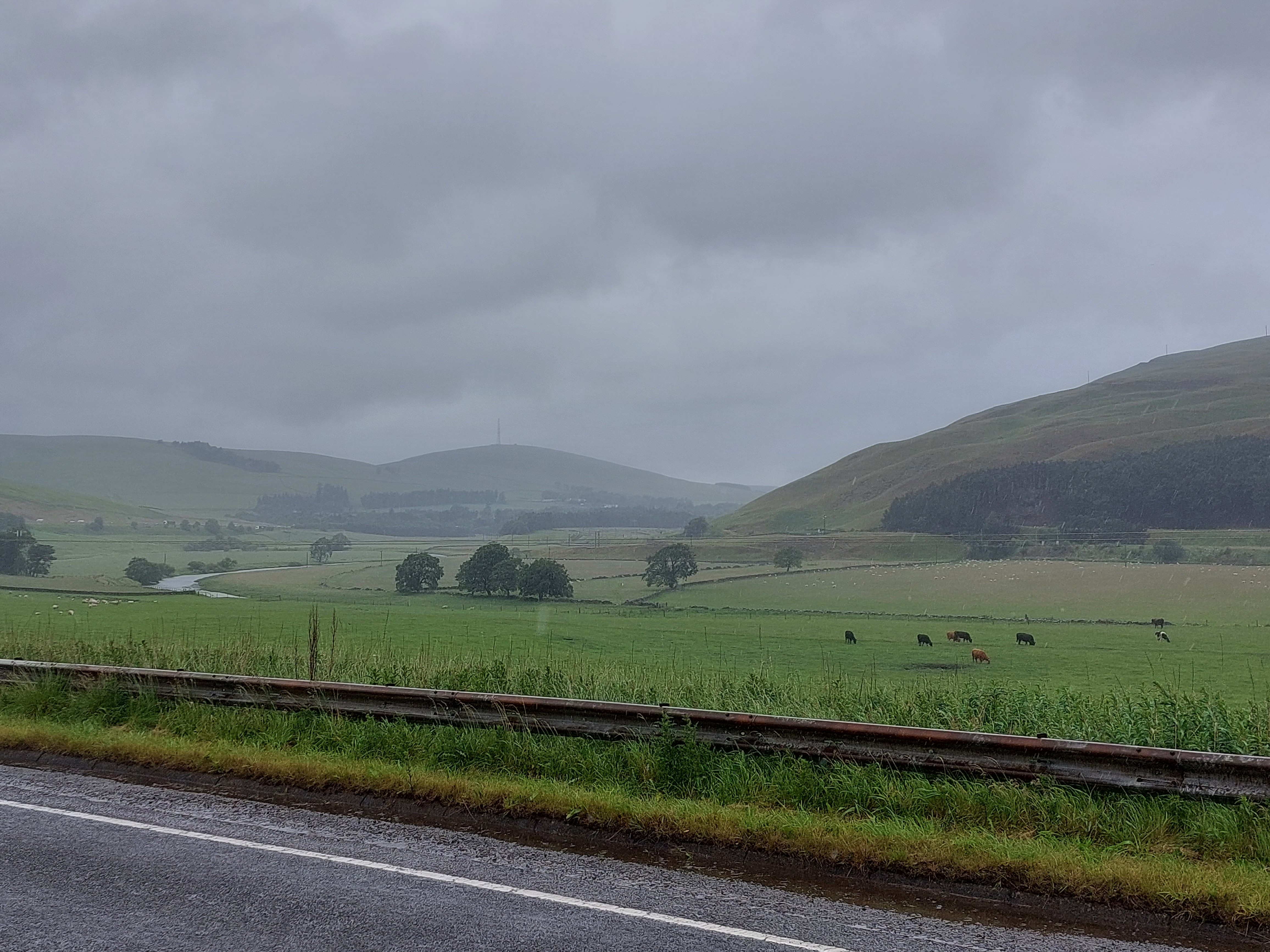 More nice scenery that would’ve looked a whole lot better without all the rain. 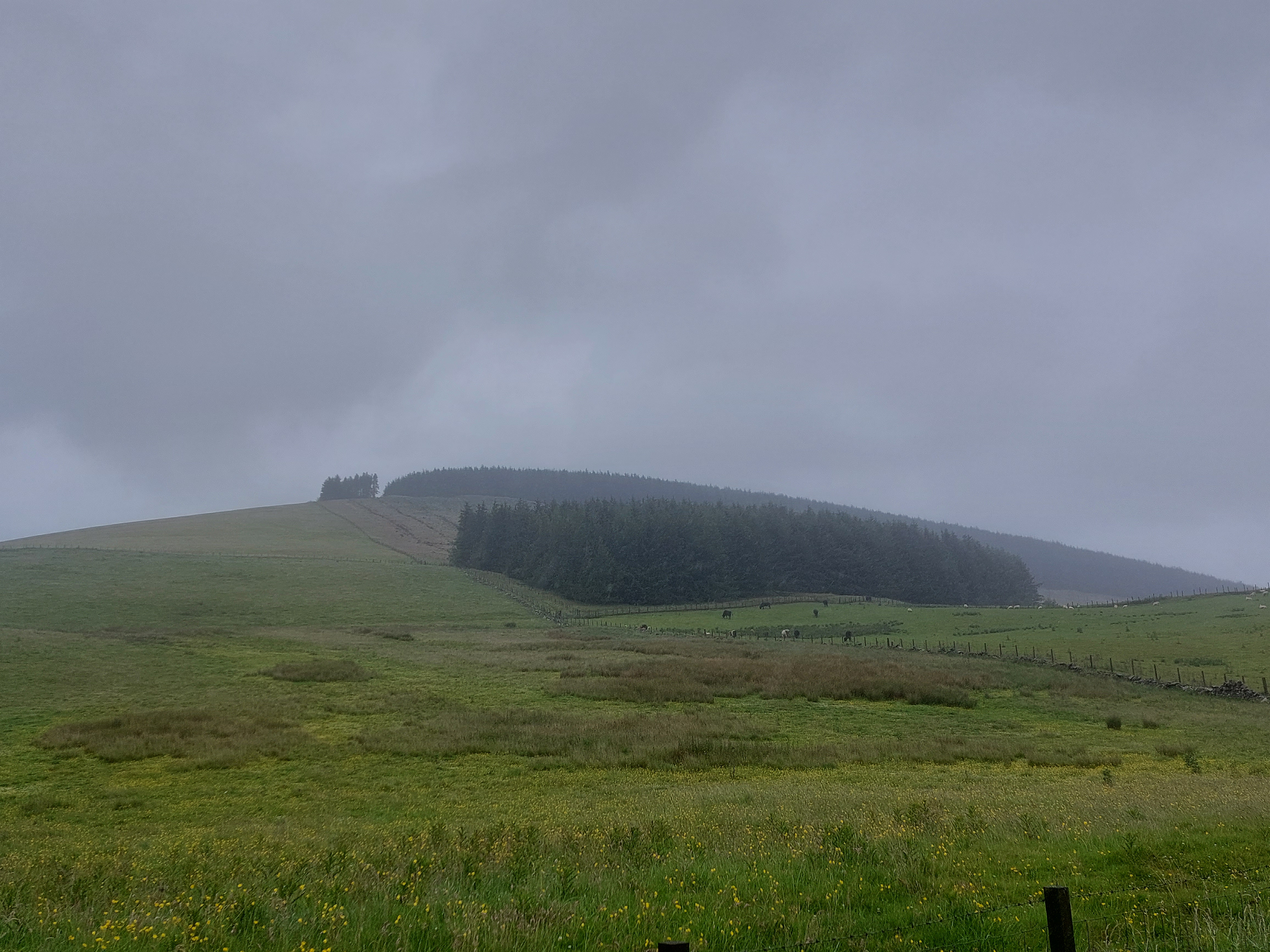 Same here. I like the way the forest is cut into regular shapes. 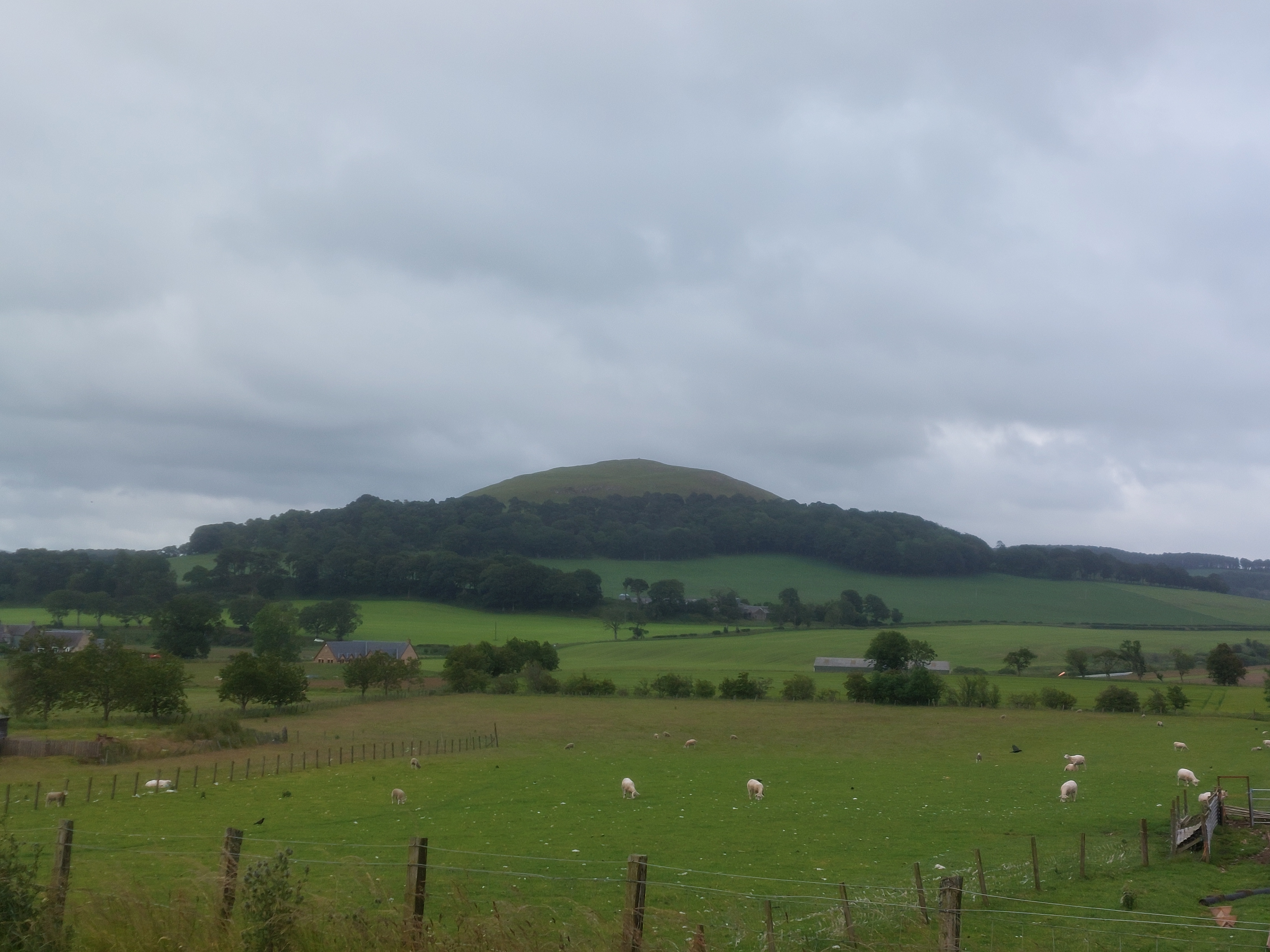 Now I’ve left the motorway behind and it’s on into farm country. 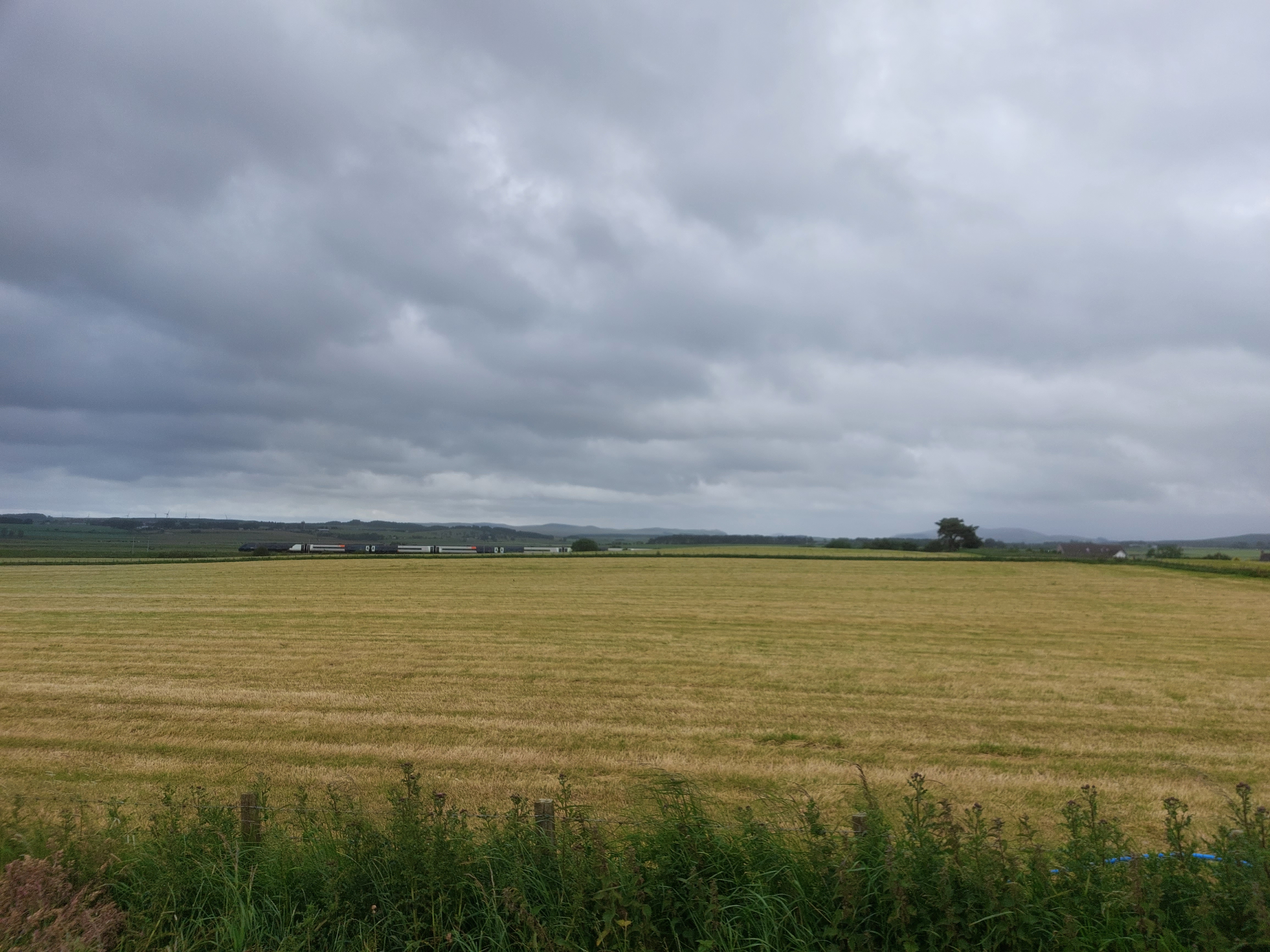 All day long I kept hearing trains zipping by me on a rail line off in the distance. Here I finally got a picture of one them before they were out of sight. These trains really move! 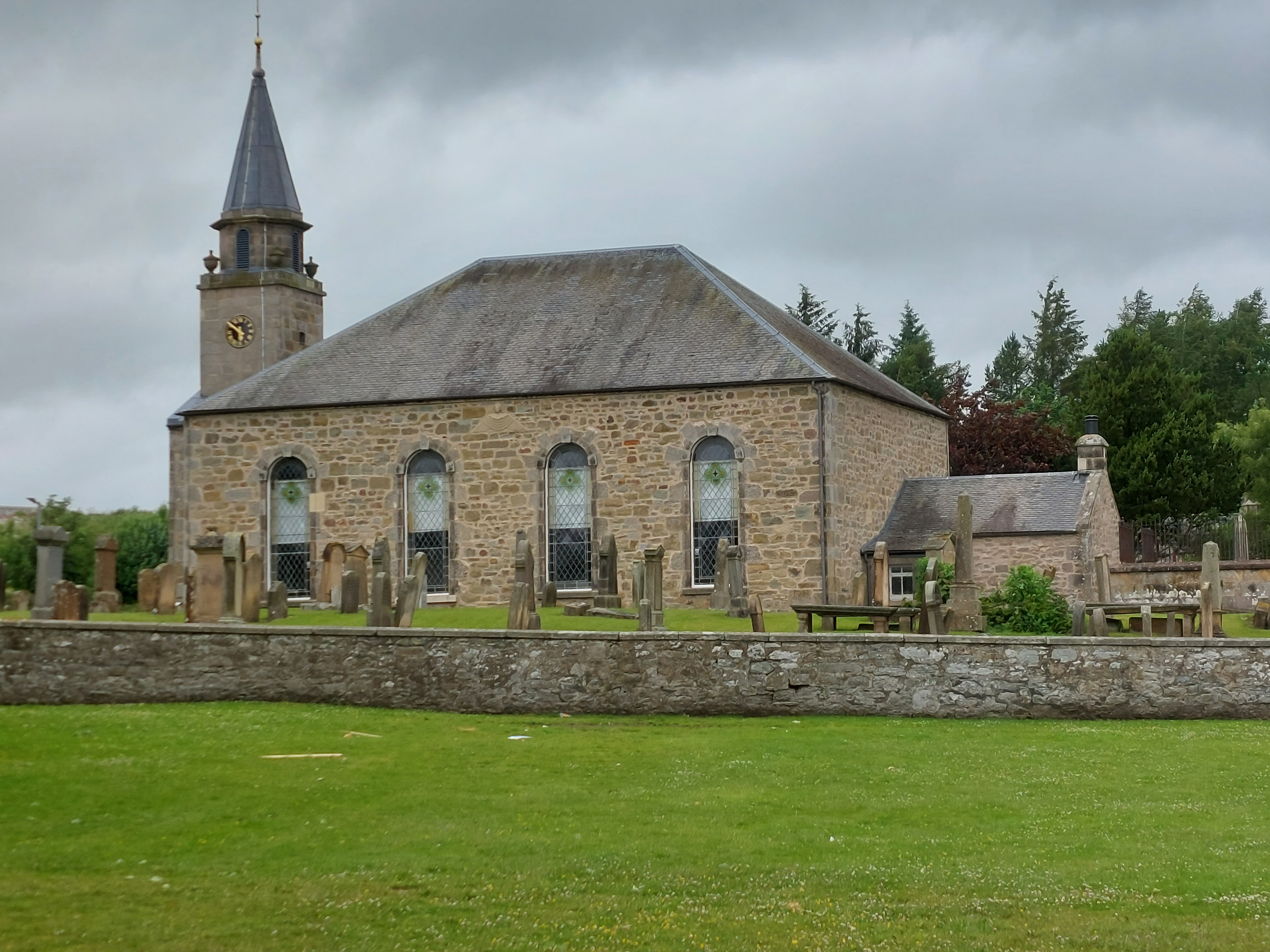 Yet another cool church, this one very close to my destination in Carstairs. 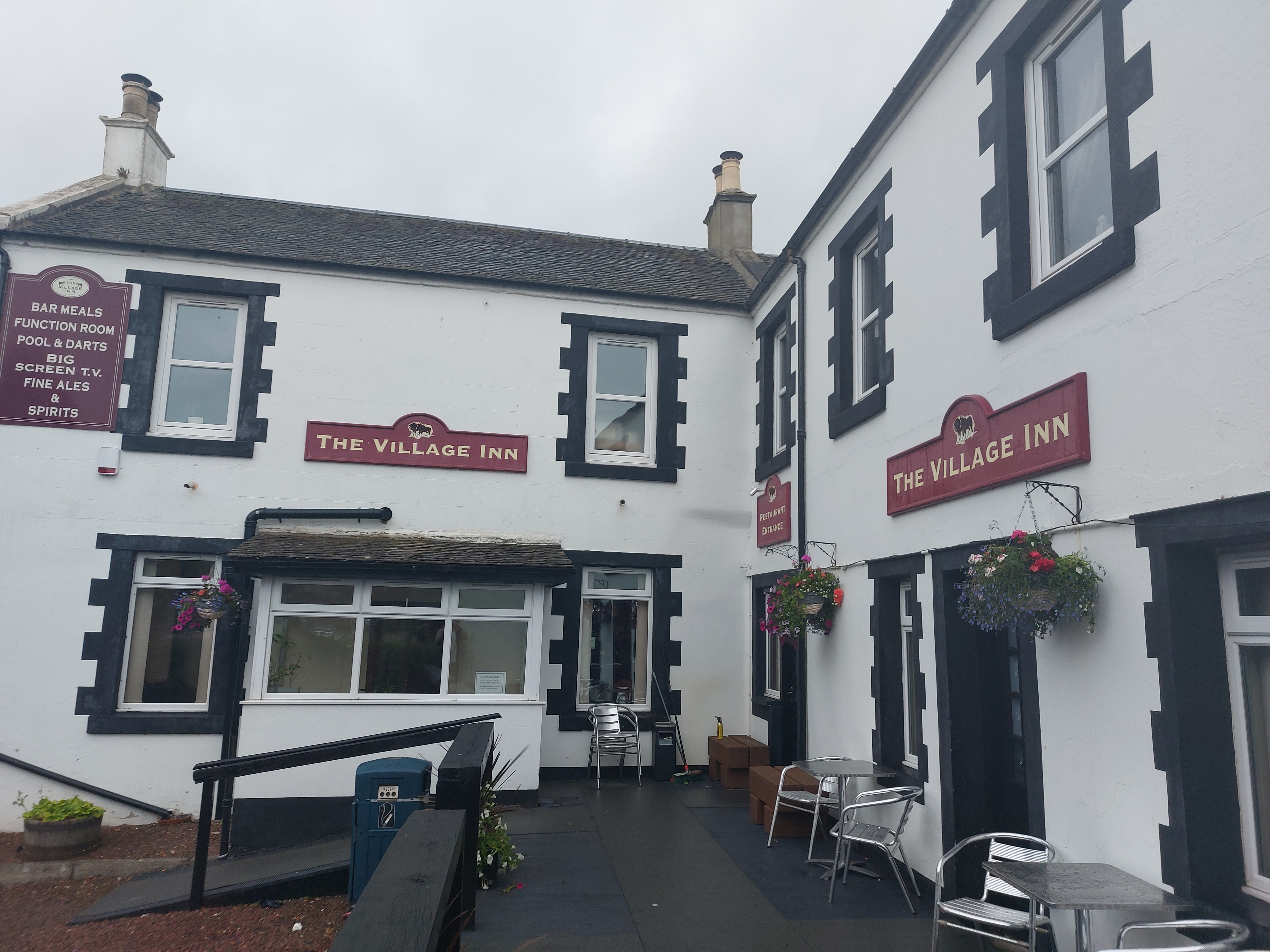 And here’s the hotel, another really nice one with a pub attached (or perhaps it’s a pub with a hotel attached?). These nice folks not only provided me with a bowl full of ice for my soft drink with dinner, but also did a load of laundry for me so I can leave tomorrow with fresh, dry clothes on. (They’ll stay dry maybe 10 minutes in the rain, but at least they’re clean!) Thanks, Village Inn!